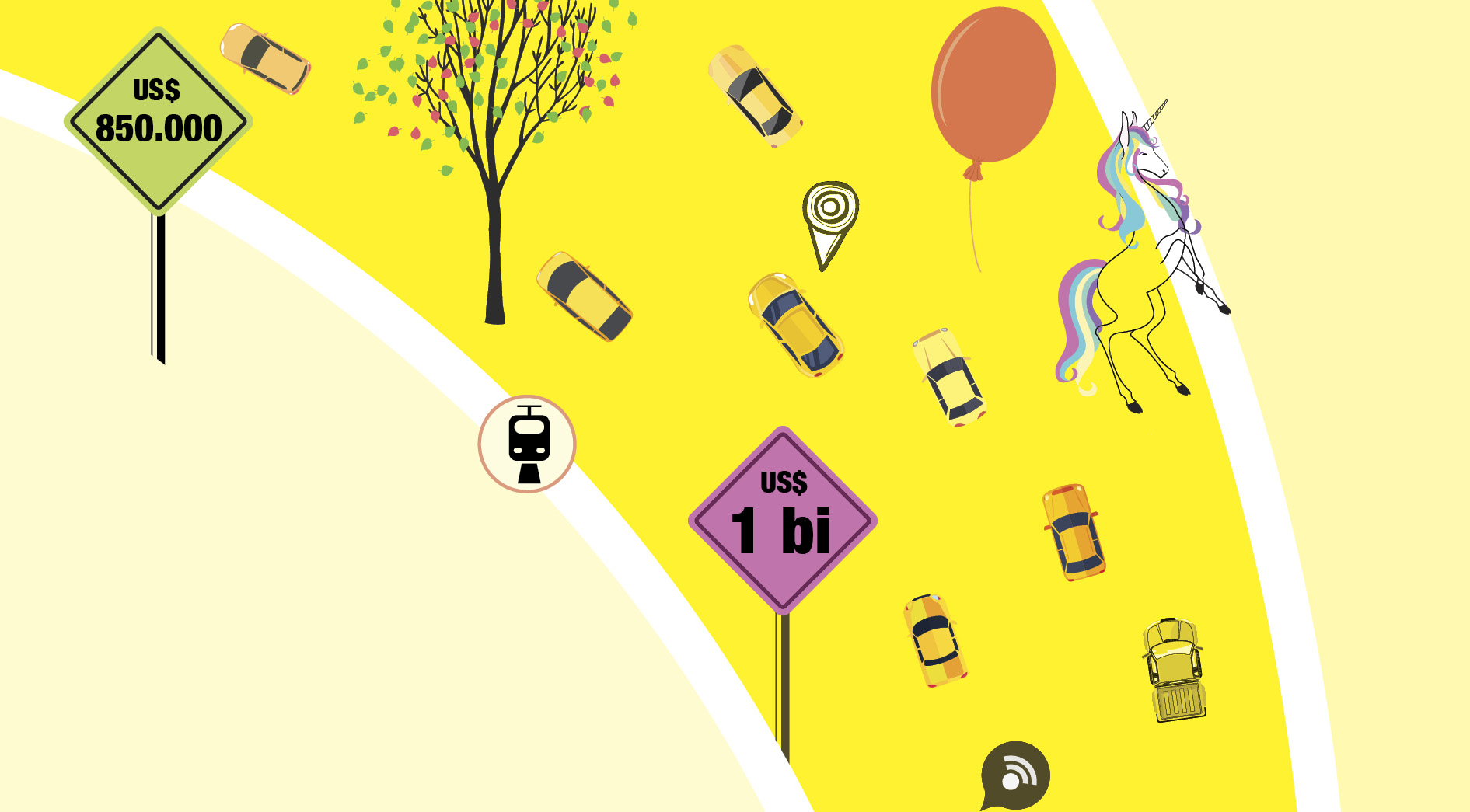 The Brazilian technology sector had a remarkable first quarter of 2018: in less than two months, two startups joined the elite Unicorn Club—the name coined by American investor Aileen Lee for the special group of technology companies valued at US$1 billion or more. In an article written in 2013, the investor estimated that only 0.07% of startups go on to accomplish this feat—almost as “rare and magical” as the mythological creature.

The first Brazilian startup to join the group was 99 Tecnologia, a taxi app founded in 2012. In January of this year, 99 was valued at US$1 billion and acquired by Chinese conglomerate Didi Chuxing, which first bought shares in the startup in January 2017 when it invested more than US$100 million.

In March, financial technology startup Nubank reached the same valuation after receiving US$150 million of new investment. Nubank was founded in 2013 to offer credit cards with no annual fees and low interest rates. The company was created by David Vélez, 36, a Colombian who graduated in engineering from Stanford University, USA; Edward Wible, 34, an American who studied computer science at Princeton University, USA; and Cristina Junqueira, 35, a Brazilian production engineering graduate from the University of São Paulo’s Polytechnic School (Poli-USP). All three have MBAs.

Vélez came to São Paulo in 2011 while working for Sequoia—a US venture capital fund—to look for investment opportunities in the Brazilian technology sector, but found no companies of particular interest. In 2013 he left his job to work on his idea for a new kind of credit card, managed solely through a mobile app. After receiving his first round of funding, he invited Junqueira, who had experience at Itaucard, and Wible, an expert on big data who was working in Argentina at the time, to join his venture. More than three million credit card users later, Vélez announced in March this year that Nubank was officially a unicorn company. There is already speculation that Movile, which owns popular applications such as iFood and PlayKids, could be next.

Others developed similar apps but did not achieve the same success. What made 99 different was its team, says Renato Freitas, one of the founders of the company

Vélez has regularly mentioned that Nubank was founded and prospered during the Brazilian economic crisis. And the adverse financial landscape of the last few years does not scare Renato Freitas, a mechatronics engineer who graduated from Poli-USP and one of the founders of 99 Taxis. “The interesting part of working with innovative projects is that they suffer very little from macroeconomic fluctuation. There is always space for new technology. With 99 becoming a unicorn and other startups following suit, I think Brazil will soon begin to attract more attention from foreign investors, which should be good for the startup sector,” he says.

According to Marcelo Caldeira Pedroso, a professor at the School of Economics, Business, and Accounting at USP (FEA-USP) and coordinator of the university’s Master’s Degree in Entrepreneurship, there are a number of factors that can lead to a startup becoming a unicorn: a proven business model that generates value; scalability, meaning a company’s capacity for rapid growth; and employees with skills that can give the company a competitive advantage. 99 is one of the companies that has fulfilled all of these criteria.

For a start, the founders of 99 were inspired by a business model that has already been successfully tested abroad. According to Freitas, he had the idea for ​​the company when Ariel Lambrecht, a mechatronics colleague at Poli-USP, traveled to Germany and used the world’s first mobile taxi app, MyTaxi. “We thought it would be a great idea to launch in Brazil because of the transportation challenges people face here: expensive public transportation, heavy traffic, etc.,” says Freitas. The initial investment was R$50,000.

The challenge of expansion has been overcome by an in-depth knowledge of the characteristics and needs of the target audience. “At the time, taxi drivers still used what we call feature phones rather than smartphones. We put a lot of time into teaching them which smartphones to buy, how to use them, and which apps could help them in their day-to-day work,” he says. Freitas says that he and Lambrecht searched for taxi points on Google Maps and then went around the city handing out flyers and raising awareness of their company practically every day in its first few months in 2012. “We already had our final application at that point—the only people who used it during the developmental stage were me and Ariel. But development has never stopped, we always have new things to add. This closeness with our customers allowed us to better understand them and we were able to incorporate their thoughts into the app. Surveys later showed that taxi drivers preferred our app because they considered it to be more intuitive and easier to use.”

But according to Freitas, neither the application itself nor the business opportunity was the main reason for the company’s success; that was down to the third factor mentioned by FEA’s Pedroso: the skills of the team. “Many companies were developing the same application at that time and had the same business opportunity, but did not achieve the same success. What made the difference at 99 was our team. We always seek to hire people with a passion for the challenges we face,” he says. The initial staff was composed of Lambrecht and Freitas, who focused on product development, and Paulo Veras, a former Poli-USP student who had experience creating startups, such as Tesla, one of the first companies specializing in website development and e-commerce, which he founded in the late 1990s.

“The three of us are very different, although we all studied the same degree. I’ve always looked after the technology and how it relates to the product. Paulo deals with the business side of things; finance, marketing, and human resources. And Ariel was mainly responsible for product, he was the ‘glue’ that held the different areas together and focused on how they affect our customers,” says Freitas. In 2017, 99 expanded its services: it began to accept private drivers, thus becoming a competitor of the US ride-sharing company Uber, which had been operating in Brazil since 2014. The company continued to grow and attracted the attention of Chinese conglomerate Didi Chuxing, whose intention was to surpass Uber in the global market by expanding into Latin America.

Today, under the control of Didi Chuxing, 99 connects more than 300,000 drivers to 14 million passengers in more than 400 cities and towns across Brazil. In February 2018, the company launched a new application, developed in partnership by the Brazilians and the Chinese. “More than 250 employees from the engineering and product teams in Brazil and China were involved in its development,” says João Costa, product leader at 99. “The app uses artificial intelligence to better distribute pickups, reducing the amount of time passengers have to wait for a driver by 20%,” he says.

After selling 99, Freitas and Lambrecht began a new project, this time in partnership with former Caloi CEO Eduardo Musa: a bicycle-sharing service where bikes are released via a mobile app. The service uses a “dockless” model that requires no bicycle stations; bikes are fitted with GPS trackers and can be left anywhere after use. The next user simply unlocks the bike using their cell phone to scan a QR Code printed on the frame.

The ecosystem has evolved, but startups are still too focused on the domestic market, says UFSCAR’s Marcelo Pinho

The company is called Yellow and plans to offer 20,000 bicycles for use in the city of São Paulo from July, with that number increasing to 100,000 in the near future. “We came up with the idea for ​​Yellow in China, where we used a similar service. We really enjoy seeing how companies have solved problems in other countries. But we do not want to simply copy other ideas. We developed our solution from scratch, learning from other companies and taking our own values into account,” says Freitas.

The success of these innovative new companies came as no surprise to those who study the world of business. According to Moacir de Miranda, head of the FEA department at USP, Brazil’s innovation ecosystem may finally be reaching maturity. “We are at last beginning to enter the 21st century,” he says. Miranda believes the market has now realized that strategic knowledge management is the key to survival. “Companies are investing in knowledge as a competitive advantage. What we were discussing 20 years ago is now starting to happen on a large scale.”

According to the researcher, greater involvement of the private sector is one of the main factors behind the increasingly favorable environment for startups in Brazil. “Ten years ago, incubators were almost exclusively university initiatives. Today, large corporations regularly fund incubators and coworking spaces, creating business units designed to produce disruptive innovations. By taking on this leading role, private companies have brought a new dynamic to the industry,” he says. The private sector’s interest in innovation grew alongside diminishing public investment as a result of the economic crisis.

“Public investment in innovation has dropped dramatically since 2014. Today it is at its lowest level in the last 10 years,” says Miranda, referring to data from the Brazilian Funding Authority for Studies and Projects (FINEP). According to the National science, technology, and innovation indicators 2017 report by the Brazilian Ministry of Science, Technology, Innovation, and Communications (MCTIC), private investment in R&D increased from R$37.4 billion to R$38.1 billion between 2014 and 2015, despite the economic crisis. The release, which is based on information from the IBGE Innovation Survey (PINTEC) and studies by the Organisation for Economic Co-operation and Development (OECD), provides an overview of innovation in Brazil.

According to Marcelo Pinho, an industrial and technological economics researcher from the Center for Exact Sciences and Technology at the Federal University of São Carlos (UFSCAR), universities play an important role in the development of future entrepreneurs, but technological strategy is part of the corporate experience. It is at this point that most Brazilian startups commit their “fatal error.” “Brazil’s tech companies do not usually develop global innovations or target markets outside the country,” he says.

Pinho notes that Brazilians generally operate in niches, which limits their growth to the markets that they were created in. These limitations are usually the result of a technology strategy that does not lead to primary innovation. “These companies often reproduce businesses that have already been developed abroad.” He is not so optimistic about the current state of the startup ecosystem in Brazil.

Pinho believes that because other obstacles to growth have been removed in recent years—through an increasing number of private funding options and new legislation that encourages partnerships between universities and businesses, such as the Brazilian Legal Framework for Science, Technology, and Innovation—there is a view that the startup environment in Brazil has evolved. However, technology companies are still primarily focused on the domestic market, a problem shared with other periphery economies.