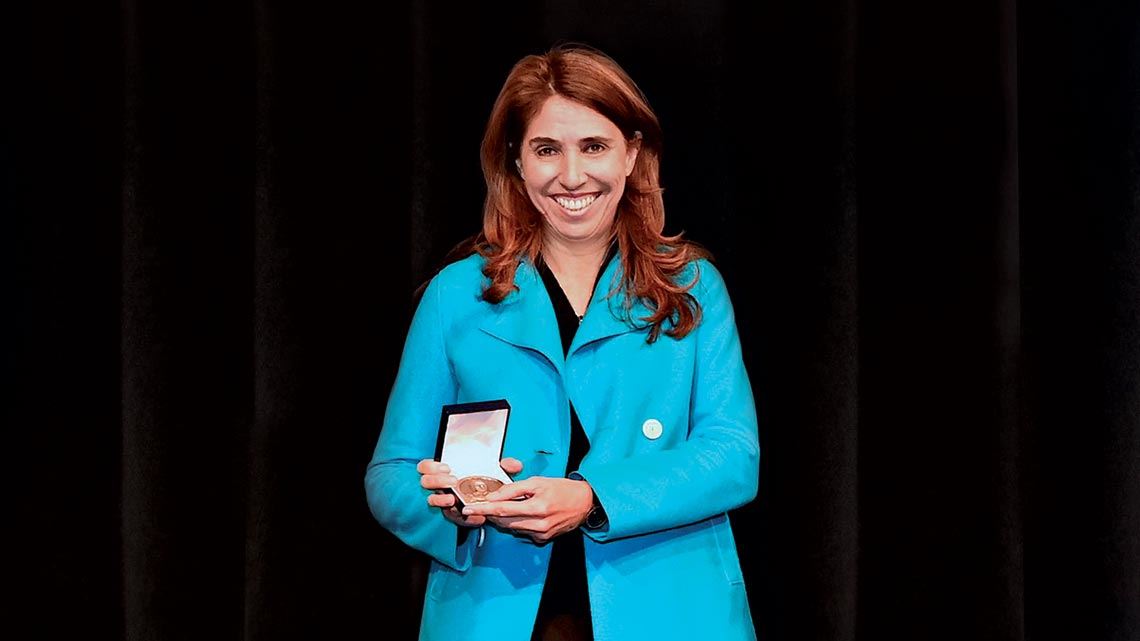 Cristiane de Morais Smith: awarded for her contributions to the theory of condensed matter systems

Internationally renowned for her work in quantum mechanics, physicist Cristiane de Morais Smith often compares the field to cubism, an artistic movement best known for the works of Spanish painter Pablo Picasso (1881–1973). “Both emerged at the beginning of the twentieth century and both offer multiple ways of observing the same object,” says the researcher, who uses this visual metaphor to describe the various perspectives of reality that characterize her field of knowledge.

Morais Smith has been teaching and leading a research group at the Institute for Theoretical Physics of Utrecht University in the Netherlands since 2004. In 2019, she won the Emmy Noether Award from the European Physical Society, which is based in Mulhouse, France, and represents 42 scientific societies. The award recognized her contributions to the theory of condensed matter systems and ultracold atoms to unveil novel quantum states of matter. “I am honored to receive this award, among other reasons because the scientist whose name it bears [1882–1935] made great contributions to physics, despite being a mathematician.”

Morais Smith’s aptitude for physics was first noticed when she was 13 years old, during a class on kinematics at school in her hometown of Paraguaçu Paulista in the state of São Paulo. “I managed to solve a problem that was considered difficult for my age group, which the teacher was very excited about. It was then that I  decided I wanted to learn more,” she says. In 1981, when she started her undergraduate degree in physics at the University of Campinas (UNICAMP), Morais Smith was intrigued by quantum mechanics after attending classes by Amir Caldeira, a physicist from Rio de Janeiro. “I fell in love with the theory, which offers a new concept of matter, capable of describing strange phenomena that happen on an atomic scale.”

During her master’s degree in quantum mechanics at UNICAMP, which she completed in 1989, Morais Smith’s work involved describing dissipative quantum systems. It was during her PhD, which included a period at the Swiss Federal Institute of Technology in Zurich (ETH Zurich), that the physicist’s international career took off. Her thesis, defended in 1994, described the dissipative dynamics of vortices in high-temperature superconductors.

As well as using cubism as a metaphor for a field that most people see as highly abstract, Morais Smith also likes to say that she studies electron sociology. “The way these particles interact is comparable to human beings in society. Together, electrons behave differently than when they are alone,” she explains.
“In quantum mechanics, the electron is no longer just a marble that hits another and then disperses. In some situations it acts like a wave, spreading into space,” she says.

In addition to studies using quantum simulators and graphene, considered an excellent conductor of electricity, the research group led by Morais Smith was responsible for creating the first quantum fractal, a structure that could reveal new types of electron behavior. Defined as standardized shapes that recur to produce an image of the whole, fractals are common in nature, but difficult to find on a quantum scale. “The discovery offers new ways of studying quantum wires and the intermediate dimension of electronic systems,” she adds.