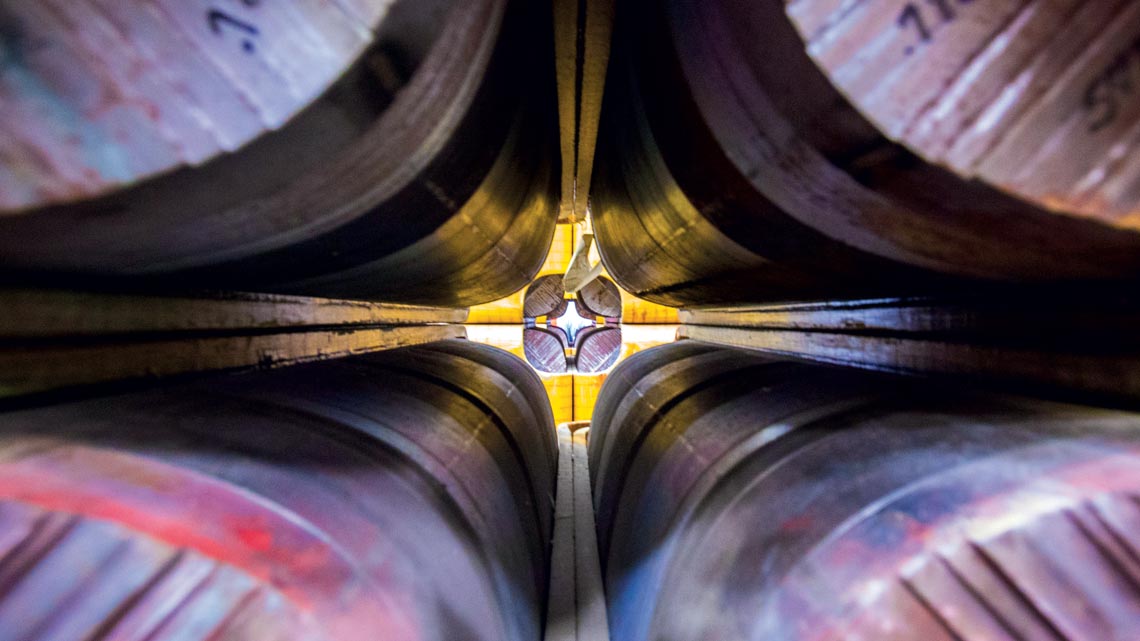 The muon detector from the Muon g-2 experiment at Fermilab, which found evidence of excessive magnetic force in these particles

First discovered in 1936 during observations of cosmic radiation, muons are elementary particles very similar to electrons, but with 207 times greater mass and an average lifespan of a mere 2.2 millionths of a second. Although discovered 85 years ago, muons have become the focus of particle physicists in recent months due to apparent anomalies detected in two large, distinctly different international experiments. One study was conducted at the world’s largest particle accelerator, the Large Hadron Collider (LHC) at the European Center for Nuclear Research (CERN). Scientists there found that muons formed at a different rate than electrons as heavier particles disintegrated. According to the theory most widely accepted by physicists, the two particles should be produced in the same proportion. In the other study, conducted at the Fermilab accelerator in Chicago, USA, the muons showed a higher degree of magnetic force than expected.

Both findings seem to contradict the predictions of the Standard Model, the dominant theory in physics that, for half a century, has explained the interactions between known forces—with the exception of gravity, and the constituent particles of matter. When there is a distinct possibility that this type of discrepancy is a real phenomenon rather than a measurement error or statistical fluctuation, physicists wonder if they’re faced with a discovery that makes it necessary to revise the model to include an unpredicted new force or particle, perhaps occurring due to some overlooked quantum interaction. This isn’t the first time the Standard Model has been put to the test. Neutrinos—particles without electrical charge that are extremely abundant in the universe—should not have mass, according to the model. But today it’s known that they do have some mass, albeit an exquisitely small amount. Other issues not explained by the theory are the existence of dark matter and dark energy, the two most abundant components of the cosmos, and the also unexplained, apparent predominance of matter over antimatter.

Muons became the focus of discussion among physicists in March, when the LHCb experiment—one of four large projects carried out at CERN, on the Franco-Swiss border near Geneva—released new results. In an article available as a preprint, (not yet peer-reviewed or accepted for publication in a scientific journal), the research team reported that the decay of particles originating from the collisions of protons inside the accelerator led to the formation of 15% less muons than electrons. Technically, this discrepancy is described as a violation of “lepton flavor universality,” predicted by the Standard Model.

Leptons are particles without strong interaction, with spin 1/2. Spin is an intrinsic property of subatomic particles that is associated with interaction with magnetic fields. The types (or flavors, in particle physics jargon) of known leptons are electrons, muons, taus, and the three distinct forms of neutrinos. “The concept of lepton flavor universality means that all the processes that lead to the formation of particles of this type, such as electrons and muons, must occur in the same proportion,” explains Brazilian experimental physicist Rafael Silva Coutinho, from the University of Zurich, who is a member of the LHCb’s international collaboration. “If our experiment is correct, we will need some new physics to explain this result.” The LHCb is an international collaboration that has around 1,500 members from 89 institutions in 19 countries. Twelve Brazilian researchers from three national institutions—the Federal University of Rio de Janeiro (UFRJ), the Brazilian Center for Physical Research (CBPF) and the Pontifical Catholic University of Rio de Janeiro (PUC-Rio)—are part of the research team.

Put simply, the experiment consists of producing collisions between beams of protons accelerated to nearly the speed of light, and observing which particles form after the collisions. One of these particles is the B meson, which has an unstable lifespan, and decays in fractions of a second. As they disintegrate, B mesons give rise to muons and electrons, among other particles. Detectors installed in the particle accelerator capture the intensity of particle formation. According to the Standard Model, the same number of electrons and muons should result from such a process. In practice, the experiment found 15% fewer muons than electrons. “Muons are relatively easy to detect,” explains physicist Murilo Rangel from UFRJ, part of the LHCb team. “Our measurement is highly unlikely to be incorrect.”

The study on muons conducted at Fermilab was published in April in the journal Physical Review Letters and is part of the Muon g-2 experiment, an international collaboration that brings together 200 researchers from 35 institutions in seven countries (without participation from Brazilian institutions). Their goal is to reconstruct and refine a 2001 study conducted at Brookhaven National Laboratory in New York State, which measured for the first time an excess of muon magnetism. The main component of the equipment used at Brookhaven, a 15-meter-diameter superconducting magnetic ring, was reinstalled at Fermilab so that the experiment could be run again. By colliding protons, the Muon g-2 produces a beam of muons that circulates around the ring at close to the speed of light and interacts in its vacuum with large magnetic fields. Physicists then measure what’s known as the muons’ magnetic moment, a property that gives these particles spin and behavior similar to a small bar magnet. This parameter is calculated by the g-factor, a value very close to but greater than 2 (hence the name given to the experiment, Muon g-2). 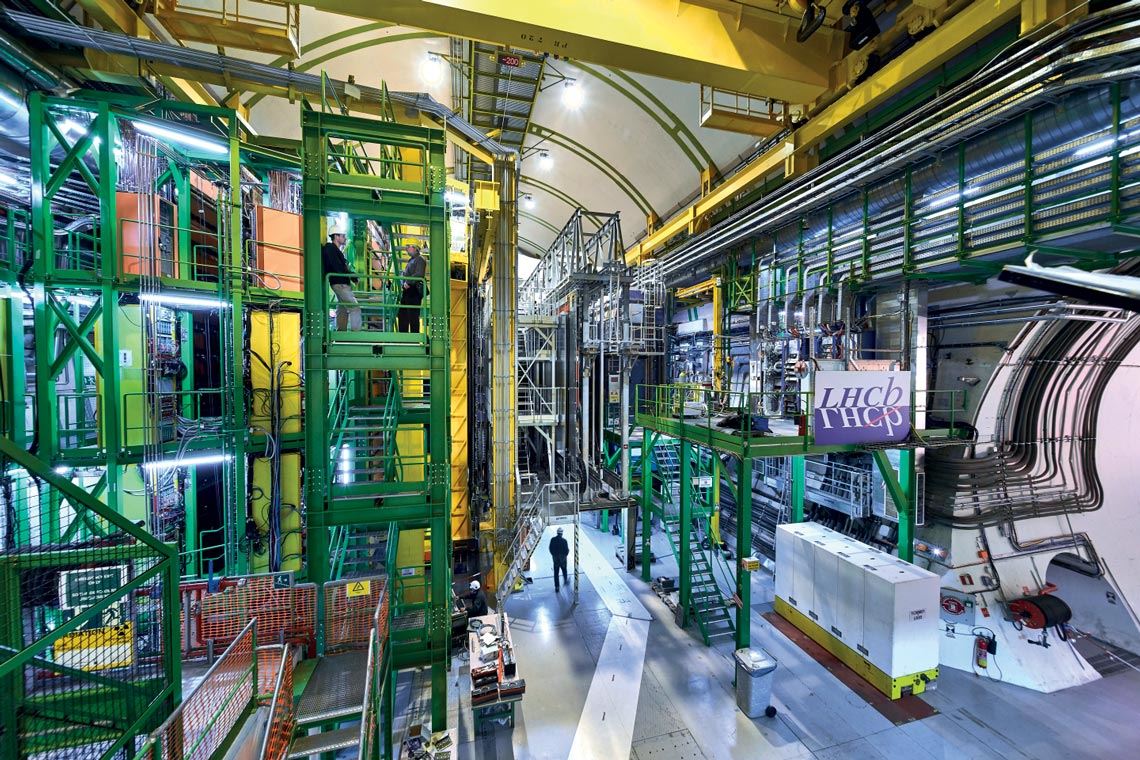 The LHCb experiment facilities in CERN, where a possible anomaly in the formation rate of muons was measuredMaximilien Brice / CERN

The experiment at Fermilab measured this parameter and found, as did the scientists at Brookhaven, higher values for the magnetic moment of the muons. Physicist Renee Fatemi from the University of Kentucky, in the United States, who is a coordinator of the Muon g-2 simulations stated in a press release, “[What] we measure reflects the interactions of the muon with everything else in the universe. But when the theorists calculate the same quantity, using all of the known forces and particles in the Standard Model, we don’t get the same answer.” Although it seems counterintuitive to the layperson, a vacuum is not synonymous with a purely empty space in quantum physics. It is populated by virtual particles, which, due to fluctuations in the quantum world, appear and disappear in pairs almost instantaneously, and are difficult to detect. The hypothetical interactions of these virtual particles with muons could be fundamental to understanding the two anomalies.

At this time it’s not possible to know what unknown forces or particles could explain the two measurements that don’t follow the Standard Model predictions. “These possible anomalies might—or might not—be correlated, and they may be the result of the same or several quantum phenomena,” comments physicist Renata Zukanovich Funchal, from the University of São Paulo (USP), who studies theories that may go beyond the Standard Model, with a project funded by FAPESP. Nonvirtual, but as yet undiscovered particles could also be behind the violations of the Standard Model being observed in the muons. “Hypothetical particles such as leptoquarks and Z bosons may be candidates to explain these anomalies if their existence is in fact confirmed in the future,” comments Brazilian theoretical physicist Olcyr Sumensari, from the University of Paris-Saclay.

The two flavors of apparent violations of the Standard Model, both the one at the LHCb and at the Fermilab, had already been detected in past experiments, but with only a relatively low degree of statistical certainty. The new measurements are indeed more robust, although they haven’t yet reached the degree of precision considered the gold standard in physics. Normally, when data is accurate to 5 sigma or 5 standard deviations, physicists say there has been a discovery. In this case, the probability of an error is 0.00006%, or around 1 in 3.5 million. The LHCb data has a standard deviation of 3.1 sigma, or just over a 0.2% probability of being wrong. Findings with this level of confidence are considered evidence, but not yet a discovery. The magnetic anomaly observed in the muons, when added to the data produced at Fermilab and Brookhaven, presents an even greater degree of precision—4.2 sigma—that is, one chance in 40,000 of being in error.

As the LHCb and Muon g-2 research advances over the coming years, doubts about whether the two anomalies are real or the result of measurement errors should be dispelled. At the moment, the CERN accelerator is in a scheduled shutdown and is not expected to resume operation until April 2022. Fermilab may generate some news before that date, as more than 90% of the data produced in the Chicago muon experiment has yet to be analyzed. “It’s also possible that in the coming months the Belle II, a Japanese experiment competing with the LHCb, will release some measurements,” Zukanovich says.