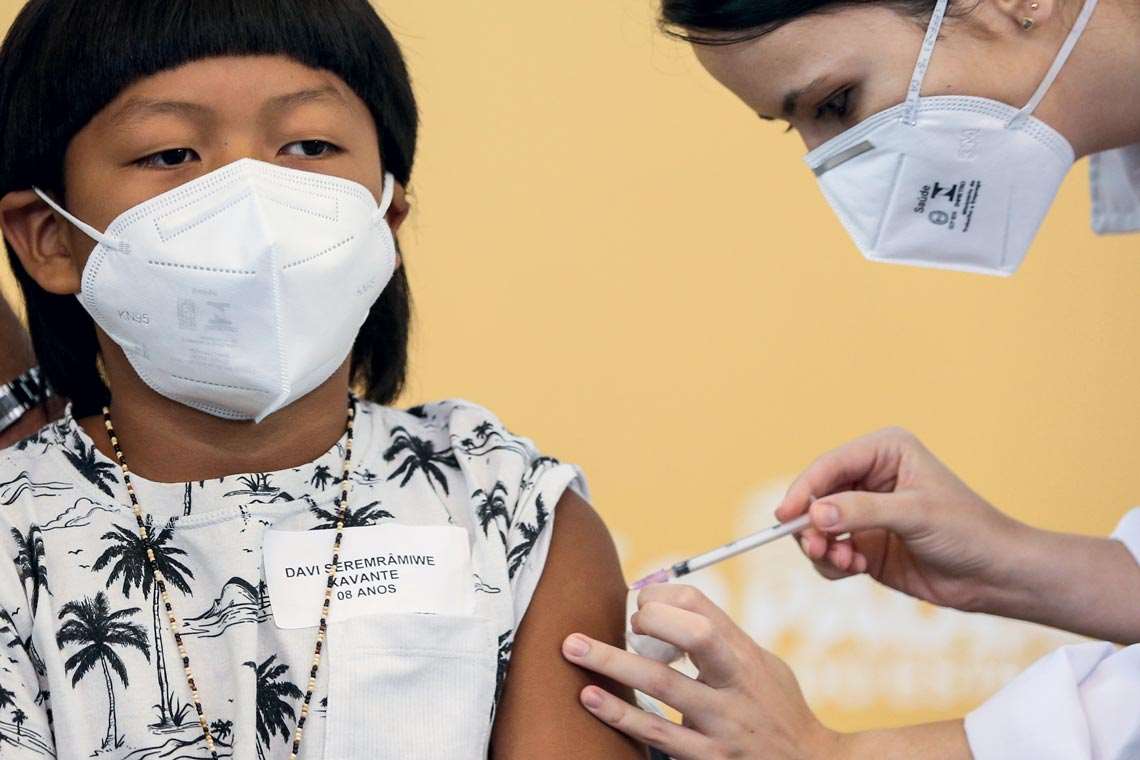 On January 14, Davi Seremramiwe, the son of a Xavante chief from Mato Grosso, was the first child aged 5 to 11 to be given a COVID-19 vaccine in Brazil. At the Hospital das Clínicas of the University of São Paulo (HC-USP), the 8-year-old boy, who has a disease that makes it difficult for him to move, received a 0.2 milliliter (ml) dose of the Pfizer-BioNTech vaccine, approved for pediatric use in Brazil by ANVISA in mid-December 2021. The infant dose contains the equivalent to one-third of the adult injection. In the USA, the Pfizer-BioNTech vaccine was approved for use in this age group in October, and the EU recommended approval the following month. The manufacturer recommends an interval of three weeks between the first and second dose. The Brazilian Ministry of Health, however, extended this to eight weeks due to supply shortages.

In Brazil, the immunization drive for children aged 5–11, the last age group to receive the COVID-19 vaccine, begins in a new and critical phase of the pandemic. The highly transmissible Omicron variant, which has more than 50 mutations and was discovered in South Africa in late November 2021, has quickly become the dominant form of the virus. Everywhere it has been found, Omicron has taken the place of Delta, the previously predominant variant, and caused a record number of infections in many countries, including the USA, UK, Germany, Australia, Italy, Brazil, and others.

On January 12, 3.5 million cases of COVID-19 were confirmed worldwide, the highest number ever recorded in a single day, according to the World Health Organization (WHO). “Delta took months to become the dominant variant, but Omicron achieved it in a matter of weeks,” says Fernando Spilki, a virologist from Feevale University in Rio Grande do Sul and coordinator of Brazil’s National COVID-19 Omics Network (Rede Corona-ômica BR).

According to data from the Info Tracker digital platform, created in April 2020 by five mathematicians and computer scientists from São Paulo State University (UNESP), USP, and São Paulo State Online University (UNIVESP), SARS-CoV-2’s transmission rate (Rt) in Brazil on January 19 was 1.7, the highest ever recorded. What this means is that every 10 people infected passed the virus onto another 17, on average. A pandemic stops growing and starts decreasing in scale when the Rt is below 1. 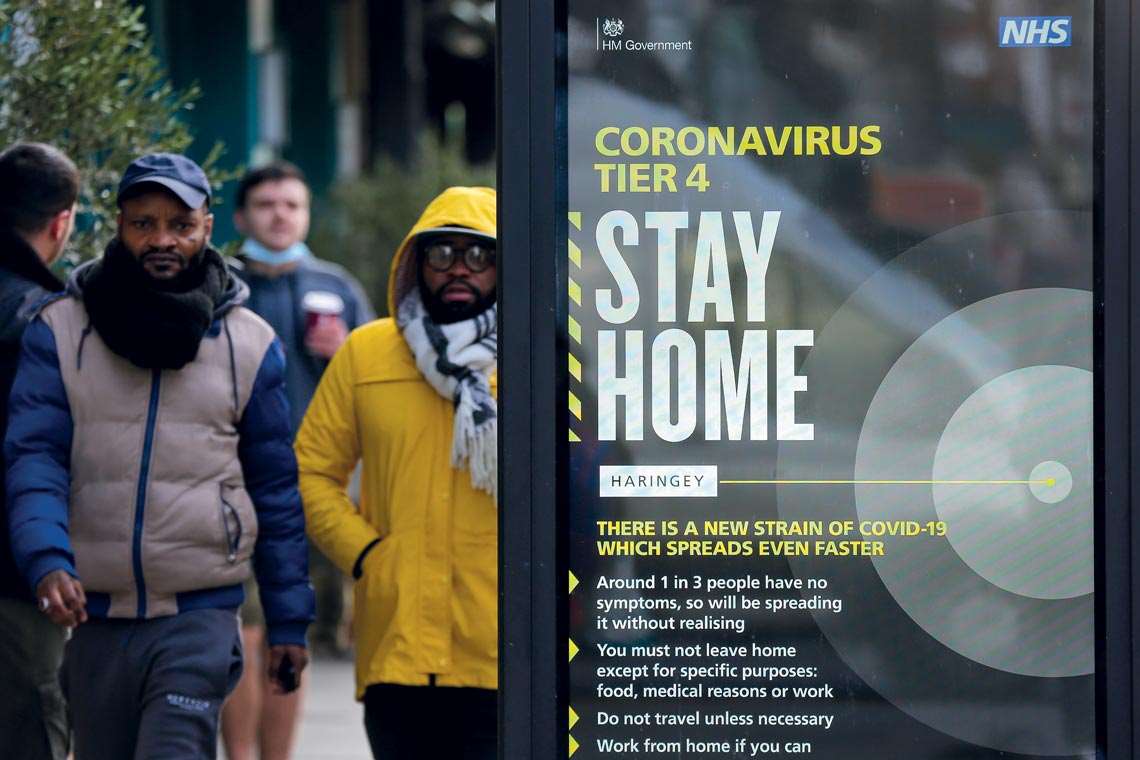 On January 19, statistics from the São Paulo State Health Department indicated that the number of children under 18 years of age treated for COVID-19 in intensive care units (ICUs) increased by 61% in the previous two months. On November 15, 2021, there were 106 patients hospitalized in critical condition. On January 17, there were 171. “This is a phenomenon known as an epidemiological shift,” physician Dimas Covas, president of the Butantan Institute, which manufactures the CoronaVac vaccine, said at a press conference. He noted that with the older population vaccinated, the pandemic is now having a greater impact on unvaccinated groups, such as children. On January 20, ANVISA authorized the use of CoronaVac in non-immunosuppressed individuals aged between 6 and 17.

In countries where Omicron is present, the demand for COVID-19 tests and the number of people off work has soared, while national health systems once again feel the pressure. The situation is not as hopeless as it has seemed at other critical moments of the pandemic, because the number of deaths has not followed the same growth rate as infections. Preliminary studies suggest that despite its high transmissibility, Omicron tends to cause less severe cases and fewer deaths than the variants that preceded it, since it seems to be less able to infect the lungs, which is often the cause of severe cases and deaths.

According to the WHO, the official global total of weekly deaths caused by COVID-19 remained stable (between 45,000 and 50,000) or even dropped slightly in December and the first half of January. During the pandemic’s worst periods in January and April 2021, around 100,000 people died of the disease every week. In South Africa, Omicron infections and deaths peaked quickly, within roughly a month, and are now on a downward trend. The same thing appears to be happening in the UK, which is seeing a drop in confirmed cases after a relatively fast peak. In the USA, where there is a strong antivaccine movement and vaccination coverage is lower than in Brazil, deaths from COVID-19 have risen significantly once again. In January this year, they reached 2,000 daily deaths. However, in some major cities, such as New York and Seattle, the number of cases is already starting to fall. The USA and Brazil are the two countries with the most deaths officially attributed to the pandemic, at 860,000 and 620,000 respectively.

Edison Durigon, a virologist from USP’s Institute of Biomedical Sciences whose team was the first to isolate Omicron in Brazil in December 2021, believes it is impossible to be sure that cases of COVID-19 caused by Omicron are milder than those caused by other SARS-CoV-2 variants. It could be that high immunization rates in Brazil at the end of 2021 helped to minimize the clinical impact of the rising number of infections (almost 70% of Brazilians have now had two doses and 15% have had a third booster dose). “No currently available COVID-19 vaccine can stop infection by SARS-CoV-2,” says Durigon. “But the immune system of vaccinated people responds more quickly to the infection and prevents the virus from spreading beyond the upper respiratory tract. If it doesn’t infect the lungs, the virus doesn’t enter the bloodstream. And if it doesn’t enter the bloodstream, it can’t spread through the body and cause systemic COVID-19 in other organs.” To what extent the Omicron variant’s apparent mildness is a characteristic of the variant itself, a result of the global immunization rates, or a combination of the two factors, remains an unanswered question. 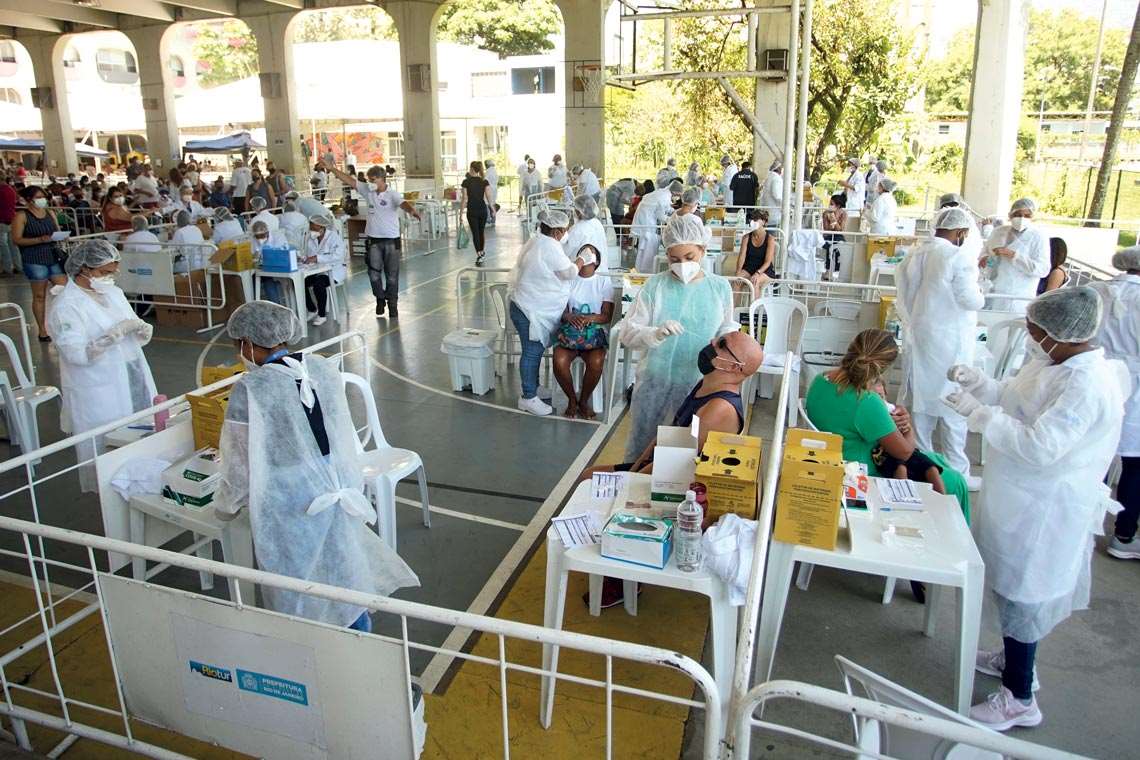 Omicron’s arrival, with its high transmissibility but apparently lower capacity to cause serious disease, has been used as a pretext by some antivaccine groups to defend an absurd idea: intentionally getting infected in the hope of achieving natural immunity against COVID-19. This strategy is objectionable and ineffective. It is like playing Russian roulette with the virus that has caused the biggest human pandemic of the last century. Tragic stories involving people who have tried to downplay the seriousness of the disease continue to emerge. Czech singer Hana Horka, 57, a well-known antivaccine activist in her country, died of COVID-19 on January 16 after deliberately contracting SARS-CoV-2.

“The pandemic is nowhere near over. With the incredible growth of Omicron globally, new variants are likely to emerge, which is why tracking and assessment remain critical,” said Tedros Ghebreyesus, director-general of the WHO. “The number of deaths remains stable, but we are concerned about the impact the variant is having on already exhausted health workers and overburdened health systems.”

To date, 5.5 million people have died from COVID-19. This is the official number of deaths attributed to the pandemic over the last two years. Some statistical models that use machine-learning algorithms to analyze all deaths (attributed to any cause) that occurred in 2020 and 2021, however, suggest that the number of deaths resulting from COVID-19 may be double or even four times higher than officially recorded. The Institute for Health Metrics and Evaluation, based in Seattle, and the British magazine The Economist recently shared statistical models indicating this greater impact.

The high transmissibility of Omicron even increases the challenges associated with unrelated tragedies, such as natural disasters. Authorities in Tonga—a country composed of 170 islands in the South Pacific that was devastated by a volcanic eruption and a major tsunami on January 15—were cautious about offers of international aid, wanting to minimize the damage caused by the catastrophe. Tonga, which has recorded just one case of COVID-19, expressed its desire to maintain its 21-day quarantine for foreigners entering the archipelago and, if possible, avoid any direct contact with outsiders arriving to help them.

Having vaccinated about 60% of its 100,000 inhabitants, the country recorded its only case of the disease last October and has had no deaths. The island nation wants to avoid repeating history, when the arrival of Europeans and other peoples brought diseases such as measles and influenza to the archipelago. Like the young Xavante boy Davi Seremramiwe, the first Brazilian child under 11 to be vaccinated, children and indigenous people all over the world now form one of the contingents most vulnerable to the novel coronavirus.