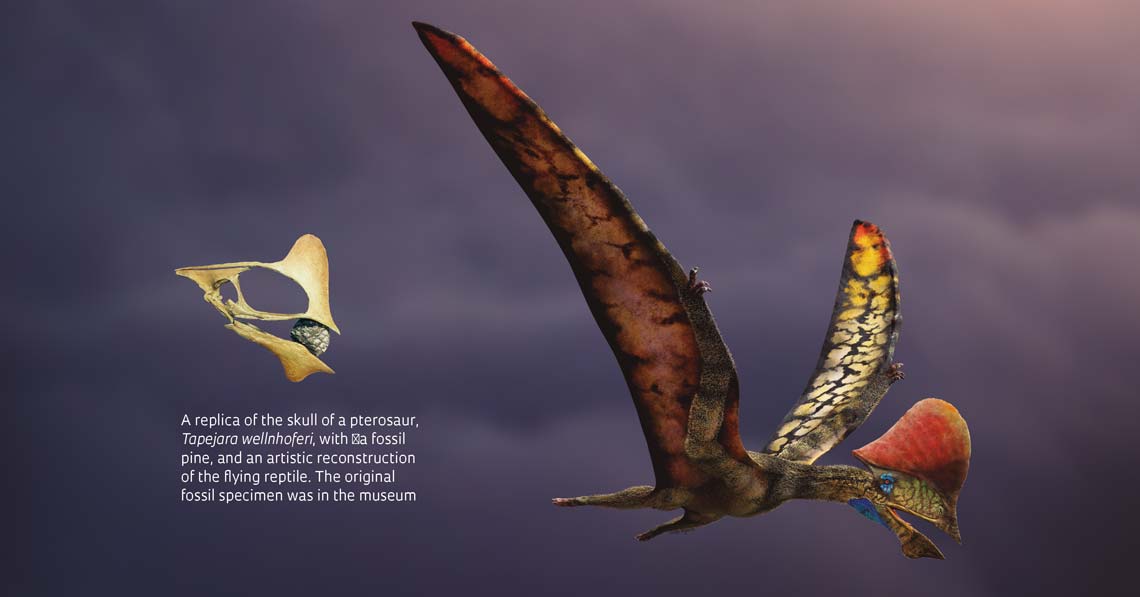 On the morning of September 3, the day after the fire at the National Museum, a single image that expressed both desolation and hope was all over the media. The Bendegó meteorite, which had been on display just inside the museum’s main entrance on the first floor and was the largest ever recovered in Brazil, stood out amidst the rubble. It was dusty, but in generally good condition, as one might have hoped for a 5.3-ton rock composed primarily of iron and nickel. Originally discovered in the backlands of Bahia at the end of the eighteenth century, in the fire’s aftermath the resilient Bendegó was found still occupying its place on its light grey marble support, which displays basic information about the meteorite for visitors. “Even the marble engravings regarding its history have been preserved,” comments astronomer Maria Elizabeth Zucolotto, the museum’s meteorite curator.

The collection of approximately 400 pieces of celestial objects that fell to Earth formed one of ten collections housed within the Department of Geology and Paleontology (DGP) of the National Museum, which employs 13 professors. Counting all the material from these ten collections, which included rocks, minerals, sediments, and animal and plant fossils, the DGP had a total of about 70,000 specimens in its care. “The entire collection was in the building that caught fire,” says paleontologist Sandro Scheffler, the department’s chief administrator. “Most of the pieces were stored, with only a small part on exhibit in the museum.” Still, on the Monday morning after the fire, before access to the unsound building had been totally banned, Zucolotto was able to enter a room not too far from the main lobby where the Bendegó still sits. There she recovered more than 30 small meteorites that had been on display, as well as two that each weigh over 100 kilos. “Some have broken up and are somewhat deteriorated, but I was able to save practically everything,” the astronomer adds.

The Bendegó meteorite, still sitting on the marble stand that supported it, was found in the rubbleTomaz Silva/Agência Brasil

However, she could not access her own workroom at the bottom of the first floor of the museum where the bulk of the collection was stored. The most valuable piece is a rare 70-gram fragment of a meteorite called Angra dos Reis, named after a beach of the same name in the state of Rio de Janeiro, where the meteor’s fall to Earth was observed in 1869. Angra dos Reis is the first specimen found on Earth that comes from a group of meteorites created about 4.5 billion years ago when the solar system was formed. For that reason the group received the name angritos. Only 28 meteorites of this class are officially recognized around the world.

When the recovery excavations in the burned-out museum begin it may be possible to know how the story ends for this ancient piece of the universe. Zucolotto believes it’s likely that the Angra dos Reis endured the fire’s heat and the burning floors collapsing onto her workroom, where it was secured in a closet. But time is working against its recovery. Due to its rocky appearance, it could be mistaken for other debris and get lost forever amidst the stones in the building’s rubble. At this point, most of the museum’s geological and paleontological collection is believed to be either lost or severely damaged. But the researchers are not totally pessimistic. About a third of the Werner collection of rare mineral samples, which were brought to Brazil when the Portuguese royal family fled Portugal in 1808, was recovered from the museum’s rubble. Approximately 60 pieces from the Werner grouping, the first to become part of the National Museum collection, had been on display in the São Cristóvão Palace. “In areas where the fire didn’t burn and there was only the collapsing walls, we’ll recover something, but I don’t know how much,” says paleontologist Alexander Kellner, the museum’s current director. “That’s the most optimistic scenario.”

150 holotypes
Walking through the burned-out building shortly after the disaster, Kellner saw (but couldn’t recover) pieces of fossils, including pterosaurs. These winged reptiles, which are the principal focus of his research, were the first vertebrates to fly. They were contemporaries of the dinosaurs, living between 230 million and 66 million years ago. In natural history museums, dinosaur fossils and reconstructions are often the items most sought after by visitors. In the São Cristóvão Palace, replicas and fossil remains of these unique pterosaurs of the Cretaceous period (between 145 and 66 million years ago), found in the Araripe basin in northeastern Brazil, vied for space with the dinosaurs. Some had striking head-crests, such as the small Tapejara wellnhoferi, which weighed two kilos and was most likely frugivorous, and the enormous Anhanguera blittersdorffi, whose wingspan reached six meters. The latter had a double crest on the top and underside of the head, with sharp teeth that must have made it a terrible predator in its day.

Both species of pterosaurs and the dinosaur Maxakalisaurus topai, a herbivore that lived 80 million years ago in what is now known as the Minas Gerais Triangle, are part of about 150 holotypes or type species of ancient vertebrates that were deposited in the National Museum’s collection. This material represents the first description in the scientific literature of certain kinds of animals and presents the basic taxonomic information that characterizes them. When a paleontologist discovers, for example, what may be an unknown species, it must be compared with the information provided by the holotypes of other evolutionarily close species. Thus, it is possible to establish similarities and differences between both specimens. “It is always possible to replace the original holotype with another specimen of the same species and create a neotype [which becomes the new reference material for that life form],” says paleontologist Sérgio Alex Azevedo, coordinator of the Digital Image Processing Lab (LAPID) at the National Museum. “But doing this for hundreds of species is much more difficult.” In some cases where there is only one known specimen from a particular species, it’s not possible to cover the taxonomic gap with a neotype.

Mineral specimen from the Werner collection, brought to Brazil by the fugitive Portuguese royal family in the early nineteenth centuryFernando Frazão/Agência Brasil

Repatriated fossils
Like Argentina, Brazil has some of the oldest dinosaur fossils in the world, between 230 and 220 million years old. None of the holotypes of these primordial species were part of the collection in the São Cristóvão Palace. In Brazil, rocks from the Triassic, the geological period in which the first dinosaurs appeared, are found only in the state of Rio Grande do Sul. Thus, fossils from the earliest dinosaurs, such as Saturnalia tupiniquim, Unaysaurus tolentinoi, and Guaibasaurus candelariensis, tend to be deposited in museums and paleontological collections at institutions in southern Brazil, such as the federal universities of Rio Grande do Sul (UFRGS) and Santa Maria (UFSM), the Pontifical Catholic University (PUC-RS), and the Zoological and Botanical Foundation of Rio Grande do Sul. “The National Museum is rich in ancient vertebrate material from the Cretaceous period,” explains paleontologist Max Langer of the University of São Paulo (USP), at the Ribeirão Preto campus. “But Brazilian fossil material as a whole is now scattered among various institutions around the country.”

Some original and important fossils, especially those found decades ago by foreign researchers or those linked to universities from outside the country, are enriching the collections of museums abroad. A classic case is the type-species of Staurikosaurus pricei, the first dinosaur discovered in Brazil, more precisely in Santa Maria, Rio Grande do Sul. Found in the 1930s and described in 1970, the fossil traces of S. pricei, which lived about 225 million years ago, are stored in a museum at Harvard University in the United States.

Replica of the Maxakalisaurus topai dinosaur on display. The animal’s original fossil was also kept in the museumRomulo Fialdini/Tempo Composto

One important set that may have been lost in the fire is known as the Caster collection, a group of Devonian fossils (from between 416 million and 359 million years ago). These include marine invertebrates such as snails, starfish, mollusks, and corals that were collected by the American paleontologist Kenneth Edward Caster in Brazilian sedimentary basins in the 1940s. During this geological period almost half of what is now the Brazilian territory was under water. The collection, which weighed about one ton, had been stored at the University of Cincinnati in the United States but was shipped back to Brazil in 2016. “This was the largest repatriation of fossil material to Brazil yet,” says Sandro Scheffler.

Also uncertain is the fate of the first paleontological remnants of a plant species described in Brazil. It is a cross-section of a tree fern trunk of the species Psaronius brasiliensis, which grew in what is now Brazilian soil about 270 million years ago. The specimen was studied in France in the nineteenth century and was one of the attractions in the 160-piece paleobotany exhibition that was on display for five years at the National Museum, and which was dismantled only one week before the fire. “As we had just dismantled the exhibition, the fossils were stored in steel cabinets,” says Luciana Witovisk, curator of the paleobotany department, which houses about 5,000 specimens of fossilized plants. “The heat must have affected the fossils, but we’re hoping the cabinets might have reduced the damage.”