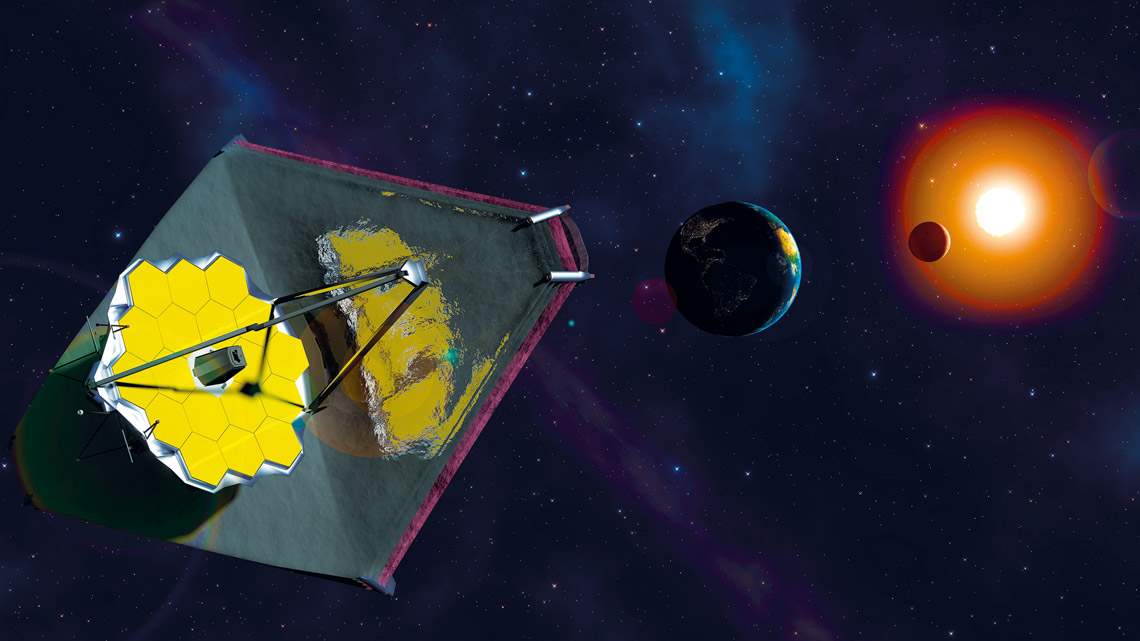 An artistic rendition of the James Webb Space Telescope, orbiting the sun at a distance of 1.5 million kilometers from Earth

In the week of Christmas, an Ariane 5 rocket is set to launch from the Kourou spaceport in French Guiana, carrying the largest, most expensive and most powerful instrument ever deployed to explore our Universe: the James Webb Space Telescope (JWST), widely regarded as the successor of the Hubble Space Telescope (see comparison chart). The observatory will orbit the Sun as if it were a planet of our solar system, at a distance of 1.5 million kilometers from Earth. The telescope has an estimated useful life of 10 years, and was developed at a cost to launch of US$10 billion, three times more than the initial cost of the Hubble telescope, with the budget nearly fully funded by NASA.

Webb’s mission will be to observe the primordial and distant Universe—the first stars, galaxies, black holes, and planet systems formed immediately after the Big Bang, the initial explosion believed to have created the Cosmos about 13.7 billion years ago. Barring any last-minute snags, on December 22 the James Webb will leave behind its troubled past on Earth and begin its cosmic mission in support of science. Its 30 years of development have been punctuated by design and instrumentation changes, a (rejected) House proposal to cancel the program, and budget and schedule overruns. The launch has been rescheduled at least on two occasions in the last decade, and postponed another three times this year.

Primarily funded by NASA, with a small contribution from its counterparts in Europe (ESA) and Canada (CSA), the initial concept for the James Webb was developed in 1989, a year before Hubble was launched. In 1996 it was initially called the Next Generation Space Telescope (NGST), and assigned a budget of US$500 million. In 2002 the telescope was renamed in honor of James E. Webb, NASA’s second administrator, who oversaw the Apollo program and the landing of the first humans on the Moon. Recently, a group of astronomers challenged the choice of name due to James Webb’s alleged involvement in persecuting gay and lesbian people during his career in government in the 1950s and 1960s. NASA, however, has dismissed these criticisms and decided to keep the current name.

The telescope has been stationed at the Kourou spaceport, around 240 km away from the border with Brazil, since mid-October, suggesting it is highly likely to be finally launched as scheduled. “We’ve checked everything over and I can report James Webb is in perfect condition,” NASA instrument systems engineer Begoña Vila told BBC in November. Unlike Hubble, which essentially captures observations in the visible light and ultraviolet wavelengths, Webb is designed to operate at infrared frequencies that are invisible to the human eye.

The type of radiation it will capture has to do with its observation targets—the James Webb has a primary mirror diameter of 6.5 meters, nearly three times the size of the Hubble’s, and captures six times as much light. “Very primitive and distant targets, formed a few hundred million years after the Big Bang, can only be observed in the infrared range, not in the visible light spectrum,” explains Roderik Overzier, a Dutch astrophysicist at the Brazilian National Observatory (ON) in Rio de Janeiro, who is leading one of the 300 projects that will use data from the James Webb. Overzier’s group will study the evolution of the oldest known radio galaxy, TGSS J1530+10491, formed about 2.5 billion years ago, and a younger galaxy about 10 billion years old.

“These galaxies are active and have a black hole at their center,” says astrophysicist Catarina Aydar, a doctoral student at the Institute of Astronomy, Geophysics, and Atmospheric Sciences at the University of São Paulo (IAG-USP) and a member of Overzier’s research group. Webb will allow scientists to observe objects between 10 and 100 times fainter (to an Earth-based observer) than those captured by Hubble. At its full resolution, it can capture a sharp image of a celestial body the size of a soccer ball at a distance of 550 kilometers.

Webb has been designed to see objects formed between 100 and 200 million years after the Big Bang, a phase of cosmic history beyond the reach of current observational instruments. “To me, the James Webb can be better described as the successor to the Spitzer telescope, not Hubble,” says Rogemar Riffel, an astrophysicist at the Federal University of Santa Maria (UFSM), in Rio Grande do Sul, who is leading a project that will use data from NASA’s new telescope to observe molecular hydrogen (H2) winds around black holes in relatively close galaxies. NASA’s Spitzer Space Telescope, which operated between 2003 and 2020, also made observations in the infrared wavelength, but was about a thousand times less powerful than the James Webb.

The new infrared telescope has a number of unique features, starting with its size—22 meters (m) long by 12 m wide, about the size of a tennis court (Hubble is roughly the size of a bus). Never has anything this large been launched into space. Fully deployed, the observatory would not be able to fit into any available satellite rocket. So its components will be folded in, allowing the telescope to be accommodated in the Ariane 5’s payload fairing. After launch, the core parts of the telescope—the sunshield (its largest component), the antenna, and the main mirror—will be unfolded and latched together in an automated, origami-like process.

The telescope’s main mirror comprises 18 smaller, hexagonal segments made of beryllium, a lightweight material. Aboard the Ariane 5, it will be folded in three sections which will then be fitted together to form the main mirror: a larger central column holding 12 segments, and two wings with three segments each. “There are 344 single-point-of-failure items on average in the telescope; 80% of those are associated with the deployment,” Mike Menzel, NASA’s lead mission systems engineer, said in a press conference in November. If any of these items malfunction and the problem cannot be solved, the mission could be compromised.

Within a month after its launch, the James Webb will be fully deployed, cooled by its sunshield and cooling systems (the telescope instruments operate at very low temperatures, between -266 and -223 degrees Celsius), and placed in orbit around the Sun. Over the next five months, its components will be checked and calibrated. The telescope has four observation instruments equipped with cameras, spectrographs, and coronagraphs, which operate at different wavelengths, primarily in the infrared range. The cameras generate images of objects, while the spectrographs capture light and break it down into different colors (frequencies), a process that allows researchers to analyze the chemical composition of the target celestial body. Starlight-blocking coronagraphs can see objects that would otherwise be obfuscated by the glow of nearby stars, such as exoplanets in orbit around their suns.

The James Webb is expected to begin its first cycle of scientific observations approximately six months after launch, in the second half of 2022. This phase will last for one year, capturing approximately 6,000 hours of observations. As is customary for large internationally developed telescopes, around 80% of the observation time has been set aside for groups of astronomers from around the world that have submitted proposals. The remainder is reserved for projects developed by the telescope’s managers and designers. Around 1,200 proposals have been submitted by groups from 44 countries for the first observation cycle, of which 286 have been selected. Two of the selected programs are led by astronomers at Brazilian institutions: Roderik Overzier at ON, and Rogemar Riffel at UFSM. Another nine programs outside Brazil have at least one participating Brazilian-based researcher. Overzier himself is a member of three of these foreign-led initiatives, and Riffel is participating in a fourth.

Isabel Aleman, an astrophysicist at the Federal University of Itajubá (UNIFEI), in Minas Gerais, is collaborating on two international programs that have been awarded observation time. “Both programs will study planetary nebulae: clouds of materials that are ejected by old, low-mass stars—approximately one to eight solar masses—when they die,” says Aleman. Astrophysicist Marília Gabriela Cardoso, a doctoral student at IAG-USP, is a member of a research team that will observe M dwarfs—stars that have less than half of the Sun’s mass—in globular clusters.

Another three ON postdoctoral fellows are collaborating on two additional international programs. Ana Carolina de Souza Feliciano is a member of a team studying the composition of so-called trans-Neptunian objects—icy celestial bodies located beyond Neptune. Paola Dimauro and Yolanda Teja are collaborating with a group that will observe a possible lone star about 13 billion years old. Judging by the number and diversity of selected proposals, the James Webb will be high in demand if the mission is successful.