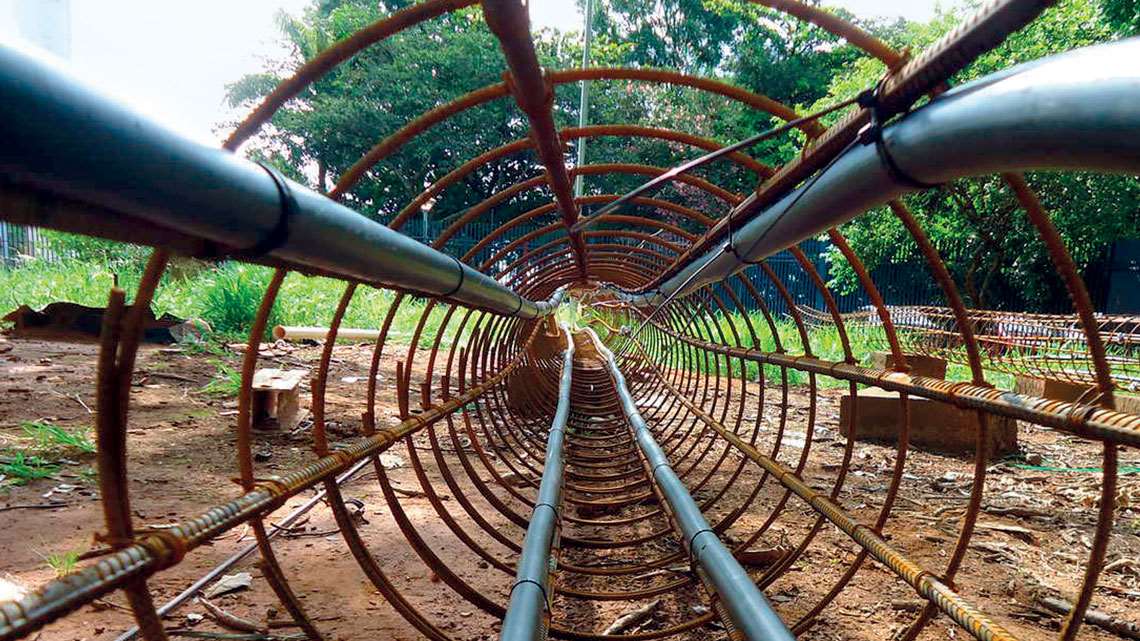 Using thermal energy from the subsoil to power air conditioning systems could significantly reduce expenses in commercial buildings, apartments, and homes. Surface geothermal air conditioning is widely used in countries with temperate climates, mainly in Europe, the USA, Japan, and Canada, and will soon be tested in Brazil for the first time. The experiments will be conducted at the CICS Living Lab, a test building being built on the Cidade Universitária campus in western São Paulo by the Center for Innovation in Sustainable Construction (CICS) at the Polytechnic School of the University of São Paulo (POLI-USP).

“In Brazil, air conditioning accounts for an average of between 40% and 50% of the energy costs of a commercial building and around 20% to 25% of homes per year. Geothermal sources can reduce energy consumption, leading to financial savings and reducing the environmental impact,” says Alberto Hernandez Neto, a mechanical engineer from the Department of Mechanical Engineering at Poli-USP.

A 2018 study by the Energy Research Company, which provides services to the Brazilian Mining and Energy Ministry (MME), revealed that residential electricity consumption for air conditioners alone was 18.7 terawatt-hours (TWh) in 2017. This is equivalent to all the solar energy generated in the country in the year, and could reach 48.5 TWh by 2035 according to the study.

The geothermal heating, ventilation, and air conditioning (HVAC) system to be tested at the CICS Living Lab will use thermal exchange foundations, in which a fluid, such as water, circulates through tubes installed inside the building’s foundation piles, exchanging heat between the internal environment and the ground outside. “The system functions based on the difference in temperature between the two parts,” explains Cristina de Hollanda Cavalcanti Tsuha, a civil engineer from the Geotechnics Department of USP’s São Carlos School of Engineering (EESC) and head of a project evaluating the technology in the state of São Paulo. Her research has received funding from FAPESP.

In São Paulo, summer temperatures commonly exceed 30 degrees Celsius (ºC). But a few meters below the ground, the subsoil maintains a constant temperature all year round that is close to the average annual air temperature. In the region surrounding USP, for example, the subsoil temperature is around 23 ºC.

Thermal energy is transported by a geothermal heat pump that exchanges heat between the subsoil and the building’s internal environments (see infographic). The equipment efficiently cools or heats the interior of the building. “It works like a domestic refrigerator,” explains Hernandez Neto. “The difference is that geothermal heat pumps are reversible—they can cool or heat inside environments.” According to the engineer, a heat pump consumes 40% less energy than conventional air conditioning, on average.

In countries with temperate climates, the system’s dual function (heating and cooling) allows it to be used both in summer and in winter, using underground heat to warm up buildings by balancing the temperature of the subsoil around the foundations.

In countries with tropical climates where space heating in the winter is uncommon, such as Brazil, the long-term impact on underground temperatures of using a geothermal system solely to remove heat from buildings is still unknown. Continuously increasing the temperature of the subsoil could reduce the efficiency of geothermal HVAC systems over time, according to Tsuha.

The researchers plan to use the CICS Living Lab as a means of assessing this underground impact and research ways to prevent it. One approach would be to install the system on all of a building’s foundation piles, but alternate where heat is exchanged—using the piles on one side of the building one year, and the piles on the other side the next. Another would be to extract the excess heat from the subsoil and use it to provide a hot water supply.

The CICS Living Lab will also help scientists determine whether heating and cooling cycles can affect the behavior of building foundations over time. A first study of this issue was the subject of a doctoral thesis written by civil engineer Thaise da Silva Oliveira Morais, supervised by Tsuha at EESC, USP. The thesis won the 2018–2019 Costa Nunes Award from the Brazilian Association of Soil Mechanics and Geothermal Engineering.

“The imposition of thermal cycles [absorbing and dispersing thermal energy] causes the piles to expand and contract. In the tests carried out for the thesis, which used a tropical soil profile for the city of São Carlos and only dispersed heat into the subsoil [to cool the internal environment], we didn’t observe any significant impact on the mechanical response of the structures,” explains Morais. “But we need to study how the foundations respond after more heating and cooling cycles, as well as also considering different thermal demands.”

Geothermal HVAC systems can also be retrofitted when renovating old buildings. In these cases, the pipes needed for the thermal exchange process can be installed in holes drilled into the ground around the property. According to Hernandez Neto, retrofitting a 20-story building with central air conditioning costs an estimated R$2–2.5 million. Installing a heat pump system and external piping in holes up to 100 m deep, meanwhile, would cost around R$2 million. The advantage comes from the electricity savings made over time.

The CICS Living Lab is scheduled to open in 2023. It will also be used to study innovative technologies at different stages of the construction process, such as rebar made of new steel alloys and high-performance concrete production processes designed to mitigate carbon dioxide emissions.

The use of underground thermal energy is not a new approach. The first geothermal power station was built in Italy in 1904. This type of plant uses hot water or steam from the magma inside the Earth to drive turbines that power generators and produce electricity. Only regions with volcanoes or geysers can harness this energy. Some 25 countries currently produce electricity at geothermal plants, including Iceland, the USA, Japan, and New Zealand.

Surface geothermal energy, however, can be used anywhere for heating or cooling indoor environments, and has been the subject of research since the 1950s. Geothermal temperature control using foundation piles emerged in Austria in the 1980s. It is now used in thousands of buildings worldwide, including homes and commercial buildings.

One of the most iconic is the Google headquarters in Mountain View, California, a 75,000-square-meter (m2) campus with three buildings. The foundations contain 4,000 24-meter-deep piles, 2,500 of which are used in the geothermal HVAC system. In Brazil, Tsuha and Hernandez Neto expect homes, hotels, hospitals, and commercial buildings to be the primary users of the system.