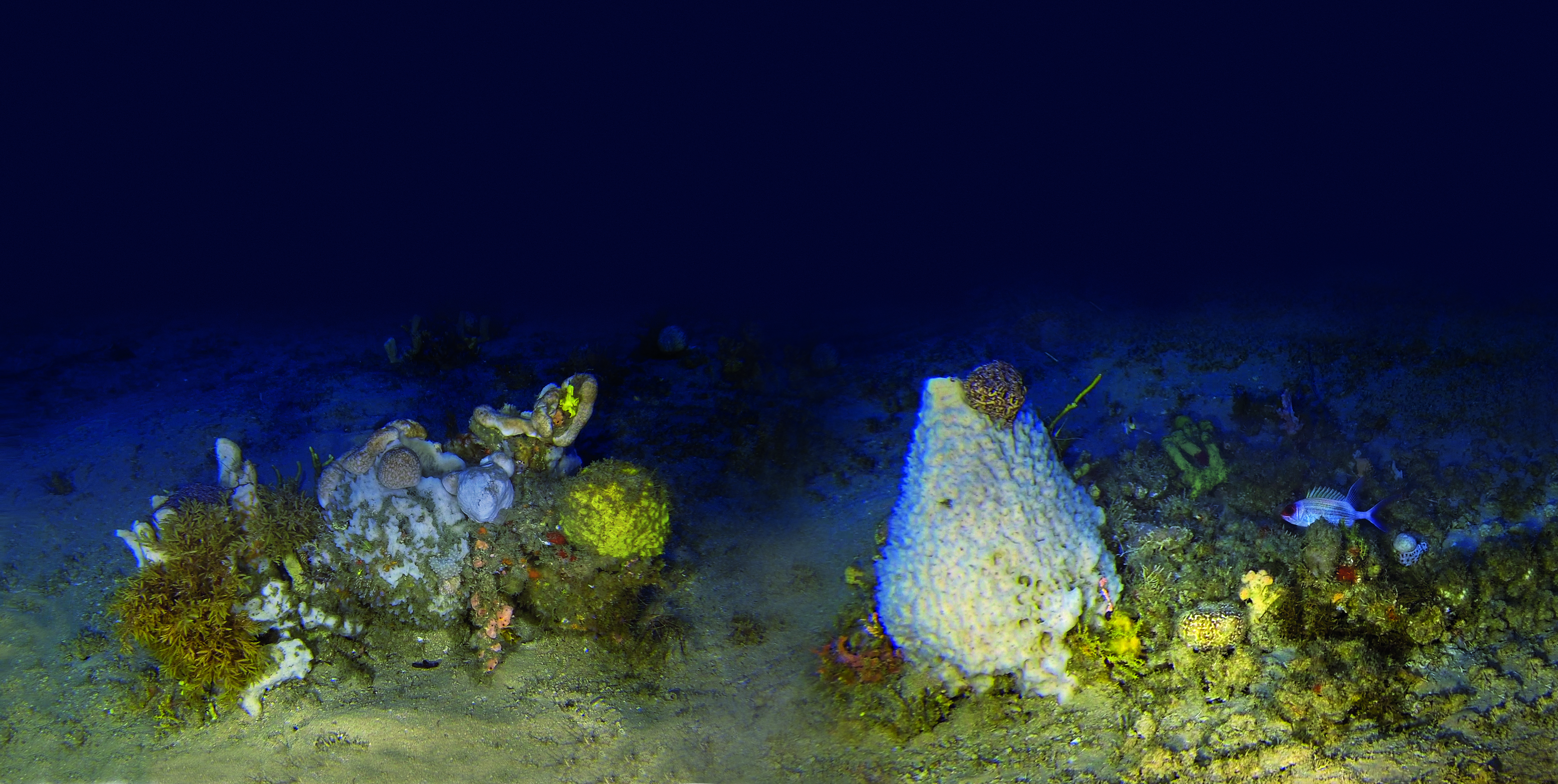 Underwater surveys indicate that reefs on the continental shelf in front of the mouth of the Amazon River may be much larger, deeper, and richer in species of aquatic organisms than indicated by initial measurements which were carried out in 2012 and 2014 using sonar and dredges that sweep the bottom of the seabed. The reefs are 110 kilometers (km) from the coast and extend from Amapá to Maranhão. There the muddy waters of the Amazon meet the Atlantic Ocean and the tide rises from 6 to 8 meters (m) per day. Like the Amazon itself, the world’s largest river spanning 50 km wide in some places and spilling around 200 tons of water and 14 tons of sediment per second into the sea, the reefs are proving to be monumental.

The reef area may be six times greater than the initially estimated 9,500 square kilometers (km2) and could reach 56,000 km2, according to expeditions conducted in January and February 2017 and April and May 2018 aboard the Esperanza, a ship belonging to the nongovernmental organization Greenpeace, by researchers from universities in Paraíba, Pará, Rio de Janeiro, and São Paulo. If confirmed, the area may be larger than the state of Espírito Santo (46,000 km2).

In September 2017, a group of researchers from the Abrolhos Network aboard the Alucia of the Woods Hole Oceanographic Institute in the United States toured the region and found that the reefs can extend 350 m in depth, almost three times more than originally estimated. “We confirmed that the landscape is very fragmented and discontinuous, like other reefs on the edges of the continental shelf,” says biologist Rodrigo Moura, a professor at the Federal University of Rio de Janeiro (UFRJ) and coordinator of the trip with the Alucia and Abrolhos Network.

The two teams recognize that this is a rich and complex area. “The diversity of environments is equivalent to forests, with a large number of species in a wide area,” noted biologist Ronaldo Francini Filho, a professor at the Federal University of Paraíba and lead author of the article published in April 2018 in the scientific journal Frontiers in Marine Science presenting the results from the Esperanza trips. He added, “Each area is at different stages of development,” some younger and some more mature, forming or occupying clearings.

The formations differ in a north-south direction. According to Moura, the reefs on the coastline of Amapá are older (around 14,000 years), have stopped growing, and are composed mainly of mollusks and other aquatic invertebrates but not corals. The ones in Maranhão are younger, are still growing, and are made up of corals and calcareous algae. The biologist Gilberto Amado, a researcher at the Jardim Botânico Research Institute in Rio de Janeiro participated in the Alucia voyage with other specialists from the Abrolhos Network and verified that the structure and composition of the banks of calcareous algae called rhodoliths become more complex moving from north to south, as described in a July 2018 article in the Journal of South American Earth Sciences.

“Most coral reefs are in warm waters, shallow and clean, with lots of light and few nutrients,” says oceanographer Nils Asp, a professor at the Federal University of Pará who participated in one of the trips on the Esperanza. “There at the mouth of the Amazon, it’s the opposite. The sediment carried by the river makes the water cloudy but brings along many nutrients, making up for the lack of light.” Another peculiarity is the variation in acidity, salinity, and turbidity in the water that results when the river meets the ocean.

At the bottom of the continental shelf in front of the mouth of the longest river in the world, reefs and rhodoliths extend for hundreds of kilometers. On this surface, large yellow, red, black, and white sponges dominate the landscape. “Because of the volume of nutrients, it’s an ideal environment for sponges, which are filtering organisms,” says Moura. Meanwhile, the researchers identified approximately 70 species of fish, including some which are rare on the Brazilian coast, like the Northern red snapper, which reaches up to 1 m in length, and the Atlantic goliath grouper, which can reach 3 m. So far the expeditions have also recorded about 80 species of sponges and 40 corals, many of which are similar to those found in the reefs of the Fernando de Noronha and Abrolhos Archipelagos.

A team from the Federal University of Pernambuco (UFPE), led by fisheries engineer Sigrid Neumann Leitão, identified complex communities of organisms that float in the water called zooplankton. The researchers counted 197 species of zooplankton, predominantly millimeter-long crustaceans similar to insects known as copepods, with 92 species. As detailed in a March 2018 article in Frontiers in Microbiology by the Pernambuco group, the density ranged from 2.6 million individuals per cubic meter (m3) in the areas closest to the mouth of the river to 107 individuals per m3 in more distant regions, because of the volume of sediments.

On the reefs live two species of bluish fish known as damselfish (Chromis spp.), which are common in the Caribbean Sea approximately 2,000 miles away. This and other indications reinforce the hypothesis that the reefs could act as a corridor (and not as a barrier, which has also been considered) between the sea in northern South America and the coast to the south of Maranhão. “Since the 1970s it was thought that fish and other organisms could pass little by little along the bottom of the river mouth and that there could be genetic mixing between organisms from the Caribbean and from the coast to the south of the Amazon mouth,” says biologist Sergio Floeter, professor at the Federal University of Santa Catarina (UFSC) and coordinator of the National Research Network for Marine Biodiversity (SISBIOTA-MAR). “Now we have more evidence of this connection.”

Steep slopes at the bottom of the river mouth
On the sea floor, there are cliff-like escarpments that extend for kilometers and up to 70 m in height. “It is believed that in this part of the continental shelf, the sand and mud accumulated over 10 million years had already covered the entire ocean floor,” says Asp. According to him, these step-like levels could be a consequence of the erosion caused by the seawater 18,000 years ago, when the sea level was about 120 m lower than it is today. The escarpments consequently mark the level of the Atlantic Ocean during the last ice age, when large areas of the planet were covered by ice, or show changes in the course of the Amazon River, which could have excavated the rocks with its waters. There is even a third hypothesis which suggests they resulted from the weight of the sediment. In this case, there would have been a seesaw effect: some stretches of the river mouth would have gone down, raising other areas up, such as the eastern part of the island of Marajó.

“The reefs of the Amazon River are a unique environment which is still being discovered. Nobody imagined it could be so large,” says biologist Helena Spiritus of Greenpeace. This huge, rich area is only being studied now because up until the mid-1970s, scientists were sure that the volumes of sand and mud the river spilled into the sea would block light from penetrating and the formation of any type of environment. The evidence has gradually worn away this theory.

There has only been scarce information on the mouth of the Amazon since the 1950s. During the 1960s, oceanographer John Milliman of Woods Hole and geologist Henyo Barreto of Petrobras identified a rocky structure rich in carbonates in the region. In 1977, two biologists from the National Museum of Natural History in the United States, Bruce Collette and Klaus Rützler, presented a list of 45 species of fish and 35 species of sponges typical of reefs, which they collected along the mouth of the river.

In July 1998, Moura, Francini, and the biologist Ivan Sazima of the University of Campinas (UNICAMP) went beyond Parcel de Manuel Luís in Maranhão, which until that point had been the northernmost coral reef in Brazil; they entered the waters further north along the Brazilian coast and found six species of corals that had not been reported in this part of the shoreline. “The fishermen said that to the north of this area there were a lot of reefs,” recalls Francini. Fishing for red snapper and lobster in the region also indicated that the bottom was solid and not only mud, but logistical and financial difficulties hindered the organization of expeditions. That is, until 2012, when a team coordinated by Moura of UFRJ traveled to the area on Woods Hole’s Atlantis.

Along with the fascination of these discoveries comes concern, since the mouth of the Amazon has been targeted for oil and natural gas exploration. In 2013 the federal government offered 125 areas in an international bidding process, 39 of which were acquired by Brazilian and multinational companies. At the end of May, after returning from the second expedition to the mouth of the Amazon, Francini sent a letter to the Brazilian Attorney General containing underwater photos of the coral reefs and calling for a halt to applications for environmental licensing from an oil company interested in exploring an area within the region.