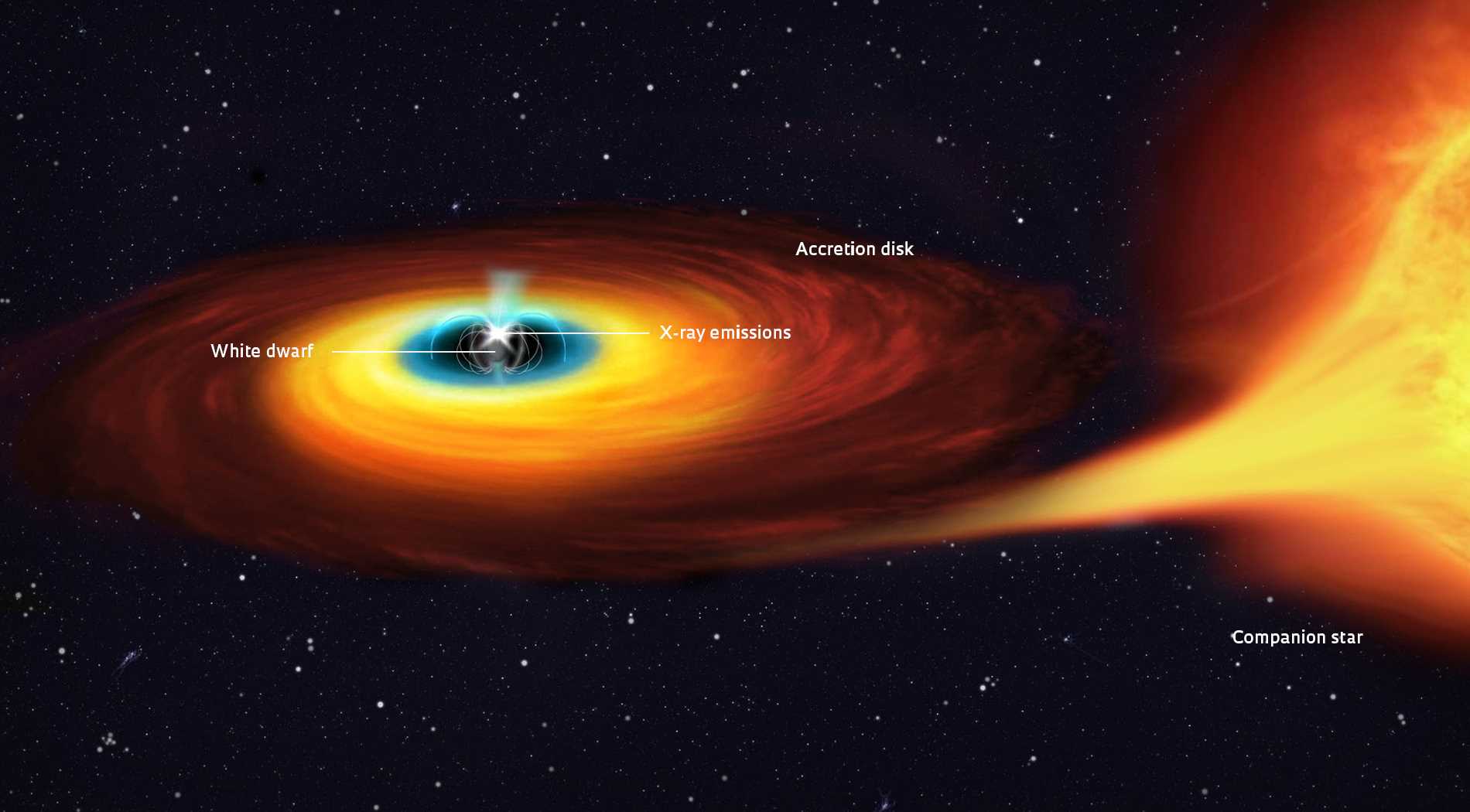 In their final evolutionary stage, more than 97% of the stars in the Milky Way, including the Sun, will transform into degenerate white dwarfs—dying, extremely dense and compact stars. A group of astrophysicists from Brazilian institutions, in collaboration with a colleague based in the United States, has found a superlative example of this type of celestial body. This white dwarf is located in a star system named CTCV J2056-3014, and spins on its own axis in just 29.6 seconds, faster than any other known white dwarf. Among white dwarfs, which can squeeze a mass similar to that of the Sun into a volume the sized of the Earth, the previous record was a star that completes its rotation in 33 seconds.

These stars don’t have nuclear fusion reactions taking place in their interiors, and thus are in the process of cooling. Most have rotation periods that range from minutes to hours if they’re in binary systems composed of two stars, to days, when they are solitary stars. White dwarfs are so dense that they can compact 25 tons of matter into a volume as small as a matchbox. The CTCV J2056-3014 system is 850 light years from Earth. (The closest star to Earth, not including the Sun, is Proxima Centauri, at 4.2 light years).

One day on Earth is approximately 24 hours long because that is the time it takes for the planet to rotate once around its axis. “In the white dwarf we studied, it is as if the ‘day’ lasted less than half a minute,” comments astrophysicist Raimundo Lopes de Oliveira, from the Federal University of Sergipe (UFS) and the National Observatory (ON), principal author of the study published July 30 in The Astrophysical Journal Letters (ApJL). “At its equator, the star rotates at approximately 1,350 kilometers per second [km/s].” For comparison, the Earth’s rotation speed at the equator is about 0.46 km/s, almost 3,000 times less. Only neutron stars, which are even more dense and compact than white dwarfs, have shorter rotation periods than the CTCV J2056-3014 system, whose speed is associated with certain peculiarities of its particular system. It is quite close to a larger, Sun-like star. Both stars orbit around a common center of gravity, forming what astronomers call a binary system. The distance between the two stars is more or less the same as the distance from the Earth to the Moon, around 380,000 kilometers, which is right next door in astronomical terms. They are so close together that the gravity of the white dwarf is able to strip away fluid matter from the outer layers of the companion star. “Where this matter falls X-rays are emitted, at a lower intensity than visible light,” comments astrophysicist Cláudia Rodrigues, from the National Institute for Space Research (INPE), a coauthor of the study. “It’s the capture of this matter that makes the white dwarf spin so quickly.” These emissions have a periodicity, which was observed, making it possible to calculate the time required for the star to spin on its axis.

The star system under study belongs to the class of binary stars called cataclysmic variables, more specifically a type known as intermediate polar systems. This designation derives from the premise that the matter that leaves the Sun-like companion star moves through an accretion disk (a diffuse circular structure) that forms around the white dwarf and follows the lines of the compact star’s magnetic field until accreting on its surface. In addition to spinning extremely fast, the white dwarf analyzed in the article has two rare physical characteristics among cataclysmic variables: its luminosity is low in X-rays, which makes it difficult to identify, and its magnetic field seems less intense than the standard for this class of stars.

Interest in studying the system formed by this white dwarf and its companion star emerged through the collaboration of national research groups that used different telescopes in distinct phases of observation. In 2012 and 2018, Rodrigues and astrophysicist Alexandre Soares de Oliveira, from Vale do Paraíba University (UNIVAP), observed around 100 systems with the potential to contain cataclysmic variables (CVs), ideally magnetic CVs. They made observations in the visible light spectrum with the Soar telescope, in Chile, and at the Pico dos Dias Observatory (OPD), in Brazópolis, Minas Gerais. They selected about 30 that seemed to be the most promising. “The stars in this type of system are so close together that we see only one speck of light, with the combined brightness of both,” explains Soares de Oliveira. “It isn’t possible to distinguish them visually.”

The best way to find cataclysmic variables is to observe them at X-ray wavelengths. Rodrigues and Soares de Oliveira sought out Raimundo Lopes de Oliveira and proposed a study of certain systems that were candidates for containing CVs. The researchers obtained observation time on the European Space Agency’s XMM-Newton satellite and identified the 29.6-second pulse, and the peculiarities in the X-ray emissions coming from the CTCV J2056-3014 system.

With this data in hand, the astrophysicists remembered that a colleague, Albert Bruch, from the National Astrophysics Laboratory (LNA), in Itajubá, Minas Gerais, had studied this system in visible light and published an article in 2018. “But I hadn’t seen the pulse, because I wasn’t looking for that type of data,” Bruch says. At the request of the other researchers, he analyzed his observation data again and identified a cyclical variation in visible light emitted from the pair of stars every 29.6 seconds, exactly the same as had been observed in the X-rays. It was more evidence that the system’s rotation period was under half a minute. Interestingly enough, Bruch’s measurements were obtained using the small, vintage Zeiss telescope at OPD, which has a 60-centimeter mirror. “This shows that modest equipment can produce good science and participate in projects involving large telescopes,” comments Bruch, co-author of the ApJL paper, which also included the participation of astrophysicist Koji Mukai, from NASA, the American space agency, and Maryland University, Baltimore County.