The results of a new academic ranking demonstrate the power of a type of world-class university that tends to be more flexible and interdisciplinary than the traditional model—which impacts their ability to innovate. Published last October, the Nature Index 2019 Young Universities named the 175 best universities in the world established less than 50 years ago, using as a parameter the number of articles published in 82 high-impact scientific journals in four fields of knowledge: physics, chemistry, life sciences, and environmental and Earth sciences.

Among the top 10, there are no institutions from the United States—a country that usually dominates rankings—but three Chinese universities, three South Korean universities, one from Singapore, one from Switzerland, one from Saudi Arabia, and one from France. Brazil is represented by two institutions: São Paulo State University (UNESP), in 60th place, and Federal University of ABC (UFABC), in 69th. “Many of these young universities pride themselves on promoting creative thinking as well as providing leadership opportunities for young researchers,” said the biologist responsible for the ranking, David Swinbanks, when announcing the results. “This attracts a diverse student population and encourages the pursuit of unconventional research.”

The predominance of Asian universities in the best positions results from the robust and constant investments that countries like China, South Korea, and Singapore have made in education, research, and development in recent decades, and also from the fact that these nations expanded their university systems in the 1970s and 1980s. Despite all being young, the best institutions are far from being homogeneous. The Chinese universities are an example of this. The University of the Chinese Academy of Sciences—which ranked first—is an institution with 45,000 students, and until 2012, was dedicated solely to research and graduate studies. It currently has around 700 undergraduate students. Based in Beijing, it was established in 1978 as a kind of amalgamation of the 114 science and engineering higher education research institutes linked to the Chinese Academy of Sciences, the main public research institution in the country.

On the other hand, the other two Chinese institutions in the top 10 are quite different, starting with their size. The Hong Kong University of Science and Technology, established during British rule, has 15,000 students (two-thirds of whom are in graduate school); the South University of Science and Technology (SUSTECH), in Shenzhen—whose curriculum is taught in English—has 5,000 students.

South Korea’s university system has also had a boost in recent decades. Today, 70% of the country’s citizens aged 25 to 34 have college degrees, compared to 2% in 1945. The South Korean universities recognized by the Nature Index follow a markedly technological model. Ranked 4th, the Advanced Institute of Science and Technology in Korea (KAIST) is a public university, with 10,000 students. It was established in 1971, in Daejeon, with resources from a United States cooperation agency and under the leadership of a team of researchers from several countries, led by engineer Frederick Terman (1900–1982), then vice president of Stanford University and one of the creators of the technology park that gave rise to Silicon Valley. The Pohang University of Science and Technology (POSTECH), which ranks 8th, is privately owned and was founded by a large steel company. Today, it boasts 5,000 students.

But most impressive of all is the National Institute of Science and Technology of Ulsan (UNIST), established 12 years ago and already ranked 10th among young universities. Located in Ulsan, the industrial capital of Korea, it is publicly owned and autonomously managed. With courses taught in English and research focused on materials and energy, its goal is to be among the top 10 in the world in 2030. For now, it is among the 300 institutions ranked by Times Higher Education and among the 400 included in the Academic Ranking of World Universities (ARWU), by the University of Shanghai.

According to Renato Pedrosa, from the Department of Science and Technology Policy at the University of Campinas (UNICAMP), young and technology-focused institutions have become increasingly competitive in rankings. “South Korean institutions have ties with businesses and are essential to foster innovation,” explains Pedrosa, who is a coordinator for the FAPESP Program for Science, Technology and Innovation Indicators in São Paulo. In the ARWU ranking, Korean institutions KAIST and POSTECH were among the top 400 in the world in the early 2000s. Today, they emerge between the 76th and 100th positions. There are other technology-focused universities at the top of the Nature Index list, such as the Swiss Federal Institute of Technology Lausanne and the King Abdullah University of Science and Technology, in Saudi Arabia.

The methodology of the Nature Index is based on scientific articles, without considering other established parameters, such as well-known research, patents, or the employability of alumni. It took into consideration articles published in journals in four areas of knowledge and the relative participation of each institution in the articles. By choosing high-impact journals in nature and life sciences, the results measure the universities’ ability to generate knowledge with applications that potentially impact the economy.

Brazil has established federal universities in recent years with the goal to increase the number of undergraduate students, while Asia has opted for institutions focused on research and innovation, claims Renato Pedrosa

“The data from the Nature Index is transparent and easy to understand,” claims pharmacologist Cleopatra Planeta, associate dean of University Outreach and Culture and current president of the Rankings Commission at UNESP. In the case of UNESP, 60% of its grade was a result of articles published in the physical sciences. Half of them ran in one journal—the Journal of High Energy Physics—and most of their authors are linked to the UNESP Institute for Theoretical Physics. It is possible to see the performance of each institution separately in each of the four areas. In physics, UNESP ranks 28th, one position behind UFABC, which ranks 27th and whose strength also lies in physics.

The two Brazilian institutions are very different from one another. UNESP has 54,600 students in 24 municipalities and began with the 1976 merger of public higher education institutes. UFABC, on the other hand, with just over 13,000 students, was established only 13 years ago and follows an innovative model: instead of departments, it is divided into three interdisciplinary centers.

Chemist Dalmo Mandeli, international relations advisor at UFABC, attributes the success of the university to its interdisciplinary model and to the fact that it was created exclusively with PhD-level professors. “Many of our professors were trained at large universities, such as University of São Paulo (USP) and UNICAMP and were already part of international research groups before coming to UFABC,” he explains. However, Mandeli believes that increasing the competitiveness of the institution in rankings is an uphill battle. “It is hard to keep up with the Chinese universities, with their increasing investments in research. They even provide cash prizes to those who get published in high-impact journals,” he claims. Mandeli states that UFABC indicators have advanced or remained stable, but the institution has fallen behind in rankings, such as that of Times Higher Education, overtaken by competitors that are improving at a faster rate.

Pedrosa notes that the growth of Brazil’s public university system follows a trend opposite to that of Asian countries. “We established nine federal universities between 2002 and 2005, and nine more in more recent years. Apart from UFABC, with its innovative model, and the technology-focused Federal University of Campina Grande, younger federal institutions have emerged with the goal to increase the number of undergraduate students admitted into college,” he says. “Having universities with an interdisciplinary profile and a focus on research and innovation is important for the country’s development, but that was not the path we chose to take.” Pedrosa has been analyzing the relationship between total expenditures per student and the intensity of graduate activities—both for the federal universities and the three São Paulo state universities, and for public universities in the United States. The initial results illustrate that, for American universities, the intensity of graduate school is directly associated with higher expenditures per student enrolled. In the current research phase, involving the federal and São Paulo state universities, preliminary results show that young federal universities have an average cost per student that is well above what is expected for their profile, characterized by low-intensity graduate school, while the older federal and São Paulo state institutions follow the American trend: the higher the intensity of graduate school, the higher the cost per enrollment. “This situation is concerning at a time when resources for higher education and research are scarce, as these young universities are neither efficient in undergraduate programs, which would fulfill a relevant role, nor are they dedicated to research and innovation, as seen in South Korea,” he warns.

Pesquisa Fapesp 20 Years
The pain and delight of rankings 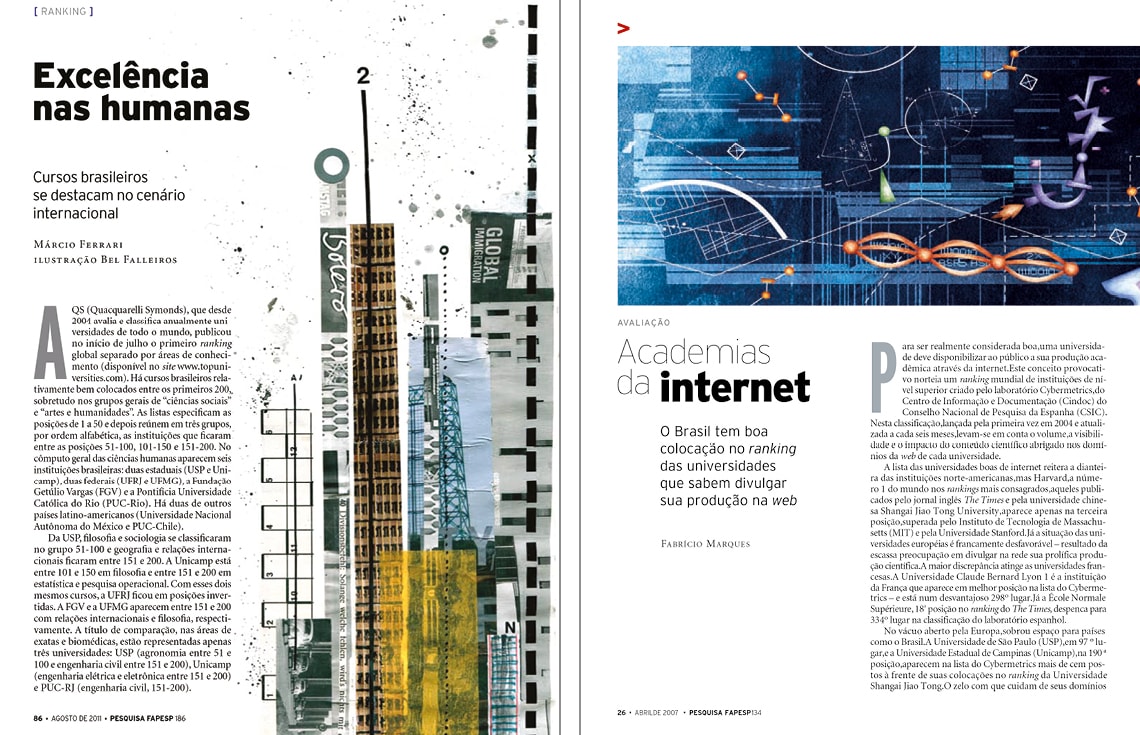 Universities can be compared according to multiple parameters. There are international rankings that combine indicators of scientific impact and excellence in teaching; others value topics such as transparency in the dissemination of knowledge over the internet. There are also those that highlight aspects of the academic environment, such as sustainability initiatives. Each list can be further subdivided into regions or areas of knowledge. “I know at least 20 different rankings that compare international institutions and over 60 that assess universities from specific regions or countries,” says librarian Solange dos Santos, a coordinator for the production and publication of the SciELO Brasil journals. In its 20 years of existence, Pesquisa FAPESP has followed the main rankings and highlighted the work of researchers such as Santos, whose thesis, defended in 2015, analyzed the methodologies of these lists and the difficulties in understanding what their results mean.

Academic rankings have existed since the late nineteenth century, when the United States government first released reports that included university indicators. They gained popularity in the 1980s, when magazines like US News & World Report, in the United States, and Playboy, in Brazil, began publishing university rankings. It was only in the beginning of the twenty-first century that rankings started influencing the strategies adopted by universities. In 2003, Shanghai Jiao Tong University, in China, created an academic excellence ranking, ARWU, based on objective criteria such as published articles and the existence of Nobel Prize winners among their alumni and professors. The idea was to help Chinese students choose universities abroad.

These lists enabled universities to see their strengths and weaknesses—and to be held accountable for them. They ended up becoming marketing tools for top-ranked universities who were interested in attracting more students and expanding funding sources. Several ARWU competitors have emerged since. The main competitor was created by the British magazine Times Higher Education (THE), which combines objective indicators with a university reputation survey of over 10,000 people.

Pesquisa FAPESP has followed the influence of such rankings in 12 articles published since 2005. The first article highlighted how Brazilian universities performed in the first editions of the THE and ARWU rankings. Reflections on ranking methodologies and the dangers of overvaluing them were addressed in 2011. The most recent article mentions the creation of indicator offices at universities, charged with supplying data for international rankings.

“A study carried out in 2014 indicated that 96% of deans monitor the performance of their institutions in rankings,” says Solange dos Santos. Having a negative performance or not being mentioned at all is embarrassing for university administrators, and several countries have created policies to improve the performance of their universities. China, for instance, has channeled investments into a group of institutions and has since gained a more significant representation in these comparative reports. Another consequence has been the creation of a market for the production of rankings and solutions to the problems they identify. “The companies that rank the institutions also sell them consulting services,” explains Santos.