In 2017, FAPESP invested a total of R$1,058,591,892 in 26,026 scientific and technological research projects; of these, 10,186 were new proposals contracted during the year, and the rest were ongoing projects. In nominal terms, the disbursement was 6.9% lower than that in 2016 when R$1,137,355,628 was invested in 26,445 projects, of which 10,480 were new projects. The FAPESP 2017 Activities Report, published in August, is available online at fapesp.br/publicacoes, where it is also possible to consult the foundation’s annual investment summaries all the way back to 1962, which was the year that it was established. 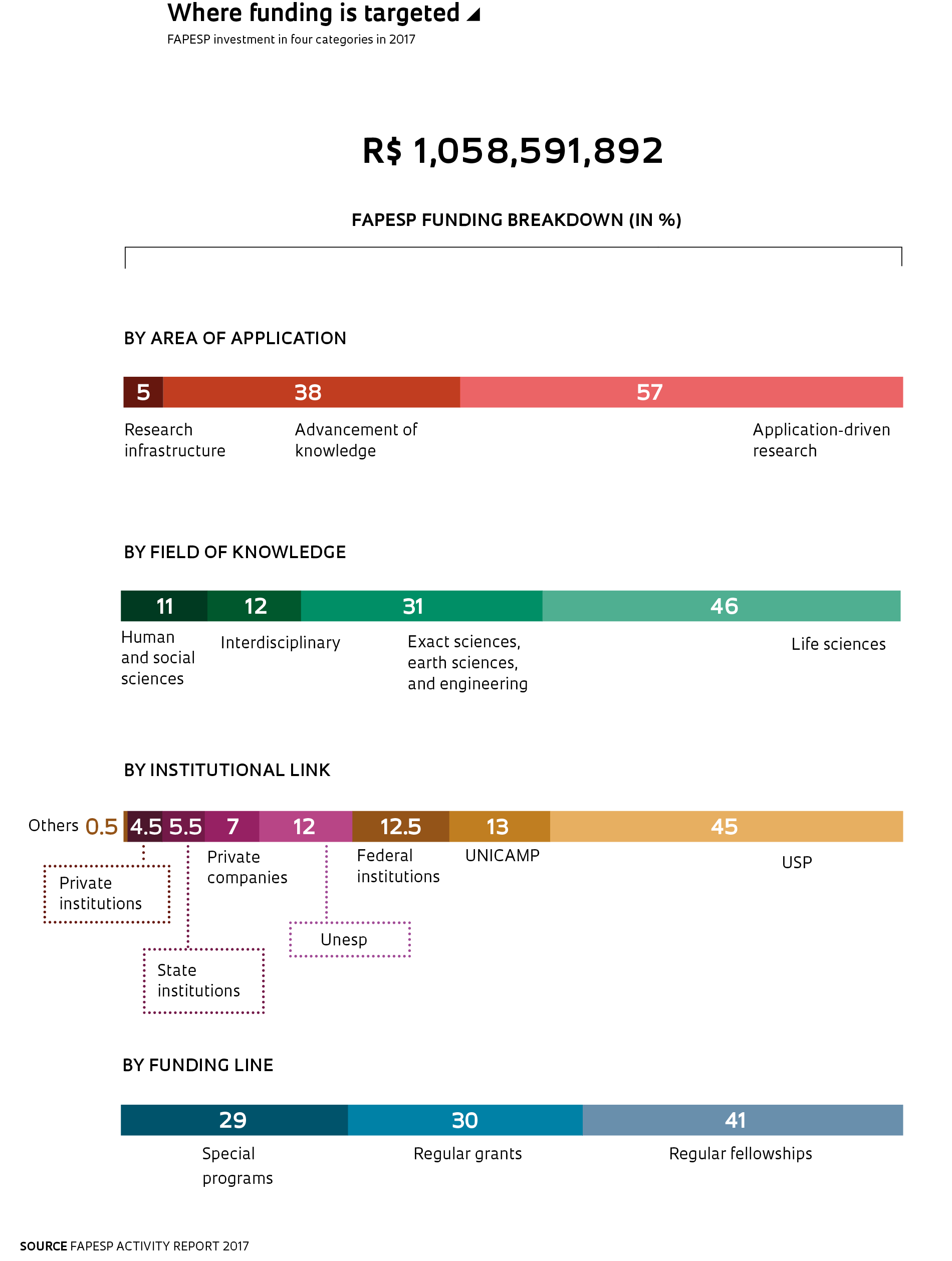 Despite the decrease in the number of agreements with other institutions, FAPESP managed to increase its funding for more daring scientific research, invest more in innovation at small businesses, and increase the number of collaborations between universities and companies. One of the highlights of the last year was the Technological Innovation in Small Businesses (PIPE) program. “The R$71.9 million invested in 2017 was the largest since the PIPE program began,” said physicist José Goldemberg, president of FAPESP between 2016 and September 2018. The program, which celebrated its 20th year in 2017, agreed to more new partnerships than in any other year in its history, 269 projects, which is 18% more than in the previous year, not including fellowships and funding linked to key projects. The result was equivalent to accepting a new project every business day. Over its first two decades, PIPE has supported 2,060 projects at 1,244 businesses in 132 towns in the state of São Paulo. “The small businesses supported by the program are mostly located in places where there are good universities or research institutes, which produce entrepreneurs capable of using modern science and technology to create competitive business opportunities,” wrote Carlos Henrique de Brito Cruz, FAPESP’s scientific director, in a special edition of Pesquisa FAPESP celebrating the program’s 20th anniversary, which was published in December 2017.

Another highlight with respect to supporting collaborations between universities and businesses was the approval of two new Engineering Research Centers, which were officially confirmed in 2018: the Genomics for Climate Change Research Center, which involves the Brazilian Agricultural Research Corporation (EMBRAPA) and UNICAMP, and the Center for Innovation in New Energies (CINE), a partnership among Shell, USP, UNICAMP, and the Nuclear and Energy Research Institute (IPEN). “As an organization, we have talked a lot about energy transition in recent years; we can see that the time for change is coming and will soon become a reality,” said André Araújo, president of Shell Brazil, at the CINE inauguration event. According to the company’s projections, global energy demand in 2060 will be almost 60% higher than it is today; hence, there is a need to invest in the development of new renewable energy sources. 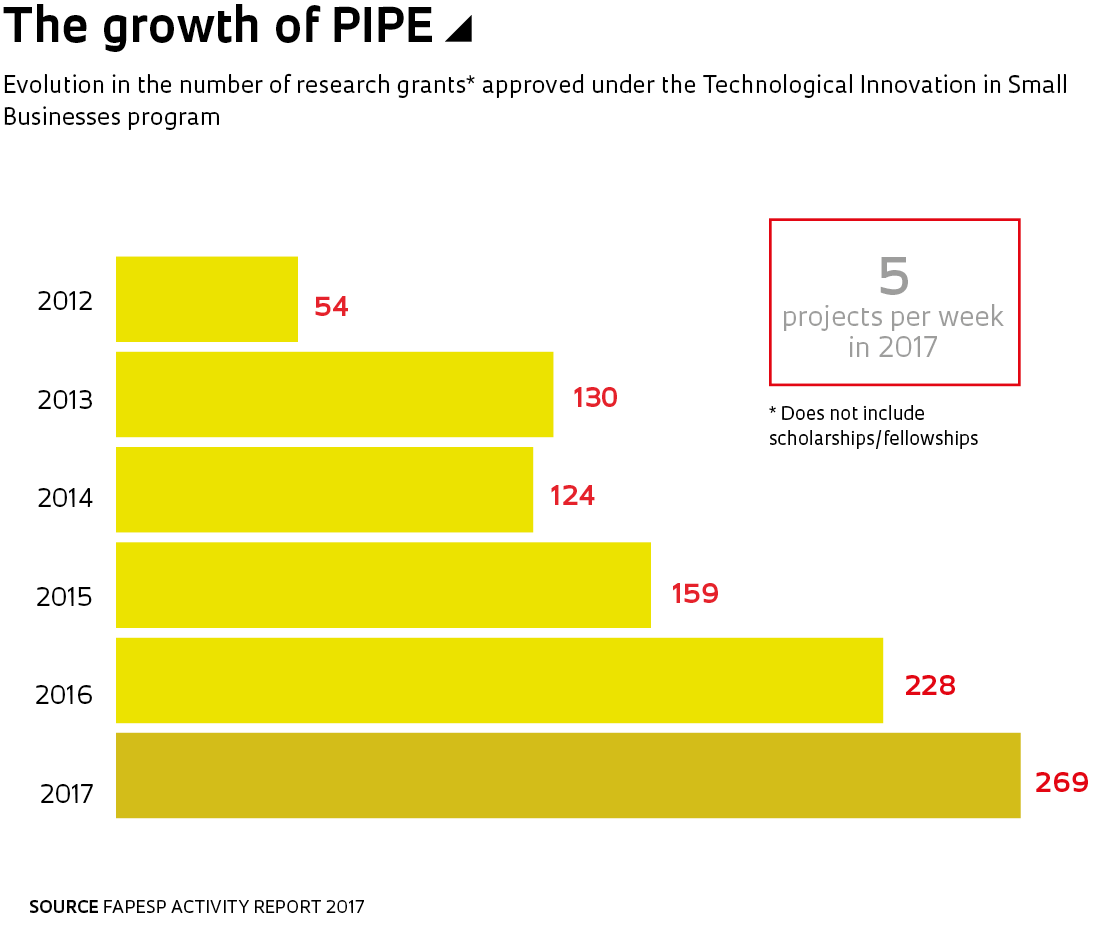 At the new engineering research centers, every R$1 invested by FAPESP is matched by R$1 from the company and R$2 from the university or research institute where the center is based. The two new initiatives have added to the five existing centers that work on innovative solutions such as biofuel engines (Peugeot-Citröen and UNICAMP), gas (Shell and USP), sustainable chemistry (GSK and UFSCAR), new molecular targets against inflammatory diseases (GSK and the Butantan Institute), and wellbeing (Natura and USP). In 2017, R$14.7 million was invested in research conducted at these five centers. Calls for bids were also issued for new centers, this time in partnership with Koppert do Brasil, Statoil, and Grupo São Martinho. FAPESP also coordinates with companies interested in creating research centers in advanced manufacturing engineering.

Thematic projects
In 2017, FAPESP funded 128 new thematic projects, which is 45% more than in 2016 when there were 88, and higher than the average for recent years. This grant mechanism is designed to support research with more daring objectives, developed by teams of researchers from various institutions, over a longer term of up to five years. The growth over the previous year was influenced by a call for proposals by the Brazilian National Institutes for Science and Technology (INCT) program, which was born of a partnership between the federal government and state research funding agencies, and aims to create networks of researchers working in strategic fields and on pioneering issues. FAPESP provides 50% of the funds allocated to INCT institutes in São Paulo and accepted 31 new thematic projects under the program in 2017. Even excluding those projects under the INCT program, the number of thematic projects contracted in 2017 was 97, which is nine more than in 2016. 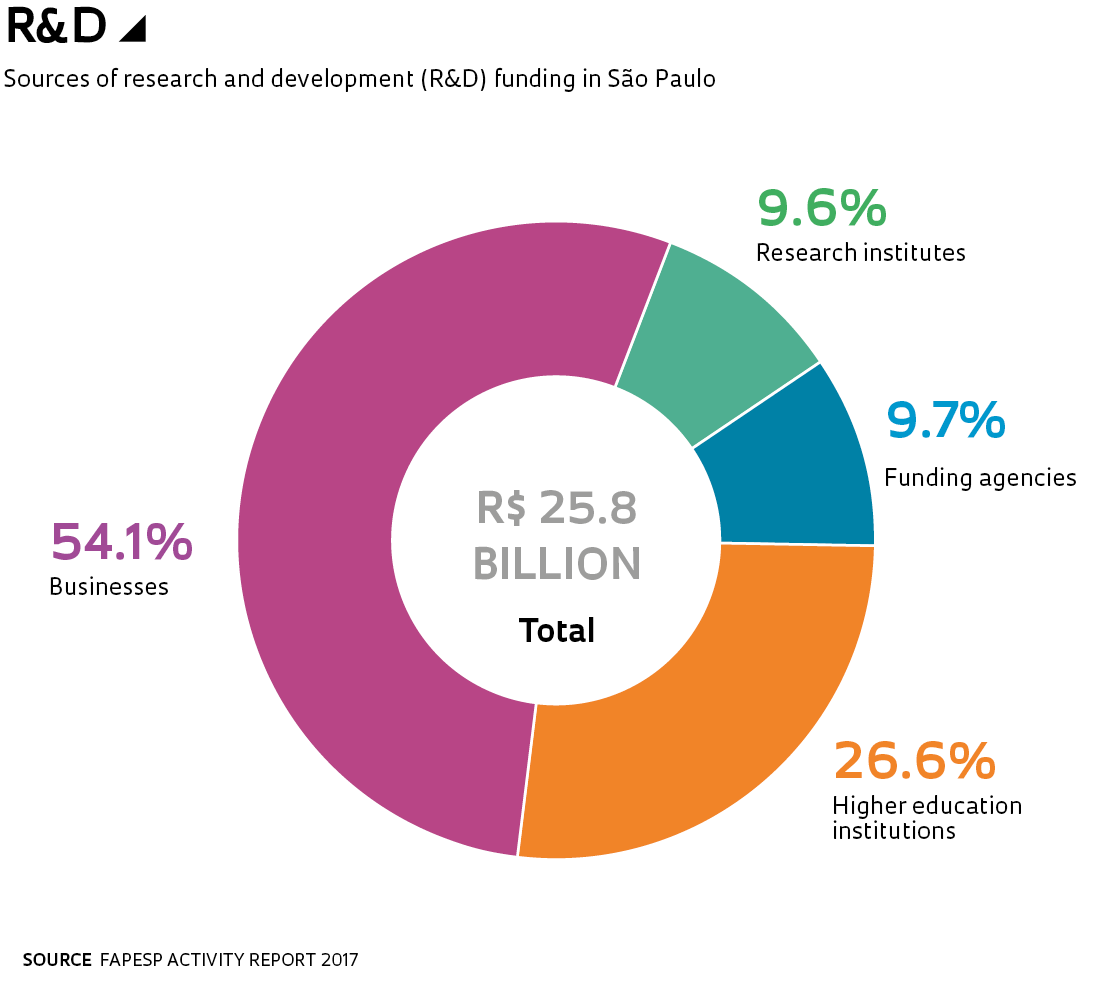 There were 469 thematic projects in progress during the year, receiving a total investment of R$145,664,720. The most commonly funded fields were health (28.11% of the total), biology (18.87%), engineering (8.49%), agronomy and veterinary medicine (8.3%), physics (8.11%), and human and social sciences (7.17%). In the last 5 years, 60 thematic projects involved international collaborations as a result of cooperation agreements among FAPESP, funding agencies from other countries, and international organizations or as part of the São Paulo Excellence Chairs (SPEC) program, which invites renowned scientists from abroad to coordinate research in their fields at universities and laboratories in São Paulo.

In 2017, FAPESP invested R$429,689,013 in 14,034 regular research grants. Just over three-quarters of these funds were used for grants in Brazil, and 24% were used for research conducted abroad. Grants within Brazil were most commonly offered to PhD students (45% of the total), while, for researchers working abroad, 63% of the funding was invested in postdoctoral fellowships. In 2017, FAPESP awarded 904 Internship Grants for Research Abroad (BEPEs), the same number as in 2016. The program is aimed at FAPESP undergraduate, master’s, PhD, and postdoctoral fellowship recipients in São Paulo to help internationalize their research activities. The largest number of these fellowships, which can last anywhere from one month to six years, are located in Europe, with 480 fellows, followed by North America (357), South America (18), Asia (14), Oceania (32), and Africa (3). 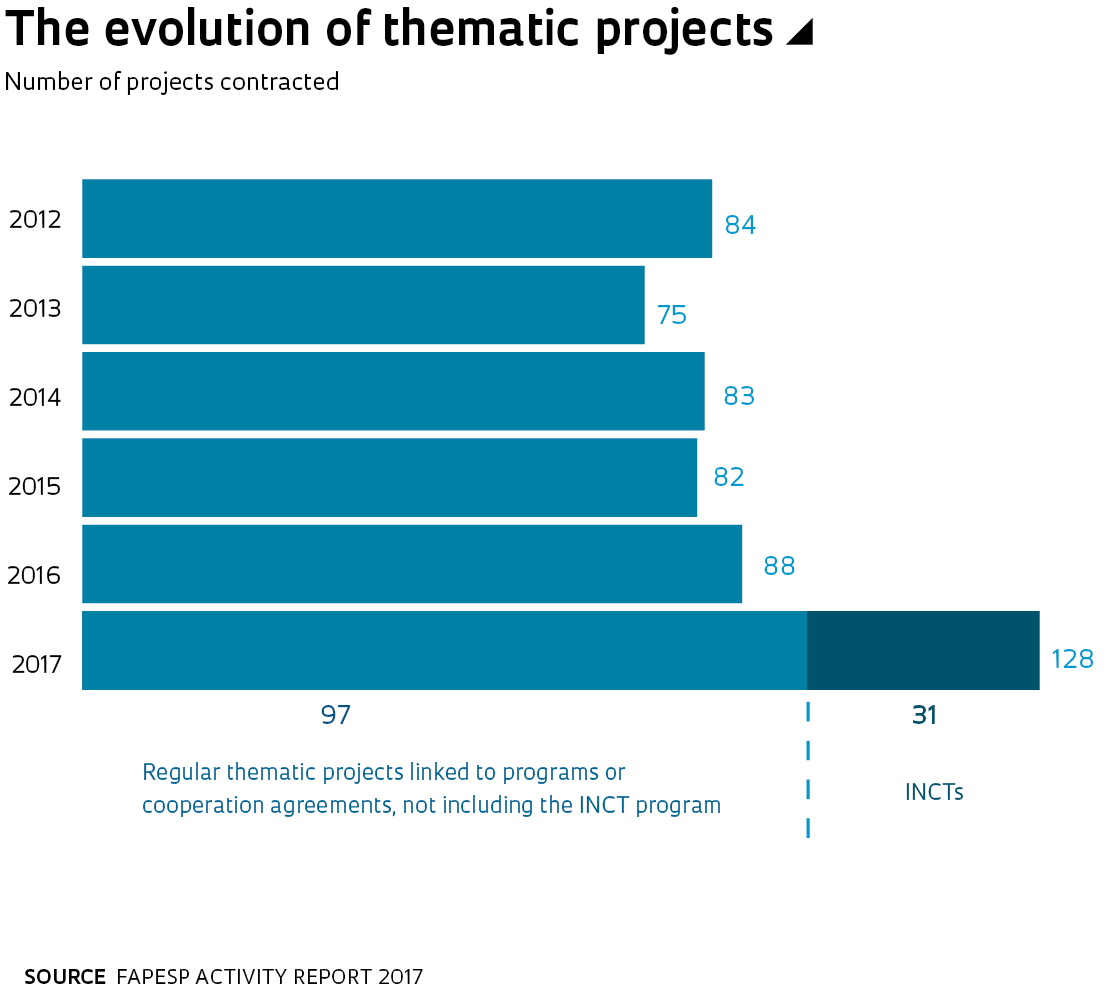 The report also gave a current overview of the science and technology (S&T) structure in the state of São Paulo, comprising 15,000 innovative companies, six public universities, 65 state and federal technology colleges, 34 research institutes and S&T institutions, and 21 private research centers. São Paulo was responsible for 30% of the patents filed with the Brazilian National Institute of Intellectual Property (INPI) and 32% of the computer programs registered. The number of researchers working for state-owned companies was estimated at 39,065, which is equivalent to 62% of the total in Brazil. R&D expenditure in São Paulo, according to data compiled in the report, reached R$25.7 billion; of this amount, 54.1% (R$13.9 billion) came from companies. Higher education institutions, especially the state universities of São Paulo, accounted for 26.6% of this figure, followed by federal and state government funding agencies (9.7%) and federal and state research institutes that operate in São Paulo (9.6%). Businesses are playing an increasing role in R&D, particularly in São Paulo, although this has not translated into the greater representation of Brazilian companies on the global market. According to data compiled by the Brazilian Association for Research and Development of Innovative Companies (ANPEI), Brazil’s private sector invested more in R&D prior to the economic crisis, at a similar percentage of national GDP as Spain, but obtained a significantly lower number of patents. A survey comparing patents granted in the United States shows that Brazilian companies were awarded 197 patents per year between 2011 and 2015, while Spanish companies achieved a yearly average of 524 over the same period. Figures showing the same trend were published in the Data section of Pesquisa FAPESP in July 2016 (bit.ly/2Ow2PG9).

The graduate system in São Paulo produced 7,288 doctors in 2017, which is equivalent to 34% of the total in Brazil, and 11,384 master’s graduates (23% of the national total). USP was the leading institution in this regard, with 3,006 PhD and 3,467 master’s graduates. The report also shows how the impact of scientific output has evolved. In 2016, articles by authors from institutions in São Paulo had an average impact of 1.04, compared to 0.91 in 2015. This is the first time that this value has surpassed 1. Therefore, on average, each article produced has been cited at least once by other papers. The relative impact of publications by Brazilian authors in 2016 was 0.89. 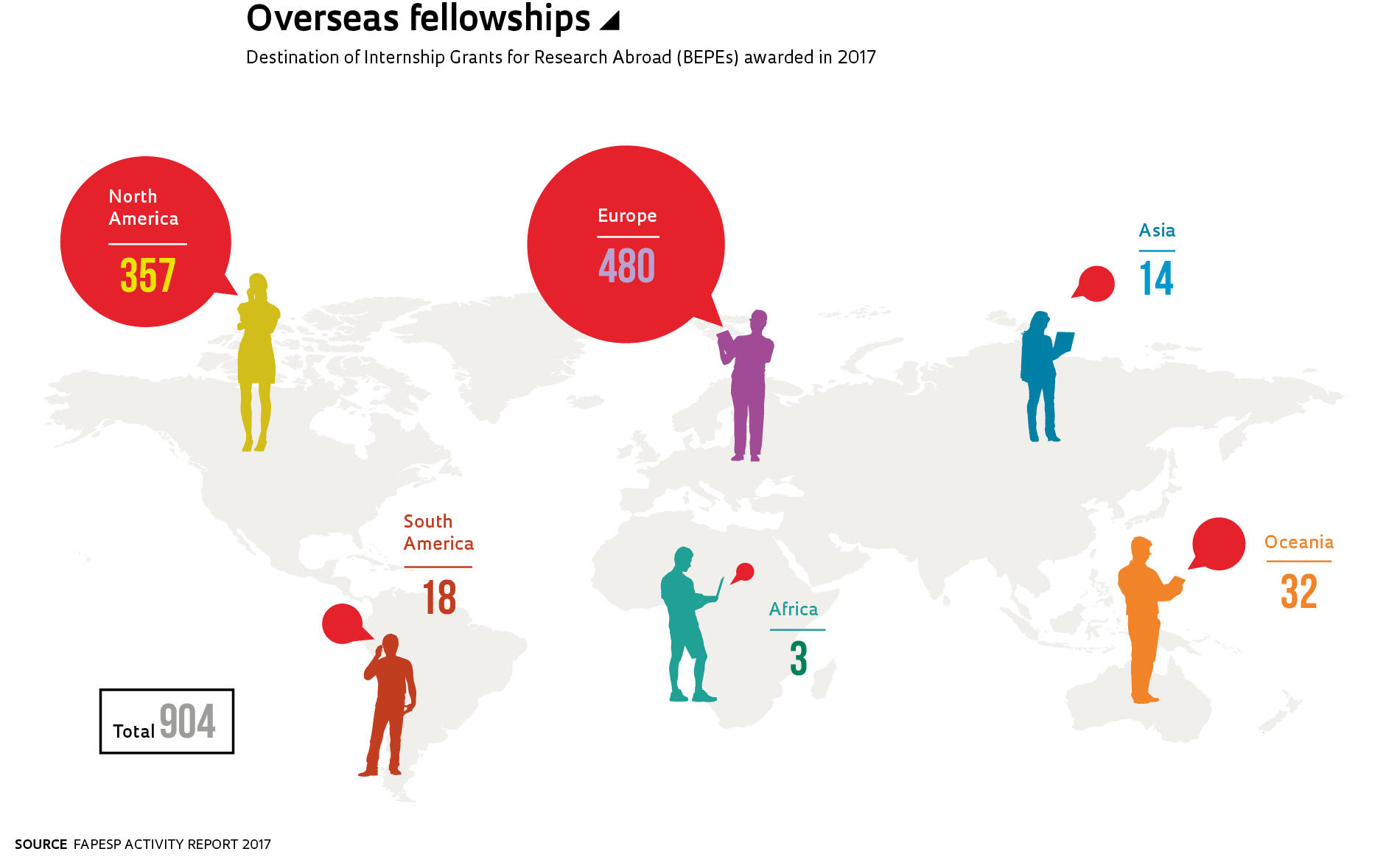