A point cloud produced from three-dimensional laser scans of an alley in Rocinha, a massive hillside favela in Rio de Janeiro

Three-dimensional laser scanning (3DLS), a technology used to create digital representations of real-world objects in applications such as preserving historical and cultural heritage and in the oil and gas industry, is now being used to create digital three-dimensional maps of Brazil’s favelas. The most ambitious of these projects is capturing the slumscape of Rio’s Rocinha, Brazil’s largest favela. Another of the city’s favelas, Santa Marta, has been previously mapped using analogous tools, producing a similar output to 3DLS. The goal in each of these initiatives is to generate actionable insights that can inform local community improvements.

Brazilian researchers at the Michigan Institute of Technology’s (MIT) Senseable City Lab have recently completed a pilot mapping run in a portion of Rocinha, and are now fundraising to extend the project to the entire community. Their goal is to digitally reconstruct the favela’s vast and chaotic maze of stairways, masonry structures, and intricate alleyways too narrow for cars or even motorcycles to pass. If successful, the project could be replicated in other informal settlements around the world.

Disorganized urbanization, poor public services, and irregular land occupation are some of the features of urban areas that the Brazilian Institute of Geography and Statistics (IBGE) terms as “subnormal settlements.” Favelas, stilt slums, and mocambos are some examples of subnormal settlements found in Brazil.

Located on the south side of Rio de Janeiro, Rocinha had 25,742 dwellings in 2019 according to IBGE estimates. The exact number of people living in the settlement has not been determined, with estimates ranging from 69,000 to 220,000 people, according to IBGE. The difficulty in estimating the approximate number of residents is explained by the slum’s disorderly development on 95 hectares of rugged terrain.

“Rocinha is huge. We have attempted to arrive at rough estimates of its size, only to find that there are additional streets or alleys we haven’t accounted for,” says systems analyst Carlos Coutinho, a director at BRtech3D. In 2020 his firm laser-scanned two small areas of Rocinha as an idea proposed by architect and urban planner Washington Fajardo, Rio de Janeiro’s Secretary for Urban Planning. This served as a pilot for a project, called Favelas 4D, launched by MIT to digitally map the entire favela.

“Informal settlements are rarely mapped. The use of conventional cameras typically meets resistance due to privacy issues. In contrast, LiDAR (Light Detection and Ranging) laser scanning is a noninvasive technology that can be used for three-dimensional mapping at high-resolution,” explains architect Fábio Duarte, the lead researcher at Senseable City Lab and a professor in the Graduate Program in Urban Management at the Pontifical Catholic University of Paraná (PUC-PR). 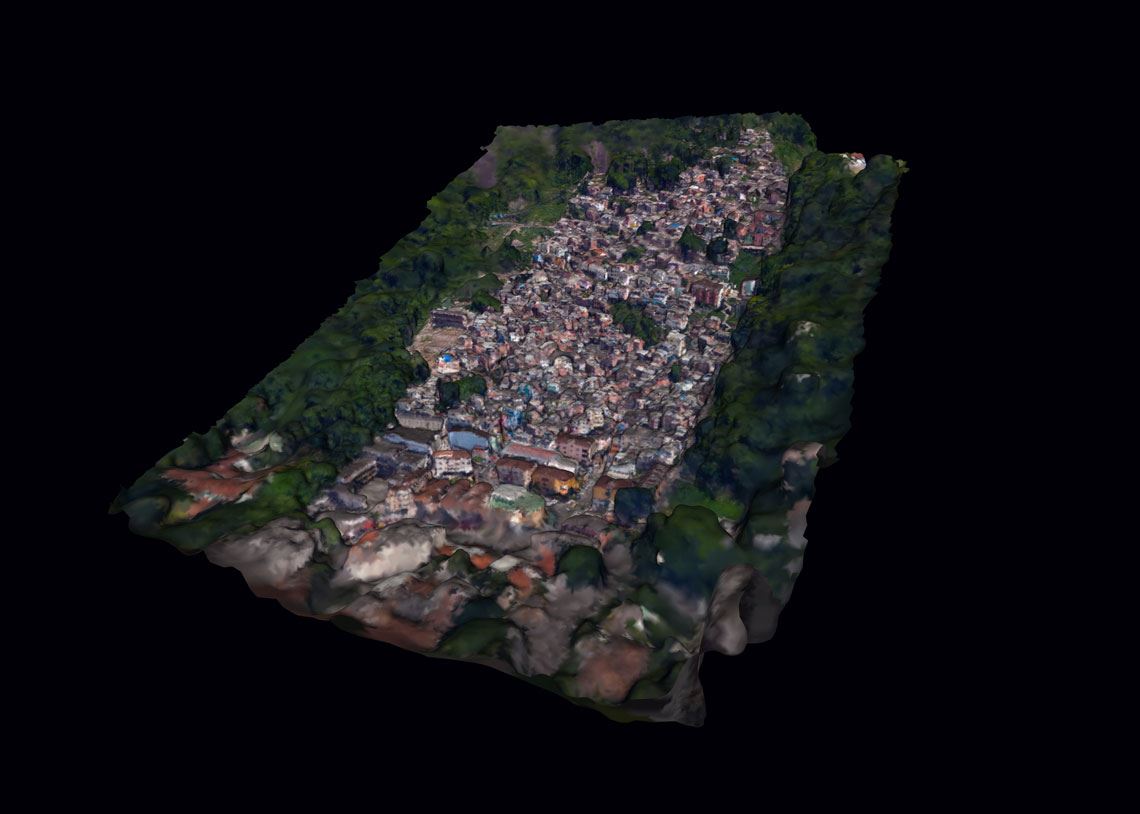 Point clouds
In three-dimensional laser scanning, a tripod-mounted scanner emits laser pulses onto the surface being scanned—such as an alley or a house. The beams are reflected off the surface to a sensor coupled to the scanner. The combination of the return time and the angle of the reflected light generates a spatial coordinate (x, y, z). The resulting point cloud captures the shape of the surface in a way that supports accurate measurement even of the most complex geometries and geographies (see Pesquisa FAPESP issue nº 293).

The pilot project in Rocinha scanned a single street and a playground, covering a total area of 480 square meters in two days, shortly before the novel coronavirus outbreak in 2020—coverage of the entire favela is likely to take four months. Two scanners with millimeter resolution were used, says Coutinho. Each scanner, weighing approximately 5 kilos, has a field of view of 360 degrees by 315 degrees. “This means it captures almost everything, except the tripod area beneath the scanner. We captured up to 1 million points per second,” says Coutinho.

Each scanned area has approximately 50 scenes, meaning the scanner had to be positioned at 50 different locations to capture the structures from all angles. The project will help to develop and improve the algorithm used for mathematical analysis of informal settlements so the method can be replicated in other settlements around the world. Similar projects are underway in Africa and India, explains Coutinho.

“With 3D laser scanning, we can precisely capture the morphology of a slum and use that data to assess risks, such as landslides, and to determine the exact location of each house,” explains Duarte. “This can help residents in Rocinha to formalize their postal address, a requirement for eligibility to several public services.”

With more accurate data, city planners can better design stormwater and sewer systems according to the slope and elevation of an alleyway, and better organize power and telephone lines. Garbage collection and street cleaning can also be better organized. In short, by providing a better understanding of the slum’s architectural features, the project will put residents in a better position to secure a range of public services.

“Through this project, we hope to create an innovative, evidence- and data-driven approach to public services in favelas. We want to create a big data approach to favelas,” says Fajardo. “The Favelas 4D project will make urban improvements more efficient and effective, and support efforts to provide decent housing, intelligent infrastructure, and better public health care, as well as supporting land titling in these communities.”

In a paper published in April this year on the arXiv preprint (non-peer-reviewed) platform, the researchers at Senseable City Lab describe how of the roughly four billion people living in cities worldwide, nearly one billion live in informal settlements. The paper, cowritten by Costa Rican Arianna Salazar Miranda, a doctoral researcher at MIT, as lead author, notes that “although often massive, these settlements are largely impervious to traditional mapping technologies, making them invisible and devoid of urban rights.”

In Rocinha, only 23% of total street distance is included in Google Street View, a platform that provides panoramic, 360-degree images of city streets around the world, captured by car-mounted cameras. The limited coverage, the authors explain, was because only that fraction of the settlement could be smoothly captured from a car.

Other mapping methods also have their limitations. Aerial imagery captured by satellites or drones provides little information about conditions in each community, as it is difficult to measure what is beneath the rooftops seen from above. Researchers typically use five metrics of street and façade characteristics to describe the morphology of informal settlements: street width; street elevation; facade heterogeneity, facade density, and street canyon.

The 3D scanning project in Rio de Janeiro is currently competing in the Global Mayors Challenge 2021, an international innovation competition that is offering a prize of US$1 million to 15 cities around the world to implement breakthrough ideas for dealing with major urban challenges post-pandemic. Rio has passed the first stage of the contest, which selected 50 out of 631 candidate cities. The challenge was launched by nonprofit organization Bloomberg Philanthropies, founded by former mayor of New York Michael Bloomberg. Winning the prize would mean the scanning project would have more funding available than BRtech3D initially expected. For now, Rio’s Office for Urban Planning is looking to secure funding for the program elsewhere.

Architect and urban planner Debora Verniz has conducted a separate three-dimensional mapping project in Santa Marta, a hillside favela on the south side of Rio de Janeiro, home to approximately 8,000 people, as part of her doctoral research at Penn State University. “We started the project in 2015. We didn’t have the funding at the time to bring a scanner from the US to Brazil, so we instead ran our survey with a GoPro camera programmed to capture images every 3 seconds,” explains Verniz. “We then used photogrammetry software to convert the images into point clouds. LiDAR laser scanning also generates a point cloud, but at higher resolution.”

The GoPro camera collected approximately 4,000 images of the favela’s main streets, covering approximately 30% of the area, says Verniz. A second camera captured 360-degree images at around 100 strategic points. These materials were then used to create an immersive virtual reconstruction of the neighborhood.

“Santa Marta was used as a case study for the development of a parametric design tool for complex urban environments,” explains the researcher. Parametric design is a type of computer-assisted design (CAD) method in which restrictions and relationships are established among design parameters (such as dimensions). These parameters can be automatically changed to facilitate design in architecture and urban planning projects.

Three-dimensional laser scanners are part of the arsenal of technologies now used in law enforcement to solve crimes. For example, the São Paulo Crime Scene Investigation Department (SPTC) used laser scanners to reconstruct a crime scene involving the deaths of nine teenagers during a police raid on a “funk party” (baile funk) in Sao Paulo’s Paraisópolis favela, in December 2019.

“This was the first time we reconstructed a crime scene using 3D scans in São Paulo,” says forensic investigator Karin Kawakami De Vicente, of SPTC. She led the field team of agents from the Civil Police’s Homicides and Crimes against Persons (DHPP) division. “We scanned the main street in Paraisópolis and the two alleys where the teenagers died of asphyxiation due to a stampede. The digital reconstruction helped us to understand crowd movement and flow.”

The 3D reconstruction of the slum environment was developed using 32 scan points, explains Kawakami. The investigators also used 1,588 aerial images captured from drones, which were then converted into point clouds and blended with the 3DLS point clouds. “Laser scanning allowed us to reconstruct the crime scene with millimeter resolution, creating a highly detailed model of the site. This allowed us to determine how many people those narrow streets could accommodate safely,” says Kawakami. “We’ve used laser scanners in hundreds of crime scene investigations since they were first introduced at the department in October 2020.” In July, the Civil Police indicted nine military police officers for manslaughter for their role in the raid that led to the tragedy in Paraisópolis.