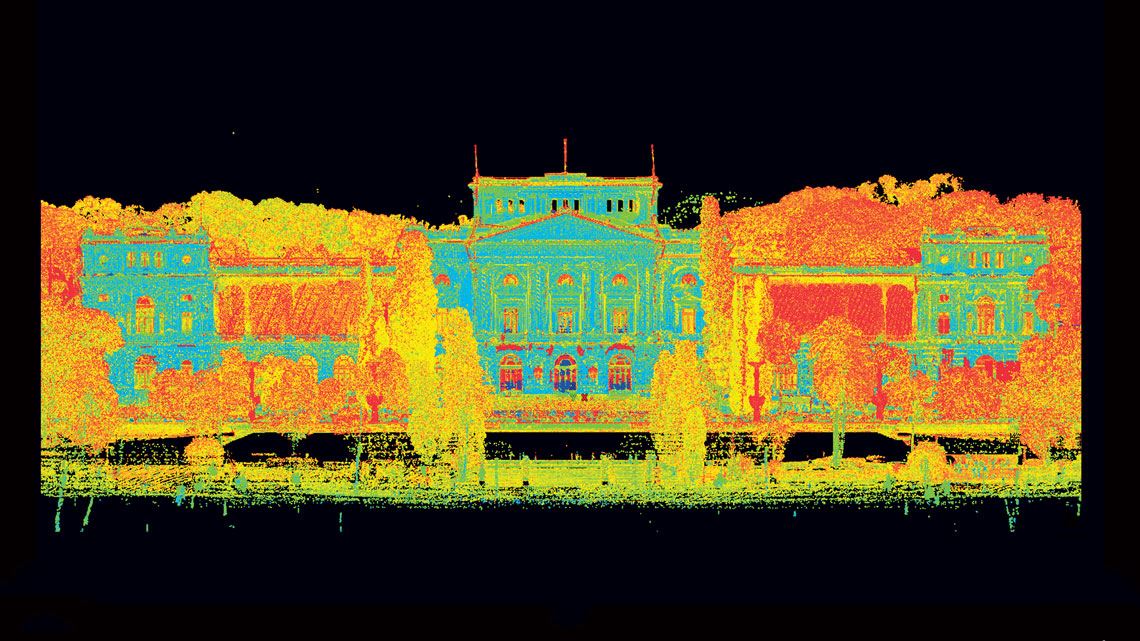 A 3DLS point cloud rendering of the Paulista Museum facade, in São Paulo

In April last year, less than a week after a fire engulfed the Notre-Dame de Paris, destroying part of its roof and spire, a team of conservation and restoration specialists entered the almost millennium-old building to assess the extent of the damage. In a single day, they created a detailed model of what had been destroyed and what had been left intact in the French cathedral—one of the world’s most iconic examples of Gothic architecture. Three-dimensional (3D) laser scanners helped them to quickly and accurately collect the data they needed for the reconstruction effort. The information they captured was then compared with scans of the cathedral taken over the past 10 years, in particular the detailed 3D models produced by the Belgian art historian Andrew Tallon (1969–2018), a professor at Vassar College in New York State.

A few days after the Notre-Dame fire, a similar but less high-profile incident occurred in Monte Santo, a town of 50,000 people about 360 kilometers (km) from Salvador, in Brazil’s arid northeastern state of Bahia, where the local parish church caught fire. The city is famous for having served as a staging point for Federal troops during the War of Canudos (1896–1897), in their campaign against Antônio Conselheiro, a religious leader who had settled in the area years prior. Luckily, the 1927 church in Monte Santo, like its more celebrated French counterpart, had been laser-scanned before the fire. This is especially fortunate given that 3D laser scanning (3DLS) is an expensive and complex technology that is still rarely used in Brazil for documenting historical and cultural heritage.

“I contacted IPHAN [the National Institute for Historical and Artistic Heritage] in Bahia to tell them that we had produced a laser model of the church at UNICAMP [the University of Campinas] which could aid the restoration work. The agency expressed immediate interest, but the restoration work has now been suspended amid the pandemic,” says Timóteo de Andrade Ferreira, an architect who developed the model as part of his master’s research under Regina Andrade Tirello, in a graduate program in architecture, technology, and city planning at the School of Civil Engineering, Architecture, and Urban Planning at UNICAMP. 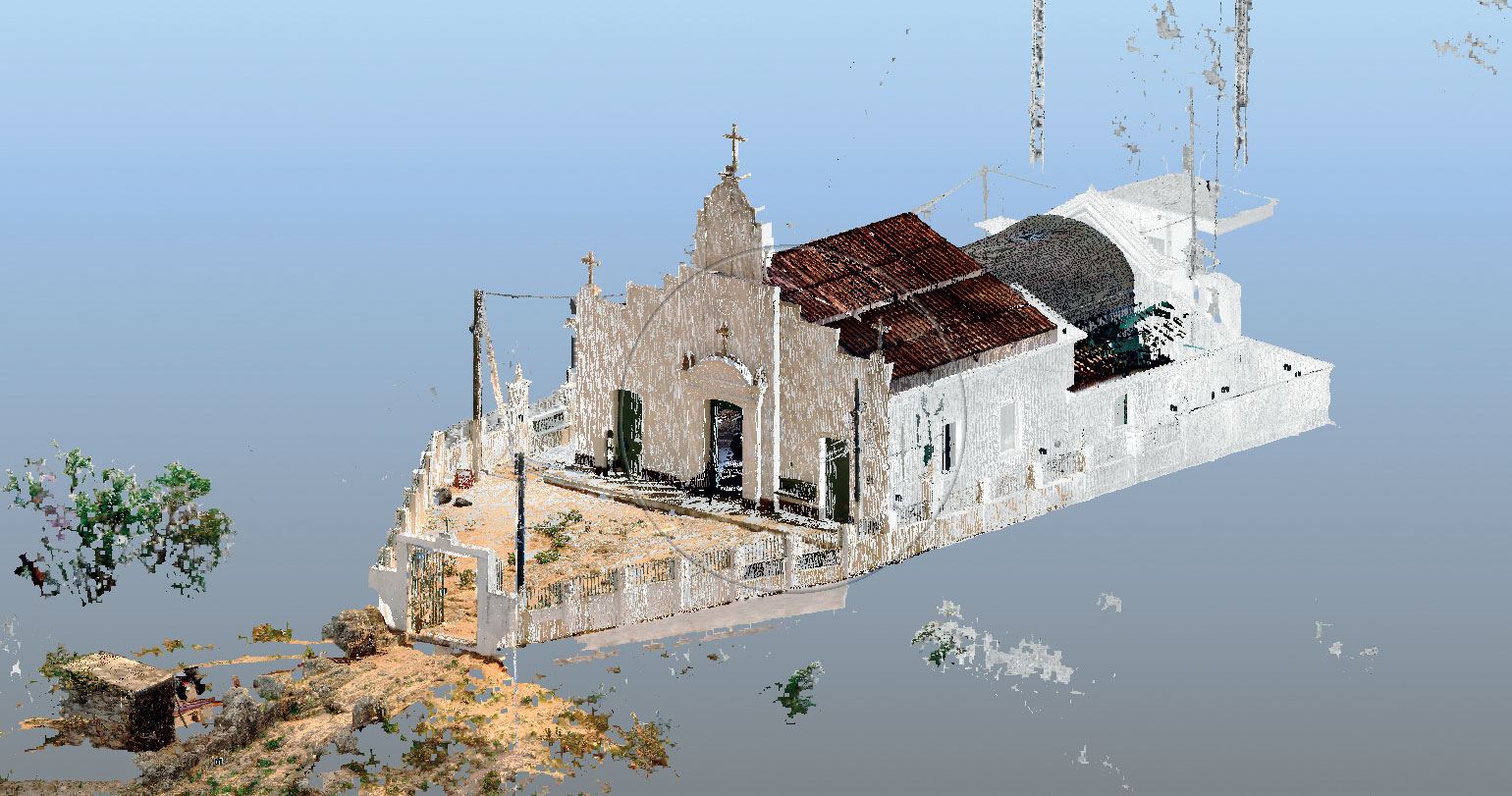 The church is not properly a historic monument of the War of Canudos, having been built only decades later. But it interested Ferreira because he was born in a quilombola community near the town. His modeling work captured not only the church proper, which was declared an IPHAN heritage site in 1983, but also the surrounding architectural, urban, and natural landscape, including non-heritage buildings and streets. Ferreira borrowed equipment from the São Paulo–based company Kemp Projetos e Gerenciamento, a high-tech engineering design and architecture firm where he has worked for 10 years.

“With this equipment we were able to scan large areas of the town in just six days, a task that would take months using conventional methods,” he says. It then took a month to process the information he collected. Ferreira took scans at a total of 96 points at the site, where his tripod-mounted laser scanner captured 360-degree images around its axis (see infographic).

A pioneering project
Ferreira’s research aimed to expand on the existing architectural inventory of local heritage sites, and document their development and potential degradation over time. As a starting point, he used survey data collected in previous decades by the Bahia Cultural Heritage Inventory (IPAC-BA) and by IPHAN. He also used images from the 1940s taken by the French-born Brazilian photographer Pierre Verger (1902–1996).

“This documentation provided a baseline for assessing the city’s growth and the current integrity status of the site’s architecture. Combining 3D laser scanning with conventional methodologies can provide an important tool for documenting built heritage,” says Tirello. “Ferreira’s research is pioneering both in its scale—the study covered large areas of urban landscape—and because the subsequent processing was done at multiple locations in Brazil as part of a multi-stakeholder academic research project.”

In his fieldwork, Ferreira combined 3DLS with digital photogrammetry—or the measurement of distances and the real-world dimensions of objects from photographs—a more affordable technology widely used by engineers and architects. The advantage of ground-based tripod laser scanning over this and other techniques, such as DSM (Dense Stereo Matching), is that it automatically produces what is referred to as a point cloud, the most basic representation of a three-dimensional object using Cartesian (x, y, z) coordinates, explains civil engineer Arivaldo Leão de Amorim, a researcher at the Laboratory of Advanced Studies in City Planning, Architecture, and Digital Technologies (LCAD) at the School of Architecture of the Federal University of Bahia (UFBA). LCAD has two decades of experience using digital technologies to document architectural heritage sites in Bahia.

The main roadblock to the widespread use of 3DLS technology, says Amorim, is its higher cost compared to conventional technologies. “A laser scanner for use in architecture applications costs upwards of US$40,000, and is only available outside Brazil. A good professional camera can be purchased locally for R$10,000 and a drone to attach it to for aerial images comes at roughly the same price,” says Amorim. In addition, 3D laser scanners are still too heavy a payload for drones. Laser scanning, however, is a more complete technology as it allows measurements to be carried out at night and from great distances. The laser scanner can be positioned up to 800 m from the object, explains Amorim.

After it is processed using special software, the point cloud data captured by the 3DLS equipment can be used to build geometric or physical models of buildings, monuments, and objects. These models, an alternative to conventional approaches to documenting historic buildings, can also be used to showcase the artistic or architectural heritage of a location and to raise awareness among the public and government officials about its importance. They also provide a source of tourist information, and can be used to preserve a detailed record of buildings that will be demolished, or to rebuild structures that have been damaged.

In Brazil, 3DLS technology is used most extensively in the oil, construction, and related industries, but now increasingly in the study and preservation of historical and cultural heritage. In 2015 and 2016, parts of the facades of the School of Architecture and Urban Planning at the University of São Paulo (FAU-USP) were laser-scanned as part of a Getty Foundation–sponsored project for the long-term preservation of modern buildings. The project was developed as a collaboration between the University of São Paulo and DIAPReM at the University of Ferrara, in Italy, a research center specializing in advanced surveying methods for monument restoration. “Scanning offers a much more accurate rendition of a built object than surveying by traditional methods,” says Beatriz Mugayar Kühl, a professor of architecture at FAU-USP. 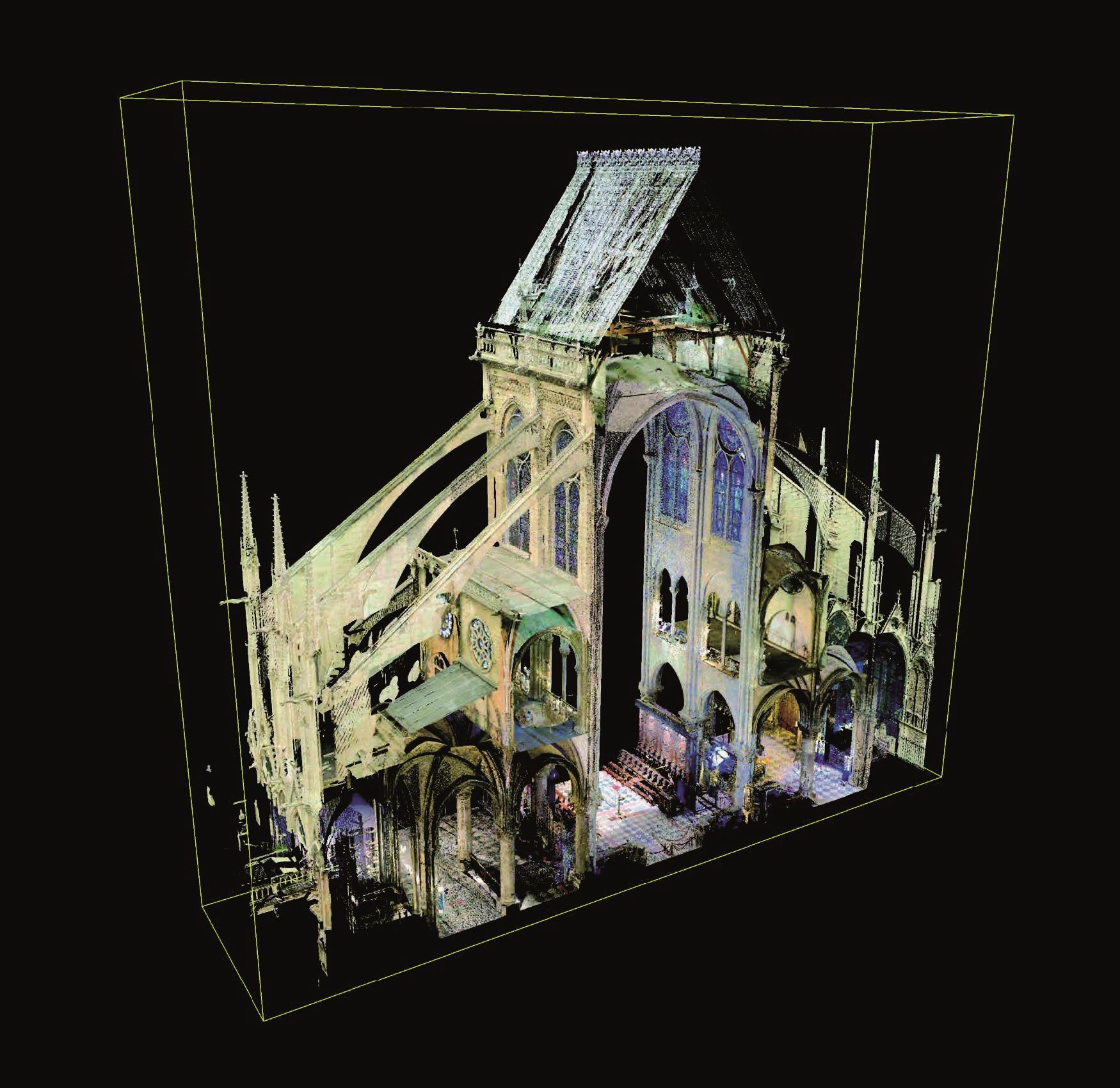 A detail of the 3D model of the Notre-Dame de Paris, which was partially destroyed by a fire in 2019Andrew Tallon / Vassar College

Conventional measurement techniques, she explains, normally capture only the angles and intermediate elements of a room, and distances from one point to another are measured at one-meter intervals. In laser scanning, the spacing between points drops to millimeters, allowing surveyors to capture the fine details of the surface being measured, such as minute undulations on a wall. “When surveying a rectangular room, you generally assume that the room’s different angles are connected by straight lines. But with laser technology, these lines acquire much greater detail than in the traditional method, as instead of one large line between points they consist of a plurality of line segments.”

This information, when intersected with other data, can be useful in efforts to preserve heritage sites since it can reveal problems that are invisible to the naked eye, such as moisture and vermin. “It isn’t an X-ray of the structure. But it can detect anomalies at a given point in relation to the surrounding healthy surface, suggesting something is going on.”

The DIAPReM center also built a 3D model of the Paulista Museum building at USP, better known in Brazil as Museu do Ipiranga, on the south side of São Paulo. The 3DLS scans were taken in August 2017 and the final processed point cloud was delivered to USP the following year. In addition to capturing the precise geometry of the building and the contours of degraded surfaces, the project also provided an opportunity to train students, says Kühl. “The tool is highly valuable, but isn’t a do-all solution on its own. Scans that are poorly executed can lead to serious misinterpretations.”

The concepts and the different potential applications for 3DLS technology in museums were explored in a recent paper by two researchers from USP in the journal Anais do Museu Paulista. “3DLS can be very useful, for example, to document or reproduce an object that cannot be manually handled,” says civil engineer Jorge Pimentel Cintra, a professor at Paulista Museum who coauthored the paper. Other possible applications include the production of replicas of high-value, fragile, or heavy objects for exhibition at other museums, and the development of scale models and virtual exhibitions. 3DLS can also improve the museum experience for visually impaired visitors by letting them touch and feel replicas of works of art.

3D laser scanning is among the lines of research at the Design and Materials Selection Lab (LdSM) at the Federal University of Rio Grande do Sul (UFRGS). Building on a three-year program funded by the Research Foundation of Rio Grande do Sul (FAPERGS), the group has continued a project to digitize elements of cultural heritage, such as street monuments, works of art, and museum collections. “We use laser scanning but also other processes,” says Fábio Pinto da Silva, a professor of mechanical engineering at the UFRGS Department of Design and Graphic Expression, who leads the research group at LDSM. Silva, who has been involved in this field since 2002, has closely followed developments in laser scanning technology and equipment.

In 2011, it took him 12 hours to scan a single statue, the Monumento ao Laçador. The official symbol of the city of Porto Alegre, the statue stands 4.4 m tall on a 2.2 m pedestal. The digitization project was commissioned by city authorities and required an aerial bucket truck with a 25 m telescoping boom to position the 3D scanner approximately 1 m from the statue, at different angles. “Today’s equipment is much more modern and precise,” says Silva. The model he created of the statue is now featured on the LDSM website (www.ufrgs.br/ldsm/3d/monumentos-poa/lacador). Thanks to 3DLS technology, part of Rio Grande do Sul’s gaúcho heritage is being safely preserved.