Researchers monitoring 215 bird nests over five years in the Carlos Botelho State Park, a 37,000-hectare area of Atlantic Forest in the interior of the state of São Paulo, have observed a previously unseen phenomenon: their motion-sensing video cameras captured infrared images of bats attacking bird eggs and chicks. The assaults were filmed in five nests belonging to four different bird species whose nurseries were being monitored with the aid of 65 cameras. The parents were always away from the nest when the incidents occurred. “We knew that bats sometimes feed on adult birds, and vice versa,” explains biologist Mercival Roberto Francisco of the Federal University of São Carlos (UFSCar), leader of the team responsible for the study. “But this is the first time bats have been observed acting as predators in bird nests.” The attacks were described in an article published in the Journal of Avian Biology on November 1.

Only fragments of the events were captured on video. The bats move very quickly and the cameras, which are set up 1 to 3 meters from the nests, were not designed to record long captures. After being triggered, they record for 30 seconds uninterrupted and then stop for 3 seconds. In two attacks on the nest of a thrush (Turdus flavipes) with two chicks, the researchers identified the species of the aggressor: the carnivore Chrotopterus auritus, commonly known as the big-eared woolly bat or woolly false vampire bat. Another assault, this time on the nest of a blue manakin (Chiroxiphia caudata), also with two chicks, was attributed to the same species, although with less certainty. In the first case, both chicks were missing after the event. In the second, one remained. “The videos don’t show the bats eating the chicks,” says biologist Daniel Perrella, the study’s lead author, who defended his PhD at UFSCar last year with data from observations made in the park. “But when we visited the nests after the attacks, the chicks were gone.” 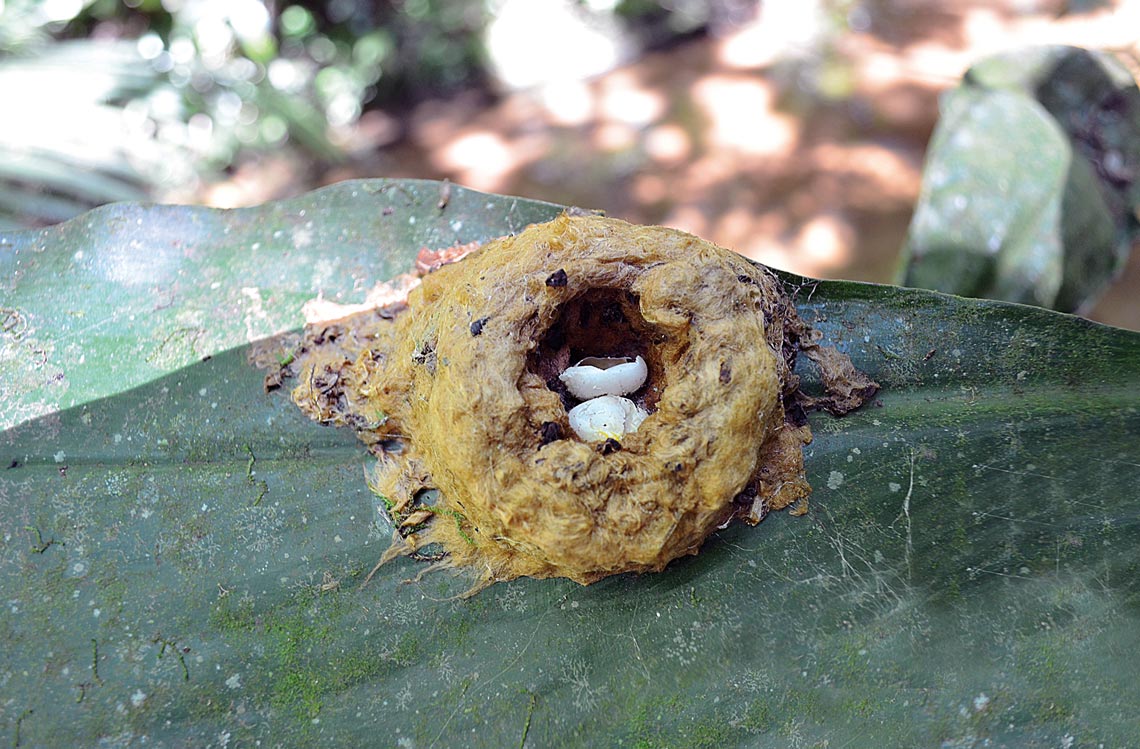 The other three attacks, for which the images were less clear, were attributed to insectivorous or generalist (omnivorous) specimens of the Phyllostomidae family, to which the big-eared woolly bat also belongs. The targets of these aggressions were the nests of an Atlantic royal flycatcher (Onychorhynchus swainsoni) with two chicks, another of the same species with an egg, and a black jacobin hummingbird (Florisuga fusca) with two eggs. Again, there were no direct images of the bats breaking and eating the eggs, but some of the videos did capture what appears to be the predators moving inside the nests. When the biologists later checked the hummingbird’s nest, they found the eggs broken and empty inside.

It is not known how the bats find the nests in the dark environment; whether they are guided by sound, smell, or echolocation, through which they emit ultrasound to find their way in low light. For Francisco’s team, the most important message provided by their findings is that bats should be considered significant predators of bird nests, alongside land mammals, snakes, other birds, and even invertebrates. In the five years of monitoring at Carlos Botelho State Park, the cameras recorded 61 attacks on nests. Most were perpetrated by nonflying mammals and other birds. In third place, with 8% of the total, were bats, ahead even of reptiles. “The observations open new avenues for research into bat diet and predation, but in my view, these nest attacks could be random opportunism,” says biologist Renato Gregorin of the Federal University of Lavras (UFLA), a bat specialist who did not participate in the study.