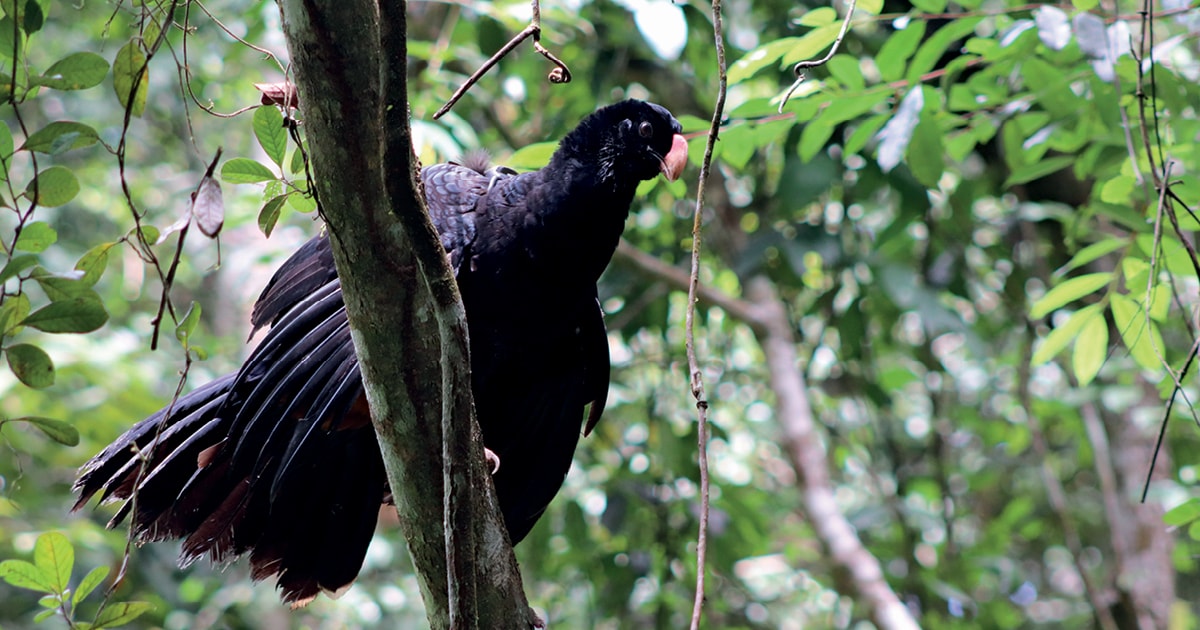 A female Alagoas curassow released in a forest patch in Rio Largo, a municipality near Maceió

On September 25, three male and three female specimens of Alagoas curassow, a bird species declared extinct in the wild 40 years ago, were reintroduced into their natural habitat, the Atlantic Forest in Alagoas. The three young couples were bred from animals raised in captivity as part of a research and conservation project that has successfully prevented the complete disappearance of this galliform species, following its reduction to just three individuals. The birds were released into a private reserve with almost 1,000 hectares of unbroken forest in Rio Largo, a municipality just over 20 kilometers from Maceió. The reserve has a 400 square-meter aviary, but the birds—all aged between 1 and 2 years—are not kept in confinement and are free to roam the entire property and its adjoining cane fields. The males are monitored using a VHF transmitter attached to their back, which tracks their position in real time and records their movements throughout the day. Females are not monitored with the device as its back-mounted position would prevent mating.

A week after the birds’ release, the Environmental Police found one of the males dead when patrolling the region. Biologist Thiago Dias, who has moved into a specially built hut built within the reserve where he can closely monitor the curassows as part of his doctoral research at the Federal University of São Carlos (UFSCar), lamented the bird’s death, but was reassured by the knowledge that, given the circumstances in which the death occurred, it is unlikely that the animal had been killed by poachers, who were responsible for the species’ previous extinction. “The bird apparently died of natural causes,” explains Dias. “The injuries the bird sustained indicated it had been caught by a predator, likely a wild dog.” One of the biologist’s tasks is to periodically hike into the forest with a receiver to collect position data from the bird transmitters.

“Losses are a fact of life when reintroducing specimens into nature,” says Luís Fábio Silveira, who curates the Ornithology Section of the Museum of Zoology at the University of São Paulo (MZ-USP), and is a member of the research team responsible for resurrecting the curassow, first in captivity and now in the wild. “If there are further deaths from natural causes, we can accelerate the release of new specimens in Alagoas.” A total of 15 curassow couples are initially planned to be released by 2021. There are about one hundred pure specimens of the species at Crax Brasil – Sociedade de Pesquisa da Fauna Silvestre, a breeding site in Contagem, Greater Belo Horizonte, where the birds reintroduced in Alagoas were bred.

Three young, captive-bred individuals were taken to a private reserve

Before releasing the curassows, the researchers set up a robust scientific protocol for the reintroduction process. The first step was to select a suitable location as a new home for the young animals. A private Atlantic Forest reserve owned by a sugar mill in Rio Largo—its well-preserved forest remnants providing an abundance of food sources for the birds—was selected. The researchers estimate the area has capacity to accommodate up to 20 curassow couples. On average, a pair of curassows—which measure almost 90 centimeters in length and weigh 3 kilograms—occupies around 50 hectares of forest. In 2017, one of the curassow couples was taken to this area and kept at a nursery to test the region’s viability. This helped the team to decide the best timing for the release. Because the mating season in this species is between June and August, biologists chose to release the birds into the wild in September. This would allow the animals almost a year to adapt to the reserve before entering the mating period. The last step was selecting specimens to be transferred to the reserve.

Age and genetics were the decisive factors in the choice of the three captive-bred couples that would be released in Rio Largo. Because they are descended from a population of just three individuals, all extant curassows are to some degree related. For this reason, the researchers tried to select animals with mutually different, but not rare, genetic profiles. If an individual were unable to adapt to the region or died (as in fact occurred), no genetic lineage would be lost forever. “It was important to select individuals that were young, were genetically different from each other to the extent possible, had spent little time in captivity, and exhibited good reproductive potential,” notes biologist Mercival Roberto Francisco from UFSCar’s Sorocaba campus, who is heading the genetic leg of the study. “None of the birds we reintroduced are siblings of each other.” This would, in theory, increase the chances of successful reintroduction in the wild and, above all, of their survival in the reserve. Curassows of the rarest genetic linages would only be released into the reserve when their adaptation to the natural environment was likely to be successful.

In the early stages of the reintroduction process, it is one of Thiago Dias’s tasks to place water and food—including bird feed and fruit—in an area close to the reserve nursery every two days. If any curassow is having trouble finding food in the forest, it will not be at risk of starvation. “I have to be careful not to come into close contact with the animals,” says Dias. “They must fear humans, not bond with them.” If everything goes as planned, the researchers will know whether the curassows brought into the reserve have produced offspring in the second half of 2020. In the coming months other birds, such as solitary tinamous, parrots, and guans, will also be released in the reserve area to improve local biodiversity.