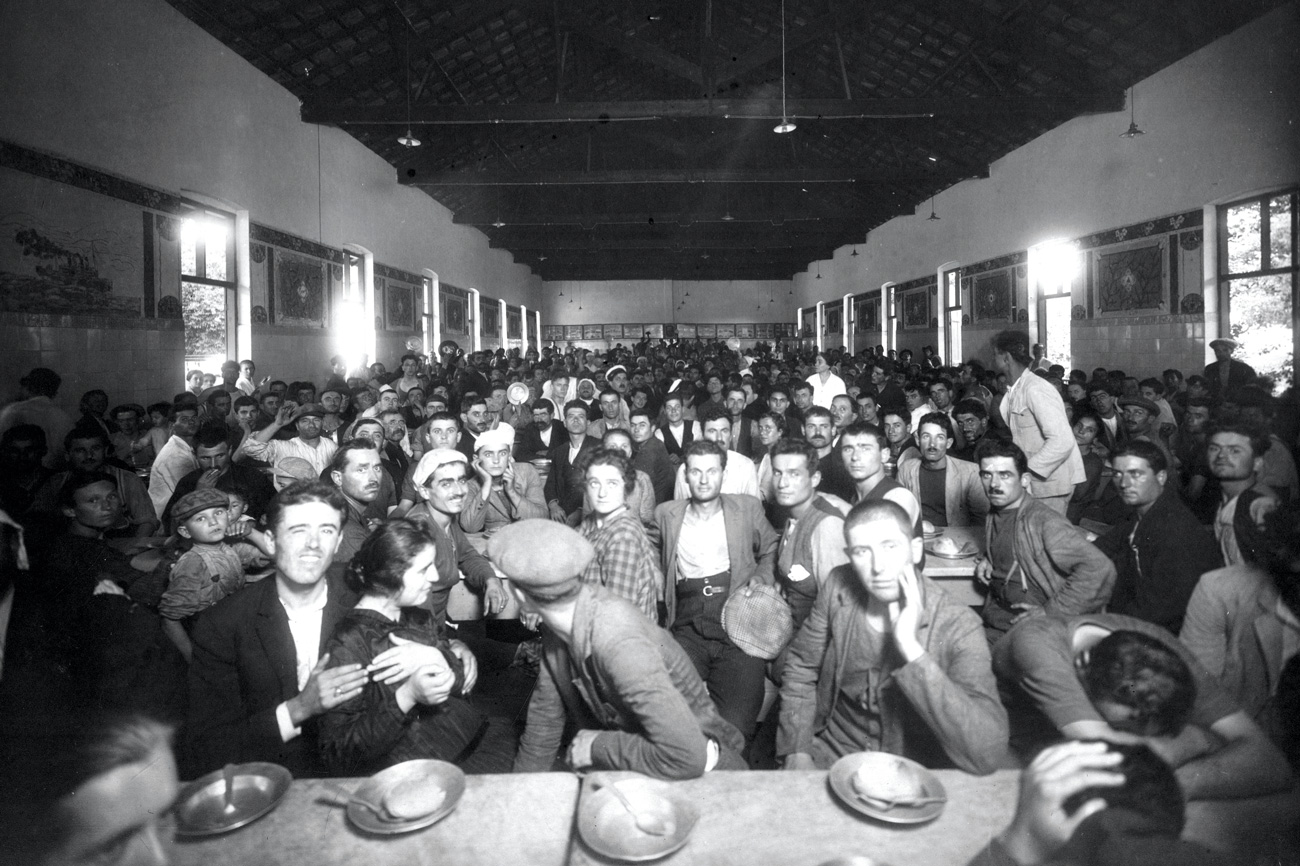 A cafeteria at the Ilha das Flores immigrant reception center, in Rio de Janeiro: a priority site for vaccination

On the morning of April 14, 1883, Domingos José Freire (1843–1899), a physician from the Rio de Janeiro School of Medicine, took a radical step in his quest to create a vaccine against yellow fever, a disease that had become prevalent at the seat of the Court since the first outbreak in 1849. Inspired by French chemist Louis Pasteur’s (1822–1895) successful development of vaccines against fowl cholera and sheep anthrax, Freire and three medical students entered a morgue in Niterói, dissected the corpse of a seaman who had died of yellow fever less than an hour earlier, withdrew blood from his heart and fragments from his organs and tissues, and carried them to the medical school’s organic chemistry laboratory.

They examined samples of the seaman’s blood under a microscope and saw what they assumed to be the yellow fever microbe—a bacterium Freire had already identified and named Cryptococcus xanthogenicus. They then injected blood from the corpse into a rabbit, which had seizures and died within 15 minutes. Blood taken from the rabbit, in which they identified Cryptococcus, was then injected into a guinea pig, which also died, indicating the yellow fever germ was transmissible. Years later, in 1928, a virus would be identified as the true cause of the disease.

Illustration of a glass flask used to produce the vaccine, published in a book in 1885Doctrine Microbienne

A month earlier, the Minister of Empire Affairs, Pedro Leão Veloso (1828–1902), had promised Freire an “answerable reward” if he succeeded in his work. In April the doctor began reporting on his experiments in the Gazeta de Notícias, in which he also responded to doctors and columnists who challenged or ridiculed his work.

“Science was not yet confined to scientific journals and the academic domain,” says historian of science Jaime Larry Benchimol, a researcher at Oswaldo Cruz Foundation’s Casa de Oswaldo Cruz (COC-FIOCRUZ), who described the morgue scene in his book O desenvolvimento da vacina contra a febre amarela (The development of a yellow fever vaccine; Editora Fiocruz, 1999) and has written several other articles about Freire. “Scientific debate was a public matter, and rhetoric an indissoluble part of doing science at that time.”

Freire gained prestige and was invited to Paris and Washington, D.C., to speak about his workAlbum, Year 1, No. 22. 1893

A few months later, in August 1883, Freire presented to the new Minister of the Empire, Francisco Antunes Maciel (1844–1917), the results of his experiments with attenuated cultures of his yellow fever microbe. Maciel appointed a commission from the Central Board of Public Hygiene to scrutinize the work done at the school of medicine. Clashes with the minister over problems that had occurred in a smallpox vaccination operation in Bahia led the committee to resign, and in October Freire was appointed chairman of the Board.

The physician had already begun inoculating volunteers with his vaccine, under protest from the now defunct committee. He claimed he had received authorization from the government, although, as recounted in Benchimol’s book, the then chairman of the Imperial Academy of Medicine, Nuno de Andrade (1858–1915), remarked at the time that “Dr. Freire’s authorization to inoculate volunteers was given by Dr. Freire himself.” By November 1, 48 people had been vaccinated, mostly Spanish and Italian immigrants newly arriving in Rio. In November the Ministry of the Empire authorized the publication of advertisements inviting immigrants and natives to submit to vaccination at Instituto Vacínico, where the smallpox vaccine was being administered. Around 13,000 people are believed to have been injected with Freire’s vaccine between 1883 and 1889 in the then federal capital and across the states of Rio, São Paulo, and Minas Gerais.

“To demonstrate that his vaccine was effective, Freire produced annual reports—albeit using very shoddy statistical methods—showing the number of people he had vaccinated and the lives he had purportedly saved,” says Benchimol. As part of his argument, in 1885 the physician published a 451-page book, Doctrine microbienne de la fièvre jaune et ses inoculations préventives, with photos of the yellow fever agent and descriptions of his method and of vaccinated individuals. The prominence and prestige he had gained from his achievements was such that he was invited to speak about his work in Paris and Washington, D.C.

“There were then a number of competing theories, including miasma theory [that diseases result from the foul odors of decaying organic matter and still water], the proposed solution to which was urban reform in Rio,” Benchimol says. “Yellow fever was highly problematic, with the same 40% mortality rate as today.” The battle for priority in the discovery of the disease-causing agent raged on until in 1928 the yellow fever microbe was determined to be a virus that had been isolated from naturally infected monkeys in West Africa. In 1883 a physiologist from the National Museum, João Batista Lacerda (1846–1915), presented to the Imperial Academy of Medicine what he claimed to be the true cause of yellow fever: Fungus febris flavae, which accumulated in the liver and caused severe jaundice. Lacerda lost credibility after a French bacteriologist examined his material and determined it was a bacterium, not a fungus. Two other yellow fever agents were described in an edition of Annales de l’Institut Pasteur in 1897: the first was a bacterium thought to dwell in patients’ digestive tract, which had been identified by a physician in Rio, Wolf Havelburg; the second was Bacillus icteroides, identified by Italian bacteriologist Giuseppe Sanarelli (1864–1940), director of the Institute of Experimental Hygiene at the University of Montevideo, Uruguay.

New discoveries
In 1887, the American bacteriologist George Sternberg (1838–1915) criticized the inconsistent working methods and the vaccines created by physician Manuel Carmona y Valle (1831–1902) in Mexico, and by Freire in Brazil, after visiting their laboratories on commission by the United States Government. “Sternberg was convinced that the failure of his own attempts to isolate the ‘yellow fever germ’ was sufficient proof that others’ success could only be illusory. He asserted that Freire’s and Carmona y Valle’s methods had no scientific value,” wrote historian of science Ilana Löwy, a researcher at the Center for Research in Medicine, Science, Health, and Society (CERMES) in Paris, in her book Vírus, mosquitos e modernidade: A febre amarela no Brasil entre ciência e política (Viruses, mosquitoes and modernity: Yellow fever in Brazil between science and politics; Editora Fiocruz, 2006).

“Fresh discoveries and new scientific procedures ultimately invalidated Freire’s and others’ work in the late nineteenth century,” says historian of science Marta de Almeida, a researcher at the Museum of Astronomy and Related Sciences (MAST). In 1881, at a scientific conference in Washington, D.C., the Cuban physician Carlos Finlay (1833–1915) presented his theory that the agent of yellow fever was transmitted by the mosquito Stegomyia fasciata, which would later be renamed Aedes aegypti. “Finlay also assumed that the yellow fever agent was a bacterium, Micrococcus tegraenus, which helps explain why his theory took long to be accepted,” says Benchimol. It was only in 1900 that the United States Army, which had also been searching for a bacterium as the cause of yellow fever, tested Finlay’s mosquito-vector hypothesis by implementing mosquito control in Cuba, and within six months the disease that had plagued US soldiers had vanished. Physician Emílio Ribas (1862–1925), director of the Sanitary Service of the State of São Paulo, confirmed ​​Finlay’s transmission theory in 1898 when he acquired a mild form of the disease after letting himself be bitten by infected insects (see Pesquisa FAPESP, issue no. 157). In Rio, physician Oswaldo Cruz (1872–1917) led programs to eradicate the mosquito vector. “At first doctors shunned the idea that yellow fever was transmitted by mosquitoes, which were seen as a nuisance, but a perfectly harmless one,” says Almeida.

In 1936, South American physician Max Theiler (1899–1972) completed the development of a vaccine against yellow fever at the International Health Division (IHD) of the Rockefeller Foundation, in New York, with an attenuated version of the virus then recognized as the agent of the disease. The foundation funded the first field trials in Brazil the following year and, after achieving positive results, supported large-scale production of the vaccine shortly after at the Immunobiological Technology Institute (Bio-Manguinhos), in Rio de Janeiro, with a variety of the original virus and using a production method virtually unchanged since.