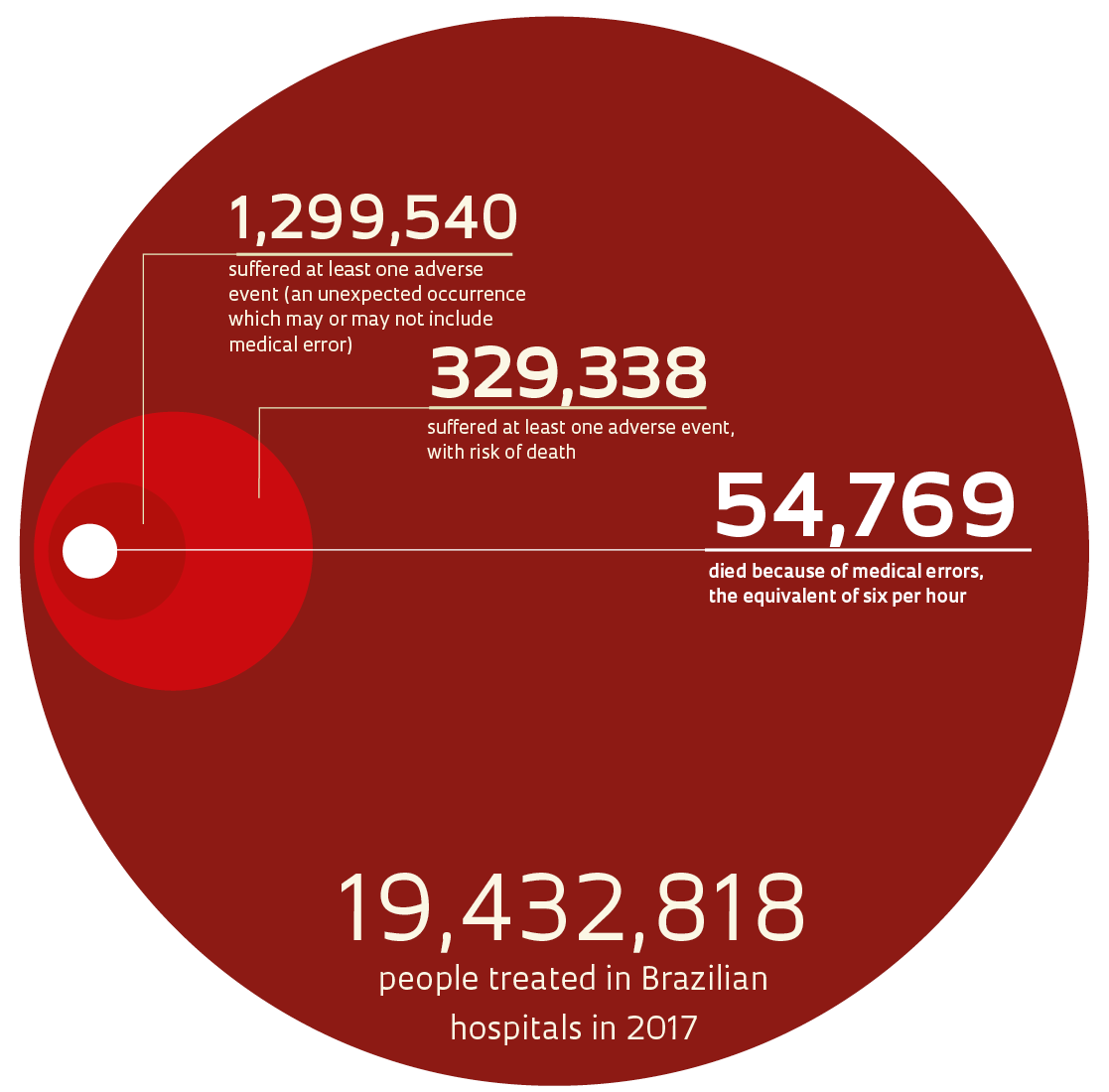 Of the 19.4 million people treated in Brazilian hospitals each year, 1.3 million suffer at least one side effect caused by negligence or carelessness during their medical treatment. It could mean a patient’s left knee is operated on instead of his right, or a patient is given an analgesic that causes a severe allergic reaction, even after notifying staff of her drug sensitivity, among other possible scenarios. The consequences can be fatal: almost 55,000 people die each year in Brazil, the equivalent of six per hour, due to medical errors. The data come from a survey by the Institute of Supplementary Health Studies of the Federal University of Minas Gerais (IESS-UFMG). Taken from medical records from 182 hospitals across the country, from April 2017 to March 2018, they served as the basis for extrapolating conditions to the approximately 6,000 hospitals throughout Brazil. Through studies like this one, published in 2018, an undesired and little-researched topic like medical error is brought into focus, stimulating improvement programs at public and private institutions.

Reducing injury and death from preventable errors during medical treatment is a worldwide challenge. The World Health Organization (WHO) debated this issue for the first time in 2002 at its general assembly, and estimates that this problem causes the deaths of 2.6 million people each year, or five every minute. According to WHO documents and studies by researchers, healthcare failures result from excessive hours of work, poor training of health professionals, noncompliance with safety procedures, and inefficient communication on two levels: among the medical team itself and between the team and their patients. Many deaths and injuries could be avoided by paying more attention to workplace regulations, such as correctly identifying patients to avoid medication errors, and adjusting routine procedures, such as changing the label on a drug to avoid confusion with a similar medication.

A team of British researchers coordinated by psychologist Maria Panagioti, from the University of Manchester, England, reviewed 70 articles from groups in Europe, and from the United States and other countries that had evaluated the treatment outcomes from a total of 337,025 patients. They concluded that one in every twenty people treated at hospitals suffer some type of preventable harm, as detailed in a July 2019 article in the British Medical Journal (BMJ). In the United States, this topic began to be openly debated in 1999, with the publication of the book To Err Is Human: Building a Safer Health System, from the National Academy of Medicine, a US NGO (formerly known as the Institute of Medicine). Responsible for 210,000 to 400,000 deaths per year, medical error represents the third-leading cause of death among Americans, after cardiovascular disease and cancer.

“In the United States, the problem hasn’t been solved, but medical teams are obligated by law to communicate procedures and possible errors to patients,” notes psychologist Vitor Mendonça, a researcher at the University of São Paulo School of Medicine (FM-USP). In 2016 and 2017, as part of his postdoctoral fellowship at the University of Washington, in Seattle, United States, Mendonça trained medical residents in clinical practice, discussing how to react if they made mistakes. He suggested they apologize to the patient several times, show empathy, and offer help, in accordance with a methodology proposed by his supervisor, Thomas Gallagher.

In a September 2019 article in the journal HEC Forum, Mendonça, Gallagher, and Reinaldo Oliveira, from FM-USP, observed that in Brazil this issue is rarely discussed during physician training, and doctors don’t usually receive psychological support to overcome the distress that may follow an unexpected outcome. “The biggest mistake lies in not identifying the causes of unforeseen events, correcting them quickly, and improving work procedures, continuously—as is done in aviation,” says doctor Renato Couto, professor at the School of Medical Sciences of Minas Gerais and coordinator of the IESS study.

“In Brazil, the tendency is still to hide the error, instead of understanding it as part of the work process,” observes doctor and lawyer Isabel Braga, a researcher at the Oswaldo Cruz Foundation (FIOCRUZ) in Rio de Janeiro. In one of her studies, published by São Paulo’s Einstein Hospital in its April 2018 issue of Einstein journal, she analyzed decisions from 34 medical malpractice lawsuits in the state of São Paulo from January 2011 to December 2016, and found doctors were convicted in 73% of lower court rulings. The specialties most prone to errors were: emergency services clinics, with ten cases; obstetrics, with eight; surgeries, with seven (five from general surgery, one plastic surgery, and one urological surgery).

Braga observed that harm resulting from childbirth was the main single cause for legal complaints (17.6%). Other cases in her survey were motivated by undiagnosed meningitis (two cases), a leptospirosis case misidentified as dengue, an iliac vein that was perforated during hip surgery, a severe allergic reaction after medication with penicillin, a laryngectomy based on a false finding of malignancy, and one case of administering the wrong snake antivenom.

Her study indicated that lawsuits filed by patients tend to be driven by procedures that resulted in errors that could be identified quickly. “Procedures with long-term consequences, without a clear scientific basis, such as dermatological or hormonal treatments, rarely result in lawsuits by the alleged victims, because the supposed effects of the errors can rarely be proven,” she says.

Studies carried out in other states paint a similar picture. Daniel Carlos Neto, a Brazilian lawyer and doctor who holds a doctorate in public health from the University of Business and Social Sciences in Buenos Aires, Argentina, found that negligence was the main cause (58.6%) for medical errors in the 58 cases tried in Rondônia State from January 2015 to April 2018. In a May 2019 article in Revista Eletrônica Acervo Saúde (Online health archive journal) in which he presented his results, the researcher defined negligence as “inaction, indolence, inertia, or passivity.” Another cause of medical error is culpable ignorance, where a health professional should have stayed current on a certain topic or consensual procedure for treating disease, and failed to do so.

Medical professionals who commit some type of medical error can be sued in three legal arenas. The first is civil court, through which the patient and family members can request financial damages from health professionals, institutions, or the state, as a way of seeking compensation for the alleged errors, after proving their case. The second is criminal court, for errors that caused harm to the patient’s physical integrity, such as bodily injury, manslaughter, or negligence. The third is administrative, through professional organizations such as the regional or federal medical councils, which are restricted to judging infractions against the Code of Medical Ethics, which has penalties that range from warnings to losing the right to practice medicine. The São Paulo State Regional Medical Council (CREMESP) launched 702 professional ethics investigations prompted by medical errors over the last three years. During this period, 463 doctors were found guilty. The majority received confidential warnings, while 13 were given penalties that revoked their right to practice professionally (see graphic).

“For doctors, being evaluated by one’s peers, in the councils, has more weight than in court,” concluded Mendonça. During his postdoctoral studies, he interviewed 20 physicians in the city of São Paulo: half had never been prosecuted, and the other half had been, or were being, prosecuted. Those in the first group reported being afraid of conflict situations caused by their mistakes, or appeared indifferent, claiming that mistakes could indeed happen. Those in the second group rarely sought help from colleagues or other professionals to talk about their situation, and .

In 2015, while still finishing his doctorate, which he completed at USP’s Institute of Psychology, Mendonça had interviewed 12 people who had been victims of medical errors. “More than the financial damages, the victims wanted an apology from the doctors, and that the punishment would make them think about their clinical practices so the error wouldn’t be repeated,” he noted.

In other attempts to confront medical errors, institutions act to improve medical teams’ procedures, reinforcing what are known as good clinical practices, and obtaining endorsements from national and international certifying agencies. In 2017, a team from Belo Horizonte’s Municipal Health Department (SMS) began to evaluate patient safety in the seven largest public hospitals in the city. One of the hospitals received a rating of 85% for quality of care, while another was at 24%. In medical centers with the lowest ratings, patient identification using barcode bracelets wasn’t always done correctly, or used to track medications and medical procedures. Likewise, the surgical checklist—verifying documentation, patient identity, fasting status, location or limb to be operated on, blood reserves, and materials to be used—was below expectations.

Through an SMS program, the hospitals planned what to do to comply with legislation and improve patient safety. In November 2019, pediatrician Valéria Fonseca, a consultant for the SMS health innovation group, visited the hospitals again and noted advances: “Even hospitals with low prior performance have made big strides in implementing safety measures.” In June 2020, the hospital that has shown the best results will receive a prize of R$1 million.

As a result of the death of a 27-year-old woman in 2015 due to medical errors, the safety program at Hospital Israelita Albert Einstein—a private institution in São Paulo—was restructured. It now includes performance targets and monthly meetings where the nearly 300 doctors can discuss treatment failures, and special telephone lines through which patients can ask other doctors redo the diagnosis or reevaluate the risks of hemorrhage. “Serious adverse events caused by hemorrhages have dropped from five or six per year to zero,” says Miguel Cendoroglo Neto, the hospital’s managing director. “Despite these improvements, until we reach zero adverse events or hospital infections, we will not rest.”

Improving the quality of care—and consequently avoiding errors—means avoiding the concentration of power, which is usually in the hands of doctors. “One of the biggest problems in improving patient safety is hierarchical distance, which promotes communication failures and increases the risk of errors,” observes intensive care physician José Mauro Vieira Junior, who became director in December 2018 of the then recently created Institute of Safety and Quality at Syrian-Lebanese Hospital (HSL), in São Paulo. To let some fresh air into the hospital routine he has declared that “anyone on the team has the autonomy to stop a procedure if they suspect an error or identify a risk to the patient.”

From 2002 to 2018 reports of conditions with high risk for errors—and actual reported errors—at HSL had risen from less than 1,000 to around 16,000. “We’re all more attentive about reporting risks of errors, failures, and opportunities to improve work procedures,” states Vieira Junior. As a result, he says there has been a 70% drop in catastrophic adverse events, which cause permanent harm. Such was the case with one of Vitor Mendonça’s doctoral research interviewees. The patient left the hospital (which was not identified in the thesis) a quadriplegic because anesthesia had been applied to the wrong vertebra prior to surgery to repair testicular veins.