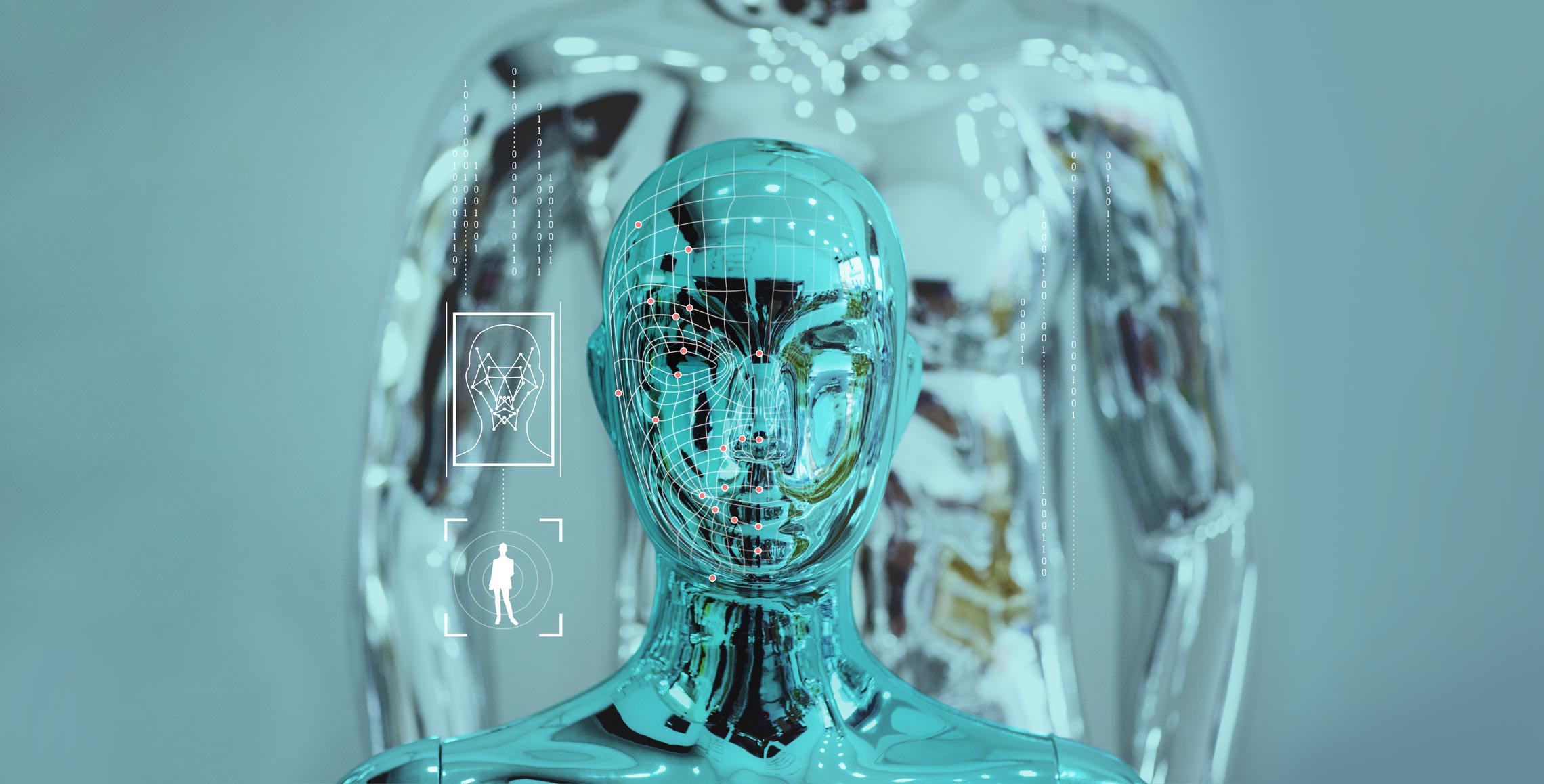 Photo by Léo Ramos Chaves and Illustration by Fabio Otubo

Gone are the days when typing in a password or touching a fingerprint reader was the only way to unlock and access a smartphone. The latest models now come with facial recognition systems. This biometric technology, which is also used in access control, airline check-ins, criminal investigations, and commercial transactions, is rapidly growing in popularity as businesses from various industries become more aware of its range of potential applications. The global facial biometrics market is expected to reach US$9.8 billion in 2023, more than double that of 2017, according to US research firm Research and Markets.

“Facial biometrics are used to identify people based on the intrinsic characteristics of their face,” explains computer scientist Tiago de Freitas Pereira, a researcher at the Ecole Polytechnique Fédérale de Lausanne (EPFL) and the Idiap Research Institute, both in Switzerland. It is one of several existing biometric recognition systems. “Although humans are able to recognize facial features effortlessly, defining a set of rules that enable a computer system to do so automatically and reliably is not an easy task,” notes electrical engineer José Mario De Martino, a professor at the School of Electrical Engineering and Computing at the University of Campinas (UNICAMP) and coordinator of the university’s Galileo Scientific Visualization Laboratory.

The first step in creating such a system is to develop an algorithm capable of identifying the discriminant characteristics of the face—called nodal points—such as the distance between the eyes, the width of the nose, the size of the chin, and the jawline. Next, a method is needed to map these points onto an image, and another to classify and compare them. “Using a static image or video captured by a camera, the system identifies the face and maps its nodal points,” says electrical engineer Olga Regina Bellon, a professor at the Informatics Department of the Federal University of Paraná (UFPR). A mathematical representation of the facial features is then generated and a biometric code, like a kind of unique facial signature, is generated and stored in a database, explains the researcher, who also manages the Imago Group for Research in Computer Vision, Computer Graphics, and Image Processing at UFPR. In the future, whenever a person is scanned by a facial recognition system, a numerical sequence that corresponds to their face will be generated and compared against the stored codes. 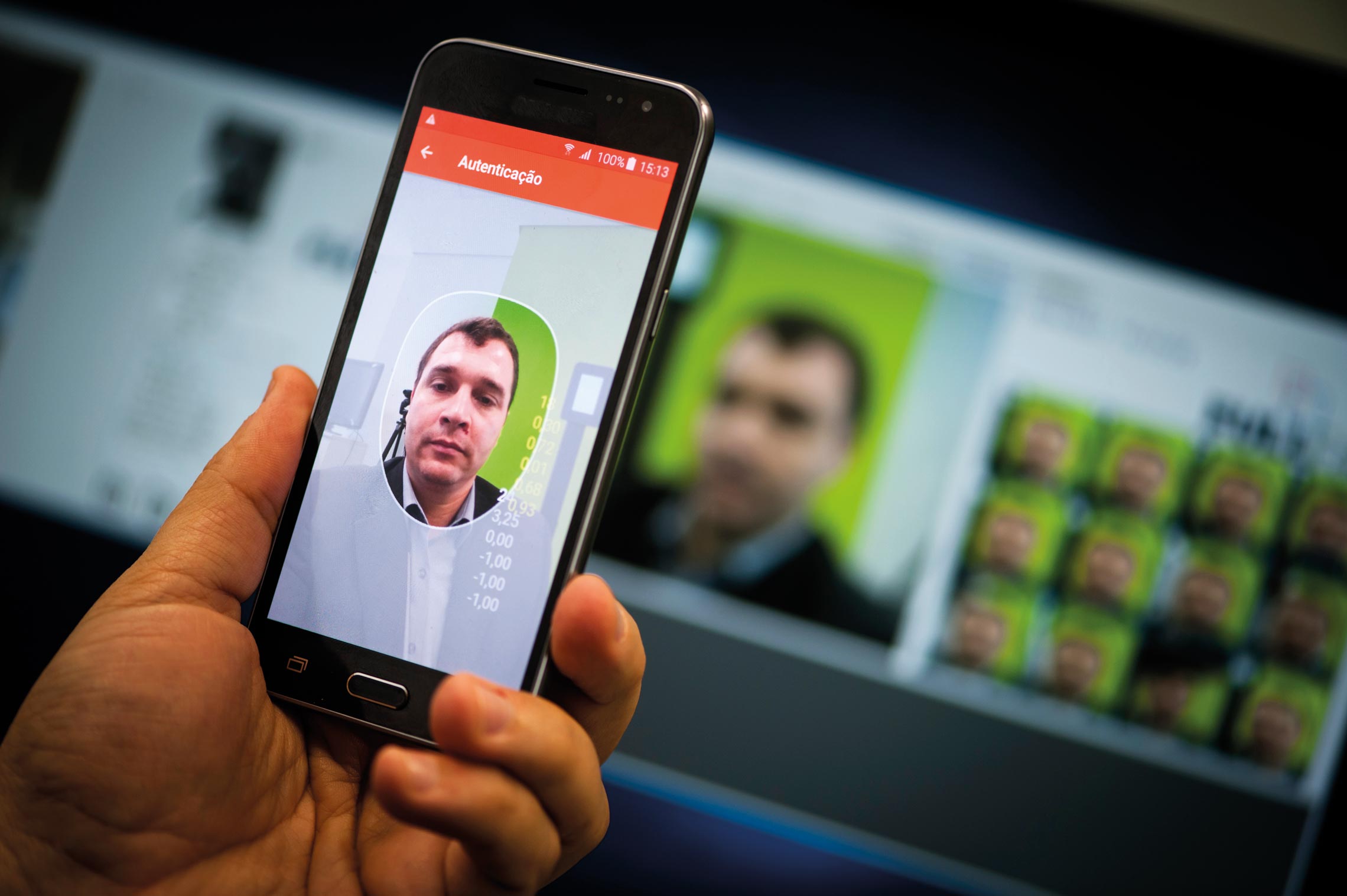 Identifying university entrance exam candidates
The use of this technology has grown worldwide, including in Brazil. Fuvest, the company responsible for entrance exams at a number of universities, including USP, will use facial recognition in the 2019 exam process to increase security and expedite candidate identification. The idea is for the system to replace the current paper fingerprint system and to be used together with a requirement for an official ID and signature. Recognition will be based on photos that the candidates will submit when registering for the exam, which Fuvest stores in a database. On the day of the exam, the system will compare the faces of participants with the stored data.

The Brazilian Credit Protection Service (SPC) has also adopted the technology to make commercial transactions more secure and to prevent fraud. In July, it launched the SPC Facial Recognition system, which helps vendors confirm the identity of consumers and ensures veracity in credit processes. A webcam installed at the vendor’s premises takes images of the client’s face and sends the data to the SPC facial recognition system, which compares it to information previously stored in its database. The goal is for the system to be fed collectively by vendors and institutions linked to the SPC, as well as to add to other credit validation tools. Three million faces are expected to be registered in the first year that the system is operational.

There are two types of facial recognition technology available on the market: two-dimensional and three-dimensional. Most of the systems used in Brazil are based on 2D recognition, where the identification process and measurement of nodal points only consider the height and width of the face. “Two-dimensional systems map the variable distance between these common points,” says computer engineer Luciano Silva, a professor at UFPR’s Exact Sciences Department.

The system requires cooperation from the individual, who needs to look directly at the camera for it to properly capture the image, map the points, generate a biometric code, and perform a comparison. Such systems can be up to 99% accurate. “One problem is that two-dimensional facial biometrics can be affected by the lighting of the environment where the image is taken,” says Olga Bellon, from UFPR. “Any distortion, such as shadows or variations in the position of the face, could compromise the process,” the researcher adds.

Two-dimensional facial recognition can also be easily deceived by something known as a spoofing attack, where the sensor is presented with false biometric data such as a mask or a photo. At the end of last year, a Vietnamese company managed to fool the facial recognition system of Apple’s iPhone X by wearing a mask that replicated the features of the real user.

Three-dimensional systems, however, are more sophisticated. “In addition to mapping the face in two dimensions [height and width], they also capture data related to the depth of the facial features. This type of analysis can give a more accurate picture of the entire facial geometry,” explains Martino, from UNICAMP.

Japanese company NEC is one of the world’s leading suppliers of information technology services. Its 3D facial biometrics system Neoface is used by the Brazilian Federal Revenue Service to identify passengers on international flights at 14 Brazilian airports. Implemented in 2016, the technology has helped police identify wanted criminals and suspected smugglers and drug traffickers.

Images at an angle
Computer scientist Rafael Vida, biometric solutions manager for NEC in Brazil, explains that Neoface maps specific points of the face around the eyes, cheeks, and mouth. “One advantage of 3D modeling is that it allows you to capture the face from different angles, in real time, without the subject having to stand still and look at the camera,” he points out. The system converts the facial data into a code that once stored, can only be accessed using an algorithm developed by the company itself. “We do not use the image of the face itself to identify the person,” says Vida. “Recognition is achieved by comparing the biometric codes, a process that takes less than a second.”

In Brazil, São Paulo–based startup FullFace Biometric Solutions has developed an algorithm capable of analyzing up to 1,024 points on the face and generating a unique code for each individual in less than 0.05 seconds, without any need to store photos of faces. “Unlike traditional solutions, our 3D recognition technology is not based on cartilage points such as the tip of the nose or the outlines of the ears, but on bone structure,” explains civil engineer Danny Kabiljo, commercial director of FullFace. “This enables the system to recognize faces that have aged, and even to differentiate between identical twins with subtle variations in facial geometry.”

According to FullFace, its technology recognizes and memorizes features associated with each individual’s face every time it is captured from different angles or in different lighting. The system was built using convolutional neural networks (CNNs), a set of computational techniques inspired by the neural structures of intelligent organisms capable of gaining knowledge through experience.

“Today, the most promising approaches to facial recognition involve the use of deep convolutional networks designed to automatically extract and compare the most relevant facial features by analyzing extensive sets of reference images,” says Martino.

According to Kabiljo, the FullFace system is up to 99% accurate and can identify a person even if they are wearing glasses, have facial hair, are wearing makeup, or have undergone plastic surgery. The company has 36 clients, including Serasa Experian, Itaú, and Brazilian airline Gol, who adopted the technology last year for checking in passengers. With the new system, passengers can check in simply by installing the airline’s mobile application and taking a photo of their face.

FullFace is continually striving to improve its technology, to increase accuracy and reduce the time taken to perform the analysis. Kabiljo explains that in general, companies and researchers around the world are working to enable the technology to recognize faces in low-light environments and to determine the age and gender of the person being analyzed.