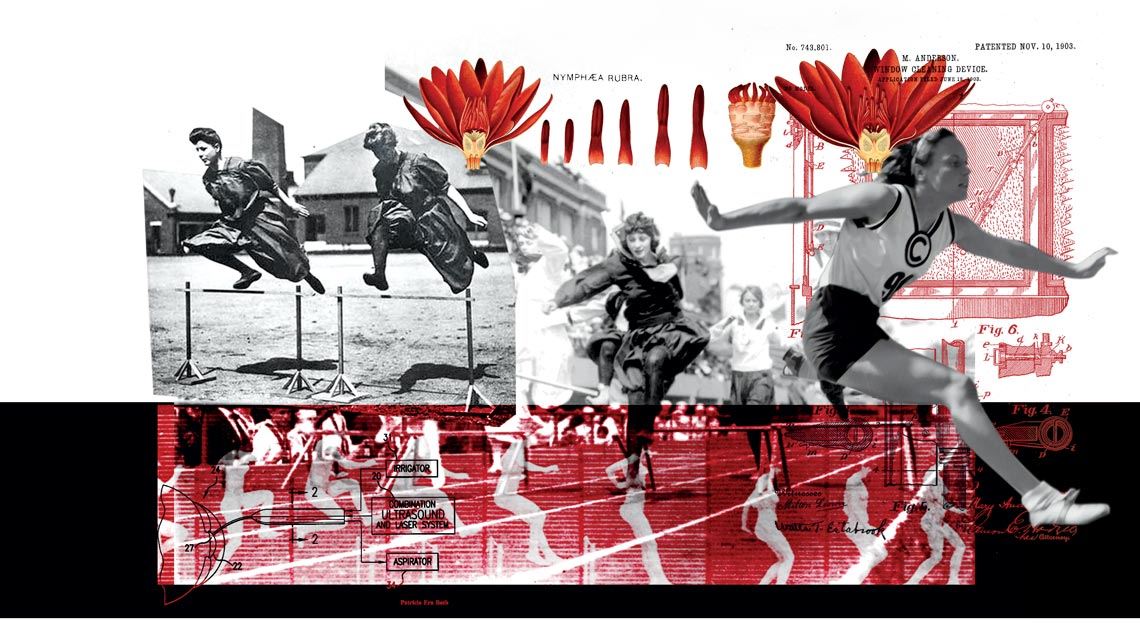 Women have made important inroads in science careers over the years, gaining ground in virtually all fields and in academic publishing. But when it comes to producing science with commercial applications, women’s participation is far outweighed by men’s. In Latin America, only 22% of patents have women as listed inventors, although this percentage has been steadily growing (see graph).

These were the findings in a recent paper in Scientometrics that correlated patenting with gender in 11 Latin American countries. The study, published in August by Venezuelan economists working in Mexico and Venezuela, compiled 3,081 patents granted by the United States Patent and Trademark Office (USPTO) from 1976 to 2011, and identified the technological field of the inventions and the gender of the inventors. Panama and Peru had the lowest ratio of women assignees, respectively 7% and 6%. At the other extreme, 84% of patents granted in Cuba had at least one woman inventor listed—patents can be filed individually or by groups of inventors. Brazil ranked first for total patents granted—accounting for 40.3% of the sample—but performed poorly in women’s inclusion. Of Brazil’s 1,243 patents, only 229 or 18.4% of the total had women inventors listed.

The gender gap in innovation research is well documented. A 2019 survey by the UK’s Intellectual Property Office (IPO), for example, found that women account for less than 13% of patent applications globally. The paper in Scientometrics goes a step further and provides insight into factors that facilitate or undermine women’s patenting success in Latin America. The paper found, for example, that women are more likely to appear as inventors in patents filed by teams than those filed by individual inventors. “In our sample, women were 22% more likely to hold patents granted to teams of inventors,” says Domingo Sifontes, a professor at the School of Economic and Social Sciences at the University of Carabobo, in Venezuela, who coauthored the paper. “From a public-policy perspective, this suggests that one way to boost female participation in patenting would be to encourage teamwork in both industry and in academia, but this is something that needs further investigation.”

Female names will also be more readily found in patents granted to public institutions than to corporations. In Brazil, 68.5% of patents granted to universities had at least one female inventor, compared to 15.6% of patents granted to corporations. Universities have developed policies, explains Sifontes, to encourage their researchers—both men and women—to patent. “And, in addition to offering a favorable institutional environment, they provide faculty with the conditions to engage in research that can potentially lead to patentable intellectual property,” he says. Meanwhile, the few Latin American companies with in-house research and development (R&D) teams have more rigid structures, “creating limited opportunities for women to advance in their careers,” says the economist. The study also identified the fields of knowledge in which women’s participation in patenting is greatest. Sifontes found that women are more likely to patent in life sciences, a field in which—not coincidentally—women are also well represented in science careers.

The paper reveals a myriad of obstacles that women face in expanding their participation in innovation-centric research. Some researchers note, among other factors, that women have traditionally engaged little in this type of research and may lack experience in patenting procedures. Hence the importance of being part of a team that can serve as a supporting network for the patenting process. Behavioral components could also be at play. Women who engage in research alone appear to be more cautious in using the support systems of their companies or universities to assist them in patenting; they do so only when certain about the quality and potential of their invention. Men, on the other hand, are more familiar with the process and tend to take more risks, even before the product they intend to patent has been proven to be viable.

A 2016 paper in Research Policy showed that gender inequality may affect women’s patenting involvement, but not their productivity—when they do engage in patenting, they are as productive, or more so, than men. The study, authored by innovation policy expert Yu Meng at Nanyang Technological University, in Singapore, analyzed the database of a major US study on women’s access to scientific careers. One of the obstacles she observed was the limited networks most women had in both a university and a corporate setting; men, in contrast, tend to be more experienced in collaboration. The study suggests that collaborative networking significantly increases the likelihood of researchers being involved in patenting.

The organization of work at universities can also explain why women have greater patenting success at these institutions than in industry. “The burden of homemaking tends to be shouldered more by women than by men, affecting women’s work routines at both companies and universities. The difference is that universities are more flexible than corporations are in this respect,” explains Camila Rigolin, a researcher on gender relations in science at the Federal University of São Carlos (UFSCar). Higher education institutions also provide greater opportunities to share tasks among members of a research group. “This would also help to explain women’s greater involvement in patenting activity when they work in teams.”

The most difficult obstacle to remove is also the one most deeply entrenched: the underrepresentation of women in science, technology, engineering, and mathematics (STEM) disciplines and occupations—precisely those in which patenting activity is typically the most promising and profitable. How can women be expected to patent more in these fields if they are dominated by men?

Some of the fastest-growing industries and occupations are in STEM fields, but only 35% of students in these fields in Latin America are women, according to data compiled by the United Nations (UN). In disciplines such as artificial intelligence and machine learning, they make up only 22% and 12% of the workforce, respectively.

Researchers in Brazil and Spain observed a similar trend when they analyzed patents filed between 2007 and 2016 in the European Patent Office’s (EPO) Worldwide Patent Statistical Database (PATSTAT). They selected those in which at least one of the applicants resided in one of the 23 Ibero-American countries. Out of a total of 150,863 applications, the gender of applicants could be identified in 103,914. Similarly to the study in Scientometrics, they found that women’s involvement is limited in patents granted to groups working in industry (27%), but increases to 40% for groups working at universities.

One of their most well-documented findings shows that female participation in patenting is especially low in STEM fields, and is largely concentrated in careers in which women have gained ground in the recent past, such as pharmaceutical sciences and biotechnology (see graph). “At the current rate of growth in female inventorship, it will take decades for countries to achieve gender equity in innovation activity, especially given the adverse institutional environment,” says Kelyane Silva, a researcher at the Brazilian National Institute of Industrial Property’s (INPI) Intellectual Property Academy, who coauthored the paper reporting on these and other findings in the Journal of Data and Information Science.

Rigolin, of UFSCar, came to similar conclusions when he analyzed the gender of applicants in FAPESP’s Research for Innovation in Small Businesses (RISB, or PIPE in the Portuguese acronym) program. Of the 1,788 grants that had been awarded as of 2017, 388 (21,7%) were for projects led by women. The profiles of women engaged in entrepreneurial research within the program are consistent with their relative representation in different academic fields; few female startup founders have training in engineering or computer science—in contrast with their male counterparts—and most have backgrounds in fields that have a strong female presence, like biological sciences, chemistry, and pharmaceutical science (see Pesquisa FAPESP issue no. 289).

The underrepresentation of women in certain careers makes the research environment less diverse and limits its ability to solve problems. “Science and industry miss opportunities to create value by alienating potential inventors, a consequence of the gender gap in patenting,” laments computer scientist Danilo Silva de Carvalho, a researcher at Oswaldo Cruz Foundation’s (FIOCRUZ) Center for Technological Development in Health, who coauthored the Spanish-Brazilian article. Studies in the early 2000s found that, although proportionally fewer in number, patents filed by women were comparable and often superior in quality and impact to those filed by men.

Civil engineer Liedi Legi Bariani Bernucci, a professor at the Polytechnic School at the University of São Paulo (POLI-USP), says the gender gap in STEM fields, while already evident in elementary education, becomes even starker in higher education. “Girls start to lose interest in these fields early in their schooling, and even more in high school,” notes Bernucci, who currently serves as director at POLI-USP and is the first woman to run the engineering school in 127 years. Those who go on to pursue STEM fields in higher education are faced with a hostile environment, which often manifests itself in the form of sexual harassment, humiliation, belittling or rejection of the ideas female students present in the classroom or in laboratory meetings. “I experienced some of these issues myself as a civil engineering student at POLI-USP,” she says. The upshot is that many drop out of their programs or choose a different field, and female representation remains low as women advance in their scientific careers, even though almost half of researchers (45%) are women.

Several universities have begun to implement efforts to help women not only enter but continue in these fields. “At Cornell University, for example, 50% of engineering students are now women; at Stanford, 42%; and at MIT [Massachusetts Institute of Technology], 37%,” says Bernucci. “For these institutions it’s not just about promoting gender equity; it’s about amplifying women’s productivity, competitiveness, and capacity for innovation, and the economic advantages that come with that.”