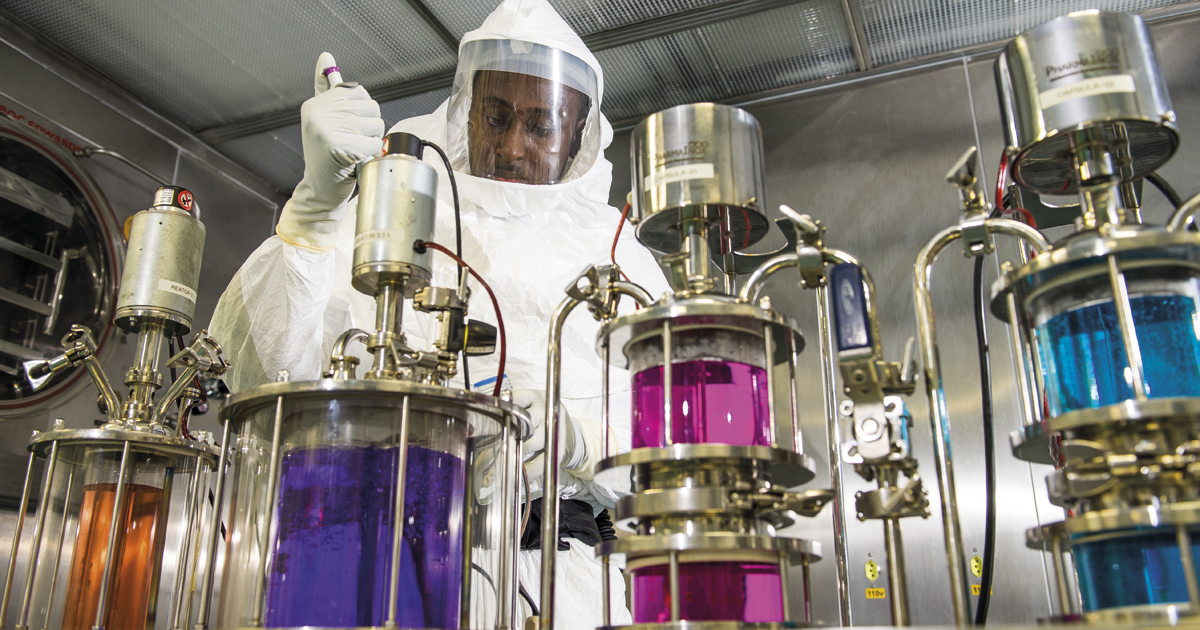 An employee at the EMS laboratory in Hortolândia

Generic drugs—copies of brand-name products for which patent protection has expired—have been the primary springboard for pharmaceutical company EMS’s growth. According to data from health care consulting firm IQVIA, the company is Brazil’s largest drugmaker by revenue in both the generic and overall pharmaceutical market (brand-name drugs and drugs sold to hospitals, clinics, and the government). “EMS became the first pharmaceutical company in the country to produce and market generic drugs in 2000, and since 2013 has been the undisputed leader in this segment,” says institutional vice president Marcus Sanchez. The company is now venturing into the market for drugs developed through radical innovation, i.e. research and development (R&D) of new active ingredients. This led in 2013 to the creation of Brace Pharma in the US, where more than 70% of the world’s new drugs are developed.

Based in Rockville, Maryland, Brace Pharma receives annual funding of US$300 million. It allocates 80% of funds to clinical-phase programs, with the potential to reach the market within five years, and 20% to preclinical candidates, which could be on the market in up to seven years. According to Marcus Sanchez, the company is focused primarily on medicines for diseases with “a high degree of unmet medical need and for which insufficient treatment options are available.” To achieve its research objectives, Brace has established 12 collaborations in fields such as oncology, virology, pulmonology, cardiology, and hematology.

One of EMS’s strategies in creating Brace was to first seek US Food and Drug Administration (FDA) approval before filing new drug applications with the Brazilian Health Regulatory Agency (ANVISA) and regulators in other Latin American countries. Brace’s first drug application should be filed later this year for a next-generation, portable inhaled nitric oxide delivery system for pulmonary and cardiac diseases—currently, the only way to provide nitric oxide for inhalation is via large, pressurized gas cylinders. The product is being developed through a collaboration with GeNO, a US–based biopharmaceutical company, i.e. a pharmaceutical company specializing in biotechnology.

Reinaldo Guimarães, a former vice president of the Brazilian Association of Fine Chemistry, Biotechnology, and Specialties Industries (ABIFINA), says investing in biotechnology is becoming a matter of survival for pharma companies. “Biotechnology is the future of the pharma industry. It is growing at a fast pace and pure chemical synthesis firms are at risk of losing chunks of market share in the next 10 years,” says the physician, who previously served as Secretary for Science, Technology, and Strategic Procurement at the Ministry of Health from 2007 to 2010.

Adriano Andricopulo, a professor at the São Carlos Institute of Physics at the University of São Paulo (USP), believes Brace has been one of the most exciting initiatives in Brazil’s pharma industry in recent years. “It will provide an opportunity to leverage US expertise to develop new compounds and technologies in the world’s most important R&D market,” says Andricopulo, who is head of technology transfer at the Center for Research and Innovation in Biodiversity and Drug Discovery (CIBFAR), one of the Research, Innovation, and Dissemination Centers (RIDC) funded by FAPESP.

Andricopulo hopes Brazilian scientists will benefit from interacting with some of the renowned drug discovery researchers on Brace’s Scientific Advisory Board: 2000 Nobel Prize winner Eric Kandel; Samuel Broder, who codeveloped some of the first AIDS drugs; Raymond Schinazi, who has developed drugs for hepatitis and AIDS; and Peter Hirth, who has experience in biotechnology as a researcher and executive at US pharmaceutical companies. “But it would also be beneficial if radical innovation projects were developed in Brazil through technology transfer between industry and universities,” says Andricopulo, who is a former president of the Brazilian Chemistry Society.

EMS has increasingly invested in the development of complex generics

Incremental innovation
Alongside its Brace Pharma investment, EMS is also placing its money on the development of highly complex generic drugs, which require new analytical methods to be developed to demonstrate their effectiveness.

Among the highly complex generic drugs in the company’s portfolio is cyclosporine microemulsion, an immunosuppressant used to prevent transplant organ rejection. According to Marcus Sanchez, EMS has been the exclusive producer of this drug in Latin America for more than 17 years, making it one of the company’s chief exports.

A gas chromatography center, where volatile compounds are separated and quantifiedEduardo Cesar

EMS has also engaged in incremental innovation in the form of more efficient formulations for existing reference medicinal products (innovative products that have been approved and are being marketed in Brazil, the effectiveness, safety, and quality of which have been scientifically demonstrated). A case in point is Patz SL, a drug launched in 2012 based on the active ingredient zolpidem, used for insomnia. The company improved on the conventional tablet dosage form by creating a version for sublingual administration that delivers the drug directly into the bloodstream, producing a faster effect with half the normal dose.

Another way of achieving incremental innovation has been by combining different active ingredients together, as the company did in the development of Esogastro IBP, a drug for Helicobacter pylori infection, which causes chronic gastritis. EMS developed a proprietary combination of esomeprazole to control gastric acidity and two antibiotics (amoxicillin and clarithromycin) in a single formulation, creating a novel drug based on well-known active ingredients.

Incremental innovation and complex generics development at the EMS R&D Center are funded with annual investment of 6% of the company’s revenue. In 2016 the company posted total revenue of R$10.7 billion. “We currently have about 50 programs at various stages of development in our pipeline, and aim to complete 12 to 15 new programs each year,” says Sanchez.

Employing around 400 people—including administrative staff, technicians, and researchers—the R&D Center is cohosted in an industrial park in Hortolândia, São Paulo, alongside the company’s headquarters. EMS also has facilities in the municipalities of São Bernardo do Campo and Jaguariúna, both in São Paulo; Manaus, Amazonas; and Brasília, Federal District. Together, the five plants employ 5,000 people and have a total capacity to produce 1 billion drug cartons per year.

EMS exports to more than 40 countries, especially in Europe. The company will soon also supply medicines to countries in Africa, Asia, Latin America, and the Pacific that are affected by yaws, a neglected tropical disease caused by the bacterium Treponema pallidum pertenue. In April 2017, EMS concluded a cooperation agreement with the World Health Organization (WHO) under which, in a single year, it will donate 40 million tablets of the antibiotic azithromycin for use in a global initiative to eradicate the disease.

Until 2012, the standard treatment for yaws—a disease that affects the skin, and, in more advanced cases, compromises bones and cartilage—had been by way of injections of benzathine penicillin. It was then discovered that a single oral dose of azithromycin completely cures the disease.

The ease with which this treatment can be administered, obviating the need for trained personnel to perform injections, has renewed the WHO’s hopes to eradicate yaws by 2020.

Last year the company also made a donation to Hospital do Rim, in São Paulo, supplying more than 40,000 tablets of mycophenolate sodium, a complex generic drug developed in collaboration with Italian laboratory MonteResearch, to help prevent rejection of transplanted organs.

“These donations are an intangible asset and a reputational investment that represents only a slight dent in pharma companies’ deep budgets,” says former vice president of ABIFINA Reinaldo Guimarães. According to the expert, medicine donations will not directly lead to new contracts or an edge over competitors, but are ethical business practices that should be replicated to the extent possible.