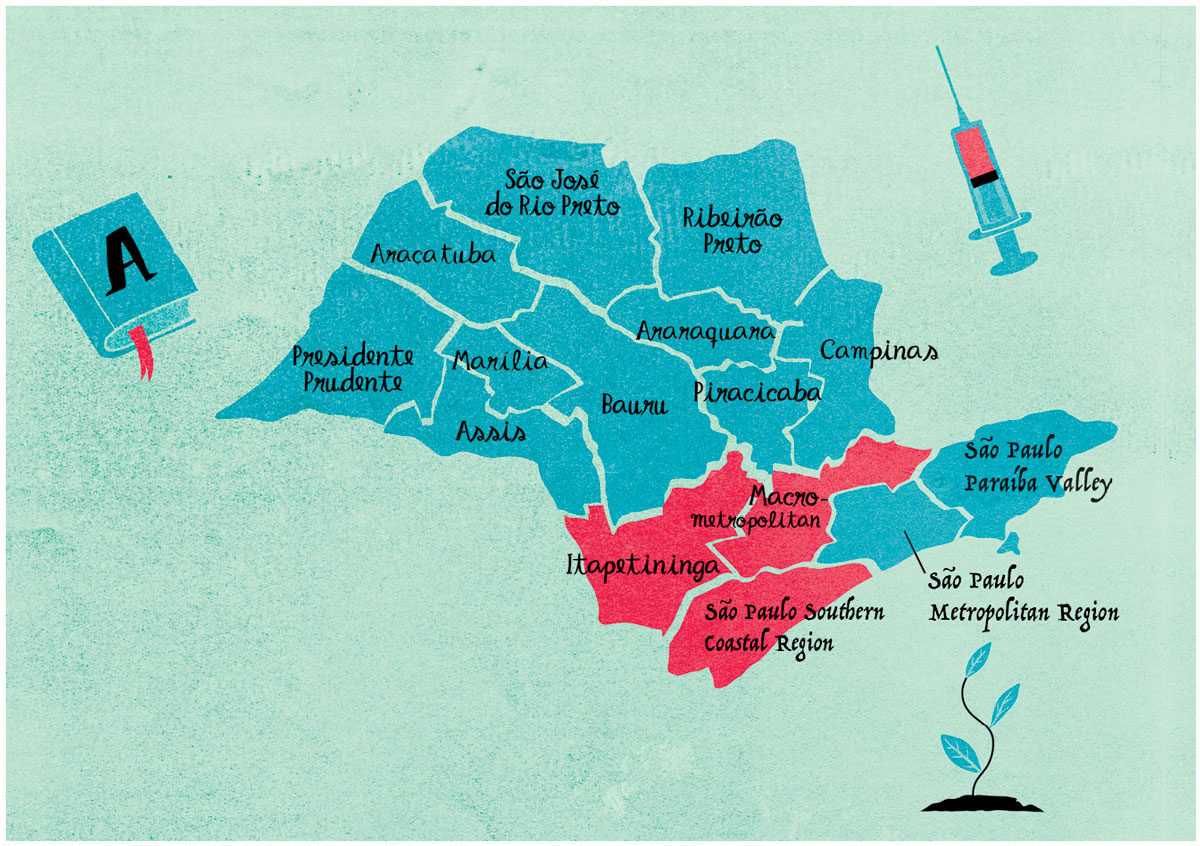 In February 2017, the Academy of Sciences of the State of São Paulo (Aciesp) introduced a survey regarding the scientific competencies of each of the 15 administrative regions of the state. Titled Map of Science in São Paulo, the study assembles a set of indicators from 2002 to 2011 that show everything from the concentration of researchers in each region and their fields of knowledge to the size and impact of their scientific production. Also included are graphs that group the researchers according to the number of articles published in two time periods—over the entire 10 years of the study and between 2009 and 2011. “This is a snapshot of São Paulo science during the first decade of the 21st century. It shows the different kinds of expertise by region in this state that is directly responsible for half of all Brazil’s scientific production,” says Marcos Buckeridge, a professor at the Biosciences Institute of the University of São Paulo (USP) and president of ACIESP. “The idea was to have a data platform that can be consulted by entrepreneurs interested in opening new businesses, for example. There they will find out the location of well-established researchers who could help them deal with their challenges,” says José Eduardo Krieger, dean of research at USP who was president of ACIESP until 2015, when the study was commissioned. The entire map can be seen at bit.ly/MapaCiênciaSP.

Sponsored by Banco Bradesco, the map, as was expected, shows a heavy concentration of researchers along the São Paulo-Campinas axis. However, it also reveals some nuances. The São Paulo Metropolitan Region (SPMR), the site of two USP campuses as well as public universities such as the federal universities of São Paulo (UNIFESP) and the ABC (UFABC) and private institutions such as Mackenzie or the Getúlio Vargas Foundation, has the most scientists in nearly every field of knowledge. However, the lead is more significant in some fields. This is true of Applied Social Sciences, with 59% of the state’s researchers; Health Sciences, with 54.9%; Linguistics, Literature, and Arts with 54.3%; and Human Sciences, with 51%. In other fields, leadership occurs but by smaller margins. In Exact and Earth Sciences, 38% of researchers live in the SPMR. The regions of Campinas (16.6%) and Araraquara (15.3%) rank second and third. However, in Engineering, São Paulo is at the top of the list, with 36.8% of all researchers, followed by Campinas (18.5%) and the Paraíba Valley region (15.2%). “The survey shows clearly that, although competencies are concentrated in the SPMR, other parts of the state exhibit specific areas of expertise,” says Buckeridge, referring to the Araraquara Metropolitan Region, which boasts USP campuses, the São Paulo State University (Unesp), and the Federal University of São Carlos (UFSCar) while in the Paraíba Valley an aerospace hub has emerged around São José dos Campos.

There is one field of knowledge in which the São Paulo Metropolitan Region does not contain the largest contingent of science professionals. This area is Agricultural Sciences, in which Campinas appears with 22% of the state’s researchers, followed by São Paulo, with 19.3%; Piracicaba, with 15.3%; and Ribeirão Preto, with 13.6%. “What created the equilibrium is the presence in the Campinas region of the Agronomic Institute and the University of Campinas (Unicamp),” Buckeridge says. “In turn, the significance of Piracicaba relates to the Luiz de Queiroz College of Agriculture, which is part of USP.”

Economist Marcelo Pinho, a professor at UFSCar, recommends caution when making comparisons among regions. “The comparability of the data is impaired by the enormous disparity between the dimensions of the mesoregions in both demographic and economic terms,” he says. He notes that the SPMR has approximately 20 million residents while the Araraquara region has yet to reach one million. “It would be more prudent to filter that difference by evaluating scientific production per 100,000 residents or by GDP,” he says. According to Pinho, the concentration of researchers in greater São Paulo should attract attention only after it exceeds 50%, the figure corresponding to the percentage that the capital city and its vicinity represent in the state population as a whole. “That happens only in Health Sciences and in the group of subject fields associated with Humanities and Social Sciences, including Linguistics, Literature, and Arts.”

Having expressed those reservations, Marcelo Pinho says that the data reflect regional concentrations of competencies that were already known. “It is not surprising that the Piracicaba region, which has less than 4% of the state’s population accounts for 15% of the researchers in Agricultural Sciences and occupies an even more prominent position, considering researchers that exhibit the highest productivity. Something similar can be said of the Araraquara mesoregion, which includes São Carlos, with regard to Engineering and Exact and Earth Sciences. With approximately 2% of the state’s population, that region is home to 14% and 15% of the researchers in those two fields of knowledge, respectively,” he says. According to Pinho, the data confirm the presence of a reasonable degree of spatial distribution of scientific capabilities throughout the state. “This is a positive result of the policies that have been followed for many decades, namely the deconcentration of the locations of universities and research institutions.

To Renato Garcia, a professor at the Economics Institute of Unicamp, the data from the map suggest that policies in recent years have encouraged a greater concentration of scientific activities rather than a decentralization. “There has been an expansion of higher education, but most of it occurred near the city of São Paulo,” he says, referring to the establishment of the UFABC and installation of UNIFESP campuses in the cities of Santos, Diadema, Guarulhos, São José dos Campos, and Osasco. “In most cases the expansion was not designed to promote regional development,” he says. Even in the case of the UFSCar campus installed in Sorocaba in 2011, says Garcia, the local impact will not be felt for some time. “They are hiring researchers who have potential and are already attracting master’s candidates, but doctoral students are still opting to attend more well-established centers. It takes about 20 years for a scientific competency to become well-established in a region.”

The analysis used as its starting point the figures compiled by the Research Groups Directory (DGP) of the National Council for Scientific and Technological Development (CNPq), which compiles information on Brazilian researchers on its Lattes Platform. When studying the production by São Paulo State researchers on the DGP site, names of other collaborators emerged – expanding the size of the survey universe to 1.2 million résumés. Using information technology tools, the data were checked to prevent double counting and cross-checked against data on citations from Google Scholar. The methodology developed was refined under a project supported by FAPESP as part of its Innovative Research in Small Businesses Program (PIPE) program. “For some years, we had been developing scientific-technological databases and tools for treating and analyzing data, but the PIPE project provided for the improvements and further sophistication of the tools that we used in constructing the Map of Science and in other projects,” says computer engineer Luiz Daniel Lapolla, of Elabora P&D, Computação e Sistemas de Informática.

The survey shows that significant knowledge can be produced even in regions where the concentration of researchers is not particularly notable. The study reports the number of articles produced in each region by field of knowledge, the citations that those papers obtained, and the relationships between articles and citations. Again, taking Agricultural Sciences as an example, we find that the Paraíba Valley produced only 785 articles between 2002 and 2011; however, they were the target of 10,707 citations, resulting in 13.64 citations per article. That ratio is better than the ratio for Campinas (7,684 articles and 67,451 citations) with 8.78 citations per article or for Piracicaba (7,118 articles with 60,829 citations) with 8.55 citations per article.

In some regions both the concentrations of researchers and scientific production are low. The extreme cases are São Paulo’s Southern Coastal region, which has 17 municipalities surrounding Itanhaém and Registro, and the contiguous Itapetininga region with 35 municipalities. Both have only a few dozen researchers in each field of knowledge. The gaps in terms of science coincide with areas of low economic activity. The Southern Coastal region includes the Ribeira Valley, one of the poorest areas in the state. Its annual per capita GDP is R$24,500 according to Brazilian Institute of Geography and Statistics (IBGE) figures for 2013. In Itapetininga, income is even lower at R$22,600 per inhabitant. In contrast, the per capita GDP in the SPMR is R$44,400 a year, and in Campinas it is R$41,600. Marcos Buckeridge compared the data from the Map of Science with the Human Development Index (HDI) for the regions. “There is a correlation with the income indicators from the HDI, but they take off after the number of researchers in a region passes the 2,000 mark,” he says. Buckeridge has observed a relationship, albeit less significant, between scientific performance and indicators of population longevity—but found no correlation with education. “The knowledge generated by the universities seems to have very little influence on the basic education system.”

It takes about 20 years for a scientific competency to become well-established in a region, says UNICAMP’s Renato Garcia

Encouraging scientific activities in those areas poses a challenge, but in the opinion of José Eduardo Krieger it would not be necessary to establish new universities there. “The resources need to be allocated where scientific competencies already exist. What is essential is to identify local vocations and support them,” he states. Renato Garcia argues that one cannot ignore the effect that the establishment of a university or technology hub has on a city. “A campus can change the face of a municipality. It encourages urbanization and attracts people of a high intellectual level, which generates new demands,” he says. “Even the risk of researchers becoming isolated diminishes because of opportunities to collaborate at a distance using information technology.” Garcia warns that we should not expect the same effect on the transfer of knowledge to companies. “For that to occur, there has to be demand. If there are no companies in the region, demand will not exist.”