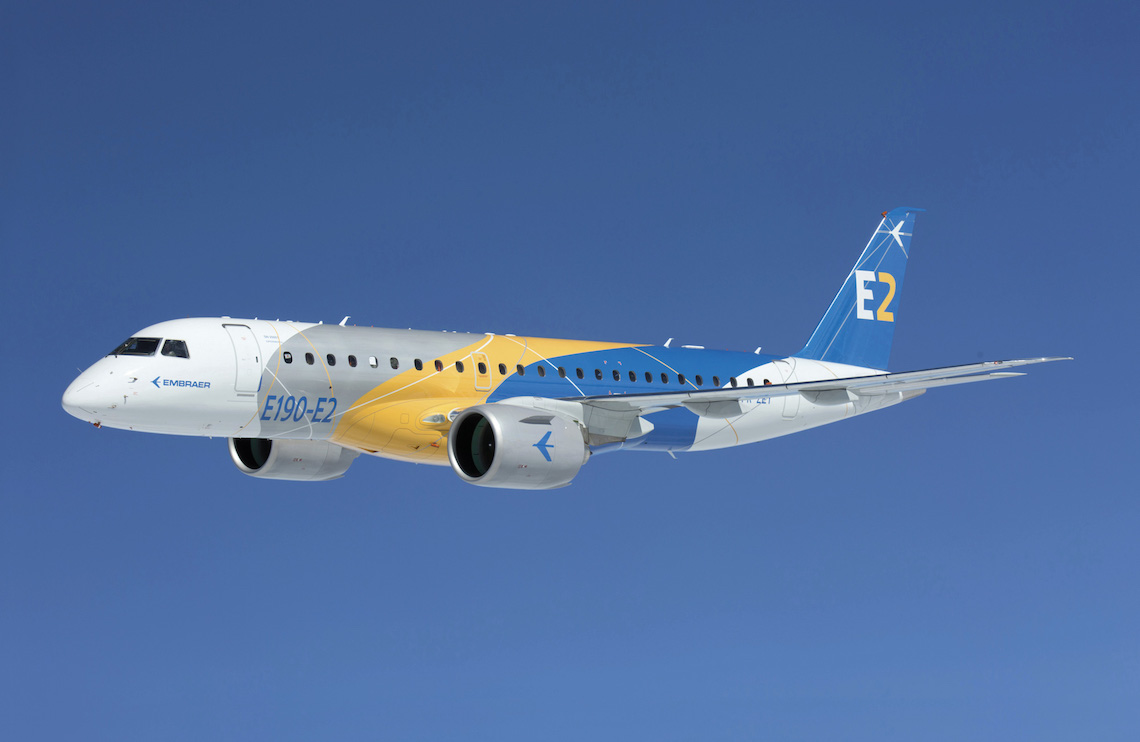 The jet during one of its certification flights

The world’s third-largest commercial aircraft manufacturer and leader in the 150-seat-and-under aircraft segment, Embraer is expected to deliver the first model of its new generation of E-Jets E2 planes in April this year. Named the E190-E2, the aircraft will be a part of the fleet of Norwegian airline Widerøe, which is Scandinavia’s leading regional airline. With a capacity of 114 passengers, the jet delivered better-than-expected performance during its certification-testing period, which is the final stage before an aircraft begins commercial operations. Flight tests showed that the new airplane has a longer flight range and lower pollution emissions, and it is more economical and quieter than originally specified by Embraer.

The superior performance achieved by the E190-E2 is a result of the research and development (R&D) work carried out in Embraer’s labs, the experience of Embraer’s engineers in designing and developing new aircraft, and the lasting partnerships developed with university researchers. “In the past 17 years, no other aircraft manufacturer has developed as many planes as we have,” says Rodrigo Silva e Souza, vice president of marketing at Embraer Commercial Aviation. “During this period, we created the first generation of E-Jets for commercial aviation, various models of executive jets such as the Phenom and Legacy, the KC-390 cargo plane for the defense sector, and finally, the E2.”

According to Embraer, the E190-E2 will arrive in the market replete with innovations—in the fuselage, wing design, landing gear, engines, interiors, avionics, etc.—that will make it the most efficient single-aisle jet on the market. This category includes the traditional Boeing 737 and Airbus A320, as well as the C Series family of aircraft from Bombardier, the Brazilian airline’s chief rival in the regional aviation market. “Our new jet was designed to have a 16% lower fuel consumption performance than the current generation of E-Jets, but it exceeded that target and hit 17.3%,” Souza reports. He adds that with this rating, the plane is about 10% more economical than its direct competitors, the Canadian C Series jets.

This reduction in the fuel consumption gives the E190-E2 two important advantages in the highly competitive aerospace market: the aircraft has lower pollution emissions and better range. Embraer estimates that with the 1.3% improvement in fuel consumption, each jet will emit about 1,700 fewer tons of carbon dioxide (CO₂) over 10 years. For its range, the E190-E2 can reach destinations up to 5,300 kilometers away, as opposed to the 4,500-kilometers range of the current generation of E-Jets. “This additional distance will give airline companies an ability to reach more distant airports, increasing the plane’s adoption,” the Embraer executive pointed out.

Details of tail of the E-Jets E2: the aircraft are more economical and quieter than aircraft of the previous generation

Most of the projected 16% reduction in fuel consumption was due to the use of the new Pratt & Whitney engines, which are more efficient than those on the first-generation E-Jets. The use of these engines accounted for 69% of the improvement initially projected, followed by that due to the introduction of a new wing design (22%) and improved fly-by-wire system (9%). “A fundamental factor in the better-than-expected reduction in fuel consumption—1.3% better—was the improvement of the fly-by-wire system,” Silva notes. With this technology, control of the moving parts on the wings and tail of the airplane (flaps, ailerons, spoilers, slats, and elevators) is performed by computerized electronic controls. Responsible, along with the wings, for the flight characteristics of the airplane, these aerodynamic elements are actuated by the pilot to change the direction, orientation, and level of the flight.

The improvement of the fly-by-wire system of the new jet permitted a 20% reduction in the empennage area (the terminal part of the fuselage, located at the rear, known as the airplane’s tail), minimizing drag and weight. The fly-by-wire system on the E-Jets E2 is the fourth generation designed by Embraer. This technology, which significantly increased the aircraft’s degree of automation, replaced the traditional control system made up of steel cables and hydraulic actuators.

Details of turbine of the E-Jets E2: the aircraft are more economical and quieter than aircraft of the previous generationEmbraer/Publicity

Partnership with Fapesp
Embraer also managed to reduce the noise emissions of the E190-E2 more than originally planned. Designing and developing quieter aircraft capable of operating at airports without disturbing the surrounding residents is a considerable challenge in the aviation industry. “In many airports in Europe and Japan, the landing fee the airline pays is multiplied by the noise factor. So a quieter aircraft can have a lower operating cost,” Silva explains.

Details of landing gear of the E-Jets E2: the aircraft are more economical and quieter than aircraft of the previous generationEmbraer/Publicity

In order to measure and tabulate aircraft noise levels, the International Civil Aviation Organization (ICAO) has established a metric called EPNdB, short for “effective perceived noise in decibels.” This index varies according to airplane size and considers the noise produced by aircraft during takeoff, overflight, and landing approach. During testing, the Embraer jet achieved a cumulative margin of 20 EPNdB in relation to the ICAO limits, 3 EPNdB more than had been projected. The greater the cumulative margin—i.e., the greater the difference between the noise index attained by the airplane and that established by ICAO—the quieter the jet is.

To reduce the noise emitted by its aircraft, Embraer developed an extensive research project. With funding from FAPESP’s Partnership for Technological Innovation (PITE) program, the study “Quiet aircraft: An aeronautics investigation” identified and evaluated the noise generated and propagated by the company’s first generation of E-Jets. The study focused on aerodynamic noise, which is the sound generated by the flow of air passing around the wing and fuselage of an airplane.

Assembly line at the plant in Gavião Peixoto, São Paulo: Embraer has already received 280 orders for the three models in the E2 familyEmbraer

“The knowledge generated throughout the study helped Embraer improve the aerodynamic design of its E2 jets,” says engineer Julio Romano Meneghini of the Polytechnic School of the University of São Paulo (Poli-USP), who coordinated the PITE project conducted from 2008 to 2011. “The research resulted in several numerical simulation tools and generated an international patent for a seal [small strip of flexible material] on the tip of the flap. This was one of the solutions we found to reduce the noise generated by a vortex [spiral of spinning air] during landing and takeoff.”

To engineer André Gasparotti, manager of Embraer’s technological development program, the reduced noise emissions of the E190-E2 is largely due to Embraer’s R&D work over the last 10 years, including that funded by FAPESP. “Our partnership with the Foundation has allowed us to increase our knowledge about noise as well as passenger comfort,” he says.

Another PITE project, whose results were applied to the E190-E2, involved the investigation of passenger well-being during flights; further, criteria for comfort were defined, which were used as planning and design parameters for the company’s new jets. “In our research project ‘Cabin comfort: Development and integrated analysis of comfort criteria,’ we study the influence of different environmental parameters on the passenger, such as of noise, lighting, temperature, pressure, and vibration,” says engineer Jurandir Itizo Yanagihara, also from Poli-USP and the principal investigator for the PITE study. According to Yanagihara, one important feature of the E-Jets E2 is the cabin design, which received contributions from tools developed during the research.

List of orders
Embraer’s new series of E2 jets, which began development in 2013, includes two other models, the E195-E2 and the E175-E2. Embraer received 280 orders for the three aircraft as of March of this year, in addition to approximately 420 intention-to-purchase agreements. Including the four models of the first generation of E-Jets (E170, E175, E190, and E195), the order list jumps to 1,800 firm orders, of which 1,400 have already been delivered.

The Brazilian airline Azul will be the first to receive the E195-E2, the largest commercial aircraft designed and built in Brazil. With a length of 41.5 meters and a 35.1-meter wingspan (distance from wingtip to wingtip), the E195-E2 has a capacity of up to 146 passengers. Delivery of the first unit is planned for 2019. The “baby of the family,” the 90-seat E175-E2 is due to debut in 2021.