Visceral leishmaniasis, which has been thought of as a rural disease restricted to Brazil’s northeastern region up to the 1980s, is moving toward increasingly larger urban centers. Caused by the protozoan Leishmania infantum chagasi and transmitted by bites from the female insects that transmit it, mainly the phlebotomine sandfly species Lutzomyia longipalpis (known locally as the birigui), the disease is currently present in all major regions, with almost half of the cases (47%) concentrated in the northeast of the country, according to the Brazilian Ministry of Health (MS). In 2016, the MS registered 3,626 cases in humans and 275 deaths across the country. In 2017, the states of Rondônia and Amapá recorded the first cases of domestic dogs with leishmaniasis, and the cities of Florianópolis and Porto Alegre saw their first cases in humans.

Since São Paulo registered its first human cases in 1999 in the municipalities of Araçatuba and Birigui in the northwest of that state, visceral leishmaniasis has been spreading toward the coast. Of the 645 municipalities in the state of São Paulo, 177 have already had cases of dogs or people with visceral leishmaniasis. According to a study published in February 2017 in the journal PLOS Neglected Tropical Diseases, by 2020, the number of infected dogs is expected to increase in Balbinos, Sabino, and Guaimbê in the central region of the state as a result of its proximity to the Marechal Rondon highway, high temperatures, and the presence of the insects that transmit the disease; dogs act as reservoirs for the protozoa. The number of infected persons is also expected to increase in Luiziânia, Alto Alegre, and Santópolis do Aguapeí, in the west of the state, because of increased humidity and the combined presence of insects and infected dogs (see the maps).

“Visceral leishmaniasis is advancing because of the lack of information which would permit early diagnosis,” commented parasitologist Mauro Célio de Almeida Marzochi, a researcher at the Oswaldo Cruz Foundation (FIOCRUZ) in Rio de Janeiro, at a scientific meeting held by the São Paulo State Department of Health in late April at the University of São Paulo Medical School (FM-USP). In August and November of 2016, respectively, a 19-month-old boy and his four-year-old brother died from this disease when it was diagnosed late in Guarujá, on the coast of São Paulo. In 2017, Guarujá reported another case, along with Votorantim, a city in São Paulo State near Sorocaba; no deaths occurred. 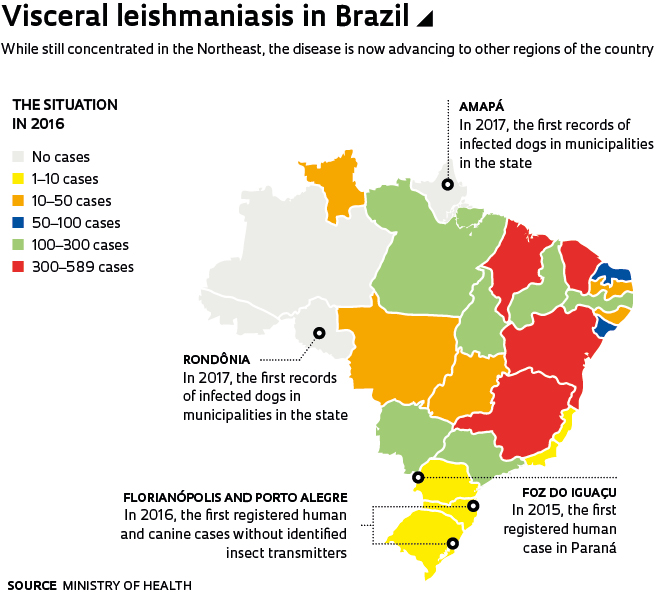 “Lutzomyia longipalpis is well adapted to hot areas with more open vegetation, such as the Cerrado scrublands,” observes biologist Eunice Galati, a professor at the University of São Paulo School of Public Health (FSP-USP). “Deforestation and replacing native vegetation with monocultures can create unfavorable environments for this species, which finds an environment in the cities that allows it to survive.”

Visceral leishmaniasis initially manifests in humans as pallor, continuous fever, weight loss, cough, diarrhea, and swelling of the liver and spleen. It can be fatal in humans if left untreated because of the damage to the liver, spleen, and bone marrow caused by Leishmania. The mortality rate is considered high, 7.8% on average, and few medicines are available that are effective against this disease. The most common treatment is pentavalent antimony, which involves daily intramuscular injections for at least a month. Although it effectively eliminates the parasite, the side effects are intense: the medication can cause muscle aches, nausea, vomiting, kidney inflammation, and gastrointestinal, cardiovascular, and respiratory problems.

Stray and domestic dogs are reservoirs for Leishmania…Léo Ramos Chaves

In areas where visceral leishmaniasis is transmitted, the full disease transmission cycle is not always recognized and includes insects that transmit the disease, dogs, and infected humans. Sometimes only infected dogs and insects are found; other times, only human cases appear, such as in Guarujá. Another situation that can occur is that only dogs and people with leishmaniasis are identified and not any of the known insect vectors. This was the case in Florianópolis, which recorded three cases in humans and 125 infected dogs in 2017.

From 2010 to 2012, biologist Fredy Galvis-Ovallos, a researcher at the FSP-USP, visited the municipalities of Embu das Artes and Cotia in São Paulo to look for the possible origin of cases of canine leishmaniasis, which have been registered in the region since 2003. Lutzomyia longipalpis was not present, but he found many examples of Pintomya fischeri, a species cited as a potential transmitter of Leishmania infantum chagasi. “Even if confirmed, P. fischeri has a lower transmission potential than L. longipalpis, which could explain the lack of human cases in these municipalities.” According to the World Health Organization (WHO), the parasite that causes the disease can be transmitted by approximately 30 species of biting flies around the world.

Visceral leishmaniasis is a problem typical of countries with precarious hygiene conditions, since the insects that transmit the illness reproduce in decomposing organic matter and garbage dumps. Of the 82 countries where it has already been identified, seven concentrated 90% of cases of the disease: India (6,249 cases in 2016), South Sudan (4,175), Sudan (3,810), Brazil (3,336), Ethiopia (1,593), Somalia (781), and Kenya (692). In 2015, the WHO registered 23,084 cases of people infected with visceral leishmaniasis worldwide.

Reassessed strategies
The identification of infected mosquitoes, dogs, or humans in large cities has led to a reassessment of ways to combat the disease. “The strategies for prevention and control should focus on reducing populations of Lutzomyia and blocking contact between them and the hosts in areas with high risk of transmission,” emphasizes veterinarian Anaiá da Paixão Sevá, a researcher at the USP School of Veterinary Medicine and Animal Science (FMVZ-USP) and lead author of the article predicting expansion into areas where infected insects, dogs, and humans are present. Marzochi of FIOCRUZ emphasizes how important it is to look for human and canine cases as a way to reduce the deaths caused by this disease.

Euthanasia of infected dogs, a practice recommended by the government as a way to control visceral leishmaniasis, “is being considered less and less,” says veterinarian Francisco Edilson Ferreira de Lima Júnior of the MS. Euthanasia has proven ineffective because of the high replacement rate for infected dogs, especially puppies, which are more susceptible to the parasite. Furthermore, dog owners can begin treatment with miltefosine, a drug approved for veterinary use in 2017. However, this medication has an initial cost of approximately R$2,000 per month and does not totally eliminate the parasites.

As an additional strategy to control leishmaniasis, the federal government is considering the possibility of distributing collars impregnated with a 4% insecticide solution (if all goes well, starting in 2019) to control visceral leishmaniasis in areas with the greatest risk of transmission. “The use of collars has a greater impact than euthanasia in reducing transmission of visceral leishmaniasis,” says physician and epidemiologist Guilherme Werneck, a professor at the Federal University of Rio de Janeiro (UFRJ). Each collar costs an average of R$100, and they act for four to six months.

The use of these collars on dogs resulted in a 60% reduction in the population of biting flies that transmit the parasite in parts of Fortaleza, Ceará, and a 15% drop in an area of Montes Claros, Minas Gerais, in comparison with control areas in the same cities over 30 months, according to a study published in March 2018 in Memórias do Instituto Oswaldo Cruz (Memoirs of the Oswaldo Cruz Institute), which featured participation by UFRJ and FIOCRUZ. According to Werneck, the Montes Claros study also revealed the limitations of this technique, indicating that the collars need to be applied to more than 75% of the dogs in a region and that up to 40% of collars may be lost in six months.

“The collar protects healthy dogs and prevents transmission in infected ones,” says biologist José Eduardo Tolezano, director of the Center for Parasitology at the Adolfo Lutz Institute (IAL). He headed an assessment of collar use in approximately 10,000 dogs (both infected and uninfected) in Votuporanga, in the northwest region of São Paulo State. The infection rate in the dogs fell from 12% in 2014 to 1.5% at the end of 2015, when the study ended. “There was a clear association between the drop in leishmaniasis cases in dogs and the reduction of cases in humans,” observed Tolezano.

The biologist Osias Rangel, a researcher at the Endemic Diseases Oversight Office (SUCEN), emphasizes: “Actions to control transmitting insects cannot be interrupted. If they are, the disease comes back.” Werneck stresses: “We have to change the pillars which were established many years ago, without scientific evidence, on prevention and control, because today visceral leishmaniasis is an urban disease.”