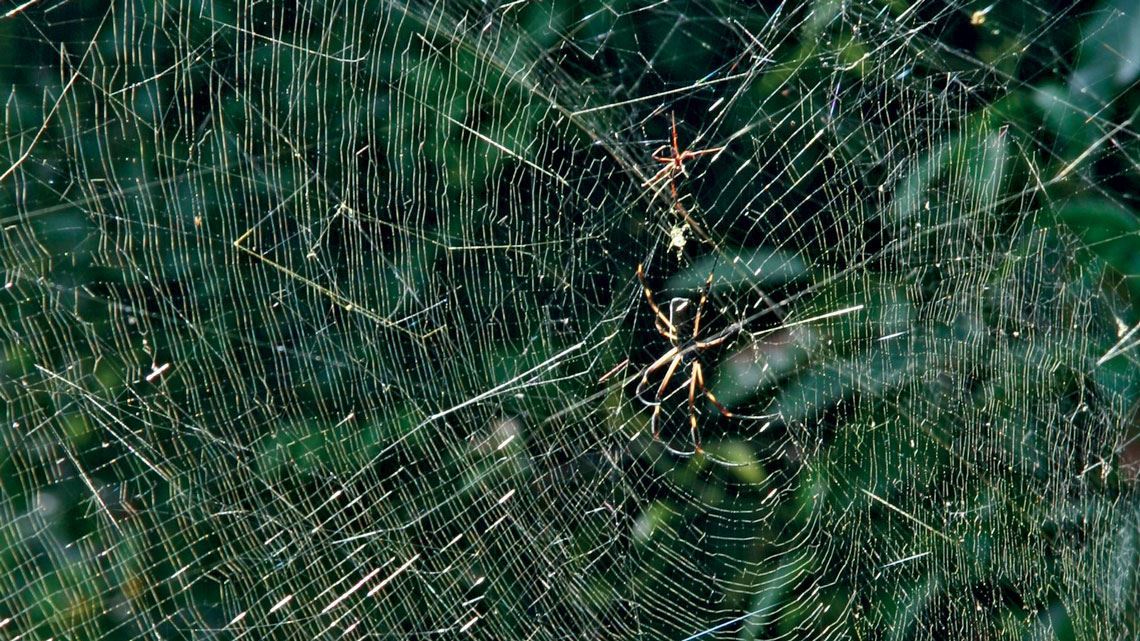 The image of a spider web hanging from a tree usually conveys the idea of something static. The structure seems to be standing there only to wait for some unsuspecting prey to arrive and become physically entangled in it, until the predator can come and finish the job. This perception of how prey capture works isn’t entirely correct, at least for one type of arachnid, known as aerial web-building spiders. A research group from the Biosciences Institute of São Paulo State University (IB-UNESP), at the Rio Claro campus, collected evidence that the web of Trichonephila clavipes, a common spider species in warm parts of the Americas, contains toxins that stun and reduce prey movements, facilitating the subsequent work of killing them. The project was carried out under the FAPESP Biota Program, an initiative celebrating its 20-year anniversary in 2020.

“This spider’s web plays an active role in the process of paralyzing and killing prey using a series of neurotoxins that we have identified,” says chemist Mario Sergio Palma at IB-UNESP, the principal author of a study published on the topic in the Journal of Proteome Research in June. “These spiders always live high in the forest, never going down to the ground, and face an interesting ecological challenge. They do everything in their webs. They eat live insects that are paralyzed in the webs for weeks or even months, due to the action of neurotoxins.” The most common targets in the poisoned web made by T. clavipes females, which measure between 2.5 and 4 centimeters (five to six times larger than males), are small flying insects, such as cicadas, dragonflies, mosquitoes, and bees.

Spiders of this species, normally encountered in Brazil’s Atlantic Rainforest, usually build large, circular webs with yellowish, highly resistant threads. While one rigid silk thread is used to outline the web’s frame, another, more deadly, spiraling thread is used to capture prey. This thread consists of an outer layer of adhesive silk coated with an oily film. Two different types of spider glands, according to the study, are responsible for producing these structures. The spiral threads are extruded from flagelliform glands. The oily layer is deposited simultaneously by the aggregate glands, which also produce droplets—visible to the naked eye—containing neurotoxins, that coat the web threads. 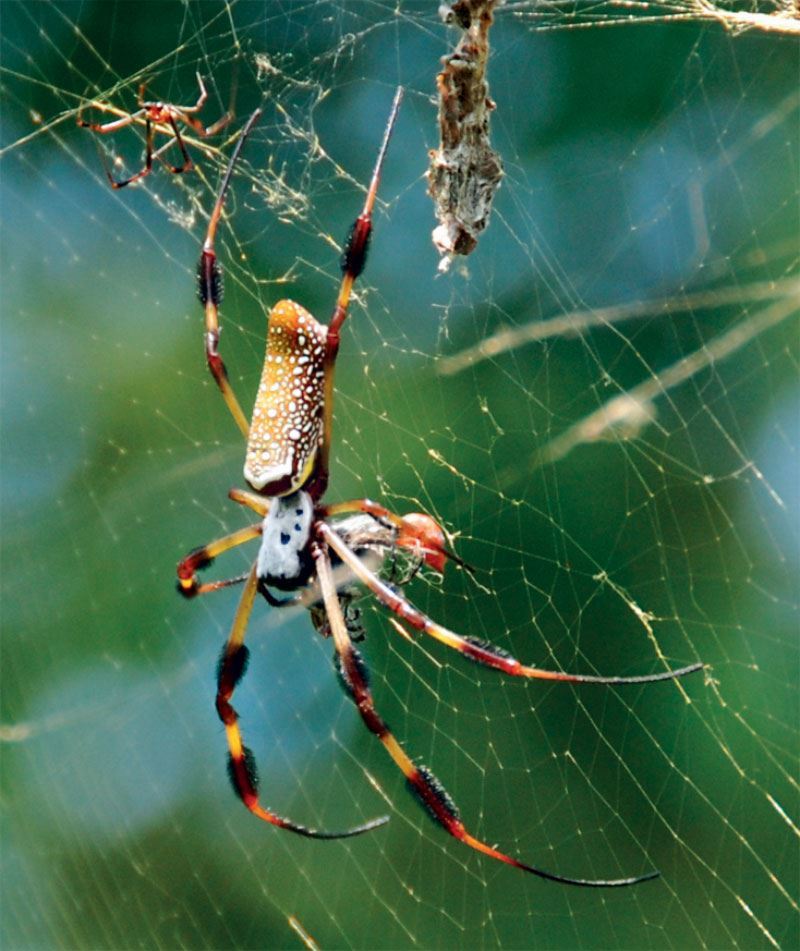 In total, the toxic components found on the weave are secreted by seven different spider abdominal glands, which are also responsible for the production of silk. “The toxins are kept encapsulated in oily droplets scattered throughout the structure of the web”, explains biologist Franciele Grego Esteves, who is pursuing her doctorate under Palma and is one of the study’s authors. The researchers determined the genetic signatures of the substances found in the web and associated them with structures in the spiders’ anatomy. “Each gland plays a different role when assembling the web, by producing threads with differing purposes,” says biologist José Roberto Aparecido dos Santos-Pinto, another of the work’s authors, who is completing a postdoctoral internship at IB. There are threads designed to protect the eggs the female deposits. Others help the spider to escape from potential predators.

The study approach showed the complexity of the processes involved in the spider’s strategy to capture prey. The analyses indicated that the toxic compounds can be lethal or paralyzing and that the presence of certain types of fatty acids in the web enhances the performance of the toxins by getting them into the prey. “The use of a lethal poison to subdue the prey, in combination with the composition of the web, facilitates capture and allows the spider to expend a minimum of energy throughout the process,” says Palma. The idea that all spiders struggle with prey is therefore not always sound science. “The females of T. clavipes usually wait for the web to do the job,” comments the UNESP chemist. The process of secreting toxins coating the structures of the silk threads is constant work. The spider performs its ongoing web maintenance after strong winds, or when a larger predator falls on the threads and damages them.

For German biologist Fritz Vollrath, from the University of Oxford, England, who did not participate in the UNESP group’s research, studies such as those done with T. clavipes indicate just how interesting the adaptive pathways involved in ecological interactions are. “Evolution can result in this: truly complex and multimodal processes that employ very simple rules,” says Vollrath, who specializes in understanding web structures from a zoological standpoint and researching natural silk compounds.

Palma decided to study the predation strategy of this spider species after observing the toxic effect of the threads produced by other orb-weaver spiders in the rice fields of Japan while studying abroad during the 1990s. “When I saw prey fall into the web, I observed that it was desperately struggling to escape, but was unable to,” the UNESP researcher says. “The insect was slightly intoxicated, as if it had come into contact with some drug. There were clear signs of neurotoxic actions. Their legs, for example, didn’t move normally.” Since then the chemist, who studies proteins from Brazilian fauna and flora in search of compounds with potential for therapeutic uses, has included spider webs among his study subjects.