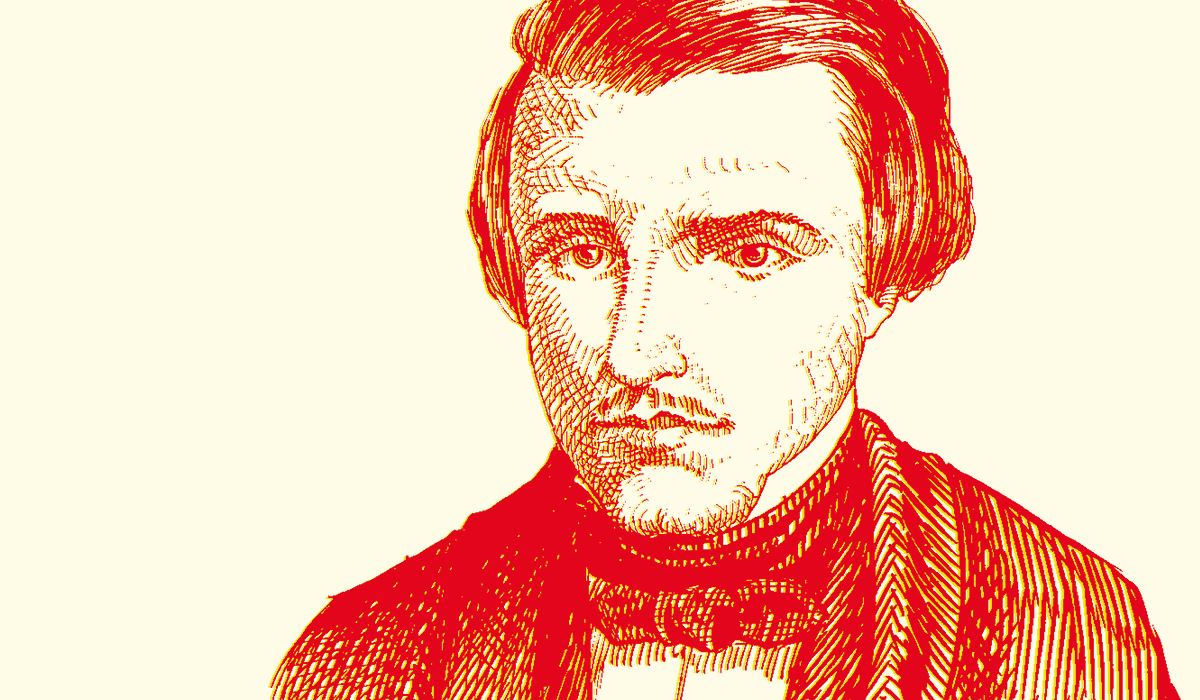 “I have not been idle during these holidays; rather, I have been diving into my reading. In these short three months, I wrote a novel of two hundred pages or so; two poems, one in five cantos and the other in two; an analysis of Musset’s Jacques Rolla; and some extensive literary studies on the simultaneous march of civilization and poetry in Portugal; a fragment of a poem in very archaic language, harder to understand than the Sextets of Friar Antão, but of a different taste, more akin to Chatterton’s Th. Rowley.” This excerpt from a letter written by Manuel Antônio Álvares de Azevedo (1831–1852) to a friend in 1850, at the age of 18, illustrates the poet, critic, and law student’s appreciation for intellectual pursuits. “Although he died very young, at the age of 20, he left a diverse body of work that spans several literary genres, such as prose and drama, as well as literary criticism, and is increasingly relevant,” says Andréa Sirihal Werkema, a professor at the Institute of Languages and Literature of the State University of Rio de Janeiro (UERJ).

Werkema organized the recently released Cuidado, leitor: Álvares de Azevedo pela crítica contemporânea (Reader beware: Álvares de Azevedo through a contemporary critical lens – Alameda/Faperj). The book includes nine essays by Azevedian specialists, such as Cilaine Alves Cunha and Vagner Camilo, both from the University of São Paulo (USP), Wilton José Marques, from the Federal University of São Carlos (UFSCar), and Natália Gonçalves de Souza Santos, from the Federal University of Viçosa (UFV), and is part of the wave of academic studies that, in recent decades, have offered new perspectives on the romantic author’s work. “In the nineteenth century and part of the twentieth century, when analyzing Álvares de Azevedo’s work, critics such as Mário de Andrade (1893–1945) focused on the author’s biography to the detriment of his esthetics—almost as if it had a confessional nature, involuntarily betraying latent impulses. In my opinion, this misconception has put off the analysis of the elements that really matter in his writings, such as irony,” states Camilo, author of Risos entre pares: Poesia e humor românticos (Laughter among peers: Romantic poetry and humor – EDUSP, 1997), the result of his master’s thesis, defended at the University of Campinas (UNICAMP).

“This is partly due to views on Romanticism itself, an artistic and cultural movement that defended the idea of poetry as an expression of the poet’s own experience,” adds Cunha, author of the book O belo e o disforme: Álvares de Azevedo e a ironia romântica (The ugly and the beautiful: Álvares de Azevedo and romantic irony – EDUSP, 1998). When it comes to criticism of Azevedo’s writings, the turning point, according to the researcher, took place in the 1980s, especially through the works “Cavalgada ambígua” (Ambiguous ride) and “A educação pela noite” (Education by night) by the literary critic and USP professor Antonio Candido (1918–2017). “He dove deep into the work of Álvares de Azevedo and challenged the way it had been interpreted up until then—as the product of a rebellious and spoiled student, with little to no influence on his contemporaries—drawing attention instead to the literary aspects,” she explains.

Born in São Paulo into a wealthy family, Álvares de Azevedo grew up in Rio de Janeiro, where he obtained a degree in languages and literature at the age of 16 from the Imperial College of Pedro II. In 1848, he attended the Academy of Social and Legal Sciences of São Paulo, a branch of the Largo de São Francisco Law School, until 1854. “He was not complacent about his hometown and even criticized how the São Paulo streets were paved. But, as Antonio Candido stated, his fictional depiction of São Paulo as having a sullen and melancholic mood has survived history and even reached the movies,” observes Camilo.

Before starting his fifth year of law school, Azevedo spent his holidays in Rio de Janeiro. After suffering a fall while horseback riding, he had to undergo surgery and died, probably of a generalized infection. “Because of his early death, nearly all of his work was published posthumously, initially in two volumes—in 1853 and 1855, respectively—organized by his cousin, Domingos Jaci Monteiro,” says Werkema. 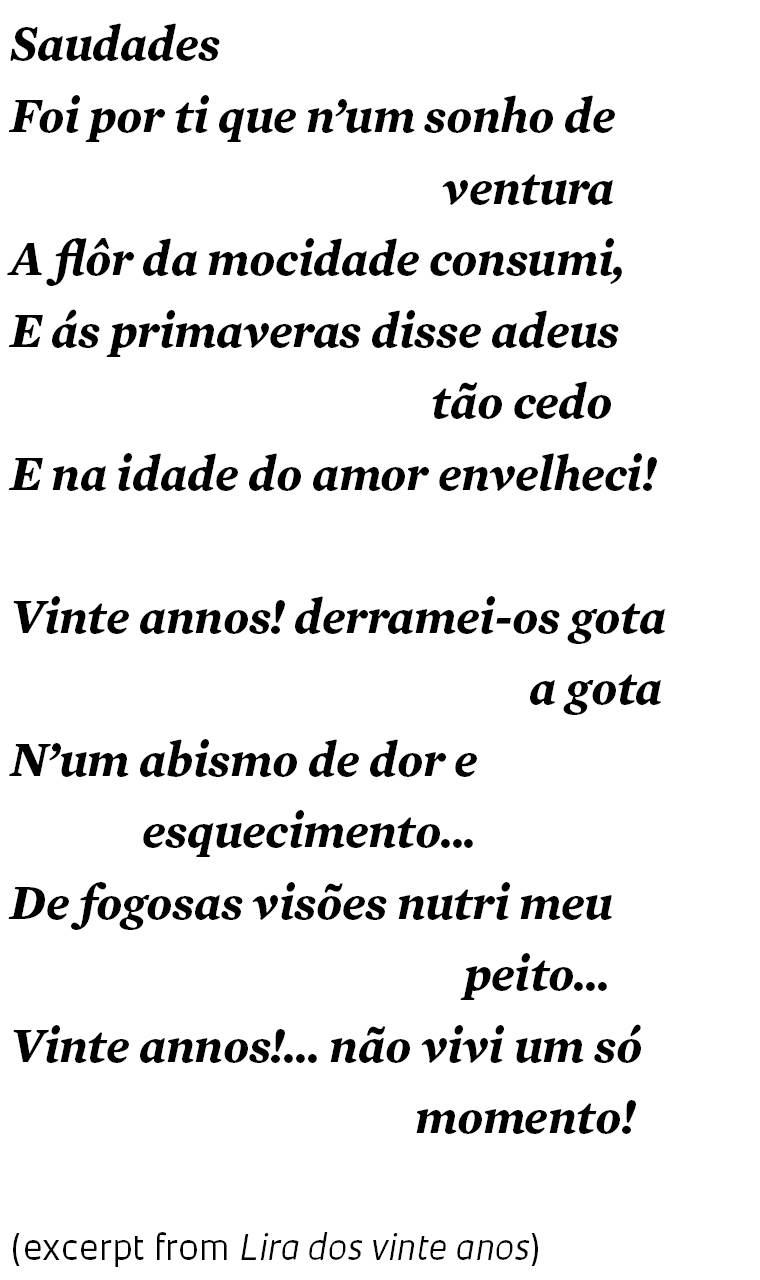 The response was immediate. “Álvares de Azevedo’s work came to light at a time of great political instability in the government of Emperor Pedro II. His work, full of skepticism, matched the climate of the time,” Cunha points out. His success was also due to the stylistic innovations in poems such as “Ideias íntimas” (Intimate ideas) and “Pálida à luz da lâmpada sombria” (Pale by a dim light). “In his poems, Álvares de Azevedo used the clichés of Romanticism ironically, adopting a tone that was informal for the time, as well as depicting everyday objects and scenes in his verses. The way I see it, he created a standard in Brazilian poetry that influenced not only his contemporary poets, but also post-romantic and even modernist poets,” defends Camilo.

One piece of work that has become influential is the novella Noite na taverna (A Night at the Tavern), in which five characters, after participating in an orgy, narrate first-person reminiscences punctuated by themes like cannibalism, incest, and murder. Its impact was such that the politician and intellectual Homero Pires (1887–1962) catalogued, in the 1942 book Obras completas de Álvares de Azevedo (The Complete Works of Álvares de Azevedo), 79 other Gothic novellas inspired by Azevedo’s story, such as Ruínas da glória (Ruins of glory), by Fagundes Varela (1841–1875), and País das quimeras (Chimera country), by Machado de Assis (1839–1908). “Besides making fun of the morals of the time, Noite na taverna was a precursor to the horror genre in Brazil. Although horror is rarely seen in Brazilian literature, Álvares de Azevedo was one of its main writers,” observes Alexandre de Melo Andrade, from the Federal University of Sergipe (UFS). “It is curious to observe how this supernatural atmosphere of imagination and fear created by the writer in the 19th century still fascinates young people,” says the researcher, who is currently preparing a dossier on the romantic author for the academic journal Travessias Interativas, with articles by researchers from institutions such as Fluminense Federal University (UFF) and Pontifical Catholic University of Rio de Janeiro (PUC-RJ).

Although it stands on its own, the narrative of Noite na taverna raised among critics, such as Antonio Candido, a suspicion that it could be a continuation of Macário, a drama written in fragmented, dialogue form, about a student who makes a pact with the devil. “Álvares de Azevedo’s work is full of fragments. It is not known whether this was due to his inability to finish his writings with his premature death, or because he adhered to a popular trend among Romantic authors, such as Goethe (1749–1832),” says Cunha, who collected the two works in the book Macário/Noite na taverna (Editora Globo, 2006). “I tend to believe in the second hypothesis, because he was a radical romantic, who took the search for originality to its maximum impact and was not afraid to experiment.”

Werkema—author of Macário, ou do drama romântico em Álvares de Azevedo (Macário, or romantic drama in the work of Álvares de Azevedo – Editora UFMG, 2012), the result of her PhD thesis at the Federal University of Minas Gerais (UFMG)—agrees. “He knew how to be a unique romantic, embracing contradictions,” she points out. “Nothing is certain in Macário, and this is mirrored in its radical opening, beginning with a fictionalized preface, branching into two complementary and contrasting episodes, and simply appearing to have no end.”

The prefaces written by Álvares de Azevedo for the works Lira dos vinte anos (Twenty-year-old Lyre), Conde Lopo (Count Lopo), and Macário inspired the master’s thesis of Natália Gonçalves de Souza Santos, now a professor at UFV, in Minas Gerais. The study, conducted at USP with funding from FAPESP, resulted in the book Antagonismo e dissolução: O pensamento crítico de Álvares de Azevedo (Antagonism and dissolution: The critical thinking of Álvares de Azevedo – Humanitas, 2014). In her PhD thesis, defended in 2018 at the same institution and also funded by FAPESP, the researcher analyzed the author’s four essays, including “Literatura e civilização em Portugal” (Literature and civilization in Portugal). With no release date yet, the research is set to be published by EDUSP under the provisional title of Um leitor inconformado: Álvares de Azevedo e a literatura comparada (A nonconformist reader: Álvares de Azevedo and comparative literature).

“Among other things, he was a nonconformist about the thesis of literary nationalism, of euphemism, of green and yellow ‘Brazilianness’, encouraged by Dom Pedro II and incorporated to some extent by some romantic authors, such as Gonçalves Dias (1823–1864). A thesis that, by the way, won the intellectual debate at that time,” says Santos. “This does not mean that Álvares de Azevedo was against Brazilian culture. On the contrary—he believed that a more cosmopolitan view could enhance our literature and bring more complexity to our cultural identity,” concludes the researcher.