The images to the right show the electrical stimulation pattern generated in the ventromedial nucleus of the hypothalamus when rodents were exposed to cat, snake, and female mouse odors. The green dots represent activated neurons while the purple dots were not activated

When male mice were exposed to the odors of different animals, including some of their predators, different groups of neurons were triggered in the ventromedial nucleus of the hypothalamus, a brain structure associated with feelings of hunger, sexual stimulation, and fear. “Every different smell generates a specific pattern of neuronal activity in this region of the brain,” comments biologist Fabio Papes of the University of Campinas (UNICAMP), leader of the team that carried out the experiment, the results of which appear in an article published in the scientific journal Cell Reports on August 28. The scent of a cat, for example, activates a different set of cells than the scent of female mice (see images).

It is not unheard of for many different areas of the brain to be activated when an animal or a human being is exposed to different odors, including the region of the cerebral cortex involved with smell and even the hypothalamus. But according to previous research, the electrical activity observed in most of these regions appears to be disorganized, with no discernible spatial pattern. The neurons seem to be activated at random. Other studies have also identified activity in the hypothalamus when rodents come into contact with odors, but they only looked at two smells: cats and mice. In the experiment conducted by Papes and his team, the mice were exposed to the scents of cats, leopards, rats, falcons, snakes, owls, and spiders, as well as female and male mice.

Located at the base of the brain, the hypothalamus is an essential structure of the central nervous system and evolutionarily, it is one of the oldest. Among other functions, it controls the production of hormones, such as dopamine, oxytocin, and gonadotropins, and it is associated with instinctive behavior in mammals—actions that occur without any prior learning. In the case of smell, these instincts can be stimulated by pheromones, which are organic molecules that trigger reactions linked to self-defense, mating, aggressiveness, and alarm. 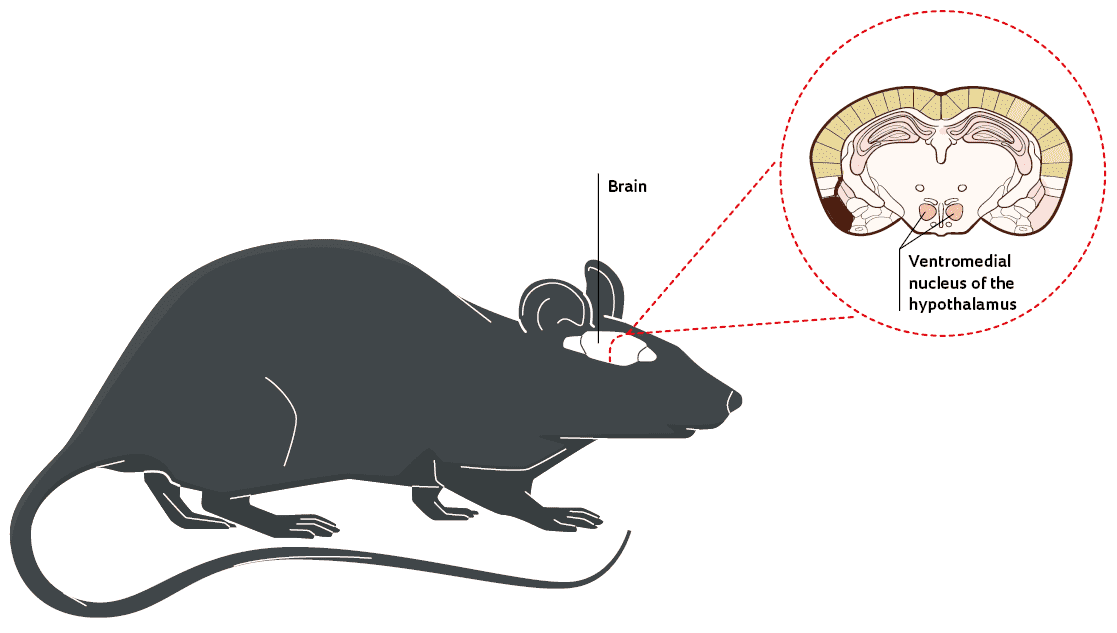 As well as detailing the different patterns triggered in the hypothalamus, Papes and his coauthors, which includes Lisa Stowers, from the Scripps Research Institute in the USA, mapped the path taken by nerve information from the moment the smell is captured to the moment of brain activity. Mammals have several biological structures designed to detect odors, such as the olfactory epithelium at the back of the nasal cavity, and the vomeronasal organ, located between the nose and the mouth. “We found that this activity in the hypothalamus, where a pattern of olfactory information was formed in the brain, which has never been described before, relies on the detection of smells by the vomeronasal organ,” says the biologist. The conclusions were drawn from tests on genetically modified mice whose DNA has been altered to stop the vomeronasal organ from sensing odors. In these mice, exposure to different odors did not activate neurons in the hypothalamus.

The UNICAMP team also tried to analyze whether the brain’s response to different smells relates to the instinctive behaviors triggered by the odors or is caused solely by the stimuli detected in the nose. Based on a range of approaches, including a technique that uses genetically modified viruses to highlight neurons and their connections in the brain, the researchers discovered that the spatial patterns in the hypothalamus are directly linked to activity in the nasal cavity.

Specialist receptor cells in the nose capture smells that activate specific groups of neurons in the vomeronasal organ. For each scent, the study found a correlation between which receptor cells in the nose detect the stimulus and the pattern of activity formed in the hypothalamus. This observation contradicts previous theories that activity in the hypothalamus is associated with the behaviors triggered by odors. In the group’s experiments, no distinct behavioral reactions were observed in the rodents that would have explained the various patterns in the hypothalamus.

In addition to providing fundamental contributions to our understanding of how different scents can trigger specific physiological and behavioral responses, the UNICAMP team’s research may be useful in studying clinical conditions. “The olfactory system is a great model for studying the neural circuits involved in different behaviors, such as aggression, sexual attraction, fear, and stress,” says biochemist Bettina Malnic of the Institute of Chemistry (IQ) at the University of São Paulo (USP), a specialist in the molecular functioning of smell, who did not participate in the study published in Cell Reports. According to Malnic, some of the most important questions in neuroscience are which groups of nerve cells are activated, how these circuits communicate, and which biological functions influence them. For example, the loss of smell, known as anosmia, causes serious limitations to people’s lives and can be an indication of other pathologies, such as COVID-19, of which it is a common early—albeit temporary—symptom.