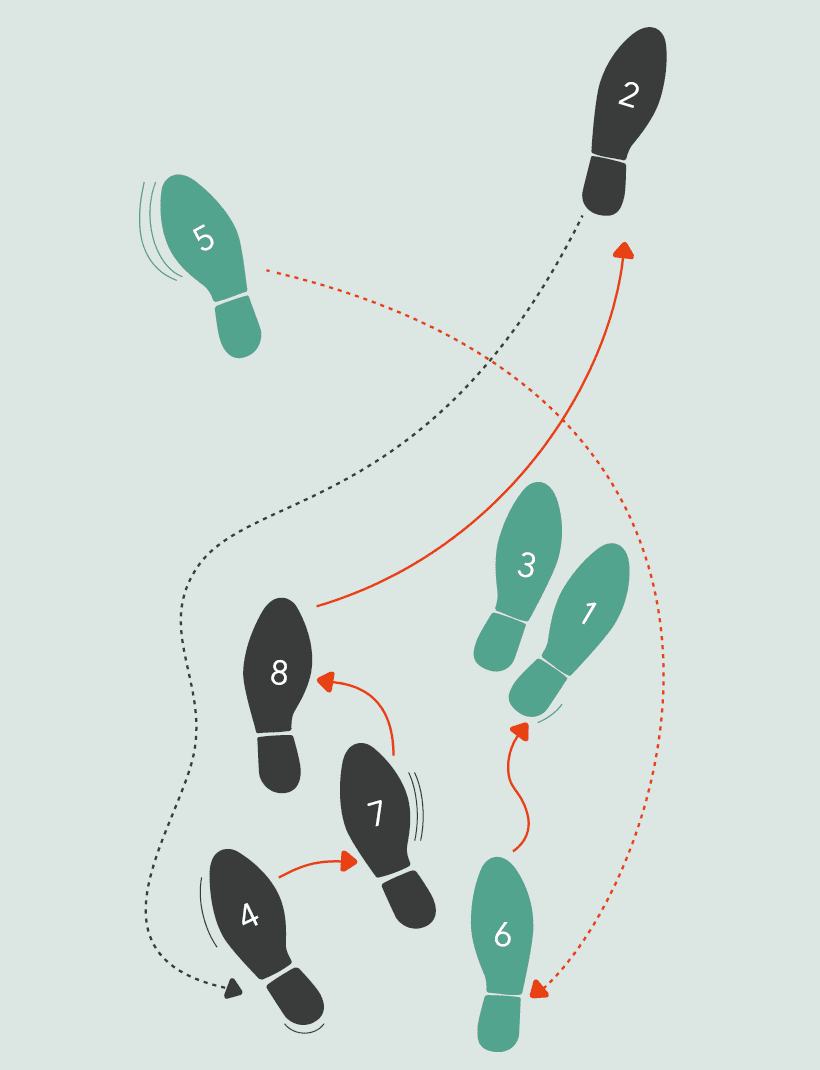 Typical movement of the samba, a four-beat musical rhythmAlexandre Affonso

The brain constantly creates models of the world and uses them to make predictions about what is going to happen. It is an essential survival skill, used to decide the right time to cross a busy street, for example. It is also what a drummer does to immediately pick up the rhythm when joining a group of musicians playing samba. The hypothesis that this ability, intrinsic to the functioning of the brain, is statistical in nature, was suggested by physician and physicist Hermann von Helmholtz (1821–1894). In his 1866 book titled Treatise on Physiological Optics, Helmholtz coined the expression “unconscious inference” for the mechanism. The expression emphasizes the statistical nature of the ability, noting that the stimuli perceived by the brain are intrinsically variable—and that identifying regularities amidst variability is the essence of statistical activity. As a result of this immense variability, however, identifying regularities cannot be limited to recognizing whether exact sequences of events recur in the stimuli. This would be insufficient in the example of crossing a street, since the flow of traffic is not a repeating cycle of fixed vehicle sequences. To complete the task safely, the brain has to identify a regularity amid the variety of vehicles travelling down the street.

A century and a half after Helmholtz presented his theory of unconscious inference, it continues to be investigated by research groups around the world. In recent decades, for example, it has been discovered that the brain is capable of identifying an unexpected event within a repeated sequence of events of the same nature. The irregularity leaves a characteristic signature on the brain’s electrical activity, like a marker of surprise. The current challenge relating to Helmholtz’s hypothesis is to develop a conceptual and experimental framework that allows us to go beyond identifying anomalies amid repetitions. This was the aim of a new mathematical model and original experimental protocol proposed by a multidisciplinary team led by mathematician Antonio Galves of the Institute of Mathematics and Statistics at the University of São Paulo (USP) and neurobiologist Claudia Vargas of the Carlos Chagas Filho Biophysics Institute at the Federal University of Rio de Janeiro (UFRJ), both of which are part of NeoroMat, a Research, Innovation, and Dissemination Center (RIDC) dedicated to Neuromathematics and funded by FAPESP. The model and its results were described in an article published in the journal Scientific Reports on February 10.

In the study, the researchers looked for evidence that the brain effectively identifies regularities in situations much more intricate than the simple occurrence of anomalies among repetitions. They did this by trying to create a simplified model of the brain of a samba musician who arrives at a drumming session, immediately understands the rhythmic structure—however complex it may be—of the music being played, and quickly begins to contribute to the rhythm.

In the experiment, volunteers were exposed to two variable sequences of auditory stimuli while electroencephalographic (EEG) signals were recorded by electrodes attached to their scalp. The stimuli sequences reproduced simplified rhythmic structures of the samba and the waltz. In samba, a strong beat is followed by a soft one, then a silent beat, and then another soft one. In the waltz, a strong beat is followed by two soft beats. In both rhythms, this base sequence loops.

When a drummer plays samba or the waltz, however, these regular periodic structures can be modified, sometimes replacing the soft beat with a silence. When playing live, they make these casual omissions without thinking—the unpredictability makes the rhythms more interesting. In the experiment carried out by the NeuroMat team, random omissions were introduced with a scientific purpose: to find evidence that the participants’ brains were not simply “memorizing” an unchanging periodic sequence, but identifying the procedure that produced the sequence. In order to verify which of the two phenomena was occurring, each volunteer listened to samba and waltz music with different soft beats omitted. 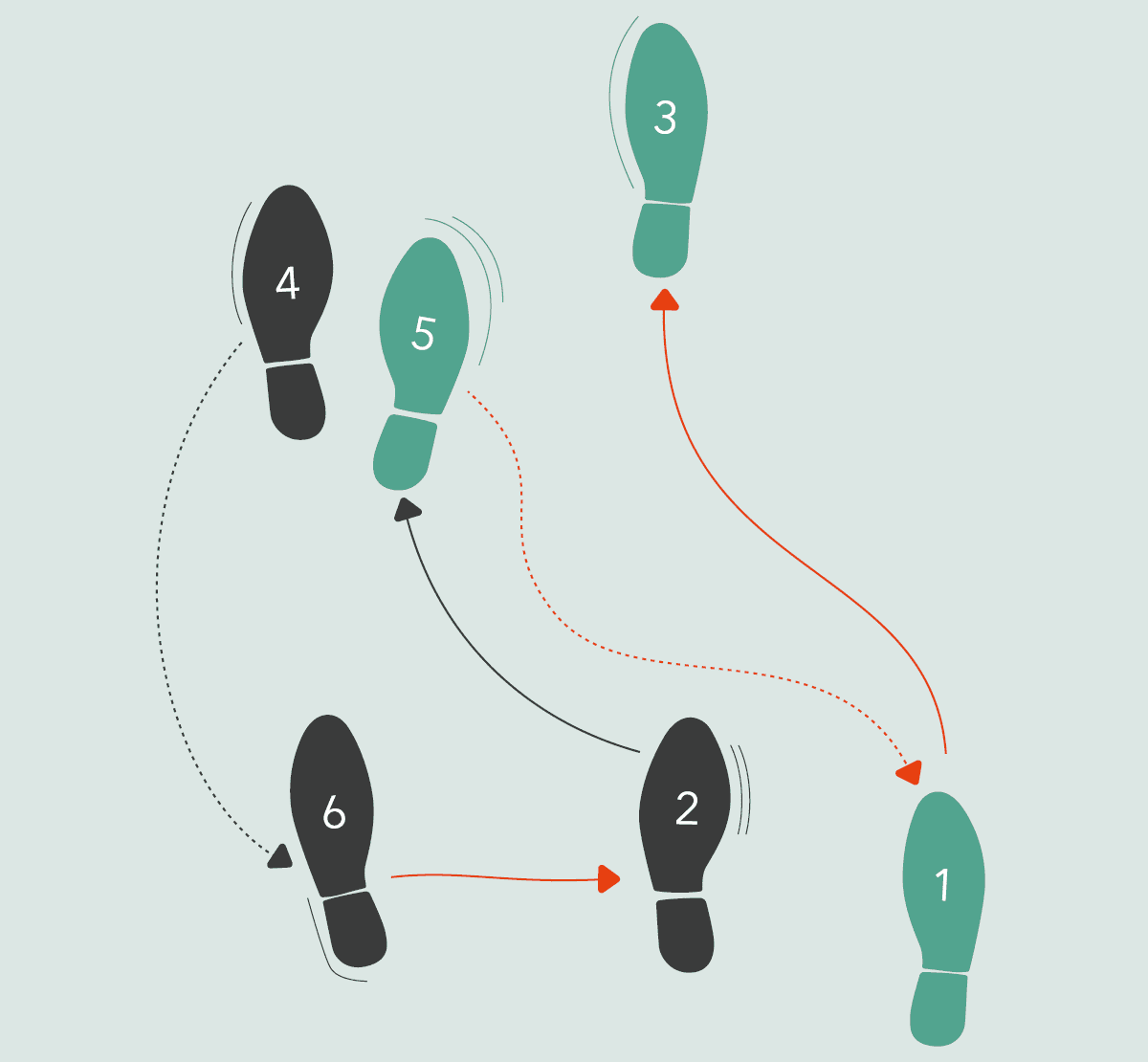 The steps of the waltz, a dance with a triple time signatureAlexandre Affonso

The procedures used to generate the samba and waltz sequences can be understood as algorithms, which in the case of this experiment, expressed how each new stimuli was chosen based on those that came before. The question the researchers wanted to answer was whether it was possible to identify the same algorithms in the EEG results.

In the experimental protocol proposed by the NeuroMat team, an EEG segment was recorded each time an auditory stimulus was presented to the volunteer. The challenge was to discover how the statistical characteristics of each EEG segment relied on the sequence of stimuli presented until that moment. In samba music, a strong beat is followed by a soft beat, then a silent beat, and finally another soft beat. From time to time, however, one of the soft beats was replaced by a silence. If the previous stimulus had been a strong beat, the next stimulus was almost always a soft beat, but occasionally a silent one. The NeuroMat team’s hypothesis was that the EEG recording taken when the volunteer was exposed to a strong beat would express how the next stimulus would be generated as a function of those previously presented.

But why would the characteristics of the EEG segments determine the choice of each new stimulus based on the previous ones? It was already known that an unexpected omission of the weak beat produces a marker of surprise. Therefore, in samba, this marker of surprise should be present in the EEG signal whenever there is an irregular silence. In contrast, there should be no surprise recorded during the occurrence of an expected silence.

The study shows that this effect goes beyond the simple marker of surprise. At each step, the previous stimuli determine how the next stimulus is chosen. After the expected silence, there is almost always a soft beat and occasionally an irregular silence. The occasional silent beat after a loud beat, however, is always followed by a regular silence. It is these different ways of choosing the next stimulus based on those that came before that are encoded in the EEG signal. The researchers generalized this finding to the characteristics of EEG signals associated with each position in the samba and waltz stimulus sequence, and more broadly, to any sequence of stimuli.

The statistical analysis guided by this model found that the characteristics of the algorithms used to create each of the rhythms were reflected in the EEG recordings. The results suggest that despite the variability introduced by random omissions, the participants were able to identify commonalities in the various repetitions of each rhythm.

In conclusion, Galves and Vargas note, “a question derived from Helmholtz’s conjecture led to the construction of a new mathematical model which in turn, indicated the experimental protocol to be used. An innovative statistical methodology also had to be developed to analyze the data. The results of this analysis raised new neurobiological questions and suggested developments to the mathematical model, thus creating a virtuous cycle.”