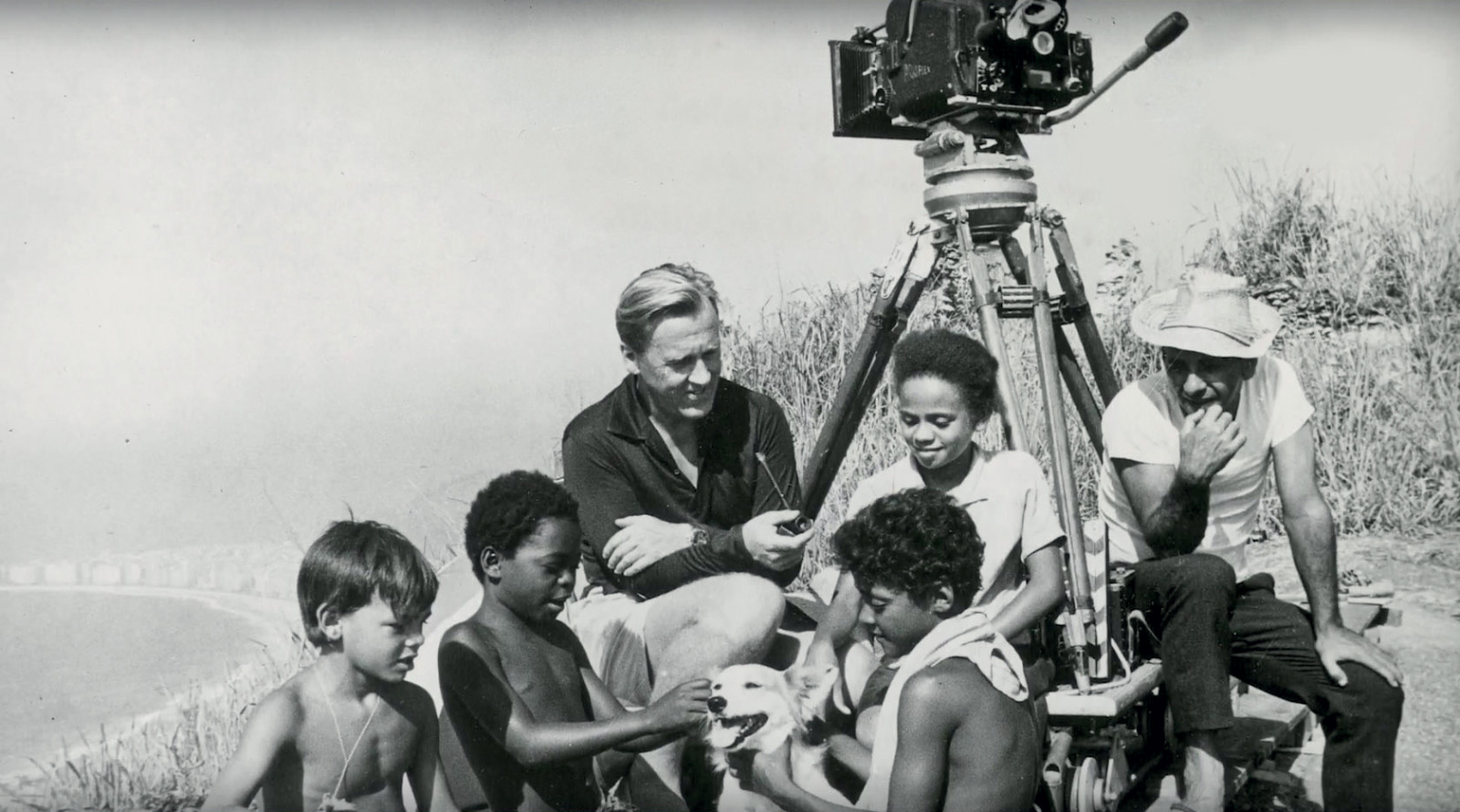 Swedish filmmaker Arne Sucksdorff arrived in Brazil in 1962, when filmmaking was dominated by the desire to turn the camera into an instrument of political intervention and awareness of the national condition. Working on a project developed by the Brazilian Ministry of Foreign Affairs and the United Nations Educational, Scientific and Cultural Organization (UNESCO), his mission was to train filmmakers in the new technology of location sound recording that was revolutionizing world cinema. Here in Brazil, the documentary filmmaker worked with young people interested in Cinema Novo. To give the reader an idea of ​​what the scene was like at the time, the year he arrived here the film O Pagador de Promessas (The Given Word), by Anselmo Duarte, had received the Palme d’Or at Cannes, and Barravento by Glauber Rocha, and Arraial do Cabo by Paulo César Saraceni were being exhibited as films nominated for young filmmakers awards. And 1962 was also the year Cinco Vezes Favela (Favela times five), a series of short films produced by the Center for Popular Culture of the National Students Union (UNE), was premiered.

When he landed in Brazil, Sucksdorff (1917–2001) had already made a name for himself with animal documentaries, such as the 1941 short film A Summer Tale, which shows life on the banks of a lake on the outskirts of Stockholm. But his work was still little known here and, as a fish out of water, he ended up reversing the usual stereotypes that associated Europeans with the avant-garde, and things primitive with South America. “In this case, the Cinema Novo gang was the vanguard,” observes Esther Império Hamburger, a professor in the Department of Film, Radio, and Television at the School of Communications and Arts of the University of São Paulo (ECA-USP), who is making a documentary that includes interviews of former students and others who lived and worked with the Swede in Brazil. She explains that even in regards to technical questions brought about by the cutting-edge equipment, there were tensions.

One example concerned the recording of location sound using the Nagra tape recorder. Such equipment was revolutionizing filmmaking methods around the world, because allowing quality sound to be captured simultaneously with the images prevented the need for studio reconstructions later. This supported the ideal of the handheld camera with which the devotees of the Cinema Novo were identified. “But Sucksdorff used a tripod, dolly, and artificial lighting, so his ability to capture spontaneous movement was more limited than in Direct Cinema,” Hamburger points out, reinforcing the “academic” character of the filmmaker’s relationship to the image.

Although he was an award-winning director—he had received the Oscar for his short film Rhythms of the City in 1948—to this day it’s not known exactly why Sucksdorff was chosen for the project. Filmmaker Eduardo Escorel, who attended the course Sucksdorff taught between November 1962 and February 1963 in Rio de Janeiro, classifies him as “unlucky.” In a series of texts dedicated to the “Sucksdorff mission,” drawn up in 2012 from UNESCO documents, his former pupil says that the Swede was not included among the film directors initially shortlisted for the project, which included better-known names like French filmmaker François Reichenbach (1921–1993).

Even so, his course was highly sought after. In the book Mito do cinema em Mato Grosso: Arne Sucksdorff (A myth of the cinema in Mato Grosso: Arne Sucksdorff), published in 2008, filmmaker Luiz Carlos de Oliveira Borges notes that more than 230 students were registered. After two qualification screenings, only 18 participated in the practical stage, which fewer than 10 would actually finish. Under the direction of fellow pupil and journalist Vladimir Herzog (1937–1975), as its final project the group produced the documentary Marimbás, a short film that used equipment brought in specifically for the course. This was, in fact, one of his legacies: outside school hours, Sucksdorff often loaned the Nagra to other filmmakers. And important films of the time, such as Vidas Secas (Barren Lives) by Nelson Pereira dos Santos, were completed at the editing table acquired by the Ministry of Foreign Affairs.

Having had the intention of making a film in Brazil from the beginning, in 1965 and 1966 Sucksdorff made Fábula (titled My Home is Copacabana in the English and Swedish versions). An 88-minute-long black-and-white film, it tells the story of four children living between the hillside slums of Babylônia and the beaches of Copacabana. “Sucksdorff believed that Cinema Novo prioritized political issues at the expense of poetry. And he made what is perhaps his most critical film—and, in that sense, political—after this clash, or perhaps because of it,” Esther Hamburger notes. Valued not only for being one of the first visual records of a favela (shantytown), but especially for the unique way it portrays the lives of its protagonists, Fábula has been the subject of research by anthropologists since 2010.

The initial scenes are breathtaking. The camera follows Jorginho, a boy holding a kite at the top of a hill above Rio, and captures a sweeping view that includes Copacabana beach, Pão de Açúcar, and Santos Dumont airport. This opening scene is, according to the researcher, one of its most important features: “In many films about Rio communities, the hills almost suffocate the camera. Here, the method of filming doesn’t close off hope or reduce the characters to social categories with predetermined destinies.” Completed at the beginning of the military dictatorship (1964–1985), Fábula was denounced for promoting an undesirable image of the country. It had been showing in Rio for only a week when the cinema where it was being exhibited received bomb threats.

Abroad it encountered a better reception, and was screened in Cannes, France. It’s difficult to see the film in Brazil even today: there is one copy at the film library of the Museum of Modern Art in Rio and another at USP, brought from Sweden as part of Hamburger’s research. This second copy also prompted a comparison study between the more documentary foreign version and the Brazilian edit, which emphasized the fictional story. The differences, probably resulting from censorship that the film faced in Brazil, have become the subject of a DVD, which the researcher hopes to release soon.

Interested in producing a documentary about an indigenous community, in 1966 Sucksdorff traveled to Mato Grosso. The movie never came out, but afterwards he decided to stay in Brazil. In 1970, he married a Brazilian woman and settled in the tropical wetlands known as the Pantanal, living in a kind of encampment, whose daily life the filmmaker recorded in a documentary screened by Swedish television in the 1970s. Their intention was to found a biological reserve, but the couple was unable to do so. “They were persecuted by powerful local landowners and had their land confiscated,” the researcher says. Sucksdorff remained in Brazil until 1993 when, in poor health, he was taken back to Sweden, where he lived on government support until his death.

Fábula is considered his masterpiece and, in Esther Hamburger’s evaluation, has every element needed to be recognized in Brazil as one of the most important films of the time. “We are living, today, in dystopian times, in which people can’t view beyond the horizon. His film is full of sweeping horizons and vast vistas. Sometimes the form is as important as the story that’s being told,” she concludes.

Excerpts from the film Fábula and the interview with Esther Hamburger are available online.