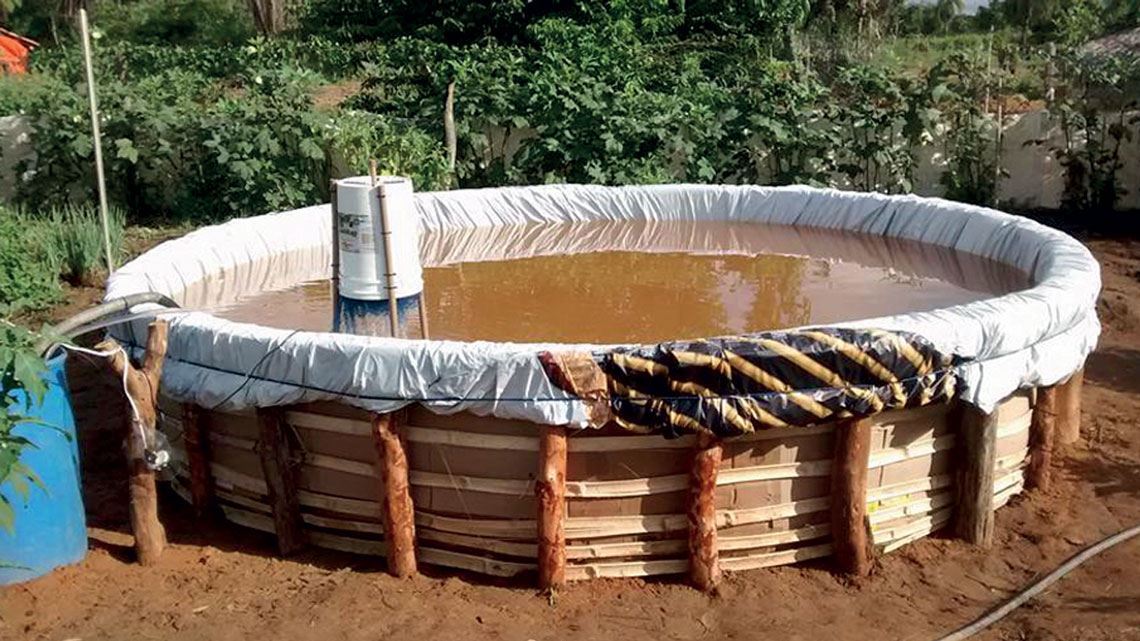 A tank for breeding fish is at the heart of the system. Waste materials rich in nutrients are used by other animal and plant modules

A fish tank is at the heart of an award-winning food production system that is being used by thousands of families, mainly in Brazil’s Northeast, to fight hunger. Developed at the Brazilian Agricultural Research Corporation (EMBRAPA), the technology uses the water and waste products from small-scale aquaculture to support other modules that can improve food security in rural communities—and even in cities.

“The Sisteminha,” as the Integrated Food Production System launched in 2012 has been dubbed, “is above all a tool to fight hunger,” says zoologist Luiz Carlos Guilherme, a researcher at EMBRAPA’s Upper Northeastern chapter in Piauí. “Our main goal is to lift families above the poverty line, helping them to increase diet diversity by as much as 300%,” he says (see the article on food security). “Selling any surplus produce is an added benefit.”

The recommended starter package consists of five modules: a fish tank, laying hens, composting, earthworm production, and a vegetable garden. Families can also choose to raise other animals. All modules are benefited by the nutrient-rich waste produced by the fish tank. Commercial fish feed leaves nitrogen, phosphorus, potassium, calcium, and magnesium in the tank water, which can then be used for irrigation and fertilization.

The round fish tank—around 4.4 m in diameter and 70 centimeters in depth, with a capacity for 10,000 liters of water—demands the greatest initial effort and investment, explains the EMBRAPA researcher, who developed the solution during his doctoral training at the Federal University of Uberlândia (UFU), with funding from the Minas Gerais Research Foundation, which now holds a patent for the system.

In the water-stressed sertão (badlands) of northeastern Brazil, water for the fish tank may need to be purchased from tank trucks, as is common in the region. The package offers relatively inexpensive solutions for building a biological water filter, a recirculating and aeration pump, and a sump tank, which separates solid waste from liquid.

“I first made a very rudimentary and inexpensive tank using babassu palm stems, cardboard, and plastic canvas,” said retired teacher and radio personality Paulo Afonso Silva Santos, better known in the city of Esperantina as “Paulo Brasil”, in an interview with Pesquisa FAPESP. That was back in 2013, when he was first introduced to the system. Since then, he has built a fish tank in every house he has leased, along with the laying hen, goat, composter, and vegetable garden modules.

“We’ve consistently produced around 2 liters of milk a day,” says Brasil, who lives with his wife and three children, aged 6, 10 and 17. “And that’s from a single goat.” With an average flock of 20 chickens, he says he produces 5,500 eggs a year, as well 30 to 40 kilos of tilapia every 100 days. “Because I have physical limitations—I contracted polio as a child—and walk on crutches, I have further perfected the process for minimum effort.” Brasil sells surplus eggs and goat’s milk to friends.

A model for food security
Designed to provide the nutritional requirements of a family of four, the Sisteminha package has been implemented in cities, smallholder settlements, and quilombola and indigenous communities as part of a government program. Since March 2018, nursing technician Cláudia Leal and her daughter, Alba, a computer technician, have been working to replicate the technology in Inajá, a rural town in Pernambuco, where they have set up 13 units in seven communities.

“Each family has between five and eight people, but many more have been reached, as the system has attracted interest from the wider community,” says Cláudia. “Because of the pandemic, demand for fresh vegetables has grown.”

“Interestingly, the most successful units are managed by women,” says Alba Leal. “They do everything on their own. The men in the family are involved only occasionally, as they spend most of their time at work away from home.”

When the system is implemented as part of a government program, says Luiz Guilherme, the amount of government investment is approximately R$15,000 per family. One third of this amount is used for the fish tank and other structures and equipment, another third for one year of fish feed and supplies, and the remainder for technical assistance, monitoring, and travel.

“The family receives this amount as a one-time, upfront investment by the government program. After six or seven months, the family should be able to independently produce food products and purchase animal feed on its own,” says Guilherme. EMBRAPA transfers the technology and provides needed instructions to the farmers or program managers at the start of the program, he explains. “But after the first year, we rely on people who have successfully implemented and mastered the system to teach and support other program participants.”

Biologist Adriana Miranda de Santana Arauco, a professor of soil microbiology in the crop science program at the Federal University of Piauí (UFPI), has shown interest in bringing the new social technology to communities surrounding her campus in Bom Jesus, in the south of the state. “If soil is well managed when growing vegetables and other crops, its natural biological cycle is preserved,” she says. “This is a way to grow food without harming the environment through deforestation or monoculture with the use of chemical fertilizers.”

Among several other accolades, in 2017 the new technology received a Celso Furtado Regional Development Award from the Brazilian Ministry of National Integration. The system has also been used in research projects at schools and universities. A demonstration unit was set up at the Jundiaí School of Agriculture (EAJ), a unit of the Federal University of Rio Grande do Norte (UFRN) specializing in crop science, in the municipality of Macaíba, greater Natal. Karina Ribeiro, extension coordinator at EAJ/UFRN, worked with her students to construct a unit at a municipal school in the state’s southeastern municipality of Lagoa de Pedras, as part of one of her student’s final coursework.

Recently, an extension project to implement the system at an agrarian reform settlement and a traditional quilombola community in Macaíba had to be suspended because of the pandemic. Ribeiro believes the technology can be an important social tool for development. “First, it addresses the family’s or the community’s immediate nutrition needs,” she says. “But the system can also be scaled up, although this would require people to devote themselves entirely to farming. We show people the possibilities, but it’s up to them to take it from there.”