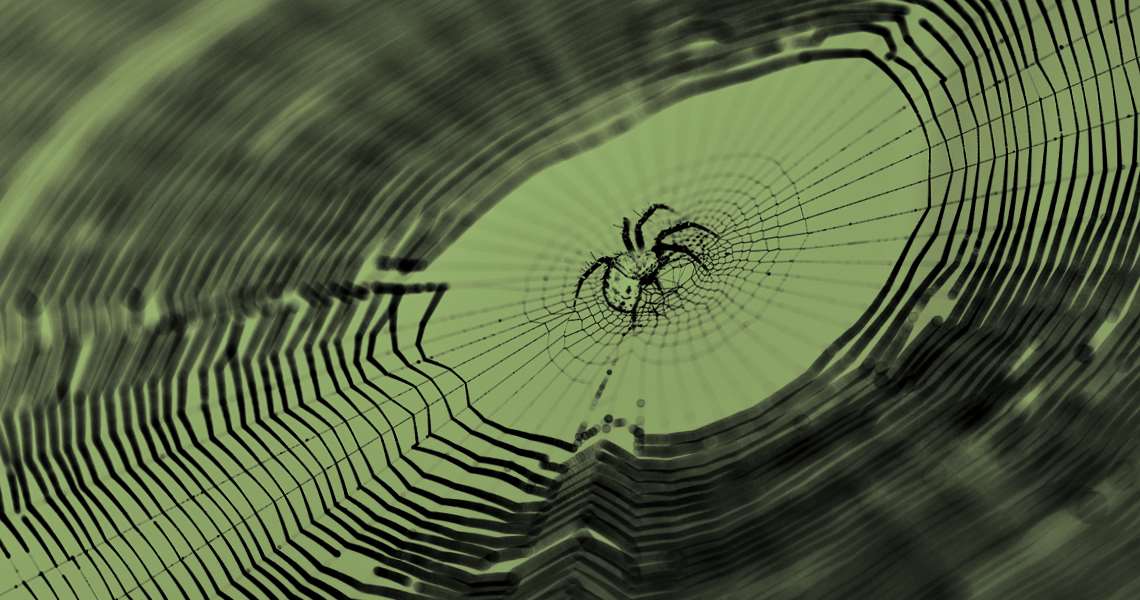 Spiders react to the presence of prey in around 1 millisecond

The building housing the Department of Mechanical Engineering at the University of São Paulo’s Polytechnic School (POLI-USP) has an inner courtyard with a garden of shrubbery, where the shade and freshwater attract mosquitoes and other insects. Lying in wait for these prey are several spiderwebs strung between shrub branches and in the corners of the courtyard walls. “One day I watched as a fly got caught in a web with a spider at the center,” says Alexandre Kawano, a professor in the department. “I marveled as the spider darted and caught its prey as fast as lightning.”

Kawano’s admiration for spider reflexes has grown even further since he started a collaboration with engineer and mathematician Antonino Morassi at the University of Udine, Italy, in 2017, to understand the fundamental physical principles of wave propagation in spider webs, a phenomenon that is still poorly understood. Morassi and two Spanish engineers, Ramón Zaera and Alejandro Soler from University Carlos III, Madrid, had been working on a project to develop a theoretical representation of spiderweb mechanics. Kawano joined up with the Italian to create an algorithm that can reconstruct the forces acting on the web. Their research has shown that minute web vibrations are sufficient for a spider to determine the location and size of its prey. “Our studies have found that the time taken for spiders to detect prey is in the order of 1 millisecond,” says Kawano, who has received FAPESP funding for nanoplate research in collaboration with Morassi. “That’s roughly the reaction time we have found experimentally.”

Using their theoretical representation of a spider’s web, Kawano and Morassi created a mathematical model to explain how spiders detect and capture prey. They reported preliminary findings from their research in a December 2019 paper in the SIAM Journal on Applied Mathematics. Zaera has since joined the duo to numerically validate the results and provide information on real-world webs. The team recently had an article accepted for publication in Mechanical Systems and Signal Processing, in which they attempt to explain how the non-rigid supports to which spiders anchor their webs affect the transmission of information on prey.

Kawano explains that previous research by other groups has attempted to model how mechanical waves propagate across a spider’s web, but they were either too simple or too complex to produce meaningful findings. A spiderweb’s interconnected threads broadcast the vibration induced in one thread across the larger web. More realistic computer models developed in recent years have re-created the precise geometry of natural webs and successfully reproduced the thread movements caused by gusts of wind and captured insects. But because each web configuration results in a different model, these simulations have little value in understanding what engineers and mathematicians refer to as the inverse problem. In an inverse problem, researchers use information on the effect of a phenomenon to determine its cause. For example, the density of the earth can be determined from measurements of its gravity field.

In dealing with spiderwebs, the inverse problem involves determining the minimal amount of information that spiders must capture from the web’s mechanical structure to quickly discern useful information about prey. This was the challenge that attracted the interest of both Morassi, who studies mathematical models of structures, and Kawano, a specialist in inverse-problem mathematics. “Spiderweb research has helped us to better understand how a minute quantity of information can be used to deduce a general property of a structure,” explains the USP professor. “We’ve developed general theories to identify forces acting on large and complex plate-and-shell structures such as bridges, aircraft, ships, and offshore platforms.”

“Modeling how spiders capture prey, if done with sufficient rigor, will generate findings that can then be tested empirically,” says biologist Hilton Japyassú, an animal behavior expert at the Federal University of Bahia (UFBA). “Researchers could expand their research to study why spiders change their stance when they’re hungry, and tighten the longest radial threads in the web.” In 2017, Japyassú and Kevin Laland, a biologist at the University of St. Andrews, proposed a controversial theory about cognition in orb-weaving spiders. According to their theory, a spider’s web is not just a tool for hunting, but an extension of its perceptual organs.

Scientists have long been fascinated by the relationship between spiders and their webs. Observations and studies have shown that spiders sense the world around them primarily through mechanical vibrations captured by their eight legs. Although they have four pairs of eyes, their eyesight is poor, as are their senses of smell and hearing. In an 1880 article in Nature, British physicist Charles Vernon Boys (1855–1944) described an experiment in which he touched on spiderwebs with a small tuning fork. Boys notice that spiders were only attracted to the tuning fork when it vibrated at certain frequencies, and would even attempt to grab and eat it as if it were an insect. Decades later, more sophisticated experiments found that the receptor organs on orb-weavers’ legs can sense web vibration at frequencies of between 10 and 100 hertz.

Scientific articles
KAWANO, A. and MORASSI, A. Detecting a prey in a spider orb web. SIAM Journal on Applied Mathematics. Vol. 79, no. 6. Dec. 12, 2019.
KAWANO, A. et al. The prey’s catching problem in an elastically supported spider orb-web. Mechanical Systems and Signal Processing. Vol. 151. Apr. 2021. In preprint.