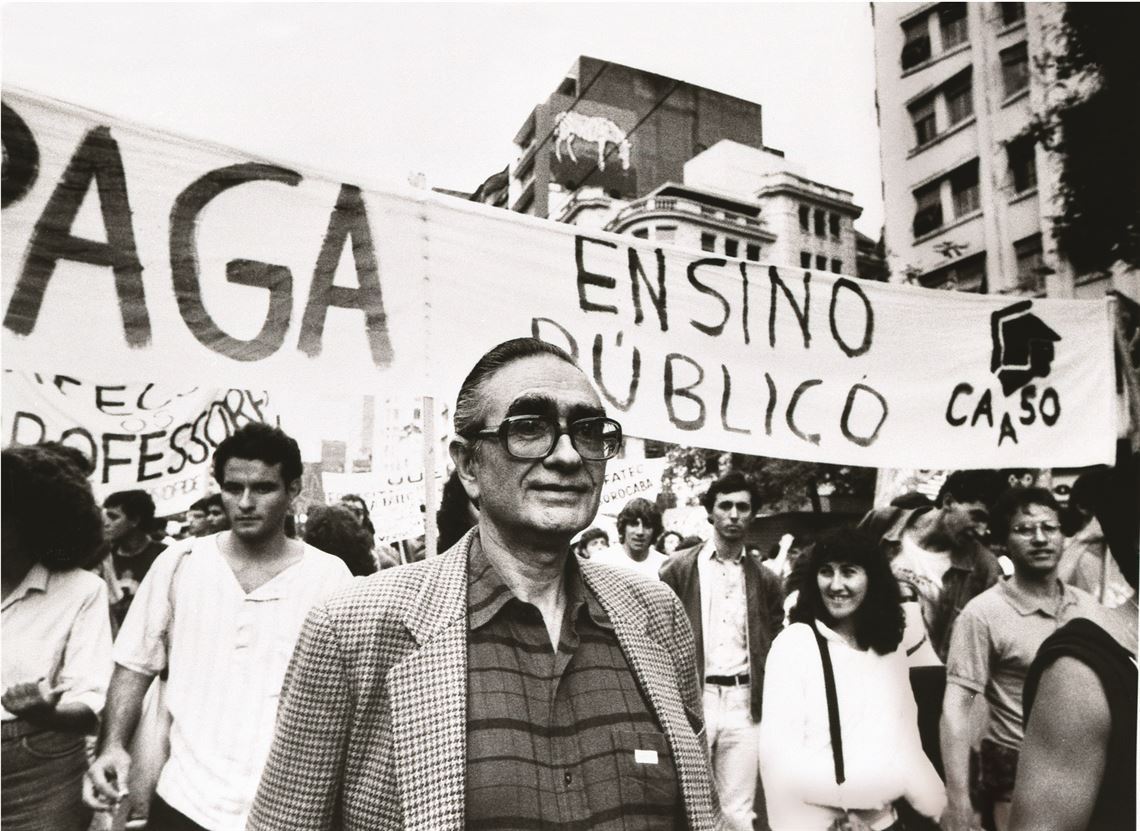 Florestan Fernandes in a 1988 protest in defense of public education

“We do not work for European or North American sociologists, except for indirectly and as a contingency of the very nature of scientific work. The true meaning of our contributions to sociology, however modest or grand, can only be achieved when associated with the need to create a new approach to investigating our social reality, digestible and constructive for future generations of Brazilian specialists, who should not inherit the same flaws and limitations as we did.” So wrote sociologist Florestan Fernandes, in his 1956 article “A Sociologia no Brasil” [Sociology in Brazil]. One of the most significant Brazilian intellectuals of all time, Fernandes died in 1995; July 22 marks the 100th anniversary of his birth.

“Florestan refused to bow to foreign authors and constantly questioned what it meant to be a sociologist in a country on the periphery of capitalism,” shares sociologist Elide Rugai Bastos, from the Institute of Philosophy and Human Sciences at the University of Campinas (IFCH-UNICAMP). A specialist in Fernandes’s work, Bastos is currently putting the finishing touches on a book about the writings of the São Paulo–based intellectual; its working title is A Terceira Margem da Sociologia (The third margin of sociology)—a reference to the short story The Third Bank of the River, by author Guimarães Rosa (1908–1967). “Florestan looked for different answers than those proposed by core countries. Contemporary sociology in peripheral countries is critical of Eurocentrism, but at the time—during the 1940s and 1950s—it was a bold and original view.”

One of Fernandes’s most renowned disciples, former President Fernando Henrique Cardoso, agrees. “Florestan Fernandes knew the distinction between what [Argentine economist Raúl] Prebisch called core and periphery. He focused on the periphery but knew he must consider the system as a whole, meaning he was profoundly serious in his theoretical views. He was never a small-time sociologist, but rather one without adjectives other than those required by science: he was rigorous in his analyses,” declared Cardoso by email to Pesquisa FAPESP. “Throughout my academic career, he taught me that, without a concept or theory, one cannot understand the facts of life. However, having a concept does not exempt the scientist from ‘diving’ into the concrete, the daily life, the relationships between people.”

A Childhood in Poverty
Florestan Fernandes’s entrance to the academic world was rather unique. Raised by his mother, a Portuguese immigrant who worked as a housekeeper, he began working as a shoeshine and tailor’s apprentice while still a child. At 17, as a waiter at Bar Bidu in downtown São Paulo, he was encouraged by the intellectuals who frequented the establishment to further his studies. He proceeded to enroll in Madureza, a secondary school equivalency program for young adults and adults at the time, which he finished in 1941. That same year he was admitted into the social sciences program at the School of Philosophy, Sciences, and Languages and Literature of the University of São Paulo (FFCL-USP). Four years later, he became assistant professor to Fernando de Azevedo (1894–1974), chair of Sociology II at the institution, alongside sociologist and future literary critic Antonio Candido (1918–2017), with whom he remained close for five decades. Their friendship inspired the play Vicente and Antonio, by Oswaldo Mendes, which journalist Florestan Fernandes Júnior, son of the sociologist, intends to stage later this year. “Vicente was how my father used to be called by my grandmother’s employers. They thought the name Florestan—a character from Beethoven’s [1770–1827] opera Fidelio—did not suit the son of a housekeeper,” shares the journalist.

“In Brazil, the first sociology and social sciences programs were established in 1933,” notes Jacob Lima, president of the Brazilian Society of Sociology. “Florestan Fernandes’s greatest legacy was his concern for academic discipline in sociology research and training.” Sociologist Maria Arminda do Nascimento Arruda, director of the USP School of Philosophy, Sciences, and Languages and Literature (FFLCH), believes that Florestan Fernandes is required reading when it comes to understanding the development of social sciences, not only at USP, but in Brazil. “In addition to treating sociology as a science, I believe his greatest innovation was his effort to understand Brazil from the perspective of the people, those excluded from the modernization of Brazil,” states Arruda, a student of his work.

According to Arruda, this is illustrated by Fernandes’s 1975 book A revolução burguesa no Brasil (The bourgeois revolution in Brazil), which has just been rereleased as part of the Florestan Fernandes Collection, published by Contracorrente. “In this era of democracy crisis and obscurantism, it is essential to make his work relevant once again,” defends editor Rafael Valim, who developed the collection along with Florestan Fernandes Júnior. “In this book, Florestan analyzes Brazil beginning in the colonial period,” notes Bernardo Ricupero, a professor at the Department of Political Science at FFLCH and coordinator of the collection. “From the concept of autocracy, he shows that, unlike in France, in Brazil the bourgeois revolution did not break paradigms,” he adds. “On the contrary: the bourgeoisie aligned itself with old oligarchy leaders and seized power to defend private interests. According to the book, this continues to be the case in the country regardless of political regime.”

Fernandes as a schoolboy: third from the right, on the bench
Family archives

The rerelease includes an interview with Gabriel Cohn, a retired professor from the Department of Political Science at FFLCH, who knew Florestan Fernandes, as well as a foreword by sociologists André Botelho and Antonio Brasil Junior, from the Federal University of Rio de Janeiro (UFRJ). “In the book, Florestan draws attention to the fact that, without a change in the social foundation of power, even a transition from dictatorship to a democratic regime would not necessarily forge a democratic society, with rights guaranteed for all. He wrote this in the 1970s, and while he may not have been paid much attention in recent decades, especially in the euphoria that followed the reinstatement of democracy, nowadays his views are, unfortunately, more relevant than ever,” Botelho assesses.

According to Brasil Junior, the book signals that, in Brazil, the bourgeois revolution “was carried out by white people and for white people.” This conclusion relates to another of Fernandes’s classics, the book A integração do negro na sociedade de classes (The integration of blacks into class society), his 1964 professorship thesis at USP, which will likely also be re-released by Contracorrente. “In a way, it represents the end of Florestan’s research with Roger Bastide [1898–1974], begun in the early 1950s,” according to Ricupero, referring to the study on race relations in the city of São Paulo developed by Fernandes alongside the French sociologist, whose research assistants included Fernando Henrique Cardoso and Octavio Ianni (1926–2004).

The research was part of UNESCO, the United Nations Educational, Scientific and Cultural Organization. “After the horror of World War II, UNESCO set out to develop an antiracist agenda and decided to investigate the issue in our country, where it was believed that race relations were harmonious,” shares Brasil Junior regarding the initiative, which involved various research institutions in the states of Bahia, Rio de Janeiro, Pernambuco, and São Paulo. According to the UFRJ sociologist, this racial democracy myth was strongly questioned, especially in the research conducted in São Paulo and Rio de Janeiro. “Florestan continued to investigate this issue in his work and show how the denial of racial conflict serves an extremely conservative and perverse purpose, as if it were a non-issue that, therefore, doesn’t need to be solved.”

Changing the World
According to Antonio Candido, it was after Fernandes carried out this research project for UNESCO that his “scientist and revolutionary” sides began to merge into one. “This moment seems to me to be the great turning point of his career and sociological work,” observed the literary critic in Florestan Fernandes: Leituras e legados (Florestan Fernandes: Readings and legacies), published by Global Editora in 2010. He “slid from more academic-oriented studies to those that require a political stance on the part of the conscientious scholar.” In the 1940s, Florestan Fernandes joined the Revolutionary Socialist Party and even translated A contribution to the critique of political economy, written by Karl Marx (1818–1883) in 1859. At that same time, he married Myriam Rodrigues Fernandes, with whom he had six children.

In the early 1960s, the desire to change society led Fernandes to campaign in defense of public education. “He used to say that, without open, public, secular education, we would never be able to change Brazil,” recalls Arruda. Developed within the scope of the debate around the Law of Guidelines and Foundations for National Education, the campaign happened in response to the alternate bill written in 1959 by National Democratic Union congressman Carlos Lacerda (1914–1977). The passing of the bill, which defended the interests of private schools, by Congress in 1960 sparked protests in several Brazilian cities, under the slogan “public money for public schools.” During that time, Fernandes held more than 55 conferences throughout Brazil. “The movement was successful in part; it caused significant changes to the law. But it did not achieve its ultimate goal: the end of public funding for private education,” reports journalist Haroldo Ceravolo Sereza in the biography Florestan, a inteligência militante (Florestan, brilliant activist) (Boitempo Editorial, 2005).

The military dictatorship (1964–1985) tried to contain Fernandes’s activism. In 1964, he was imprisoned for three days. In 1969, after being forced to retire by Institutional Act No. 5, he accepted an invitation to teach at the University of Toronto, Canada, where he moved without his family. In 1977, four years after returning to Brazil, he became a professor at the Pontifical Catholic University of São Paulo (PUC-SP). Elected to Congress through the Workers’ Party (PT), he had 34 of his 96 proposals incorporated into the Federal Constitution of 1988, including one that ensured the autonomy of universities and allowed state governments to allocate part of their resources to scientific research institutions (see Pesquisa FAPESP issue no. 274). He then served another four years (1990–1994) in Congress. He died in August 1995, at 75, six days after undergoing a liver transplant. In addition to his wife and children, he was survived by 12 grandchildren and two great-grandchildren, and left behind a legacy of more than 50 books, some of them translated into French, English, German, and Spanish. “He was passionate about Brazil,” concludes Florestan Júnior.