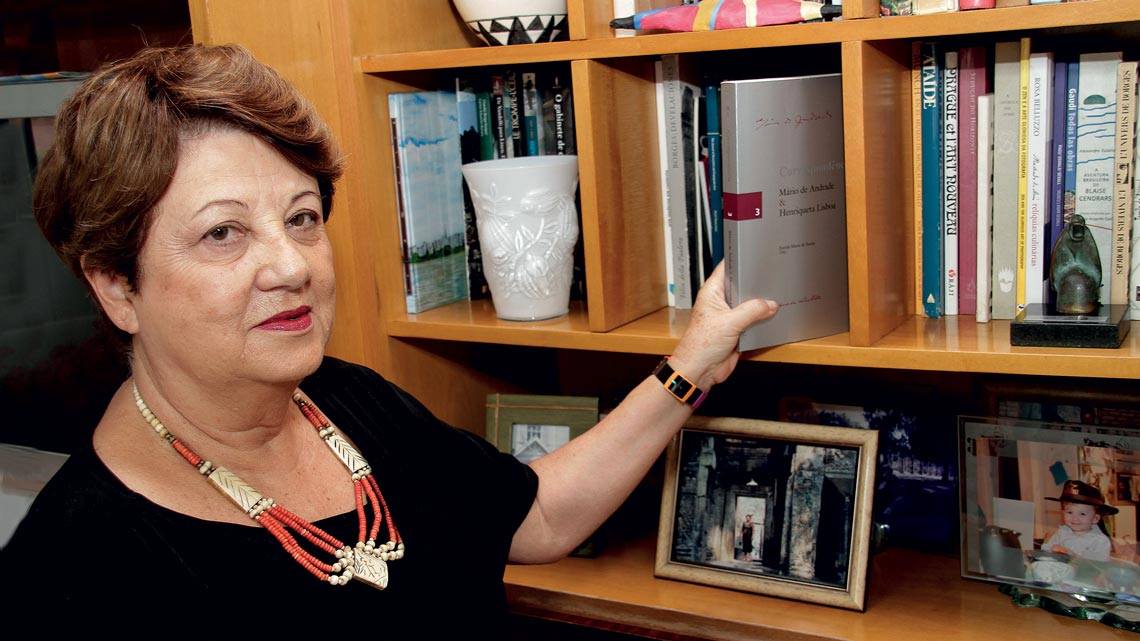 At the library in her home in Belo Horizonte, in 2012

In Brazil, letters, documents, and manuscripts were considered marginal objects for literary analysis until the 1970s. From that time on, through the work of researchers such as critic Eneida Maria de Souza, professor emeritus at the Federal University of Minas Gerais (UFMG), this attitude began to change. With the expansion of research fronts in the field of comparative literature, it became possible to propose new questions in the field of criticism. Souza died from cancer March 1, at the age of 78, leaving behind brothers and nephews.

The researcher was born in Manhuaçu, in the state of Minas Gerais, and received a bachelor’s degree in Letters in 1966 from UFMG. In 1968, she became a professor at the institution’s School of Letters. Seven years later, she earned a master’s degree at the Pontifical Catholic University of Rio de Janeiro (PUC-RJ) with a thesis on the writer Autran Dourado (1926–2012). In 1982, she defended her doctorate at the University of Paris 7, in France, with a dissertation on Macunaíma, by Mário de Andrade (1893–1945). Her dissertation work was guided by the Bulgarian-French literary critic and linguist Julia Kristeva, considered an authority in the field of semiotics research, and resulted in the book A pedra mágica do discurso (The magic stone of discourse) (Editora UFMG, 1988).

A friend and intellectual partner for close to 40 years, Rachel Esteves Lima, a professor of literature at the Federal University of Bahia (UFBA), explains that in her doctorate, Souza’s initial idea was to work exclusively with cordel literature (a traditional Brazilian small book or pamphlet), but she decided to analyze the works of Mário de Andrade and their relationship to Brazilian folklore. “Her research was open to knowledge that was considered of minor import,” says Lima, who is also president of the Brazilian Association of Comparative Literature (ABRALIC).

Roniere Menezes, from the Federal Center for Technological Education of Minas Gerais (CEFET-MG), believes Souza’s doctoral work established new parameters for criticism of the modernist author, by focusing on the dialogues that Macunaíma established between the erudite and popular cultures. “Through de Andrade, she reassessed the notions of literary property and authorship. Eneida was one of the first researchers in the country to carry out a comprehensive study of cordel literature, research that had an impact on her dissertation,” she observes. With other professors, she helped structure the doctoral program in comparative literature at the UFMG School of Letters in 1985 and, four years later, founded the Center for Literary Studies (CEL), with the purpose of promoting research in collections and libraries. That same year she participated in the creation of the Minas Gerais Writer’s Collection (AEM), which began by housing the estate of poet Henriqueta Lisboa (1901–1985) and writers Murilo Rubião (1916–1991) and Oswaldo França Junior (1936–1989). Located in the Central Library of the Pampulha campus, today the collection holds about 30,000 items, including manuscripts, correspondence, photographs, and the personal objects of intellectuals such as writers Cyro dos Anjos (1906–1994) and Fernando Sabino (1923–2004). In 1986, Souza also participated in founding ABRALIC and served as its president from 1989 to 1990.

Sociologist André Botelho, from the Federal University of Rio de Janeiro (UFRJ), explains that because Souza’s theoretical tools were based on thinkers from Russian formalism, structuralism, and poststructuralism, she prioritized the analysis of literary form more than its social context. “Nevertheless, she was also interested in the relationship between literature and society and history, even though these dialogues weren’t uppermost in her thinking,” he adds.

Interest in objects considered marginal also moved Souza to develop seminal studies on the photographic work of Assis Horta (1918–2018) and Chichico Alkmim (1886–1978), and the work of photo-painters from Ceará. According to Lima, Souza’s interest in topics that received less attention led to the development of pioneering studies. An example of this includes her investigations into Henriqueta Lisboa that, in 2010, gave rise to the book Mário de Andrade e Henriqueta Lisboa — Correspondências (EDUSP/Peirópolis).

Souza also became an authority in the field of biographical criticism, an analysis model that “enables the interpretation of literature beyond its intrinsic and exclusive limits, by constructing metaphorical bridges between fact and fiction,” noted the literary critic herself in the book Crítica cult (Cultural criticism) (Editora UFMG, 2002). That is, studies that seek to understand the intellectual trajectory of authors by establishing relationships between historical and social context, biography, and elements of the work. Menezes, from CEFET-MG, observes that Souza was innovative in working with concepts from intellectuals like French sociologist and critic Roland Barthes (1915–1980), such as the idea of the biographeme, according to which life trajectories can be recomposed from details, fragments, and gestures.

As a visiting professor, Souza taught at UFBA, PUC-RJ and UERJ universities in Rio de Janeiro, the Federal University of Rio Grande do Norte (UFRN), and in Nottingham (England), Poitiers (France) and San Andrés (Argentina). “Another fundamental aspect of her career was her vocation for teaching, bringing out concerns and pointing out possibilities for students through an attitude of affection, until the end of her life,” recalls sociologist Mariana Chaguri, from the University of Campinas (UNICAMP). Souza supervised 30 undergraduate research projects, 6 masters theses, 26 doctorates and supervised 10 postdoctoral studies.

Since 2020, Botelho has been involved with Souza in coordinating the Minas Mundo Project, a critical review of modernism. He explains that the initiative seeks to rethink the modernist legacy in dialogue with the concept of cosmopolitanism, while distancing itself from debates that involve national identity. “Souza saw criticism as a gesture of generosity, stating that a good critic is one who makes a double gesture of simultaneously distancing herself from and approaching the object of analysis, placing herself in a middle ground between the present and the past, between the national and the foreign,” says Lima.

“She loved art in a wider dimension than most. There is a huge library in her house, which contains the history of literary theory, but also various handicraft objects,” remembers Lima, who was with Souza in the last days of her life. “Lying in the hospital bed, she was still committed to approving the enrollment of one of her advisees and sending on data about her research projects,” she concludes.