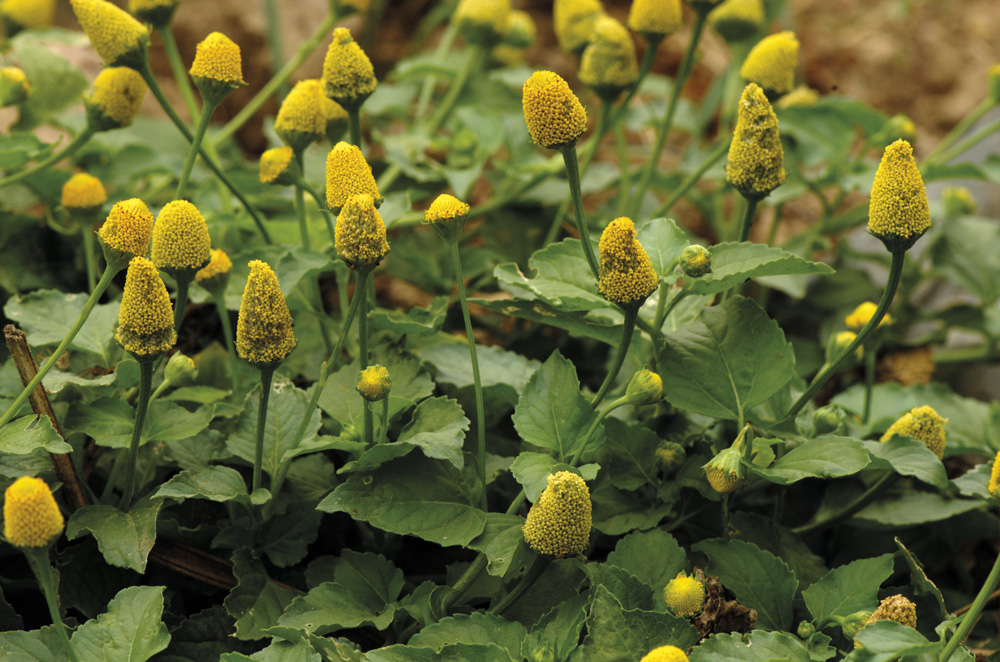 Espilantol, a substance present in the jambu plant, has anesthetic and analgesic effects

Acmella oleracea, known in Brazil as jambu, is widely used in the cuisine of the country’s northern states, particularly Pará, in well-known dishes such as tacacá and duck in tucupi. Besides food, the plant is used by indigenous and river-dwelling peoples as an analgesic and anesthetic drug to treat cold sores, herpes, toothaches, and sore throats. The plant is also known to function against fungus and ticks, which has captured the attention of some researchers interested in developing medications.

Pain relief is the characteristic of jambu that attracts the most attention from researchers as well as gourmands, who feel numbness in the mouth when eating the plant. Since the 1950s it has been known that the anesthetic and analgesic effects are caused by espilantol, although no commercial drugs are based on this substance. This information led industrial pharmacist Rodney Alexandre Ferreira Rodrigues, a professor at the Center for Multidisciplinary Research in Chemistry, Biology, and Agriculture (CPQBA) and the Piracicaba School of Dentistry (FOP), both at the University of Campinas (UNICAMP), to develop a thin dental film in collaboration with master’s student Verônica Santana de Freitas-Blanco.

“Our goal was to produce an oral pre-anesthetic to numb the pain of anesthesia injections,” says Rodrigues. “We purified the plant extract and produced a film incorporating this product. Today, the extract is also being tested in our lab to use against mucositis, inflammation inside the mouth and throat, which is a side effect in patients undergoing chemotherapy.”

Rodrigues says that his group has developed a jambu extraction process that yields more espilantol. He reports that the method is simpler and faster than traditional processes because it has fewer steps and uses cheaper, non-toxic reagents; a patent application has been filed with the Brazilian National Institute of Industrial Property (INPI). “Another advantage is that our purification process eliminates green pigments from chlorophyll, which adds an unwanted color to the extract, mainly in cosmetic uses,” says Rodrigues. “The market does not accept this color.”

UNICAMP has licensed the patent for the jambu extraction process to Brasil Aromáticos, a company located in São Paulo, which intends to use it in the near future. Today the company purchases the unpurified extract for cosmetic use, at a price of R$10,000 per kilogram. “We have obtained the patent and now we are examining the possibility of establishing an extract factory and encouraging farmers to plant jambu here in the southeast,” says Raquel da Cruz, founding partner of Brasil Aromáticos. “We estimate that the price per kilo will be around R$3,000.” The company, which has revenues of R$2.5 million per year and exports its products to several countries, uses jambu extract in an intimate lubricant.

Fighting ticks
The jambu extraction process developed at UNICAMP is also being used to develop products to control the cattle tick (Rhipicephalus microplus) and the Cayenne tick (Amblyomma cajennense). The study, which began in 2015, is led by Luis Adriano Anholeto, who is pursuing his doctorate in biology at São Paulo State University (UNESP), Rio Claro campus, under professors Maria Izabel Camargo-Matias and Patricia Rosa de Oliveira.

The results Anholeto has obtained thus far demonstrate that jambu extract affects tick germ cells (in both males and females), hindering reproduction. Anholeto says that this new knowledge could lead to vegetable-based tick controls. “The idea is to develop a product that causes less damage to the animals and the environment than those available in the market,” he explains.

Karina Neoob de Carvalho Castro, a researcher in the area of animal health at EMBRAPA Meio-Norte, a unit of the Brazilian Agricultural Research Corporation (EMBRAPA) located in Parnaíba, Piauí State, also works with the group at UNESP and intends to develop a natural repellent using jambu. Studies began in 2012 and are being conducted in partnership with other EMBRAPA units and universities. “An extract was produced that killed female ticks and tick larvae in laboratory tests,” says Castro. “In 2014, we showed that the extract impairs reproduction in engorged female ticks—which are ready to lay an average of 3,000 eggs—with up to 98.2% efficiency.” EMBRAPA intends to use this finding to develop a jambu-based repellent that can be used in young animals, which are more sensitive to conventional products.

Under the leadership of biologist Ana Carolina Chagas, the researchers will assess the stability of the formulation in animals and conduct toxicological analysis and pre-clinical testing. Castro stresses that many natural (non-synthetic) products require the development of formulations that can match the acting duration of existing products. This partnership between EMBRAPA and the universities could yield a groundbreaking repellent that utilizes the biodiversity of the Amazon.