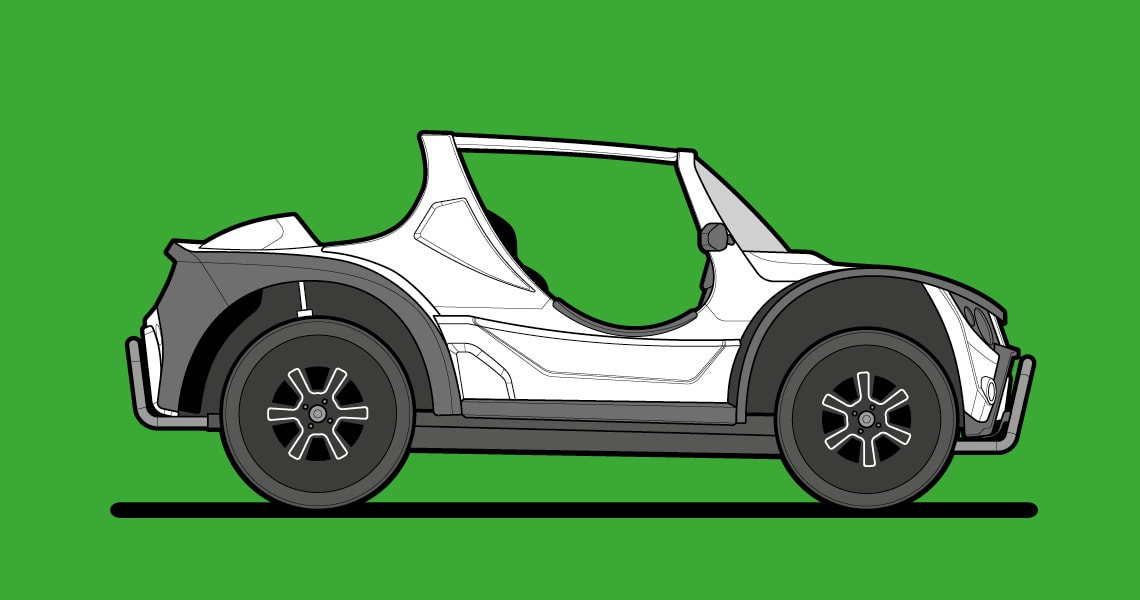 A passion for cars, a knowledge acquired with years of experience in the electric auto sector, and his concern with the impact of pollution on health and the environment motivated Milton Francisco dos Santos Junior, 41, an electrical engineer from Paraná, to face the challenge of designing and producing a 100% Brazilian electric vehicle. In January, after more than two years of research and testing prototypes, he announced the manufacturing launch of the first Buggy Power electric-powered sports cars intended for the tourism sector, mainly hotels and beach resorts.

“I had the help of around 50 professionals, including several friends, to turn this project into a reality, funded with our own resources,” the entrepreneur says, without revealing the amount invested. Studies conducted by his team estimate that there is an annual demand in Brazil for about 1,000 dune buggies. Today the market is dominated by homemade models that run on combustion. The Buggy Power will be produced in three versions (economy, standard, and luxury) starting at around R$99,000. A conventional buggy can be purchased for around R$45,000, while the Chinese-made JAC iEV20, one of the cheapest electric cars sold in Brazil, starts at R$125,000.

Mechanical engineer Manolo Gipiela, one of the directors of eiON, the startup created by Santos, says the vehicle’s development followed the standard innovation process adopted in the automobile industry. “We started working in 2017 and in October of the following year, the first model, called the alpha prototype, was ready,” Gipiela notes. A second, improved prototype called the beta was completed at the end of 2019. “Now we’re starting to manufacture the pioneer production lot, composed of six units.” Known as the pilot phase, it’s used to structure the production chain and make the final adjustments. The cars should be ready during the second half of the year. The company then plans to start commercial production.

The number of electric cars worldwide has continued to grow over the last few years, surpassing five million units in 2018, according to the International Energy Agency’s Global EV Outlook 2019 report. This figure represents an increase of 63% over the previous year. China has the largest fleet, with 45% of the total, followed by Europe (24%), and the United States (22%).

In early 2019, Volkswagen presented the ID. Buggy, a concept car with an electric motor, at the International Motor Show in Geneva. The German company’s buggy will be built on a modular platform, which is to form the basis of a new line of electric vehicles.

“Although Buggy Power is a niche vehicle, it’s important to have a Brazilian company producing an electric car in Brazil,” says electrical engineer Ricardo Takahira, vice coordinator of the Technical Committee on Hybrid and Electric Vehicles at the Society of Mobility Engineers (SAE-Brazil). “eiON’s initiative allows the country to accumulate the know-how to develop more complex electric vehicle projects.”

The vehicle will feature a set of embedded technologies that allows it to be monitored remotely, online.

The Buggy Power project, according to Milton Santos, has a high national content index. This means that the car’s principal components are made in Brazil, with the exception of the cells used in assembling the batteries, which come from China, and the battery management system (BMS) equipment, brought in from the United States. The fiberglass body was created by the startup’s designers and engineers, as was the chassis—the structural framework on which the vehicle is mounted—that’s designed to support the electric motor and batteries. The propulsion system, comprised of the electric motor and frequency inverters that form the power train, is supplied by the Brazilian multinational corporation Weg, in Santa Catarina.

The estimated time for recharging the batteries, according to eiON, is two to five hours, depending on the power source (220 or 110 volts), while the car’s range varies from 150 to 200 kilometers, depending on the version. Santos states that speed and torque are similar to conventional buggies now produced by half a dozen other companies, such as Ceará Fyber and Rio de Janeiro manufacturers Bugre and Baby.

One unique feature is the vehicle’s set of embedded technologies that allows it to be monitored remotely, online. “Imagine a fleet of ten buggies taking tourists along the beaches of Ceará or the dunes of Natal. Using your smartphone you can check the location, speed, battery status, and engine temperature of each of them, from your office,” explains Santos.

eiON, a name that refers to the words electric, intelligent, and online, worked out of its own headquarters in Curitiba until last year. In January, the company moved to the startup accelerator at the National Service for Industrial Training (SENAI), linked to the Federation of Industries of the State of Paraná (FIEP System), which is located at a complex known as the Industry Campus. “We’re next to the Senai Institute for Innovation in Electrochemistry, which does research on electric batteries, and the Center for Sustainable and Intelligent Mobility [inaugurated as the Hybrid and Electric Vehicle Technology Center],” says engineer Hélio Mitsuo Sugai, eiON’s administrative and financial director.

The result of an investment of R$13.7 million, the Center was opened at the end of 2018. “It’s an important initiative. Equipped with advanced labs, it has received support from universities and automakers, such as Renault, which are working to develop an electric vehicle in Brazil,” says Ricardo Guggisberg, president of the Brazilian Electric Vehicle Association. “Paraná has always stood out in the electromobility scene,” he says, recalling the various electric-powered projects (auto, bus, truck, and aircraft) developed by the company Itaipu Binacional, located in the state.

In addition to offering courses for training specialized labor, the Center for Sustainable and Intelligent Mobility puts together innovation projects. The site features 13 classrooms and 8 labs for studying and developing hybrid and electric power trains, battery charging stations, and V2X communication platforms (for communications between vehicles and the surrounding environment), which equip autonomous cars and other systems.

Santos hopes that eiON’s proximity to the innovation ecosystem at the Industry Campus will help the startup raise funds to manufacture an electric car well into the future. Simpler models of battery-powered vehicles, such as tricycles and golf carts, are already made in Brazil. The first Brazilian model of electric auto, a mini-car for two passengers named the Itaipu, was designed in the 1970s by automaker Gurgel (see Pesquisa FAPESP issue no. 104), but was never produced. That model, however, served as the basis for the Itaipu E-400, a utility vehicle manufactured in 1981 and 1982 that sold few units.