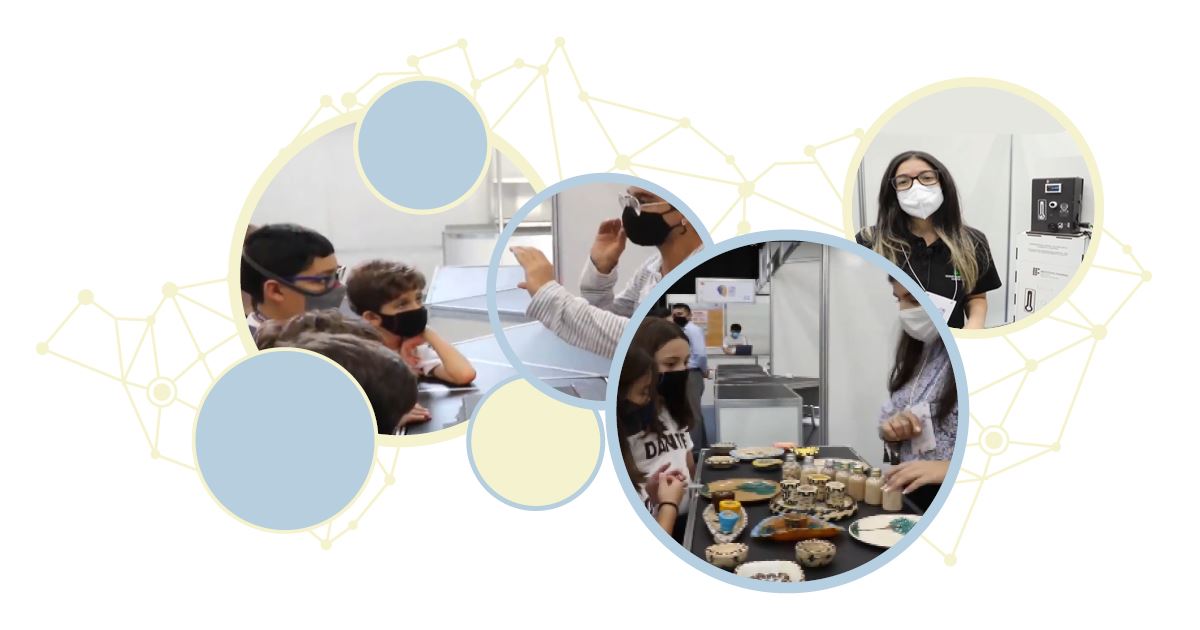 Students present their work at the 3rd FeNaDante fair, conceived by the school's scientific initiation program

Residents of Palotina in the state of Paraná have faced several outbreaks of dengue. In the west of the state, near the border with Paraguay, vast rural areas and poor basic sanitation encourage the proliferation of the viral vector mosquito aedes aegypti. Paraná as a whole suffers from the problem: between January and September this year, more than 27,000 cases of the disease were confirmed. “Since dengue is very common here, I started thinking about ways to combat the problem in a more practical way,” says 18-year-old student João Pedro Silvestre Armani. In his final year of high school at the Terra do Saber municipal school in Palotina, Armani developed an insecticide based on tilapia scales, grape husks, and coffee beans, which inhibits the activity of the mosquito’s central nervous system. “We only work with waste from natural materials, which do not harm the environment,” says the student. The project began in early 2020, before the pandemic. To conduct tests on the insect’s eggs and larvae, Armani set up a small laboratory in his home under the supervision of his advisor, biologist Carlise Debastiani. “The effectiveness of the compound had to be analyzed once an hour,” she recalls.

The study won the health sciences field in the Leonardo da Vinci category at the 3rd Dante Alighieri National Science and Technology Fair (FeNaDante), held in September by Colégio Dante Alighieri, a private school in São Paulo founded 100 years ago by Italian immigrants. More than 300 research projects were registered—of these, 214 were selected to take part, an increase over the 180 of last year. More than half were from São Paulo, but the fair attracted projects from another 15 Brazilian states and the Federal District. This year, the event went international, with schools participating from seven countries through partnerships established by the school: Canada, Cuba, Malaysia, Mexico, Paraguay, Peru, and Italy.

Some of the research conducted by students outside Brazil caught the attention of the judging panel, which comprises researchers such as Marcelo Guzzo from the Physics Institute of the University of Campinas (UNICAMP) and Cláudia Aparecida Soares Machado, who is a postdoctoral fellow at the Polytechnic School of the University of São Paulo (USP). A group of students from the Dr. Eusebio Ayala Municipal Education Center in Paraguay took third place in health sciences for creating a cereal bar based on seeds from a local plant, Amaranthus retroflexus, which is high in proteins and amino acids. “Exchanging experiences with students from other states and countries is very enriching,” says Sandra Tonidandel, pedagogical director of Dante Alighieri’s middle school and high school, who first came up with the idea of the fair. “The plan is to increasingly expand the scope of the science fair.”

The research projects are divided into three broad categories. The Leonardo da Vinci category includes works that have already presented partial or full results. The Galileu Galilei category is for projects with a defined methodology but no results. Finally, the Michelangelo category covers research proposals that need guidance before they can be carried out. In each of the categories, there are awards for eight areas of knowledge: biology, exact and earth sciences, human sciences, health, agriculture, applied social sciences, engineering, and technology. The finalists in the Leonardo da Vinci and Galileu Galilei categories qualify to participate in scientific events in Brazil and abroad, such as USP’s Brazilian Science and Engineering Fair (Febrace) in São Paulo, the International Innovation, Science, and Technology Fair in Juchitán, Mexico, and the Latin American Science Conference in Trujillo, Peru.

This year, the projects were presented between the 21st and 23rd of September at a hybrid conference held online and in person due to the pandemic. Participants were instructed to record short, objective videos about their research in accessible language. “It was a great experience for us,” says 17-year-old Hiago de Oliveira Lacerda, a student at Newton de Oliveira Paiva state school in Santo Antônio do Amparo, Minas Gerais. Together with his twin sister Letícia and his classmate Luana Peixoto Borges, Lacerda’s work aims to raise awareness about the use of pesticides and won first place in the human sciences field of the Leonardo da Vinci category. The group developed a biofertilizer composed of eggshells, coffee powder, and a natural pesticide made from castor bean leaves. “These ingredients are used as organic fertilizer where we live,” says the student. They started their research before the pandemic, with promising results. The students enrolled in a scientific initiation fair hosted by the Brazilian National Council for Scientific and Technological Development (CNPq) and won a R$100 six-month scholarship, which they used from January to June this year. The funding was used to record a podcast about pesticides.

Since 2006, Colégio Dante Alighieri has been investing in scientific initiation projects for elementary and high school students through its Scientist Apprentice program. “The results have been exceptional, earning recognition at student competitions,” says professor Tonidandel, who created the program and received an honorable mention at the Genius Olympiad show in the USA for her contribution. The conception of the FeNaDante science fair three years ago was a natural process and is already bearing fruit—first place in technology was awarded to a student from the school itself, Henrique Rodrigues Hissa Amorim, who developed a virtual reality environment for teaching astrobiology. He created various physical spaces with planets using a computer graphics algorithm called Marching Cubes, as well as other tools.

There was also success in applied social sciences, in which the top award was granted to Aine Carolina Lima, a student at Colégio Etapa in São Paulo. Lima partnered with Avante, a fintech that specializes in microcredit, to analyze the impact of this type of financing on female small business owners in Northeast Brazil. The results showed that women tend to benefit more than men from the opportunity to obtain microcredit. They were able to increase their income by almost 20% in the period studied, compared to 14.6% among men. “Applied human and social sciences have also presented sophisticated projects. We need contributions from all fields of knowledge,” says Tonidandel.