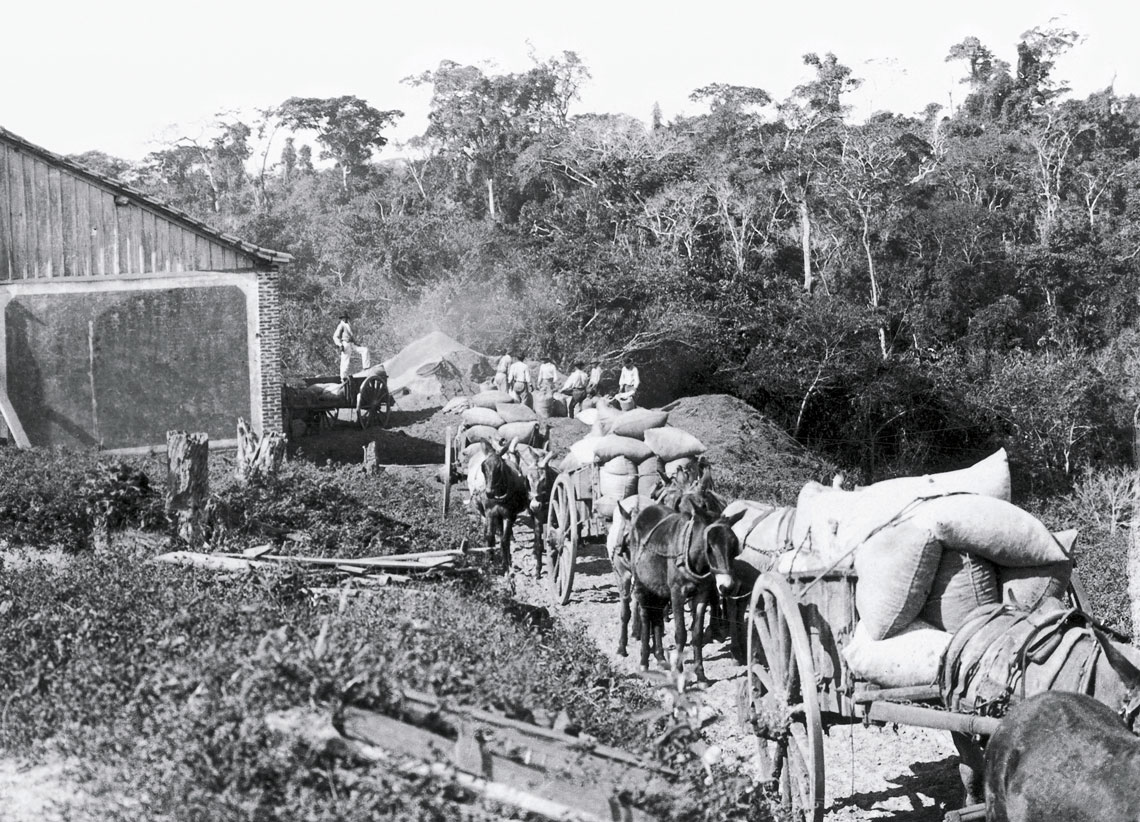 One hundred years ago this year, after several months of planning, 18,172 census agents traveled Brazil’s countryside and cities to collect information about production, inventories, workers, and machinery for the country’s first Census of Agriculture and Industry, dated September 1, 1920. Agents toured the then-643 municipalities in Brazil—today there are 5,570—to compile production data from the nation’s 648,153 farms or “agricultural holdings,” a number equivalent to roughly one-tenth of the 5,073,324 farms registered in the most recent census, in 2017.

As mandated by the Constitution of 1891, the Census of Agriculture was conducted every 10th year up to the census of 1920; the next edition, for 1930, was postponed and later canceled due to a political crisis that prevented president-elect Júlio Prestes (1882–1946) from taking office and ultimately put an end to the Old Republic, ushering Getúlio Vargas (1882–1954) into power. Subsequently, a law enacted in 1965 called for a census to be taken every 5th year, but budget cuts prevented the censuses of 1990, 2000, and 2010 from being commissioned, although similar surveys by the IBGE, such as the Municipal Farm Production Survey, have helped to substitute for the missing data. Censuses of agriculture are an essential input in measuring a country’s production of wealth, and are used by governments and farmers to support planning and decision-making.

The census of 1920, prepared by the General Office for Statistics (DGE), a Federal Government agency created for the first population census, revealed the beginnings of a transition from an agricultural to an industrial economy, a shift that would gain further momentum the following decade. The number of factories in Brazil had grown from 2,983 in 1907 (according to the Brazilian Industry Census, a less comprehensive survey) to 13,336 in 1920; today there are 335,000.

This was also the country’s fourth population census, with the data showing there were 30.6 million people then living in Brazil; in the first census, in 1872, there were 9.9 million—slaves represented 15.2% of the population and the most populous state was Minas Gerais, with about 2 million people. Brazil today has a population of 210 million people. The first known census was taken in China in year 2238 BC; the Egyptians took annual censuses as early as the sixteenth century BC. 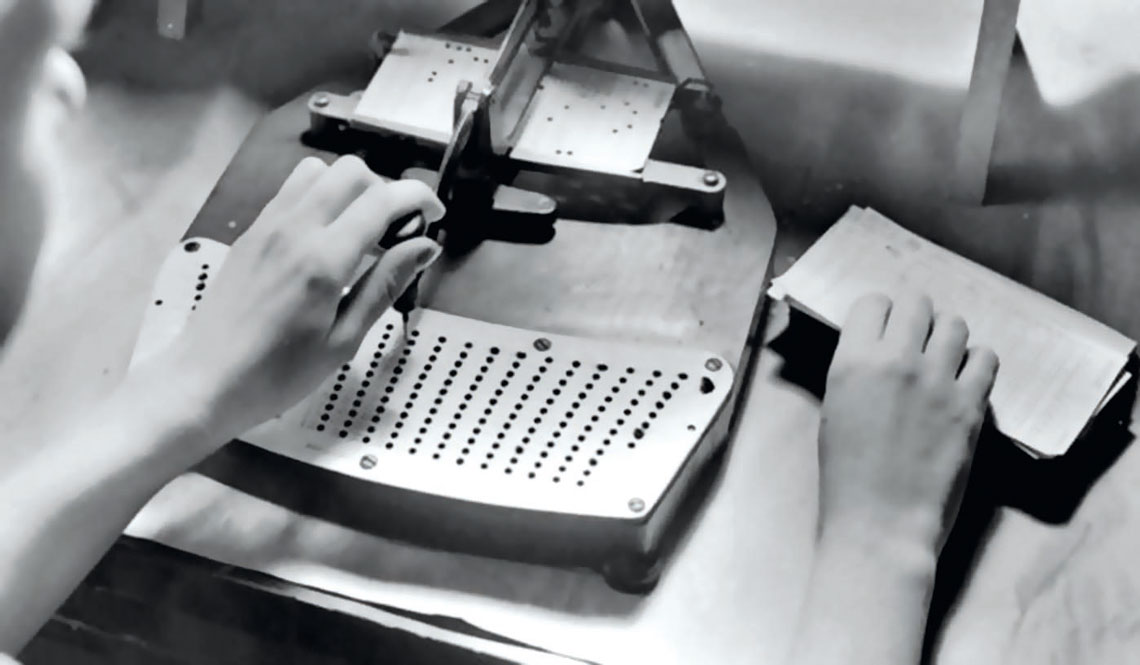 “It is unlikely there will ever again be census of this scale,” says crop scientist Antônio Carlos Florido, who manages the Census of Agriculture at the Brazilian Institute of Geography and Statistics (IBGE), a federal government agency that superseded the DGE in 1936, initially under the name of the National Institute of Statistics. The first Census of Agriculture was unique not only in its sheer size—19 volumes with an average of 600 pages each, which began to be published in 1924—but also because it delved beyond statistics to include detailed chapters on Brazil’s history, geography, climate, and natural wealth.

In the first volume, for example, botanist Frederico Carlos Hoehne (1882–1959), then at Instituto Butantan, examined the history and geographical distribution of the country’s most important crops—sugarcane, wheat, rice, and corn—and described tree species that could be used for urban greening and landscaping.

In another chapter, naturalist Alípio de Miranda Ribeiro (1874–1939), of the Brazilian National Museum, recommended the commercial use of leather from anacondas (Eunectes spp.) and caimans (Caiman spp.), and the domestication of wild ducks (Cairina moschata). “The nutria (Myopotamus coypus) provides felt for hat-making, but is seldom raised on farms, being instead hunted and then eliminated. The progressive disappearance of the animal will inevitably result in the loss of a profitable source of industrial material,” he warned.

In 1920, two states—São Paulo and Minas Gerais—accounted for half (53.3%) of Brazil’s cultivated farmland. Today, the two states with the most cropland are Minas Gerais and Bahia, with São Paulo ranking third in area, but first in crop yield per unit of area. One hundred years ago, corn accounted for 36.9% of Brazil’s cropland, followed by coffee at 33.3%; among permanent crops, coffee ranked first by production value, followed by citrus. 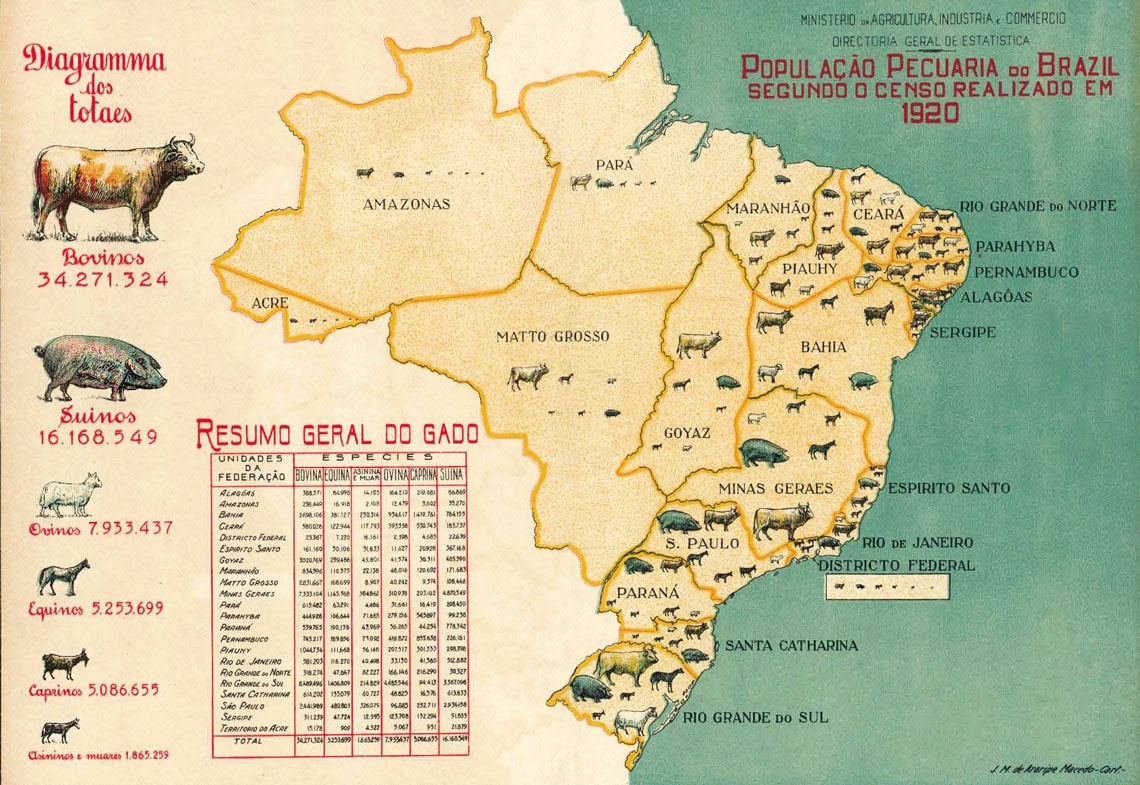 Brazilian agriculture has since diversified and expanded, especially since the 1970s with the creation of the Brazilian Agricultural Research Corporation (EMBRAPA). Soybeans—an annual crop currently occupying 33 million hectares (ha) of land, almost double the area occupied by corn—are now the crop with the highest production value in Brazil, followed by sugarcane, corn, and coffee.

In 1920, large farm properties were even more dominant than they are today. Small properties—those with up to 100 ha of area—accounted for only 9% of cropland, but 71% of the number of farms. Smallholder properties “occur relatively sparsely along the southern coast, thanks to foreign colonization,” the Census reported. In the states of Amazonas, Pará, and Goiás, average property sizes were in excess of 1,000 ha.

“A census of agriculture is not the best tool for assessing a country’s land-ownership structure,” cautions Florido. The Rural Property Register is more useful in evaluating land ownership, which has changed little, he says. In the 2017 Census, the proportion of smallholder properties increased to 27% of cropland and 91% of the total number of farms.

In 1920, the state of São Paulo was Brazil’s largest coffee producer, accounting for 42% of total production, followed by Minas Gerais at 32.1%. “In the 1920s São Paulo State superseded Rio de Janeiro as the country’s leading state for industrial production, modernity, and economic growth,” says economist Wilson Cano, a professor at the University of Campinas (UNICAMP), who authored the book Raízes da concentração industrial em São Paulo (The roots of industrial concentration in São Paulo; Difel, 1977). The state’s industrial production rose from 31.5% of the national total in 1919 to 37.5% in 1929.

São Paulo City, now with its first buildings with elevators, grew from a population of 579,000 in 1919 to about 900,000 at the end of the following decade, of which 160,000 were factory workers, who began organizing themselves into unions. “The city had already become ‘the largest industrial center in Latin America,’ as it would come to be known 20 years later,” wrote Cano in an article published in 2012 in the magazine EconomiA.

Crop scientist Marcelo Souza de Oliveira, survey supervisor for the IBGE Census of Agriculture, notes that Brazil’s agricultural workforce has declined over the past century as a result of mechanization, improved production processes and increased use of technology, as can be seen from a comparison of the 11 agricultural censuses to date. The total number of workers in agriculture increased from 6.13 million in 1920 to a peak of 23.3 million in 1985 before dropping to 15.1 million in 2017. The average number of workers per farm decreased from 9.7 in 1920 to 3 in 2017. 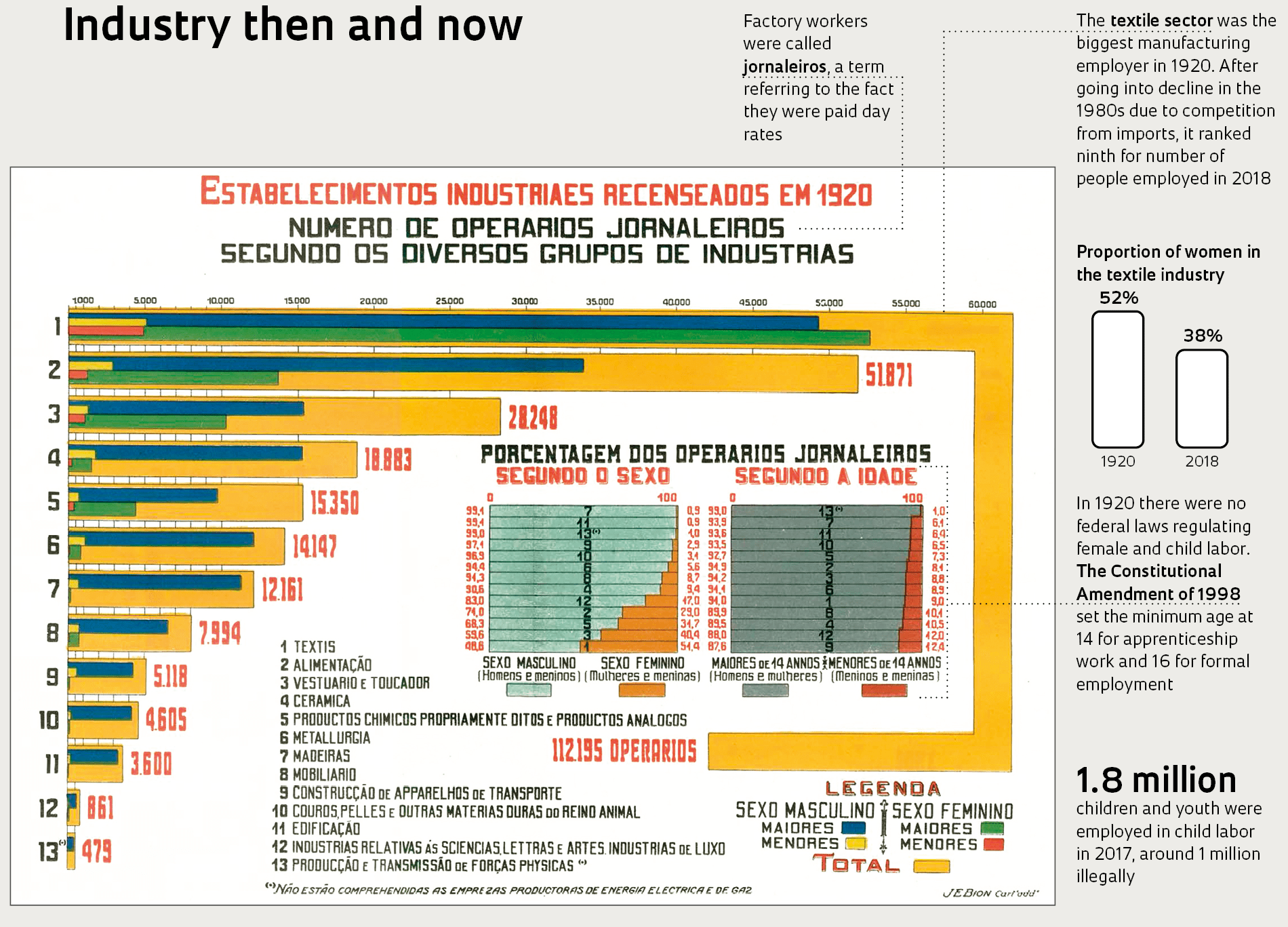 The 1920 Census used 37,589 boxes of questionnaires and maps for the demographic census and 8,265 for the economic census. After being reviewed at regional chapters, the demographic, agrarian, and industrial survey questionnaires began to arrive at the Office for Statistics on November 20, 1920—the last arrived in February 1922. Using 110 card-punching machines provided under an agreement with the Tabulating Machine Company, the predecessor of IBM, a team of 382 people processed the questionnaires into 44 million cards to compute the results.

Census technology has, of course, evolved. “Today,” says Oliveira, “census agents use census apps and navigation systems (GPS) on their smartphones, they can prepare reports online and take photos, and can chat with their supervisors.” The most recent Census of Agriculture, dated September 30, 2017, employed around 28,000 agents as well as data-processing teams. After a five-month data collection stage, the results were released in October 2019. The next Census of Agriculture is scheduled to occur in 2022.