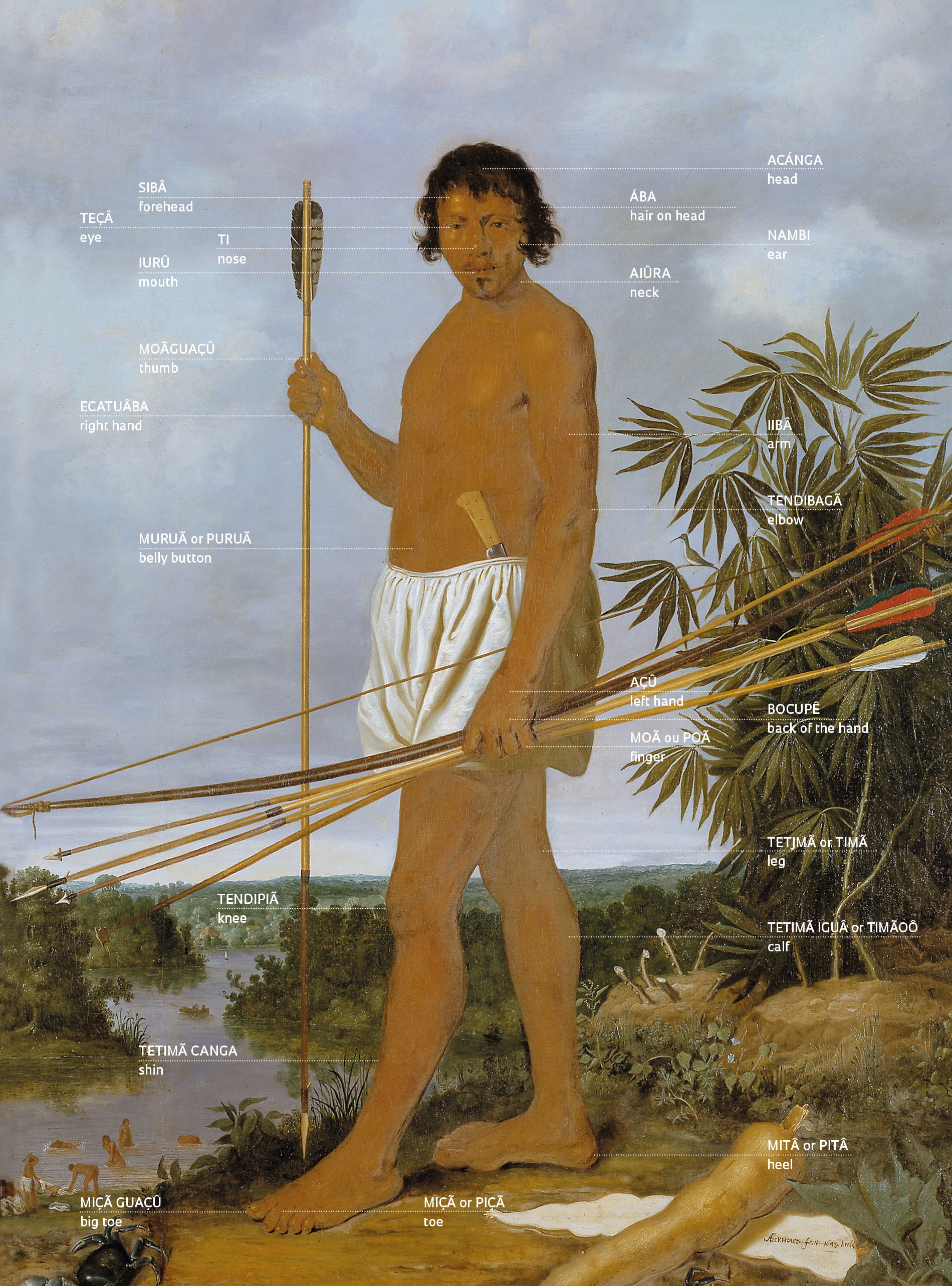 In the language of the Tupi peoples, who lived near the coast when the Portuguese arrived in Brazil, moape means fingernail, while miçãpê describes toenails. Such words, as well as the ones in the illustration, were part of the first Brazilian dictionary of human anatomy, published in Brazil in 1613 with the title Nomes das partes do corpo humano, pella lingua do Brasil (The parts of the human body in the language of Brazil), which recorded how the Tupi saw the human body.

The 25-page document was written by Jesuit priest Pero de Castilho, born in 1572 in the region now occupied by the state of Espírito Santo (the date of his death is uncertain). His target readers were other missionaries who lived in Brazil. Reinforcing the purpose of the first dictionary of the Tupi language, written by the Spanish Jesuit priest José de Anchieta (1534–1597) and published in 1595 as Arte de gramática da língua mais falada na costa do Brasil (The art of grammar of the most widely spoken language on the coast of Brazil), Castilho argued that the terms in his work could be “very necessary for priests occupied in the ministry of hearing confessions” from indigenous people.

“Why would a priest in the confessional need a dictionary?” asks linguist Lídia Almeida Barros. A retired professor at the São Paulo State University (UNESP) in São José do Rio Preto, Barros examined Castilho’s work and, as part of her research in this area, organized the Dicionário de dermatologia (Dictionary of dermatology) (Editora UNESP, 2009, http://bit.ly/DermatoDicio), including 3,697 terms. In her view, a religious appeal could be a way to eliminate any restrictions on the publication of the work—considered to be the first anatomical nomenclature of Brazil and a valuable record of written Portuguese from the seventeenth century.

“During the Middle Ages, it was fobidden to study the human body except when specifically authorized by the Church,” reiterates anatomist Jackson Bittencourt, from the Institute of Biomedical Sciences at the University of São Paulo (ICB-USP). He states that this was why the Italian artist Leonardo da Vinci (1452–1519) dissected bodies in secret and without the knowledge of the pope.

The dictionary is divided into two parts: the first has 257 Tupi entries with corresponding Portuguese terms or definitions, while the second part has 181 Portuguese entries translated into the language of this indigenous group. “It is possible the author did not know the exact terms in Portuguese for the body parts indicated by the indigenous people,” Barros points out. “The Portuguese way of looking at the human body,” she also adds, “was different from that of the indigenous people.”

At that time, there were no Portuguese equivalents for many Tupi terms, which were then explained rather than presented with a synonym in the first part of the dictionary. This is the case for the terms bopitéraiçâba, described as “the lines on the palm of the hand,” today called palmar creases; iurumopi, the equivalent of “outside corners of the mouth,” today known as lip commissures; and moataçâba, which described the space between the two shoulder blades, currently defined as interscapular space. 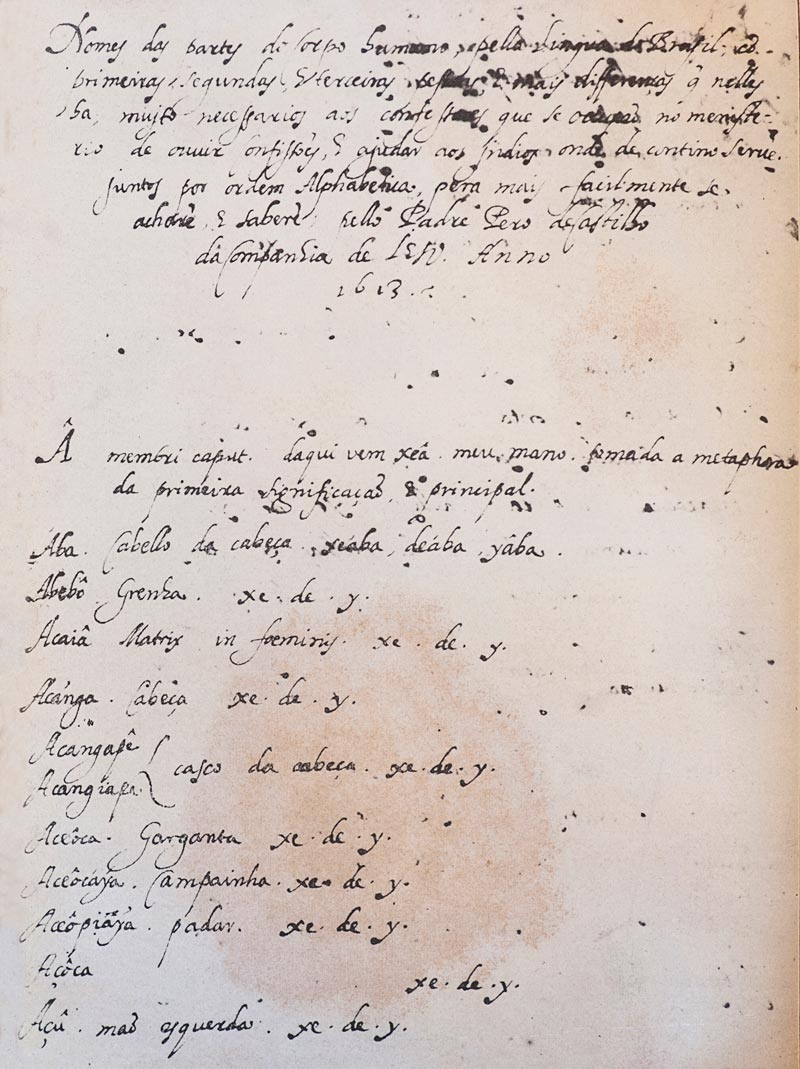 Plínio Marques da Silva Ayrosa (1895–1961), the first professor of Tupi at the University of São Paulo (USP), while examining the dictionary for an annotated edition published in 1937 by the São Paulo State Department of Culture (http://bit.ly/PlinioAyrosa), deduced that the difference in the number of entries between the two parts could have another reason: they could have been written by different people. Castilho himself would have been the author of the first part, while the second part may have been written by an unknown author who did not know all the equivalent terms in Portuguese.

In his analysis, Ayrosa recorded “orthographic divergences in the Portuguese and Tupi expressions, gross errors, inconsistencies, and language variants that were incompatible with the erudition of a man like Pero de Castilho and inadmissible for those with deep knowledge of the language of Brazil.” Ayrosa believes the dictionary must have been written in Bahia or in some other town in the northern region, and then copied—as was common practice at the time—in São Paulo, around 1622. Ayrosa received the manuscript in 1936 from Rubens Borba de Moraes (1899–1986), a book collector and then head of the Library Division of the city of São Paulo, after the city council bought the original from another bibliophile, Félix Pacheco (1879–1935), who acquired it in Paris.

Vesalius
When Castilho’s dictionary began to circulate, the main reference work on human anatomy was De humani corporis fabrica (On the fabric of the human body), written by Belgian physician Andreas Vesalius (1514–1564), from the University of Padua, Italy. Published in Latin in 1543, the 663-page book contains detailed descriptions of internal structures of the human body, illustrated by Italian artists Ticiano Vecelli (1490–1576) and Domenico Campagnola (1500–1564), as well as Vesalius himself. The illustrations were drawn from the observation of the dissection of corpses, “usually of criminals, often done in public spaces,” informs cardiac surgeon Pedro Carlos Piantino Lemos, a professor at the USP School of Medicine.

“Based on previous knowledge from Arabs and Greeks, Vesalius organized and expanded anatomical terminology, with appropriate terms for each part of the human body,” explains Lemos. “Modern anatomy began with him.” A researcher of historical medical texts, Lemos—along with translator Maria Carnevale—organized the publication of Andreas Vesalius de Bruxelas – De humani corporis fabrica. Epitome. Tabulae sex (Ateliê Editorial, UNICAMP and State Press, 2003), including all 96 illustrations and their respective explanations from the original edition.

The founding work of tropical medicine was published in Latin in 1648, in the Netherlands, under the title Historia naturalis Brasiliae (Natural history of Brazil). In this book, Dutch physician Willem Piso (1611–1678)—one of the authors, alongside German naturalist Georg Marcgraf (1610–1644)—describes the main diseases of the time, such as cholera, dysentery, and venereal diseases, as well as the ways to treat them using herbal remedies. Despite being about Brazil, only in 1942 was this book published in Portuguese—almost 300 years after its original publication.

After a time of unbridled creativity—in the late nineteenth century, there were about 50,000 names for 5,000 anatomical structures—a work called Basle Nomina Anatomica was published in 1895. Written in Latin by German anatomists, it was widely adopted by experts and became an international standard. Anatomical terminology has continued to evolve, always in search of terms that are simple, precise, informative, and descriptive.

While each country is free to adopt its own terms, Latin persists as the common language of anatomical terminology, “so that it can be understood in any country,” says Bittencourt. He points out a trend in the adoption of terms that express the shape and function of anatomical structures, as opposed to the name of those who first described them.

In the most recent version of international anatomical terminology, Nomina anatômica de São Paulo (Anatomical naming of São Paulo)—thus named as it was the result of a meeting of international experts held in São Paulo in 1997—the anatomical term “fallopian tube,” named after its discoverer, the Italian anatomist Gabriele Falloppio (1523–1562), was replaced by “uterine tube.” The term “Adam’s apple,” the pharyngeal cartilage protrusion most common in men, has been converted to “laryngeal prominence,” as some women may also have it.