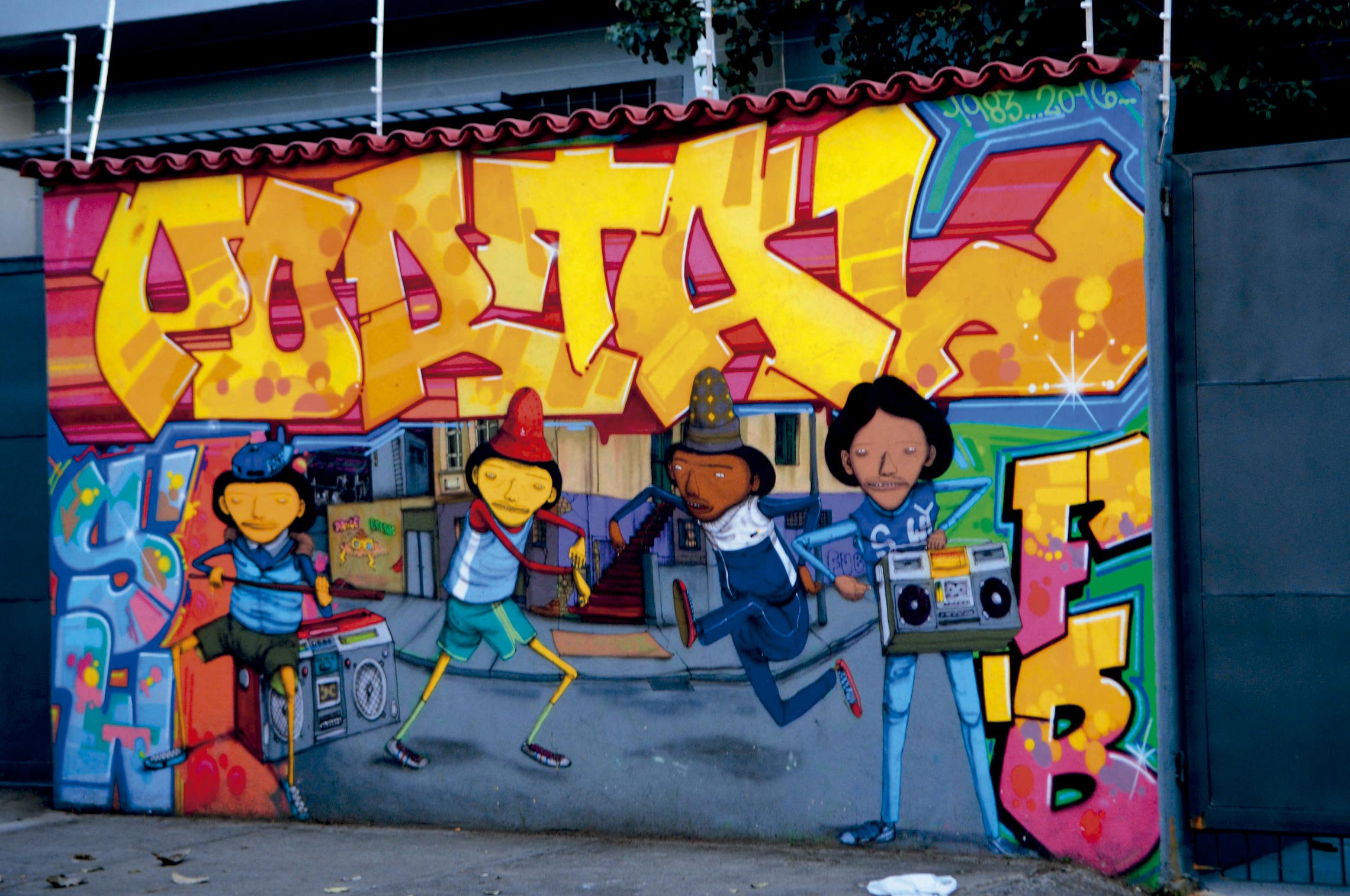 Works by artist duo OSGEMEOS appear in the publication

In 2016, FAPESP invested a total of R$1,137,355,628 in 24,685 research projects. This figure was slightly lower than investments in 2015, which totaled R$1,188,693,702 for the 26,445 projects that were underway at that time. Despite the adverse situation resulting from decreased state tax revenue, which in turn is the product of the country’s economic crisis, 10,480 new projects were contracted, an increase of 4% over 2015. Of these projects, 5,491 were scholarships in Brazil, 1,162 were scholarships abroad, and 3,827 projects supported research. “The Foundation has been able to maintain its commitments and its rhythm of activity in research funding, despite the economic problems that Brazil faced in 2016,” says FAPESP president and physicist José Goldemberg.

The Foundation’s performance over the last year is presented in Relatório de atividades 2016 (2016 Activity Report), which was released in August and is available at fapesp.br/publicacoes, where readers can also find yearly summaries of FAPESP dating back to 1962, when the institution began operations. The cover of the 2016 report features works by the street artists Gustavo and Otavio Pandolfo, better known as OSGEMEOS, and some of these artworks also appear in this article.

The growth in cooperation with the business sector is one of the highlights of the report. The Innovative Research in Small Business program (PIPE) had its best year since it was created in 1997: 228 new proposals were contracted, nearly one per working day, and an investment of R$55.5 million was made (see Pesquisa FAPESP, issue No. 257). In 2015, 159 projects were contracted, and the program’s total disbursement was R$29.9 million. PIPE was the first initiative by a Brazilian agency to provide grant resources for small and medium-sized companies to develop innovations in early stages. “It is a program that has made an enormous contribution to the scientific, technological, and economic development of the state of São Paulo, stimulating the creation of businesses that thrive and generate jobs and wealth,” says physicist Carlos Henrique de Brito Cruz, FAPESP’s scientific director.

The creation of engineering research centers in cooperation with companies was also driven in 2016 by the establishment of the Center for Applied Research in Human Well-Being and Behavior, a partnership between FAPESP, the Natura cosmetics company, the University of São Paulo (USP), the Federal University of São Paulo (UNIFESP), and Mackenzie University. The center, which is based at USP, is dedicated to multidisciplinary studies on human behavior and has received a joint investment of R$40 million over 10 years. The idea is to bring together knowledge, methodologies, and technologies in areas such as experimental psychology and neuroscience, which create well-being indicators for the Brazilian population and help generate innovative products. Andrea Alvares, Natura’s vice president of marketing and innovation, stated that the model is at the forefront of open innovation. “The greater the diversity of the researchers involved, the richer the results will be,” she said at the event launching the center.

The partnership with Natura brings together four other centers established in previous years: two with the pharmaceutical company GSK, one with the carmaker Peugeot-Citroën, and another with the oil and gas company BG. In this model, each R$1 invested by FAPESP will mobilize another R$1 from the partner company and R$2 from the university or research institute that houses the center. Together, these five centers will receive R$259 million in investments.

Another highlight of the report was the growth in support for interdisciplinary research, a field which accounted for 11.5% of Foundation disbursement in 2016, behind life sciences (40.5%) and exact and Earth sciences and engineering (37%) but ahead of human and social sciences (11%). This performance surpasses that of 2015, when 10.4% of the Foundation’s funding went to interdisciplinary projects, and far exceeds that of 2006 (7.78%) or 2013 (3.08%).

FAPESP has also maintained consistent investments in other inducement modalities that fund globally competitive research projects. The thematic projects, which involve bold goals that can justify funding up to five years and often bring together researchers from several institutions, received R$256,266,138 in 2016, compared to R$250,586,553 in 2015. These amounts include resources spent on the projects, as well as assistance and scholarships in the country and abroad that are tied to them. The number of projects contracted was the highest in the last six years, reaching 88, which is six more than in 2015 (see chart). There were 477 thematic projects underway in 2016. The Young Researchers in Emerging Centers program maintained a similar pace: it received R$68.2 million in 2016, also including research grants and scholarships linked to 313 projects that are underway, compared to R$67.3 million in 2015. Fifty-eight of these projects were contracted in the past year. The program finances the formation of centers led by young researchers with doctorates and high potential for up to four years, preferably at institutions that have not yet established traditions in the project area.

The 1989 state constitution provides FAPESP 1% of tax revenues from the state of São Paulo to invest in scientific and technological research. In 2016, the total amount forwarded from the state treasury totaled R$1,057,714,553 and in nominal values exceeded the previous year’s transfer by 1.2%. When the value is corrected according to the Broad National Consumer Price Index (IPCA), there was a decrease of 5% compared to 2015. These funds from the treasury were responsible for 78.7% of the Foundation’s revenue. The 2016 disbursement was supplemented with R$215,154,402 which came from agreements and partnerships with other agencies, institutions, and companies, as well as R$71,328,947 in revenue from the Foundation itself, which maintains profitable assets to complement the resources received from the treasury. In nominal terms, this revenue was 6% lower in 2016 than in 2015.

Walls in São Paulo painted by the street artistsEduardo Cesar

The reach of this investment can be seen from a number of different perspectives. One of these is the division of resources by FAPESP: 39.5% of disbursements went to scholarship grants in Brazil and abroad; 34.1% to regular research grants; 14.3% to special programs, such as those supporting young researchers and research in
eScience; and 12.1% to technological innovation programs.

The number researchers abroad who obtained scholarships for post-doctoral studies in Brazil financed by FAPESP dropped from 123 in 2015 to 93 in 2016. However, the proportion of grants awarded to researchers from other countries remained stable, with 19% of all post-doctoral grants in Brazil, slightly below the level of 2015 (21%) but exceeding that of the five previous years, which ranged from 13% to 18%. The grant beneficiaries, who are generally foreign, worked in exact and Earth sciences (36%), engineering (26%), human sciences (26%), and applied social sciences (25%).

Another way to analyze the Foundation’s investments distinguishes the research support objectives. Using this criterion, we see that 53% of the funds were directed toward applied studies. This item includes research grants and scholarships in areas such as agronomy and veterinary medicine, engineering, and health, which almost always result in applications. This is in addition to programs that stimulate innovation in universities and companies and some special Foundation programs. Another 39% of funds were invested in supporting the advancement of know-ledge through programs that comprise human resources and stimulate academic research, including grants and scholarships. Finally, 8% of funds supported research infrastructure, enabling the recovery, modernization, and purchase of equipment for laboratories, expansion of library collections in teaching and research institutions, and ensuring high-speed Internet access for researchers.

Investments in the Multi-User Equipment program (EMU) for the purchase of high-value equipment that can be made available to a large number of researchers totaled R$37.5 million in 2016, including 134 projects that were linked to regular research grants, thematic projects, and the Young Researchers program. This amount also includes four specific EMU projects, which cost R$1.3 million.

Throughout 2016, there were co-operation agreements between FAPESP and 94 organizations; 28 of them were signed that year. Of all the development agencies and academic institutions with which new agreements were signed, only one was Brazilian: the National Institute for Space Research (INPE). The other 24 agreements were signed with foreign institutions, including 7 in the United States; 3 each in the United Kingdom and Australia; 2 each in Canada, France, and China; and 1 each in the Netherlands, Italy, Norway, Chile, and with a multinational agency. Among these organizations, three were companies: Statoil (Norway), Koppert (the Netherlands) and IBM (the United States). In 2016, two scientific symposia were held in the FAPESP Week series, which seeks to stimulate scientific collaborations between researchers from São Paulo and other countries; one of these was held in March in the United States, and another in November in Uruguay.