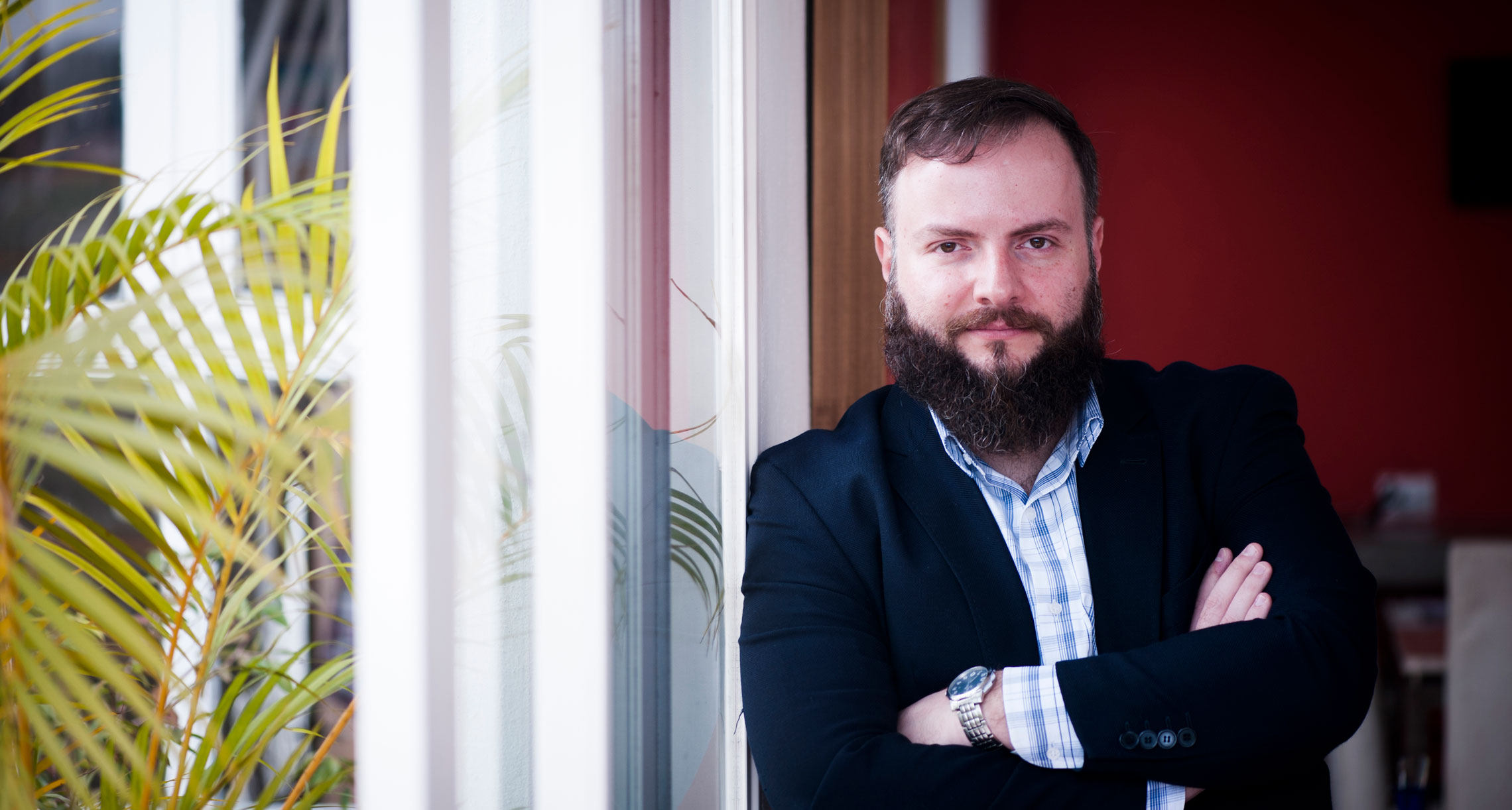 The Internet of Things (IoT) was still moving at a crawl in Brazil at the end of the last decade. At that moment three recently graduated engineers joined forces to create a startup aimed at monitoring objects at a distance, such as computer equipment in datacenters, using radio frequency identification (RFID) technology. “This was one of the first technologies to form the IoT ecosystem,” says telecoms engineer Antonio Carlos Rossini Jr., who cofounded RFIdeas in 2010.

The company’s trajectory was meteoric. In its early years it was supported by a São Paulo incubator, received resources from a FAPESP program for small business innovation, and was awarded a multi-million-real contribution from a startup stimulus fund, the São Paulo Innovation Fund. In 2015, the entrepreneurs invested in a new IoT-based solution for remotely controlling the quality of food, medicines, and environments. Today, there are 1,500 of these remote sensors in operation.

In the following interview, Rossini, 34, who complemented his engineering education with specializations in finance and marketing, talks about the challenges of IoT in Brazil and how betting on innovation defined the startup’s direction, which led to the adoption of the name Nexxto, inspired by the expression “next to your things.”

How do you see the growth of the Internet of Things in Brazil?
In addition to large companies, a variety of startups are emerging to work on IoT. There are good opportunities in Industry 4.0, Agriculture 4.0, and smart buildings, among other sectors. Many applications can be created by using sensing devices and artificial intelligence in local area networks. Expanding these to regional or national networks is a challenge. For these applications, which require a broader range of connectivity, the Achilles heel is the telecommunications infrastructure. In big cities, cell phone coverage works well, but you only need to get out a bit to see the signal become intermittent or disappear. If we think about IoT applications in the field or those that require mobility, such as monitoring a truck in real time, we run into problems. To do this, we need a network that’s more robust, reliable, and has greater coverage.

Launched in 2010, the company has 250,000 items being monitored by its Artis and Ativis solutions, in addition to 1,500 active sensors on its Nexxto IoT platform

Is that the only obstacle?
No. Another bottleneck is the standardization of connectivity that allows devices—the so-called “things”—to communicate amongst themselves. The wireless technology known as Wi-Fi is so widespread because it has a defined standard. Phones and computers talk in the same language using Wi-Fi, the IEEE 802.11 standard. Today, several wireless technologies, including LoRa, SigFox and NBIoT, compete to see which will become the IoT standard. Without this definition of a standard, the spread of IoT remains limited because network elements from different manufacturers, such as sensors, routers, and repeaters, don’t always communicate with each other. A third hurdle is the cost of hardware components. The price will go down when we reach scale, but to get to scale there have to be more sales. How do we solve this at Nexxto? We design our hardware to be simple, robust, and low cost.

What exactly does Nexxto do?
When it was created in 2010, few people understood the concept of IoT. The company was created to operate using RFID technology, electronic radiofrequency identification tags. Our original name was RFIdeas. RFID tags are small sensors that, when installed on computers, miscellaneous machines, and other high value items, monitor them. This solution, called Artis, prevents theft and improves efficiency in asset-management processes by up to 80%, according to our customers.

At that time, did Brazil have companies that offered RFID technology?
Yes, there were companies that created projects to meet specific customer demands. We adopted another strategy, that of creating off-the-shelf products to meet obvious market needs. We found there was a large demand for tracking objects in datacenters, such as servers, data storage, and network switches. It’s not easy to control all this with spreadsheets and manual processes. There are financial and security risks, since the devices are subject to loss. But the biggest problem is losing the data they hold. One of our customers in California handles 70% of all internet traffic through its servers. Imagine if one of those servers is lost. That’s why we’ve created a business plan focused on using RFID technology to track datacenter assets.

Did you set up RFIdeas alone?
No, it was created with a colleague who studied with me at Poli, [the Polytechnic School of the University of São Paulo], electronics engineer Lucas Almeida. Since graduation we’d thought about becoming entrepreneurs. After we completed our business plan, at the end of 2010, we were incubated at CIETEC [the Center for Innovation, Entrepreneurship and Technology, an incubator at University City]. There we found out about PIPE [the Technological Innovation in Small Businesses program], at FAPESP. We submitted a project to build an Artis prototype and were approved. Since neither Lucas nor I knew how to develop software professionally, we invited a colleague of Lucas’s, electrical engineer Matheus Costa, who has a degree from UNICAMP [the University of Campinas] to be our partner. And he came onboard.

How much was invested in the venture?
During the first year we survived on our own resources, but when we were chosen for the first phase of PIPE we received R$125,000. With that money, we hired a scholarship student and bought the material to build Artis version zero. In 2012 we got our first client, Alog Datacenters, which was acquired that same year by the sector’s global leader, Equinix. A short time later we were approved for the second phase of PIPE and received R$500,000 to continue developing our RFID solution.

How did the company name change to Nexxto come about?
In 2013 we took part in a Getulio Vargas Foundation [FGV] competition with more than a thousand other startups. We placed second and were chosen as the best technology company. The award winners received consulting hours with SP Ventures, manager of the São Paulo Innovation Fund, whose goal is to prepare startups for receiving investments. In early 2014, we visited Silicon Valley in California to learn more about entrepreneurship and better understand the IoT ecosystem. When we got back, we thought: since we’ve already had success with an asset-tracking solution, why not create a sensing platform for remote monitoring any kind of variable? Our conversations with SP Ventures developed further and in early 2015 we received R$3 million from the São Paulo Innovation Fund. With this money we were able to continue with the RFID business and then diversify our portfolio by building the Nexxto platform. To move the company image away from RFID technology we’ve changed its name to Nexxto, whose inspiration comes from the English phrase “next to your things,” or “close to your things.”

What is the Nexxto platform?
It’s an IoT solution designed for remote sensing in real time. Using sensors smaller than a matchbox, which are battery operated and communicate wirelessly, we collect a variety of environmental information, such as temperature and humidity, and whether doors are open or closed. After processing this data, we generate information for our customers in order to increase the quality of their operations, reduce waste, and automate routines. We have invested heavily in R&D [research and development] to achieve this IoT solution.

Where is this technology applied?
In three main sectors. In the food sector, Nexxto monitors food in refrigerators and walk-in freezers, and refrigerated shelving for industry, distribution companies, supermarkets, and restaurants. In the health sector, it monitors medicines and vaccines that require refrigeration, and in the facilities sector it’s used for monitoring critical environments. Some companies have equipment rooms with expensive equipment that generate a lot of heat. If the air conditioning temperature isn’t correct, they might fail.

How big is Nexxto?
In 2017, our revenue grew by 40% and was in the R$5 million range—I’d rather not say the exact amount. This year, we should bill between R$5 million and R$10 million. In addition to Artis, which is focused on datacenter devices, we have another RFID solution, Ativis, focused on asset management in general. Together they account for 60% of revenues, while the Nexxto platform generates 40%. We have more than 50 clients, including internet portal UOL, Danone, the Raia Drogasil pharmacy network, the Rabobank banking firm and the B3 [formerly the São Paulo Stock Exchange]. Outside of Brazil, we’ve provided our Artis solution to the National Telecommunications Agency of Uruguay, and there’s the potential we’ll be deploying our technology to all the Equinix datacenters around the world. Recently a Spanish company approached us seeking to represent the Nexxto platform in Europe.

How important is innovation in Nexxto’s trajectory?
We develop state-of-the-art technologies based on leading methodologies, and use global references when building hardware and software, and when designing the usability of our solutions. Our products are innovative for what they’re designed to do. We automate processes that the customers used to do manually and we’ve been able to reduce equipment pilfering and the loss of merchandise.

How is the company’s R&D sector structured?
We allocate 30% of our resources to R&D. We have six employees dedicated to this area, four of them with master’s or doctoral degrees. They’re researchers with educations in computer science, telecommunications and electronic systems engineering, and computer engineering. We’re a small company with 15 people, but we should be over 20 by the end of the year. This is a feature of technology businesses. When you develop a high-value-added product that works well, you don’t need to have a lot of people on the team. The most important factor is having qualified professionals.

What do you project for the future?
Today, we have more than 250,000 items monitored in real time by the Artis and Ativis solutions, in addition to 1,500 active sensors on the Nexxto platform. This solution is a living product that needs to incorporate innovations that meet the needs of customers and the market in order to evolve. On our development roadmap we have new sensors for monitoring other variables, and we’re always implementing new functionalities. We want to expand the market in which we operate and enter other sectors.