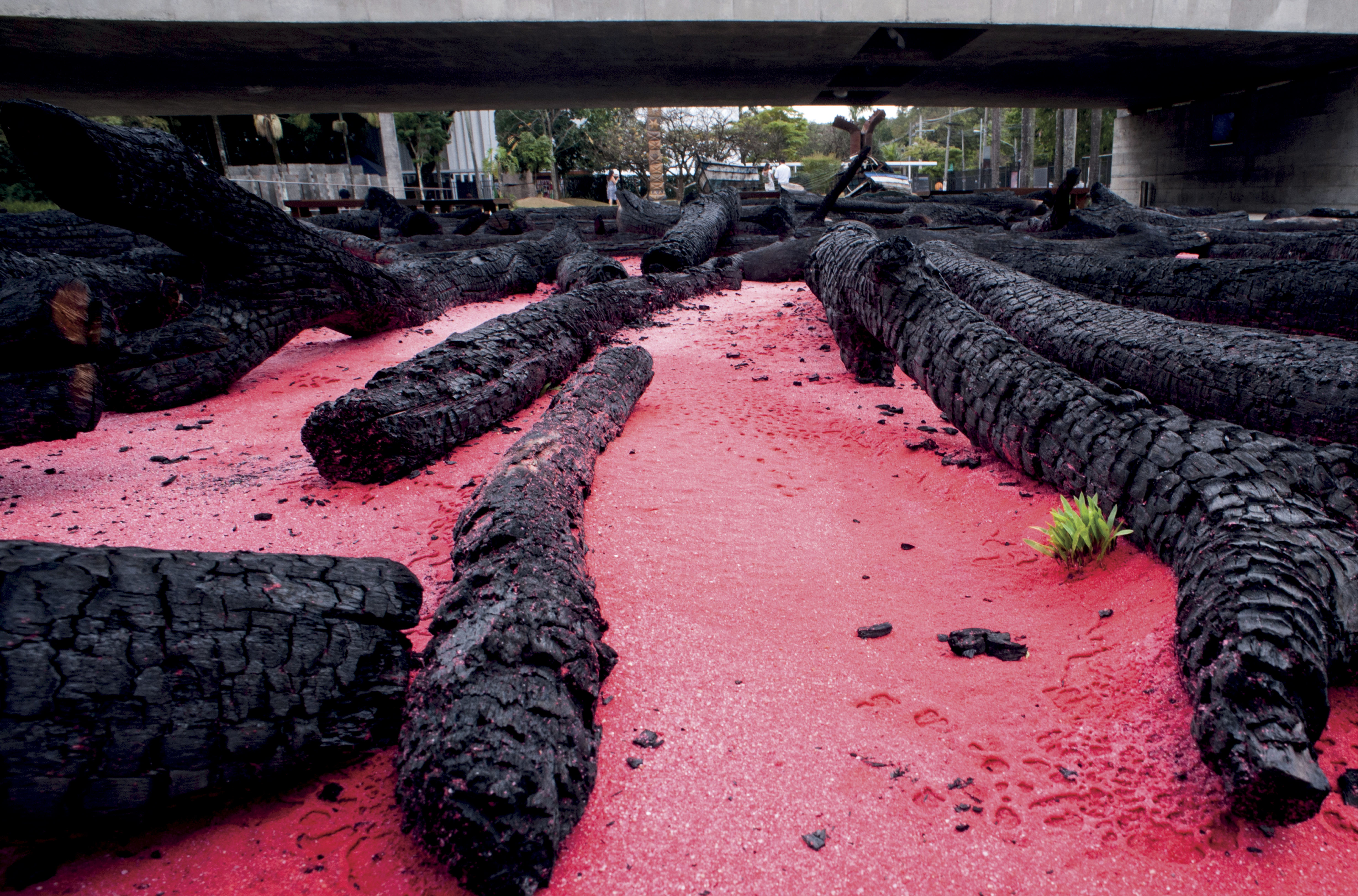 In an innovative attempt to expand the reach of scientific discovery, biologist Lúcia Lohmann invited a team of professionals with a different perspective to join her on an expedition to the Amazon in 2016. While she and her research group explored the Negro and Branco rivers collecting samples to study the evolutionary history of certain plant species, Portuguese artist Gabriela Albergaria, filmmaker Gustavo Almeida, and photographer Léo Ramos Chaves, a member of the Pesquisa FAPESP team, took their own records. A subsequent meeting with Cauê Alves, curator of the Brazilian Museum of Sculpture and Ecology (MUBE) in São Paulo, resulted in a new exhibition inaugurated at the museum on May 12, curated by Alves and Lohmann. Amazonia: Os novos viajantes (Amazonia: The new travelers) runs until July 29 and traces a path between nineteenth-century explorers and the travelers of today. It also harks back to the museum’s initial vocation, which was dedicated to ecology in parallel with art.

The difference between the old books filled with dazzling illustrations by naturalists and the scientific articles written by Lohmann, a professor at the Institute of Biosciences of the University of São Paulo (IB-USP), and her colleagues seems enormous. But explorers like Germans Karl Friedrich Philipp von Martius (1794–1868) and Johann Baptist von Spix (1781–1826), for example, laid the foundations for a lot of scientific research by surveying plant species and drawing maps, among other contributions. “Today we need GPS just to get to the end of our own street,” jokes Alves. “But this exhibition includes a map of the Amazon drawn by Martius and Spix, who had no technological resources, which is incredibly accurate given what we know today.”

Lohmann and Alves have created a diverse contemporary artistic collection on Amazonia, from mid-twentieth-century works to pieces made especially for the show, such as the burned logs on red sand by artist Fernando Limberger. Over time, seeds hidden in the sand germinate and the green leaves of brachiaria grass emerge, a plant known for its ability to regrow in devastated areas. “Alberto Baraya’s greenhouse of plastic plants reminds us that much of what we preserve becomes artificial,” says Lohmann. For her, it provokes an essential feeling of discomfort.

Gabriela Albergaria, who was part of the expedition, submitted two pieces to the exhibition. One is a palette of colors the artist assembled while accompanying the scientists on their field work, trying to adapt to the dense forest. “The aim was to find creeper species that grow in the treetops. That’s why we went when the Negro and Branco rivers were flooded,” she says, showing an awareness of the scientific aspects and processes that inspired her work. “The trips were anything but contemplative, and at first I had no understanding of how to distinguish one plant from another in such a sea of green leaves and plants; but in the end I was able to identify some of them myself.”

She set up a makeshift studio on the boat’s kitchen table, where she cataloged colors and materials, while the researchers organized their samples in an improvised laboratory on the second floor. “Preparing plants to extract DNA is very different to creating a herbarium, where the material is dried and carefully pressed between sheets of newspaper to maintain the shape. When studying DNA and anatomy, shape is completely irrelevant—all you need is small pieces stored in tea bags or in a vial of liquid, almost like alchemy. There was a feeling of fantasy about the process, for me. It was enchanting,” Albergaria recalls. “Traveling with these artists made us think differently about our work and its meaning,” says Lohmann. “They questioned us in a way that we are not used to.”

While the video produced by Gustavo Almeida during the trip is projected on a wall, visitors stroll through a world of science. “Despite the Amazon rainforest’s old age, we are finding that many of the species now living in this biome are actually more recent than previously thought,” says Lohmann. The numerous and complex results of this research, published in scientific articles, are not integrated into the exhibition.

In another parallel between art and science, bright and delicate watercolor flowers painted by Margaret Mee (1909–1988) in the mid-twentieth century are displayed alongside detailed botanical illustrations in ink by Barbara Alongi and Klei Sousa, documenting the species described by Lohmann and her students. “The need for representation is very important in all scientific studies. This is an essential point of communication between art and science,” reflects Albergaria. Her second piece in the exhibition is a tree composed of cubes of increasing—or decreasing—size. “It is geometric, rational, contained,” describes Cauê Alves. “It represents art and science, the organic and the inorganic.”

Lohmann believes that the exhibition draws public attention to the Amazon. At the same time, researchers have realized that they need to take bolder actions if they want their work to get noticed by nonspecialists. Alves celebrates the previously rare presence of biologists among the museum’s visitors. “It is an opportunity to show the museum as a place for research too,” he says.

The exhibition recalls the original vocation of the museum, which was dedicated to ecology in parallel with art

Reestablishing the museum’s initial purpose—the land was granted by the city hall in 1986 on the condition that it would be used for a museum of sculpture and ecology—also enhances the value of ​​the building, designed by architect Paulo Mendes da Rocha, and its gardens, designed by landscape architect Roberto Burle Marx. “The roof collects water and stores it in a cistern that supplies the water features,” says Alves. It is an example of the museum’s concern for the environment, which the curator also intends to highlight. “It is the most pressing problem we have to solve in the world right now.”