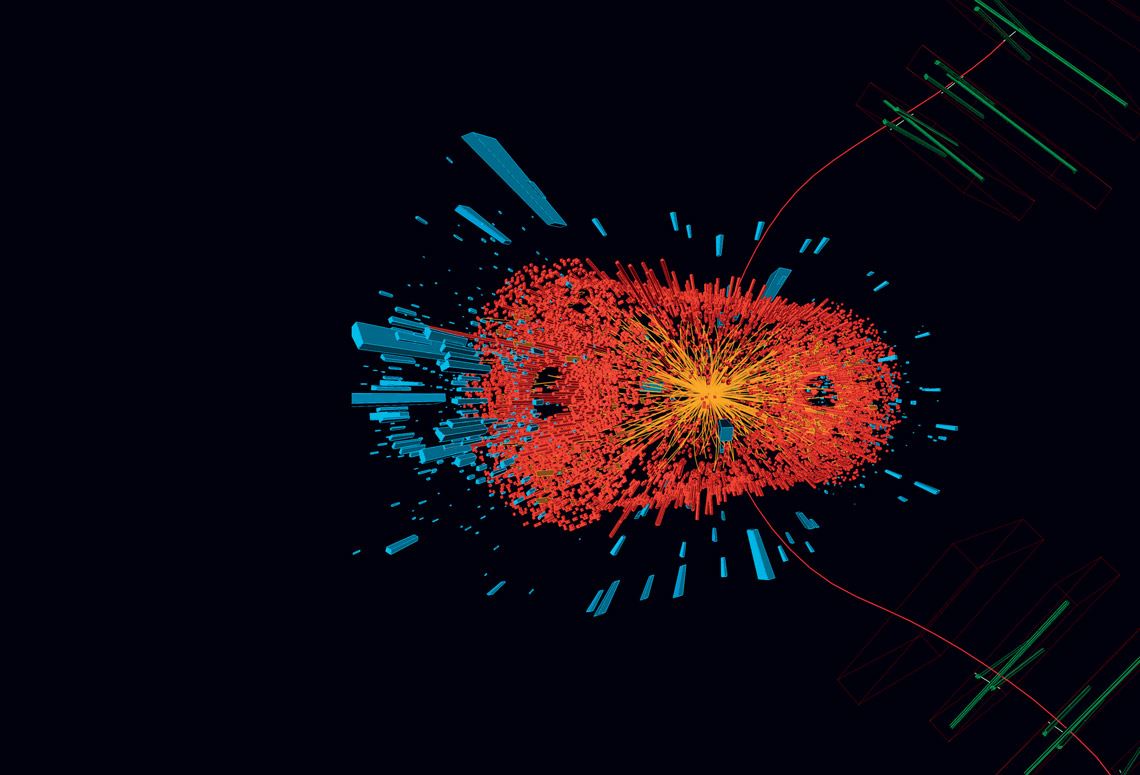 A particle collision in the CERN collider in Geneva, in 2011. The two red lines are muons, one of Tiomno’s research interests. The orange lines are tracks formed by other particles in the collision

Born in Rio de Janeiro to Russian Jewish immigrants, Jayme Tiomno (1920–2011) left for the US in 1948 after completing a degree in physics in the National School of Philosophy at the former University of Brazil, now the Federal University of Rio de Janeiro (UFRJ), and studying for a year in a graduate program at the University of São Paulo (USP). He rode a Panair plane that was flying to New York to change an engine with an expired warranty, and the few passengers allowed on board were prepared to jump with a parachute at any moment if needed.

After an uneventful flight, his work in the US was equally successful: his supervisor at Princeton, American physicist John Wheeler (1911–2008), was already familiar with the work of two other prominent Brazilian names in particle physics: Mario Schenberg (1914–1990) and José Leite Lopes (1918–2006), who had studied there before him. At Princeton, Tiomno met some of the great physicists of the day, names like Hungarian Eugene Wigner (1902–1995) and Chinese Chen Ning Yang, who later won a Nobel Prize in Physics. 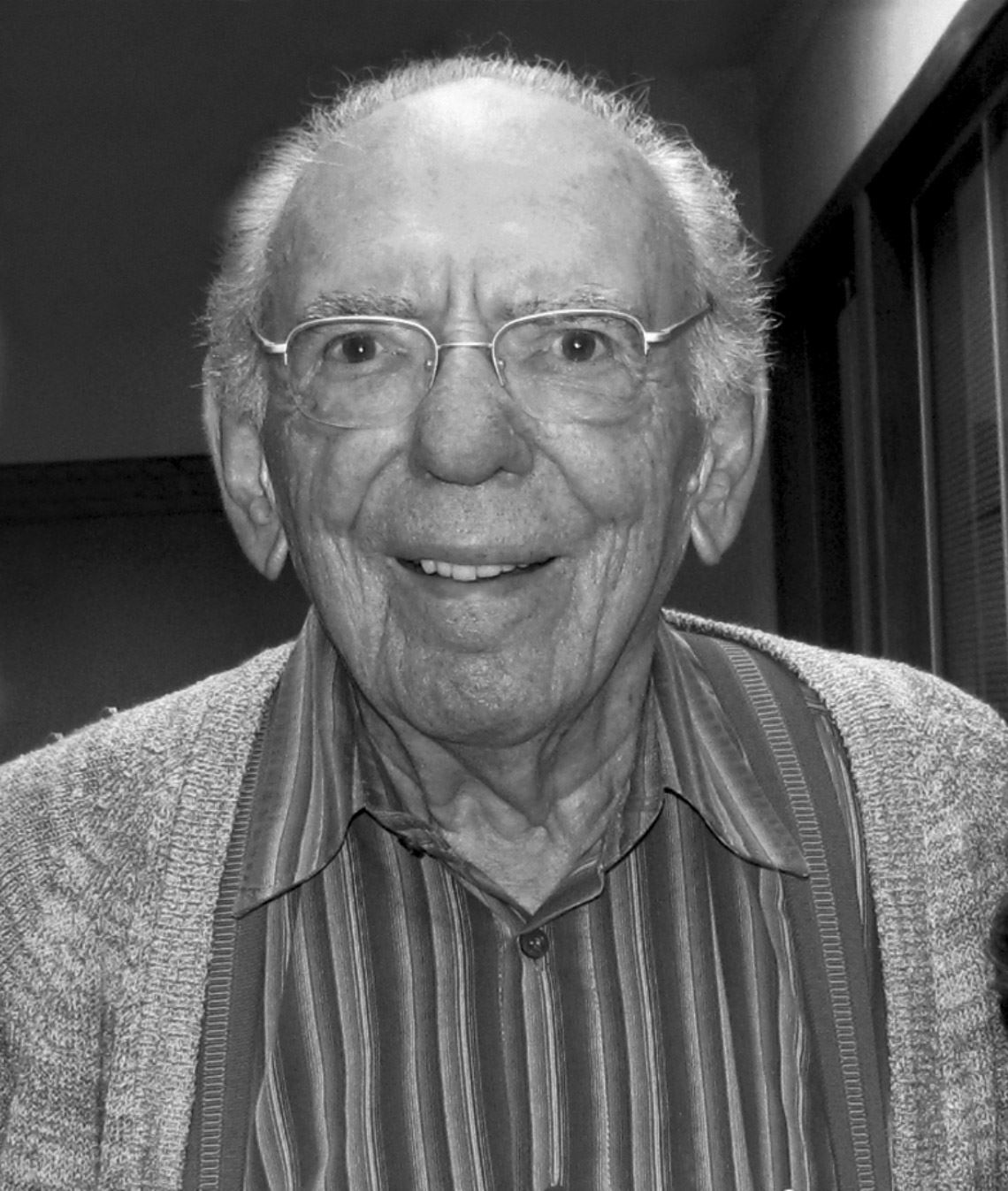 It was there that he did some of his most important work: he proposed the universality of Fermi interaction, now known as the weak interaction—the force that governs interaction among particles in an atom’s nucleus.

In the late 1940s, a decades-long belief that there was no more to an atom than three particles—neutrons, protons, and electrons—had been challenged by experiments with cosmic rays that revealed other elementary particles with different masses, charges, and properties. Three types of decay were now known: the first was beta decay, consisting of the breakdown of a neutron and proton respectively into a proton, electron, and antineutrino, and into a neutron, positron, and electron neutrino; the second involved the decay of pions—particles with a mean lifetime of 26 nanoseconds, codiscovered by fellow Brazilian physicist César Lattes (1924–2005)—into muons and muon neutrinos; and the third was the decay of a particle with a mass 200 times greater than that of the electron—the muon—into an electron, an electron neutrino, and a muon neutrino.

“At that time,” explains physicist Ignacio Bediaga, of the Brazilian Center for Physics Research (CBPF), “the three types of decay were thought to be independent phenomena, with different origins.” Tiomno proposed unifying the three reactions in the atom’s nucleus and demonstrated mathematically that they resulted from interactions with the weak force, mediated—as would be experimentally demonstrated only in 1983—by charged W boson particles. The proposed universality of weak interactions was illustrated through a diagram, known as the Tiomno-Wheeler triangle, in a 1949 article in Reviews of Modern Physics, giving visual substance to what was then a novel idea. 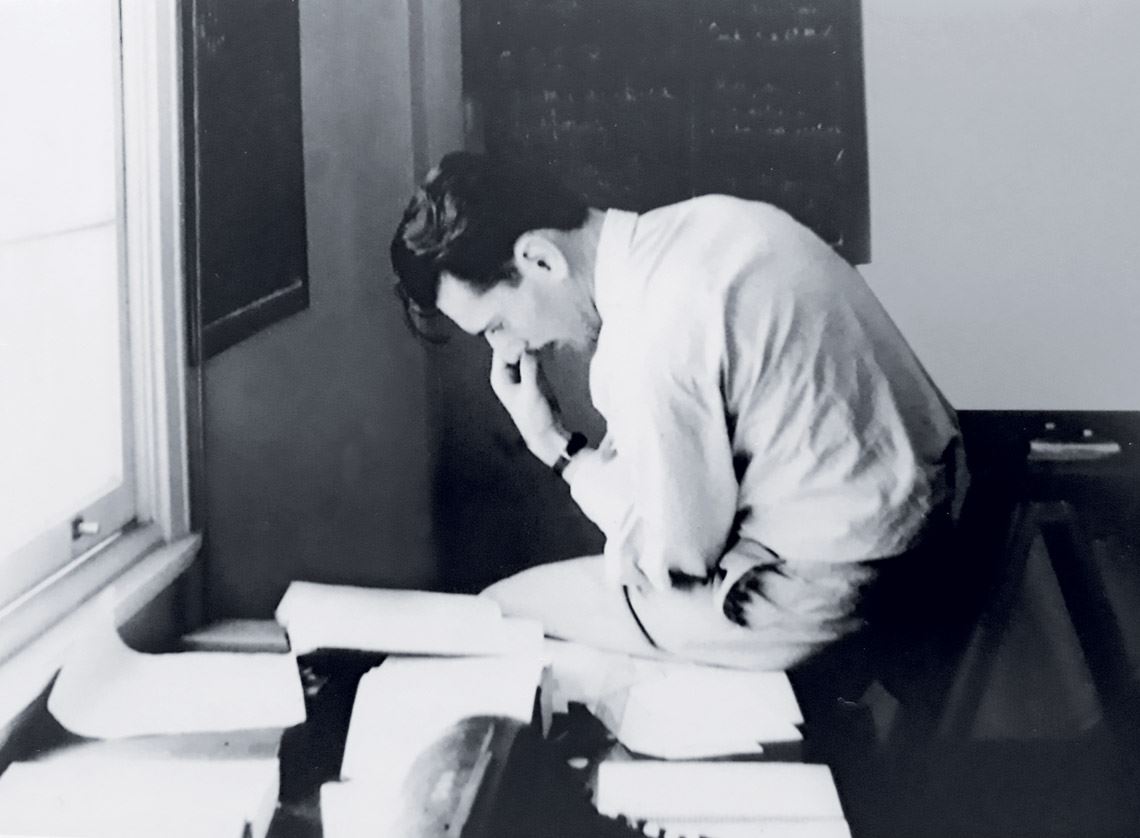 “The triangle synthesized what was then the state of the art of particle physics and is now a well-established concept,” says physicist and historian of science Olival Freire Junior, of the Federal University of Bahia (UFBA). Years later, when authorship of the diagram was lost to another scientist, Wheeler complained and attempted to set the record straight for his former student.

Italian physicist Giorgio Salvini (1920–2015) recalled those days at Princeton in 1993 when he visited CBPF and asked Bediaga, who had done his doctorate in Italy, to arrange for him to speak to Tiomno. He was unable to, as his former colleague was ill. “He was the only one kind enough to complete his exercises in 15 minutes and then pass them on to us to copy, unlike like our American classmates,” says Salvini, who served as Minister of Science in Italy from 1995 to 1996. 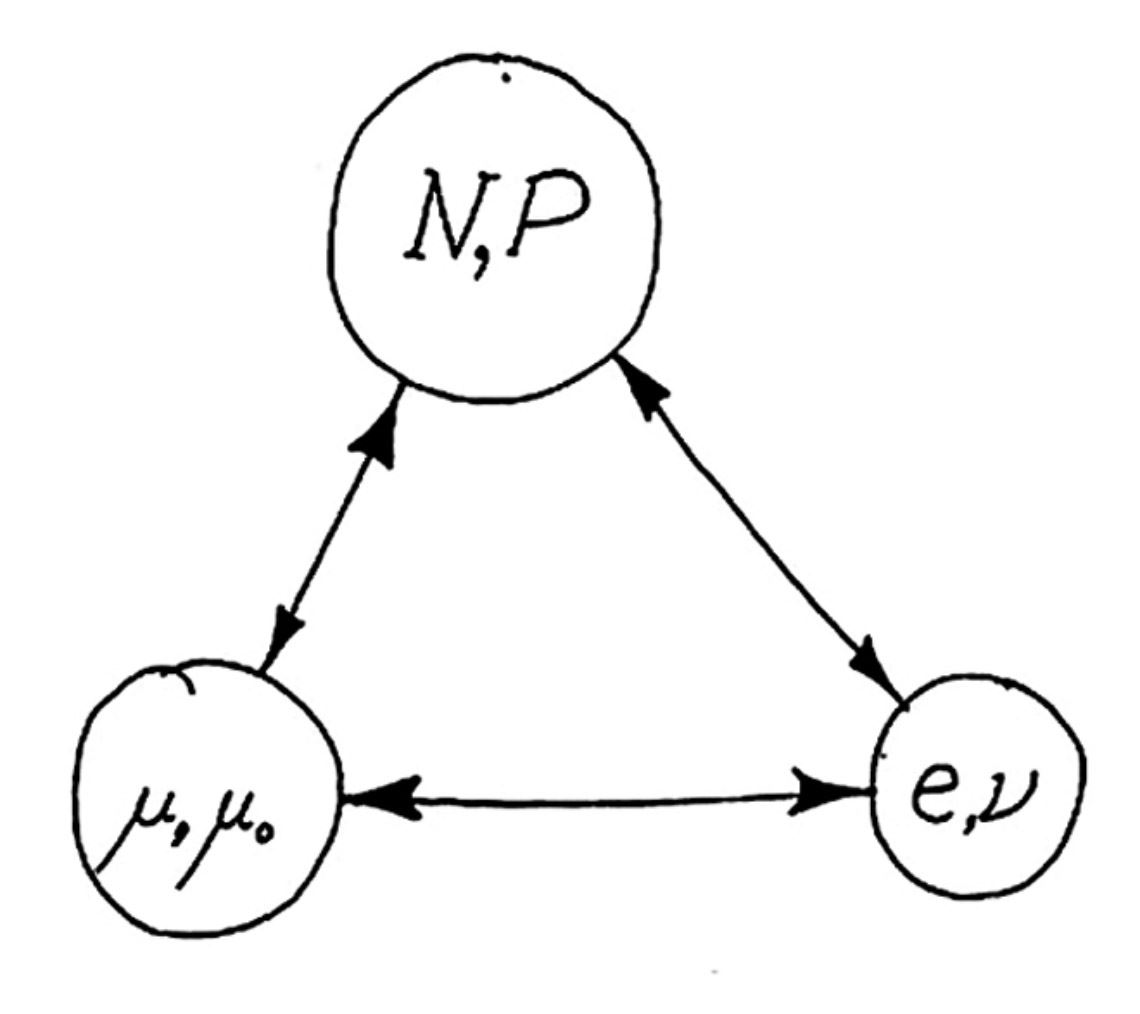 A diagram drawn by Wheeler in 1949 to illustrate how he and Tiomno had unified the transformations between three pairs of particles: neutron and proton (N and P); electron (e) and electron neutrino (v); and negative muon (μ) and muon neutrino (μ0)Jayme Tiomno Archives

At CBPF
After returning to Brazil in 1950, Tiomno worked as a research assistant at USP and became reacquainted with experimental physicist Elisa Frota Pessoa (née Elisa Esther Habbema de Maia, 1921–2018). Elisa, whom he would later marry, was then married to biologist Oswaldo Frota Pessoa (1917–2010). After 18 months, he resigned from USP to return to Rio, where he worked as a part-time professor at the National School of Philosophy.

In 1952 he joined Elisa, now his wife, at CBPF, a research center created two years prior with his support. In an interview he gave in 1977 to researchers at Fundação Getulio Vargas, when he also recounted his memorable flight to the US, Tiomno recalled how CBPF had been created because, “other than in São Paulo, all Brazilian universities made it as difficult as possible to do research,” especially for those who had studied abroad. 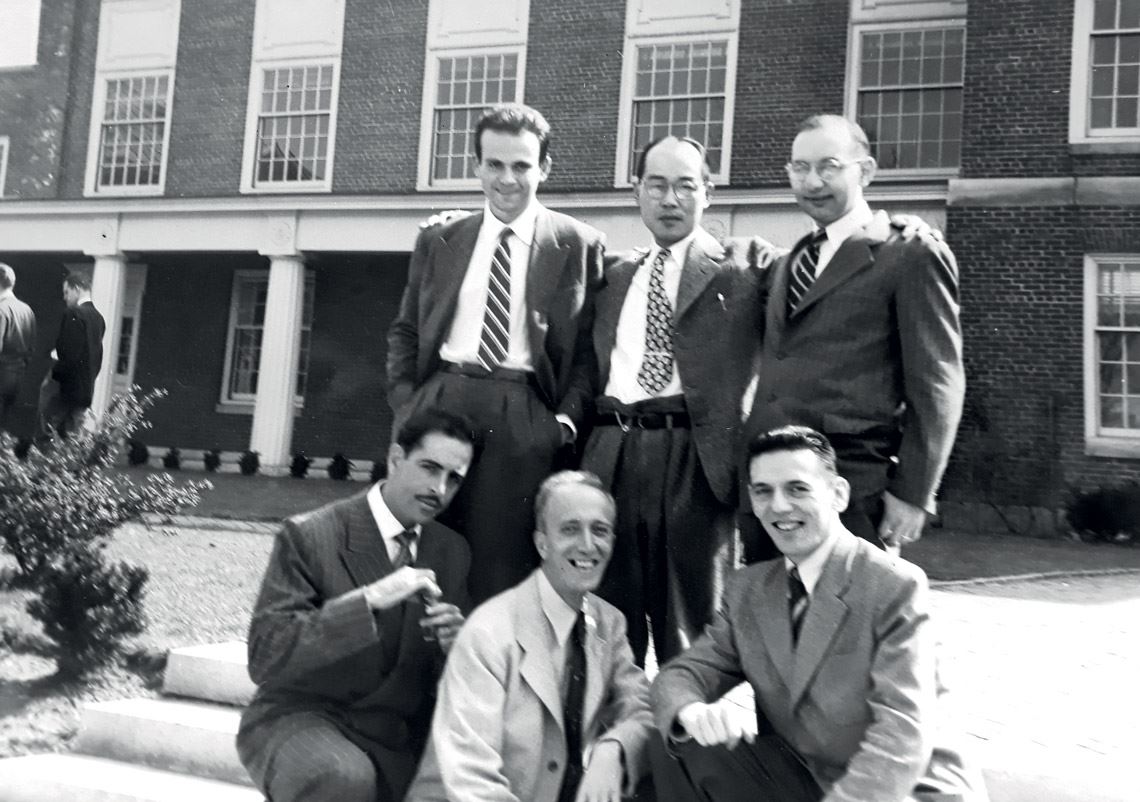 During his time at CBPF, Tiomno explored another idea in his doctoral thesis: a mathematical equation that could explain weak interactions. He selected one of two possible approaches, but it was the one he left aside that would later prove consistent with experiments using particle accelerators. In 2003, Freire heard Tiomno admit that he had neglected to consider research into pion decay that had been done by Elisa and physicist Neusa Margem at CBPF, which would have shown that the second mathematical approach was the right one. “He chose to use more recent findings from another researcher, but which ultimately proved wrong,” says science historian Alfredo Tolmasquim of the Museum of Tomorrow, in Rio de Janeiro. Tolmasquim, who is Tiomno’s nephew, hopes to publish a biography titled Jayme Tiomno: A life for physics, a life for Brazil (Springer) in June, coauthored with German physicist William Brewer, a retired researcher at the Free University of Berlin who lived for 10 years with Tiomno’s stepdaughter, Sônia.

“Tiomno is part of a generation of Brazilian researchers—including Lattes, Schenberg, and Leite Lopes—who collaborated with the world’s greatest scientists and established a scientific approach that made Brazilian physics research world class,” says Bediaga, who coauthored five scientific articles with Tiomno. “He encouraged his students to try new and bold ideas, and then to work hard to pursue them.” 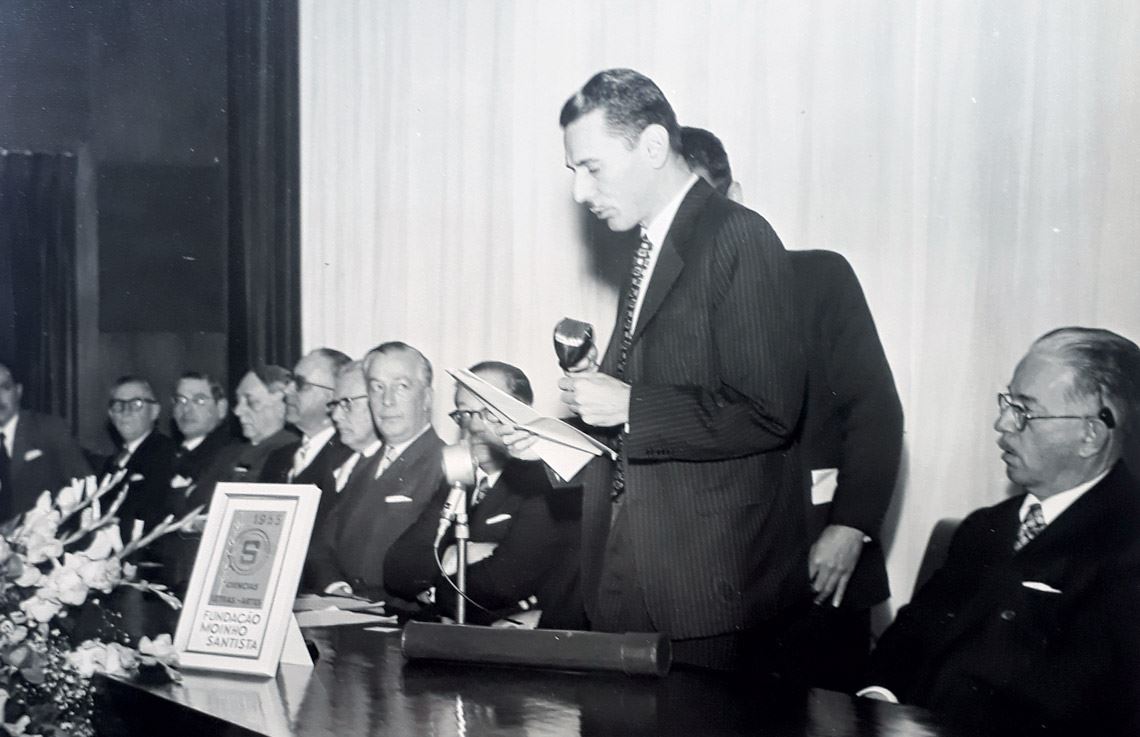 In 1960, at a conference on high-energy physics in the US, Tiomno proposed a new type of meson resulting from the decay of another particle, the baryon. This was the first study on the transformation of a particle into other more stable particles, known as resonance. Soon after, the K* (890) vector meson, with a mass close to what he had suggested, was discovered in an experiment using an accelerator at the University of California at Berkeley. But the particle proposed by Tiomno would be closer to the kappa (800) meson, identified in 2002, says Bediaga.

Back to Princeton
In 1965 Tiomno moved to the University of Brasília (UnB), but soon resigned along with more than 220 professors who refused to accept the military government’s intervention in universities, spending a year at the International Center for Theoretical Physics, in Trieste, Italy. In 1968, after returning to Brazil and taking a post at USP, he and Elisa were included in a list of university professors deemed to be leftist sympathizers. The following year, with the promulgation of Institutional Act No. 5, they were ousted from the university with many other professors, including Schenberg and Leite Lopes and sociologists Florestan Fernandes (1920–1995) and Fernando Henrique Cardoso. 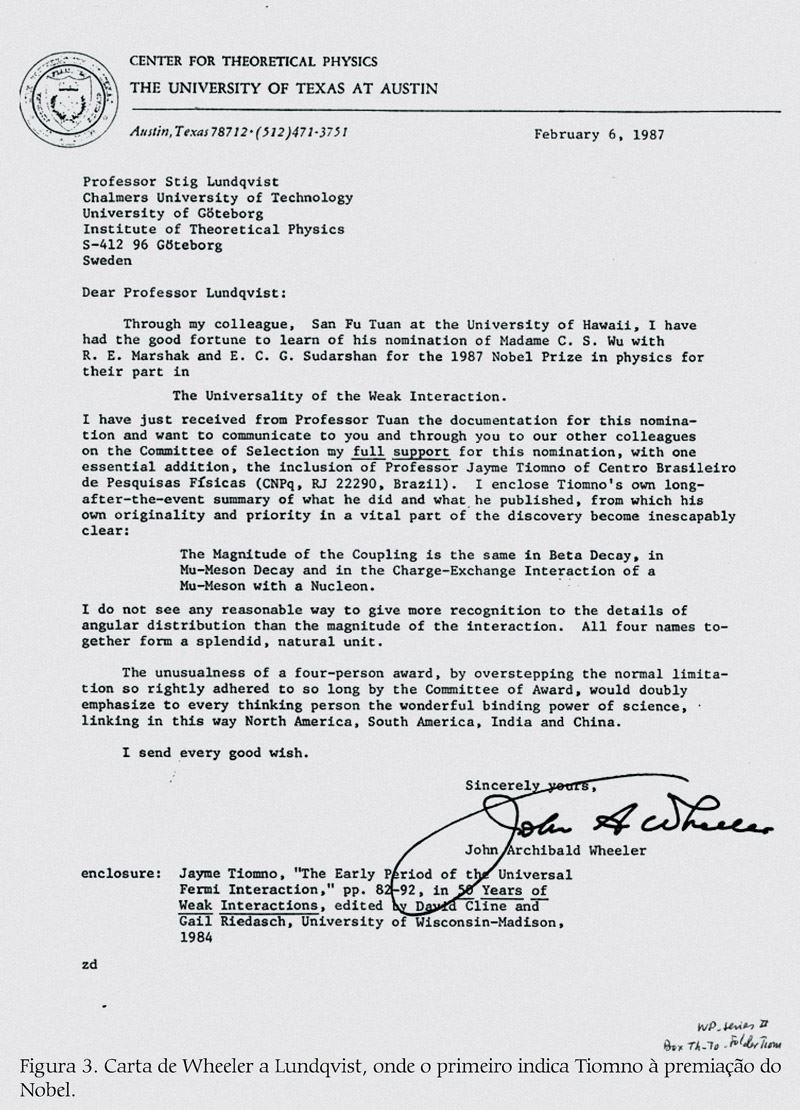 “Nobody understood why he had been put on the list,” says Tolmasquim. “Tiomno was critical of the way the 1968 university reform had been implemented, but he was very reserved about it and was never politically active.” For the historian, the most likely explanation is that old accusations of his involvement with a group of communists—which were later refuted—had been dug up and used against him by political repression agencies in São Paulo.

Tiomno returned to CBPF but was also dismissed. This sent him into a deep depression that prevented him from considering invitations to work in the US. One of these invitations came from Wheeler, whose insistence finally persuaded Tiomno and his wife to go to Princeton, in mid-1971. They returned in 1972 to work at the Pontifical Catholic University of Rio de Janeiro (PUC-RJ). Following the adoption of the 1979 Amnesty Law, Tiomno returned with Elisa to CBPF. 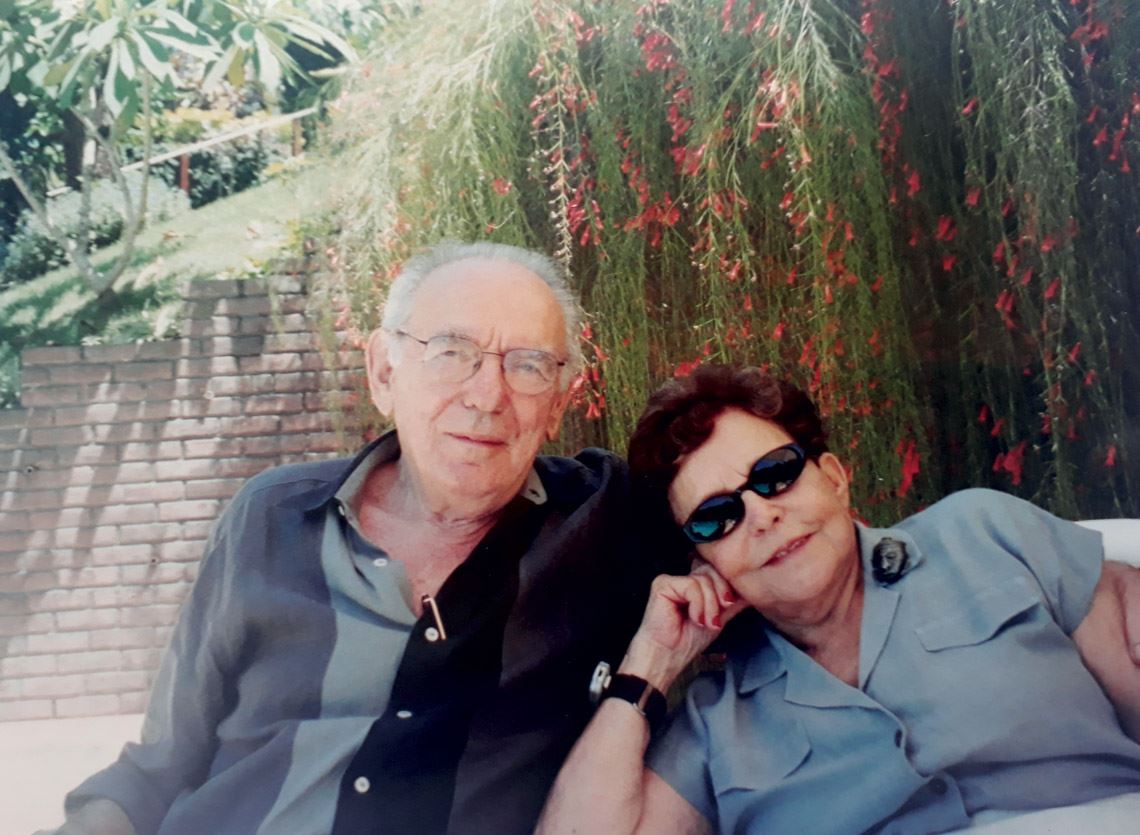 Jayme Tiomno ArchivesAfter his second spell at Princeton, he turned his attention to cosmology. “It was a field that still had little experimental data available and was more speculative than theoretical physics,” says Felipe Tovar Falciano of CBPF. In the 1980s, he actively supported Brazilian researchers in finding opportunities to collaborate on international projects as he and other physicists had done decades prior until they were forced to abandon their activities during the military regime (1964–1985).

Tiomno lived in Rio until his death at 90 years of age. Many physicists who studied under him or were his colleagues now work at CBPF and at universities in Brazil and abroad.