A prototype driverless tractor being tested at the Jacto R&D Center: the technology is set to become mainstream in the near future

Visitors to Fazenda Santo Antônio, a property owned by Suzano Papel e Celulose in Anhembi, São Paulo, are likely to chance across a strange-looking vehicle, with no cabin or driver, navigating the alleys between rows of eucalyptus trees. The Jacto Autonomous Vehicle (JAV), as it is called, is a concept robotic pesticide sprayer with which Máquinas Agrícolas Jacto—a 70-year-old company based in Pompeia, a small town 474 kilometers from the city of São Paulo—hopes to make its name among the global pioneers of driverless farming machinery, a technology that is set to become commonplace in the coming years.

The JAV is fitted with cameras and a GPS positioning system for navigation, as well as a plethora of sensors developed by EMBRAPA Instrumentação and the São Carlos School of Engineering of the University of São Paulo (EESC-USP). In addition to fuel, hydraulic oil level, and pesticide tank level sensors, an optical vegetation index sensor provides the ability to sense plant color and identify areas with nutritional deficiencies or that are infected by pests and diseases. A weather monitoring system indicates whether, for example, pesticide spraying could be affected by rain or strong wind.

Jacto has been developing its autonomous vehicle platform since 2008 and unveiled the current generation—its second—in 2013 during an agriculture trade show in Ribeirão Preto. Research & Development Director Sergio Sartori Junior says that driverless farming technology is not yet mature enough for commercial applications. “We need to improve the sensors so the technology is more reliable under adverse conditions,” he says. Positioning technologies, such as GPS, also need to be improved to prevent glitches in areas covered by tree canopy, for example.

The concept is that autonomous vehicles will work together as a fleet on the same field, exchanging information with each other about farm tasks and being monitored at a distance by a single operator. Driverless farming will also require better rural connectivity, with a denser distribution of telecommunications antennas.

Despite these constraints, Jacto plans to produce an experimental batch of three to five JAVs in 2019, equipped with a new generation of sensors for an additional season of controlled testing with other customers. If this second round of testing is successful, the company will consider a commercial launch of the vehicle, but only for applications in which it has been proven to perform well.

Sergio Sartori Júnior says that work on developing the JAV is also helping Jacto to improve products already on the market, such as its Uniport sprayer platform. In 2017, the company launched Omni 700, a new version of its suite of solutions for precision agriculture—a concept that describes the use of technology to manage crop production with greater precision and accuracy. The system is the first in the world to offer an operation repeater with which the operator can record the parameters used for spraying on each section of a field. 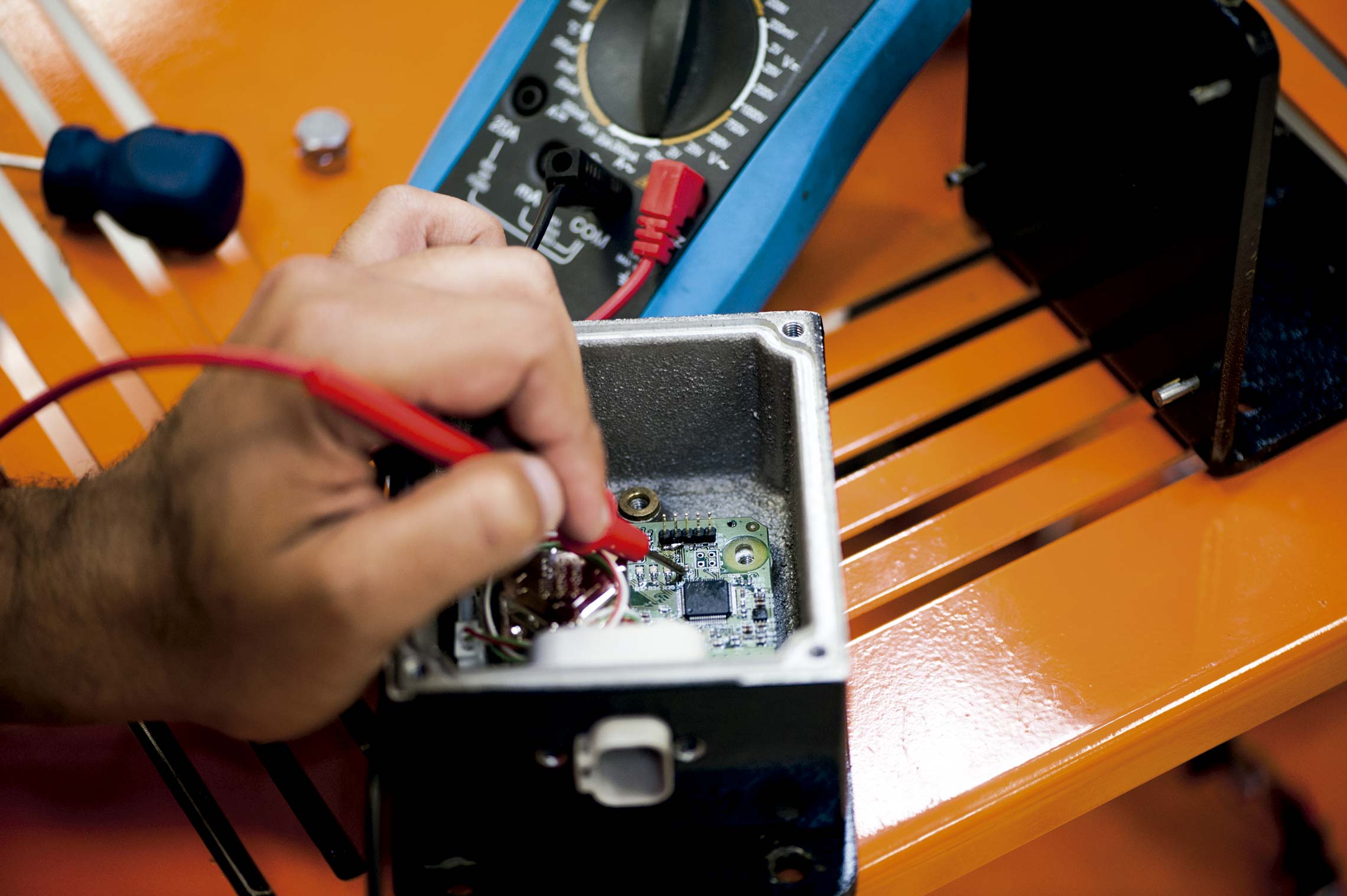 The previous version already incorporated functionality such as autopilot and lightbar systems, which help operators apply pesticides in parallel strips with no gaps or overlaps. The system allows pesticide spray nozzles, which are spaced 35 centimeters apart on a boom up to 36 meters wide, to be individually actuated to target infected plants. Diseased plants are identified by a vegetative index sensor.

Jacto’s automation expertise also supported the development and 2017 launch of its Uniport 5030 NPK fertilizer spreader. The new product features functionality such as Precision Way, a system for precisely dosing fertilizer at each application point; border control, which prevents fertilizer from being thrown beyond the boundary of the field; and automatic section control, which lays out adjacent application sections to avoid overlaps. Automated systems can reduce fertilizer consumption by up to 15%.

CEO Fernando Gonçalves Neto says that technological development in the farming machinery industry is currently being driven by two fundamental principles: eco-efficiency and productivity. The more precise the machinery, the less farmers spend on farm inputs, and the lesser the environmental impacts and health effects on farm workers, who suffer less chemical exposure. 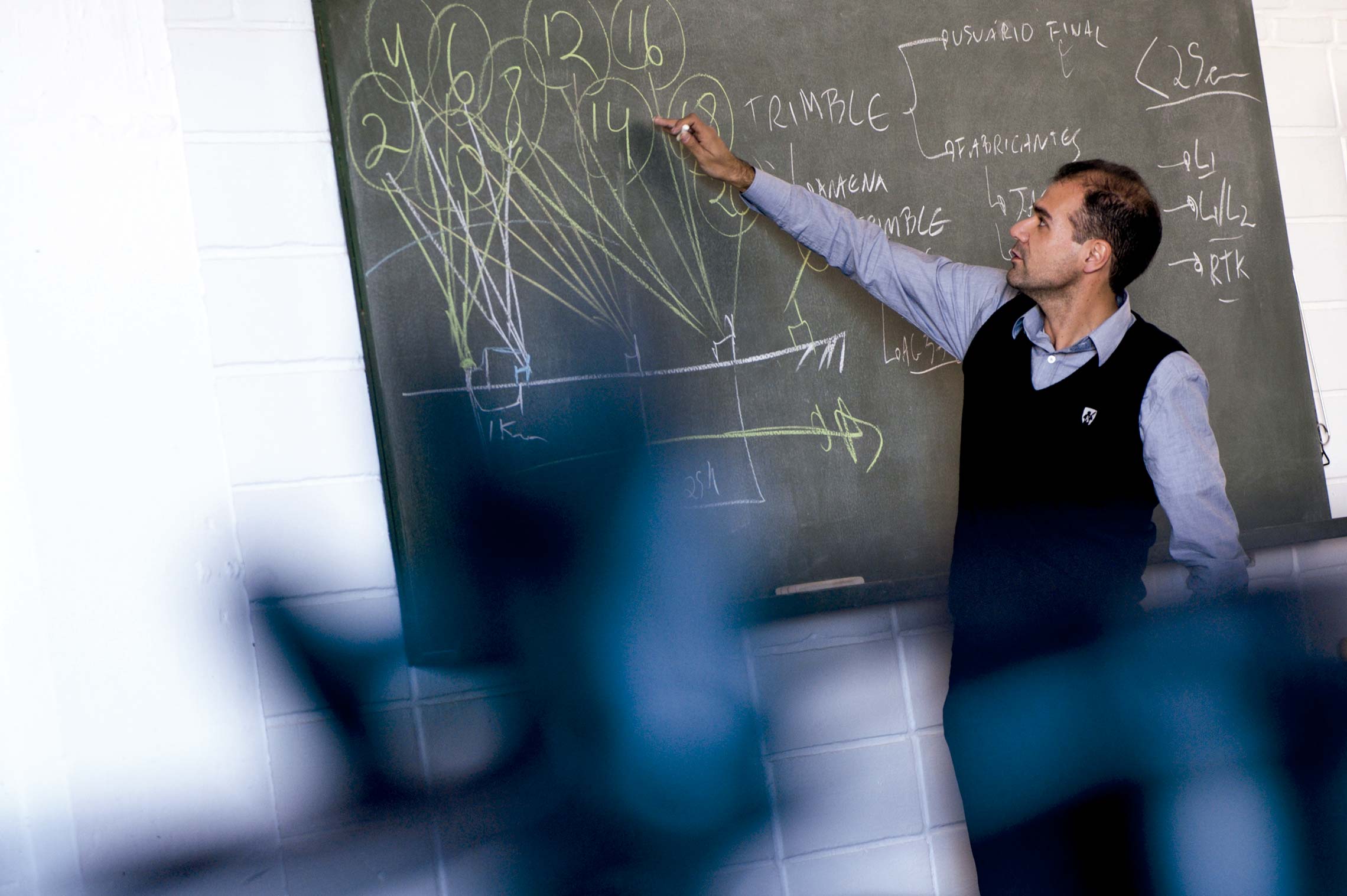 Agribusiness professionals
Cultivating professionals with the skills to manage technology and an interest in working in agriculture has become a challenge, one that Jacto has worked to address. Company executives convinced Centro Paula Souza (CPS), the organization managing Brazil’s School of Technology (FATEC) network, to set up a campus in Pompeia, a small town with a population of just 21,000, despite the network’s policy of opening schools only in cities with a population greater than 120,000. The school was created under a private-public partnership agreement—the first to be concluded by CPS—with Fundação Shunji Nishimura de Tecnologia, a trust established to manage the estate of Jacto’s founder.

FATEC Pompeia has 30 professors and two major programs. The first, mechanization in precision farming, trains professionals (agricultural production engineers) to work with emerging technologies in agriculture. Electrical engineer Tsen Chung Kang, a professor who codeveloped the program, explains that students learn both theory and practice at a facility with equipment worth R$3.5 million, supplied by 93 partner companies. “Students learn about the entire value chain, from seeds and fertilizers, through planting and harvesting equipment, to ERP software and distribution logistics,” he says. The three-year program has trained more than 500 engineers so far. “Almost all students are employed by the time they complete the program and will work at companies or farms using these technologies in their production processes,” he says.

When the program was created in 2012, only one other school—in Oklahoma, USA—offered a comparable program, which was subsequently discontinued. Two years ago, another equivalent program was created in South Dakota. FATEC was recently visited by delegates from Mexico and China keen to learn about the teaching methodology. Kang is also part of the group that developed the Big Data in Agribusiness program in 2017, the only program of its kind anywhere in the world. The goal, according to Kang, is to meet market demand for professionals with the skills to handle the vast amount of information generated by onboard technologies and integrate that information with the data used by processing companies downstream. The three-year program is currently educating its third class. 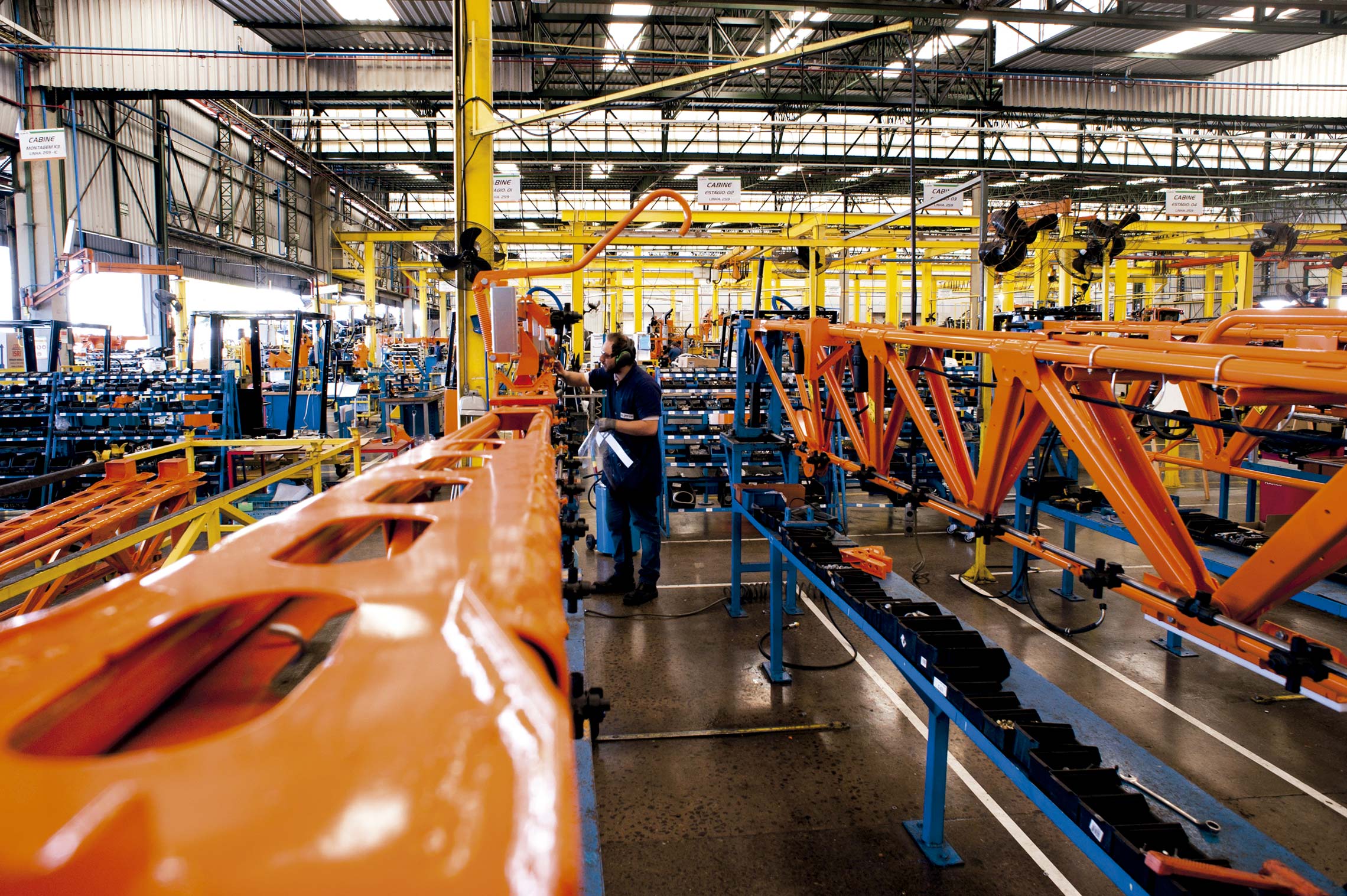 Long-standing innovation
Jacto was founded in Pompeia by sheer circumstance. In 1939, Japanese immigrant Shunji Nishimura (1910–2010) left São Paulo City for the interior in search of work. He went as far as he could go by train. At the time, Pompeia was the last station on the westbound main line of the São Paulo rail network. Nishimura rented a house and posted a sign-out front reading “We Fix Anything”. He soon had a thriving business repairing all sorts of machinery for farmers in the area, including imported dusters—pesticides were then sold as powder. In 1948, Nishimura developed his own duster, the first to be produced in Brazil, with the advantage that it could be carried as a backpack, whereas competing dusters had to be held in front of the user, limiting movement. This invention led to the founding of Máquinas Agrícolas Jacto.

Sixty-nine years later, in 2017, the Jacto Group posted net revenue of R$1.22 billion and net income of R$94.4 million. The agricultural division accounts for approximately 70% of revenues. The group also includes a plastic manufacturing company, a medical equipment business, a cleaning equipment division, and a trucking company. The group has a total workforce of 3,429 employees. Jacto markets its products in 110 countries and has a facility producing portable equipment in Thailand and another site producing heavy equipment in Argentina. The agricultural division derives 25% of its revenues from foreign markets.

Fernando Gonçalves Neto says the company’s advisory board, consisting of five of the founder’s seven children, has set a goal of doubling the company’s size by 2025. How this will be achieved is part of the company’s business strategy and is kept confidential. Neto could only comment that new products and services are at the core of the company’s plans. Last year, 25% of revenues came from products placed on the market in the three previous years, and the company hopes to sustain new-product revenue levels between 20% and 30%.

One of its first breakthrough products was the world’s first coffee harvester, launched in 1979. In 2015, the company launched another highly innovative product on the coffee-farming market—the K 3500—a modular vehicle accommodating harvesting, spraying, pruning, and fertilizer spreading systems that can be changed out in just a few hours. The platform sits more than three meters off the ground and above the plantation rows, with only the wheelbase touching the ground between rows, allowing it to be used in higher-density coffee plantations. The development of the K 3500 resulted in six patent applications. 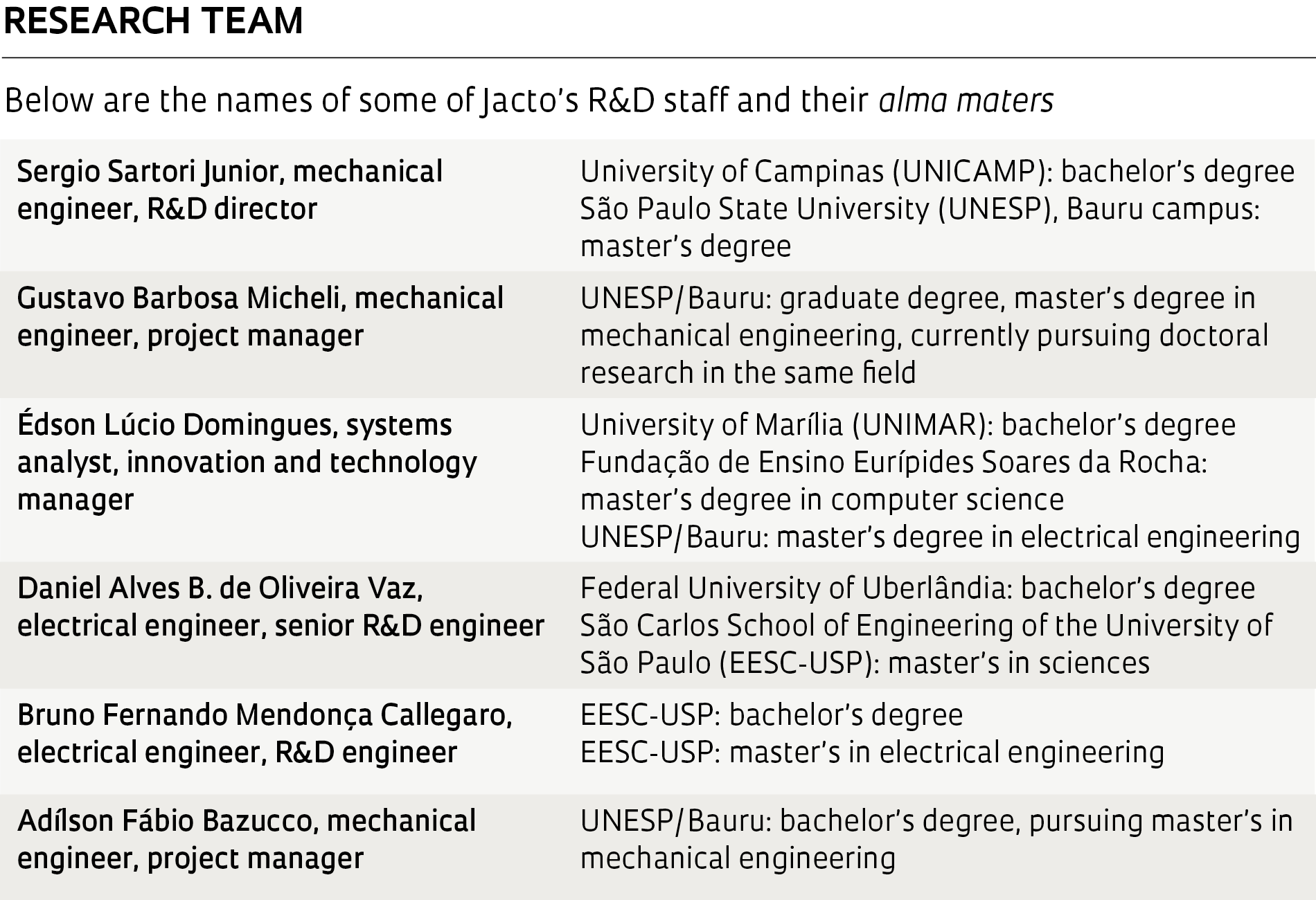