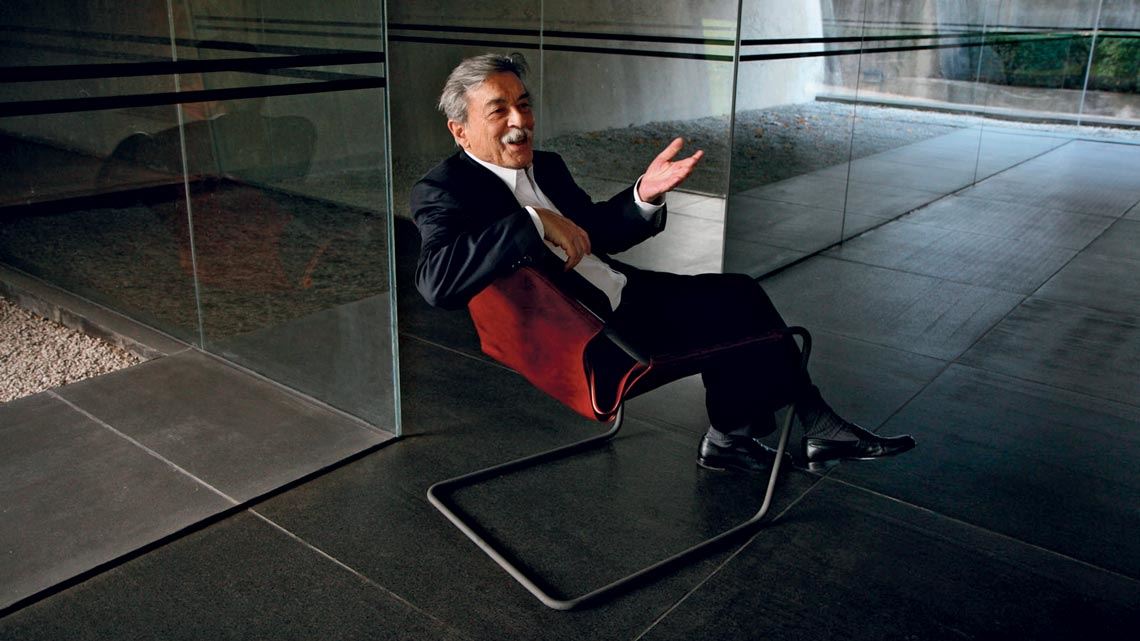 2006 record shows Rocha seated in the armchair Paulistano, which he himself designed at the end of the 1950s

Architect Paulo Mendes da Rocha, who died on May 23, had a unique academic career. In 1969, he was removed from the University of São Paulo (USP) by the military dictatorship (1964–1985), along with another 65 professors. With the political aperture, he returned in 1980 to the university’s School of Architecture and Urban Planning (FAU) as a teaching assistant—on the condition that he remain there until becoming a tenured professor in 1998, when he was then forced to retire at the age of 70. In 2010, he received the title of professor emeritus. “Paulo did not do his master’s or doctorate, but even without a formal academic career, he helped train generations of architects. And later, he even worked in collaboration with some of his former students,” shares Helena Ayoub, professor at the Department of Design at FAU-USP. “He showed that the design of a building can also be a body of research.”

Sharing Ayoub’s view is Ana Maria de Moraes Belluzzo, also a professor at FAU-USP. “Paulo was a great thinker and impeccable defender of the social function of architecture and of urban planning in the contemporary world. It is not by chance that his work inspires theses, dissertations, and academic articles in Brazil and abroad.” Also known for his strong, sour temperament, the professor’s eloquent and shrewd manner used to inspire his architecture students. He was an excellent storyteller and not only spoke of architecture, but also topics such as visual arts and politics.  When he stopped to talk on the ramps or in common spaces at FAU, an enormous group would soon gather to listen to his tirades,” says former student Leandro Medrano, who teaches today at the same institution. “Paulo had a unique view of the world and an inspiring perspective of reality. He was capable of finding new angles for any topic,” says Luiz Eugenio Mello, current scientific director of FAPESP, and who contracted Rocha in 2010 for the architectural design of the Vale Technological Institute.

Paulo Archias Mendes da Rocha was born in Vitória (Espírito Santo), on October 25, 1928. When he was about six years old, he moved with his family to São Paulo. Appreciation for the act of construction was present among his family. His father, Paulo de Menezes Mendes da Rocha (1887–1967), was an engineer and directed the Polytechnic School of USP between 1943 and 1947; his maternal grandfather, Serafim Derenzi (1863–1941), worked as a builder in Espírito Santo.

Rocha graduated in 1954 from the Faculty of Architecture and Urban Planning at the Mackenzie Presbyterian University (FAU-UPM). Four years later, together with his then partner, architect João Eduardo de Gennaro (1928–2013), he won the public competition to design the gymnasium for the São Paulo Athletic Club. “It is a project that has fundamental elements that are aligned with Paulo’s design style. There he said everything that needed to be said,” states architect Ciro Pirondi, one of the founders of the City School where, in his opinion, close to 90% of the professors were students of Rocha. “He was extremely rigorous with technique, but he never let go of poetry.”

In 1961, the circular structure with open sides, covered with wood and metallic tiles and supported by six pillars, received an extraordinary international architecture award at the São Paulo’s 6th Biennial. The feat projected onto the São Paulo backdrop the name of the young student of the so-called São Paulo school of architecture. “Paulo’s architecture used elementary shapes and considerable logic, where nothing was by accident. All of the building elements were there for a specific purpose,” notes Edson Mahfuz, of the School of Architecture and Urban Planning at the Federal University of Rio Grande do Sul (FAU-UFRGS).

In that same year, he was invited to lecture at FAU-USP by architect João Batista Vilanova Artigas (1915–1985), regarded as a mentor at the São Paulo school of architecture and one of his great teachers. Projects from this period included the Casa Butantan (1964), where he lived with his first wife, Virginia Ferraz Navarro, and their children.  A little while later, Rocha and Artigas began to be persecuted. “At the time, my father was a rising architect, and the removal of his civil rights hindered his career both within and outside the university,” confirms his son, Pedro Mendes da Rocha, also an architect.

Upon being terminated by the military regime, Rocha was prohibited from working for government agencies but, ironically, won the competition for designing the Osaka Pavilion, which housed the Brazilian headquarters at the 1970 International Exposition in Japan. “He needed to go to Japan to develop the project and travelled with much fear of the Brazilian regime assaulting him,” continues his son. “After the fair, the pavilion was going to be demolished, but he talked about receiving a proposal from a university interested in transforming that space into a school of music, an idea he adored. However, the military revoked the offer and the pavilion ended up being destroyed. He used to talk about this being a second abolishment.”

Beginning in the 1980s, with the weakening of the dictatorship, the architect carried out a series of projects that became icons, such as the Brazilian Museum of Sculpture and Ecology (MuBE) in São Paulo. In the 1990s, upon being contracted to redesign the state’s Pinacoteca, located in a neoclassic building designed by the engineer-architect Francisco de Paula Ramos de Azevedo (1851–1928), Rocha decided to develop the project on the job site, in partnership with another architect, Eduardo Colonelli. But he never abandoned the office that has operated since 1973 at the same address: a commercial building in the central region of the city.

“At that time, many architecture offices exchanged the clipboard for the computer, but he liked to develop his ideas in freehand drawings, on waxed paper or paper models,” shares Catherine Otondo, professor at FAU-UPM and author of thesis “Design and building space: Relationships between thinking and making in the works of Paulo Mendes da Rocha,” defended in 2013 at FAU-USP. “Since the computer was not part of his creative process, he decided not to bring technological equipment to his office. In that same period, he let his team go and moved to developing his projects in partnership with offices built by former students or longtime collaborators,” he reports.

His became internationally known in the second half of the 1990s. It is interesting to note that the book published about the architect’s work, Mendes da Rocha (1996), was released by a foreign publisher in Spain, Gustavo Gigli. The book is signed by Catalan architectural critic Josep Maria Montaner and by Brazilian architect Maria Isabel Villac, who during that time was doing her doctorate on Rocha’s work at the Polytechnic University of Catalunya in Barcelona. In her opinion, the architect’s work was practically unknown in Europe. “When I presented Paulo’s work to my professors, using Montaner as an example, they were very surprised with the quality of the projects,” says Villac, who today is a professor at FAU-UPM, and finished with: “In Brazil, Paulo was known within the architecture realm, but it is worth noting that the works of architects like him, who came from the São Paulo school of architecture, lost their place to post-modern architecture and disappeared from specialized magazines at the start of the 1980s.”

A short while after the launch of his book, the architect was honored in 1997 with the Mendes da Rocha Special Room at the 10th Documenta in Kassel. In 2000, he won the Mies van der Rohe Award for Latin-American Architecture for the renovation of the Pinacoteca. “He brought nobility to renovation projects, which were seen as lesser work,” says Belluzzo. In 2006, he became the second Brazilian architect to win the Pritzker, referred to as the Nobel Prize of Architecture. In 2015, he received an honorary doctorate from the University of Lisbon, in Portugal. Following these awards were the Golden Lion at the Venice Biennial (2016), the gold medals from the Royal Institute of British Architecture (2017), and the International Union of Architects (2021), among others.

Winning these awards did not affect his routine, according to his son Pedro. “He continued to take on few projects, which allowed him to establish a close relationship with the production of each one, and to remain steadfast to his notion of only doing what he truly believed in and doing it by hand,” he shares. “Furthermore, he cherished an austere way of life, without a cell phone, website, or car. He was a great supporter of public transit, adored walking, and liked being on the street.”

This was reflected in one of his last projects, the SESC May 24 (2017), in partnership with MMBB Architects. Located in the bustle of downtown São Paulo, the building was adapted to have 13 floors, connected by a ramp, that lead to an open pool on the penthouse level. “The ground floor is a continuation of the street and built as a type of town square that invites the city into the building,” according to architect Raquel Rolnik, professor at FAU-USP. “Paulo believed that benefiting from architecture was a right for all and that it should be part of the urban landscape in an open, cooperative way.”

Paulo Mendes da Rocha died at 92 years of age, of lung cancer. He leaves behind his wife, architect, and jewelry designer Helene Afanasieff, and six children.