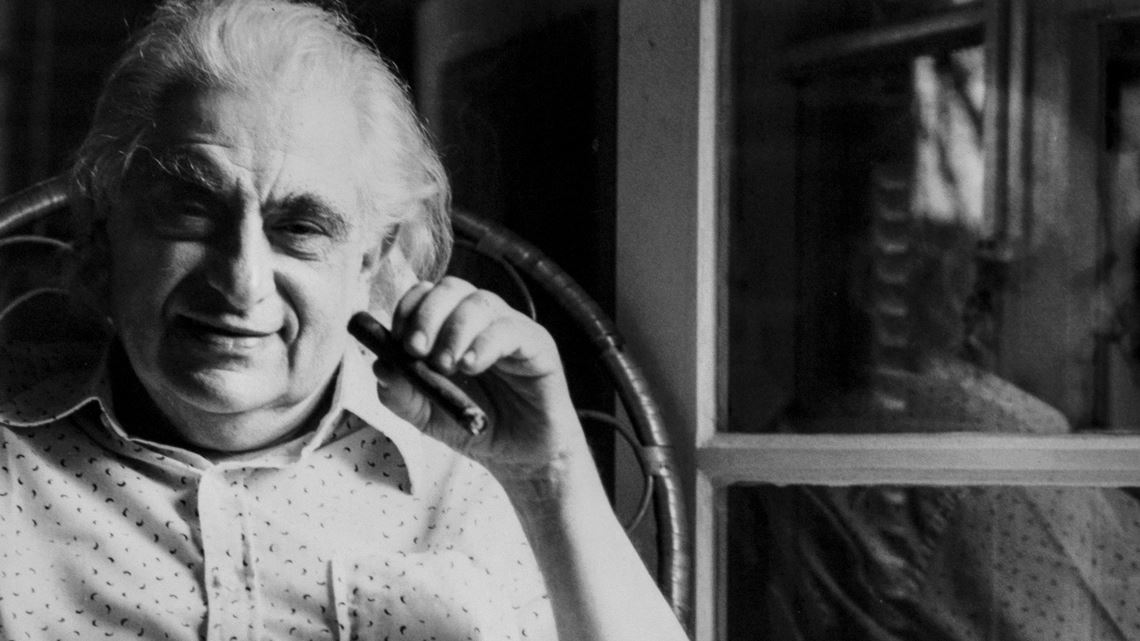 Schenberg at his home around 1982

The large order of shoes that had just arrived at an apartment building on rua São Vicente de Paula, in São Paulo’s charming district of Higienópolis, sometime in the 1950s, was surely some kind of mistake. When asked about it by his wife, Mario Schenberg (1914–1990) confirmed that all 25 pairs of shoes were indeed for him. The order had been placed just hours earlier at Mappin, a downtown department store. But far from being an extravagance, buying a car-load of shoes of the same make and model was a way he had found to spare him the task of ever again having to shop for footwear. For a man who devoted his time and energy to reading and debating about science, art, and politics, buying a lifetime supply of shoes all at once was a purely practical matter.

His relatives saw this carelessness about fashion as the antithesis of his otherwise highly aesthetic nature as a theoretical physicist, mathematician, and art critic. “He hated shopping for clothes, so he left that task to my mother,” recalls his daughter, Clara Guerrini Schenberg, a retired professor of genetics at the USP Institute of Biomedical Sciences. One of Brazil’s pioneers in the field of theoretical physics and astrophysics, Schenberg taught several Brazilian physicists who would later rise to international prominence, including César Lattes (1924–2005), José Leite Lopes (1918–2006), and Jaime Tiomno (1920–2011).

Born Mayer Schönberg, the son of Russian Jews originally from Germany, Schenberg completed high school in 1930 in his hometown of Recife before moving to Rio de Janeiro to attend a college prep course. He took an interest in history, art, and mathematics from an early age. He wanted to study in Europe, but because his family couldn’t afford it, he returned to his northeastern home state to study at the Pernambuco School of Engineering.

In 1933 he transferred to the Polytechnic School of São Paulo (POLI), which a year later became a part of the newly created University of São Paulo (USP). He was brought to São Paulo by the “prospects that they would open a school of science there,” he said in an interview for the book Voar também é com os homens – O pensamento de Mário Schenberg (Flying is also for men: Thoughts from Mário Schenberg; EDUSP, 1994), authored by José Luiz Goldfarb, a professor of physics and history of science at the Catholic University of São Paulo (PUC-SP). While there, Gleb Wataghin (1899–1986), an Italian-Ukrainian physicist who had recently arrived at USP, convinced him to switch to physics. 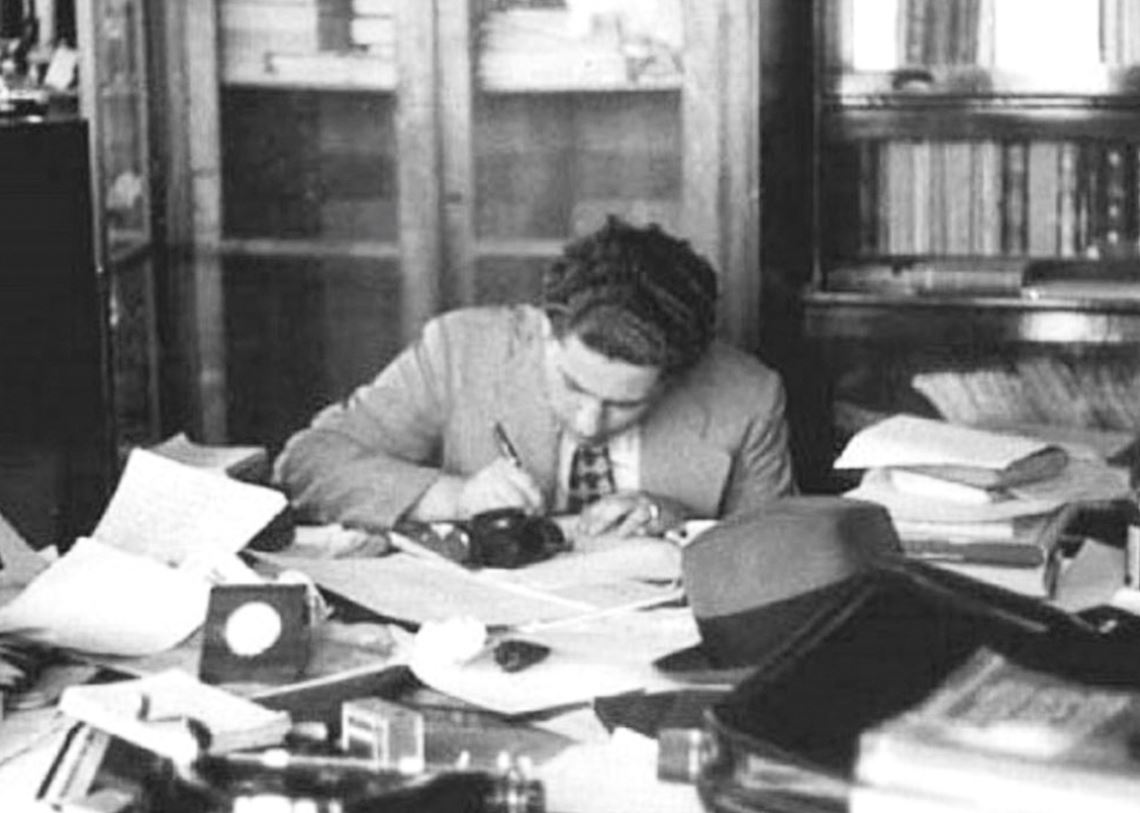 After earning a degree in electrical engineering at POLI in 1935 and in mathematics at the now-defunct School of Philosophy, Science, and Literature the next year, he was hired by Wataghin as an assistant lecturer in experimental physics. In 1938, political persecution of university professors during the Estado Novo (“New State”; 1937–1945) regime led Schenberg to apply for an education grant from the government of São Paulo and move to Italy.

It was at the Institute of Physics at the University of Rome that he first began working on cosmic rays, a field in which he would later distinguish himself, alongside physicist Giuseppe Occhialini (1907–1993)—years later, Occhialini became a professor at USP on invitation from Wataghin, and in 1947 he, alongside Lattes and others, co-discovered the pi meson, a particle that expanded scientists’ understanding of the subatomic world.

While in Rome, Schenberg also worked with the Italian physicist Enrico Fermi (1901–1954), who won the Nobel Prize in Physics in 1938. In 1932, Fermi coined the name neutrino for the subatomic particle first postulated in 1930 by theoretical physicist Wolfgang Pauli (1900–1958). Neutrinos would only be observed experimentally in 1956. In 1938 Schenberg collaborated with Pauli in Zurich, a few years before the Austrian received the Nobel Prize in Physics, in 1945. In Paris he worked with fellow physicist Frédéric Joliot-Curie, a recipient of the Nobel prize in 1935.

On returning to Brazil in 1940, Schenberg was “a different person,” noted Wataghin. “He had done fine work in cosmic rays and had later begun working in electrodynamics,” he remarked in an interview with sociologist Simon Schwartzman for the book, A formação da comunidade científica no Brasil (The formative years of Brazil’s scientific community; Companhia Editora Nacional and FINEP, 1979). Wataghin felt that Schenberg had learned a great deal in Rome and, with nothing more to do in Brazil, he would do well to work abroad again. 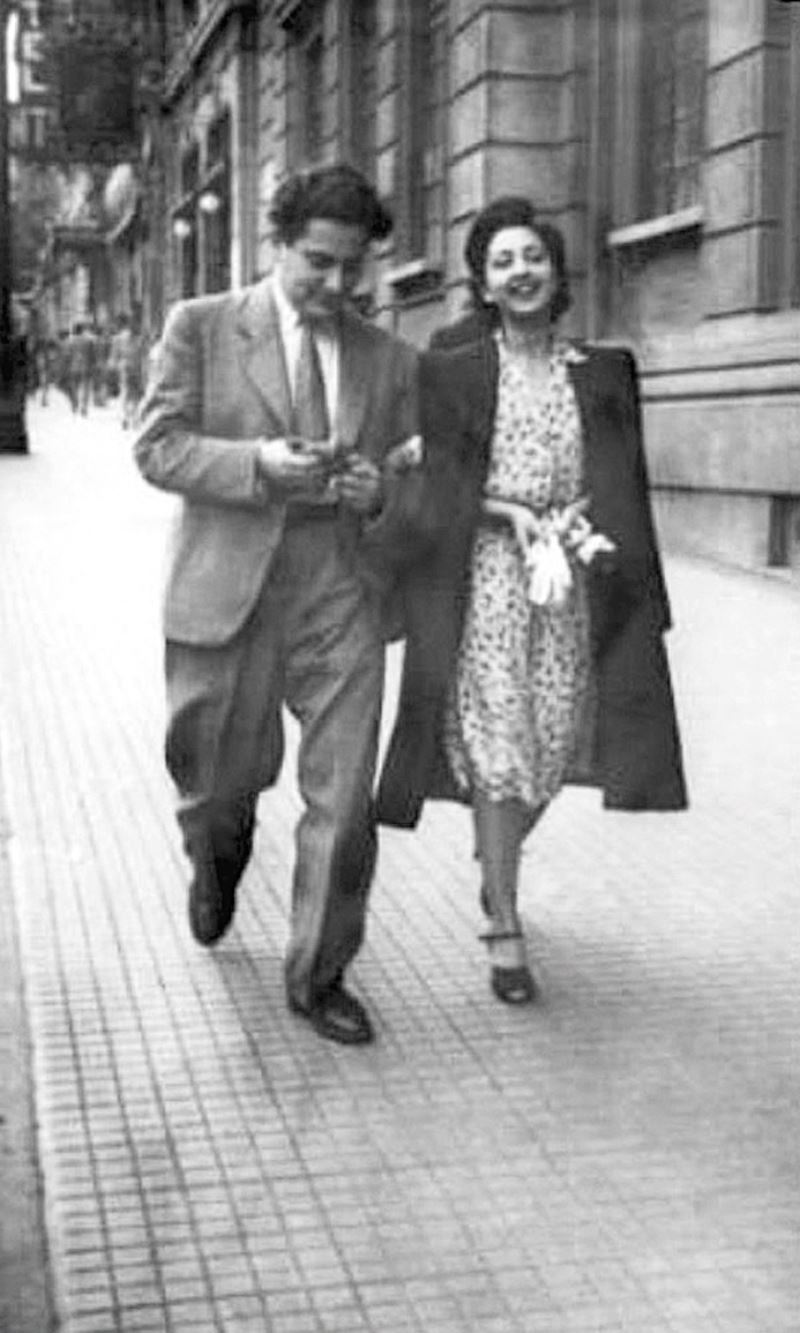 Schenberg followed his advice and departed that same year for George Washington University on a Guggenheim Fellowship, where he joined a team led by Russian-born American physicist George Gamow (1904–1968). “Schenberg introduced the neutrino into astrophysics to explain the stellar collapse that causes cosmic explosions known as novae and supernovae,” wrote Alberto Luiz da Rocha Barros (1930–1999), a former professor at the USP Institute of Physics (IF-USP) and once an assistant lecturer to Schenberg, in an article published in the journal Estudos Avançados in April 1991.

His work on neutrinos, which he published in 1941, made Schenberg internationally renowned. “It was during a conversation with Gamow that Schenberg had an epiphany and realized that the loss of neutrinos from a star could cause a supernova,” wrote Antonio Carlos da Silva Miranda, a professor of physics at the Federal Rural University of Pernambuco (UFRPE), in a chapter of the book História da astronomia no Brasil (The history of astronomy in Brazil; Mast, MCTI, 2014).

The discovery of this phenomenon, which Gamow called the Urca effect, helped to solidify his theory of the Big Bang—the explosion that is believed to have given rise the Universe about 13.8 billion years ago. Gamow chose this name after visiting a casino in the Rio de Janeiro district of Urca with his wife and Schenberg. “In a tribute to Brazil, we’re calling it the Urca effect, because energy disappears in a star’s core as fast as money does at the Urca casino,” Schenberg would later explain to Schwartzman.

At the University of Chicago, Schenberg worked for a time with Indian-born American astrophysicist Subrahmanyan Chandrasekhar (1910–1995). In 1942, they introduced the Schönberg-Chandrasekhar limit (Schenberg would sign his scientific papers as Mario Schönberg, using his father’s original surname) in a paper they co-authored about star evolution, which was seminal in the development of the field of stellar astrophysics. 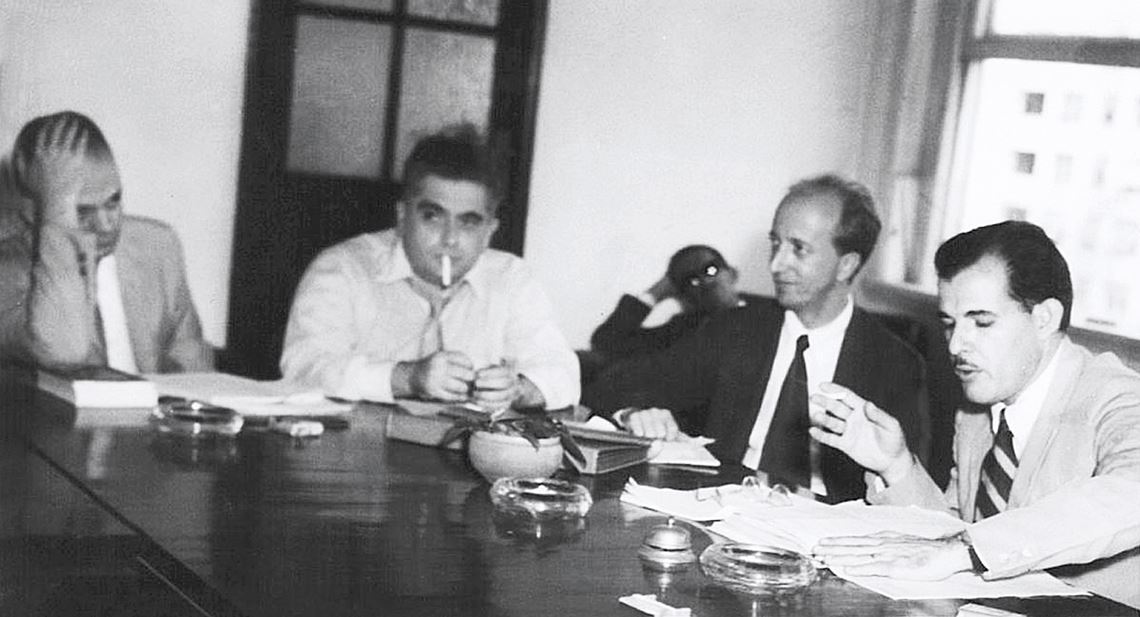 Schenberg between José Leite Lopes (right) and César Lattes during a meeting with Antônio Moreira Couceiro, then head of the CNPq, in 1958Mast / CNPq

The Schönberg-Chandrasekhar limit is the maximum mass of a star’s core above which it will enter into gravitational collapse, initiating nuclear fusion of helium. Schenberg considered this to be the most important paper in his career. He was 28 at the time. In 1983, Chandrasekhar would receive a Nobel Prize in Physics for his theoretical research about physical processes within stars.

“Few Brazilians have worked with as many brilliant scientists and Nobel laureates, including names like Fermi, Chandrasekhar, and Gamow,” says physicist Luís Carlos Menezes of IF-USP, who was first a student then a friend of Schenberg’s. “He was highly respected and admired internationally.”

After returning again to Brazil, in the late 1950s and early 1960s Schenberg helped to create the Department of Materials and Mechanics and the Solid-State Physics Laboratory at IF-USP, and bought the first computer at USP. “He believed the next revolution would come from the field of materials physics and the use of silicone and crystals,” says Goldfarb, who met him at USP during a seminar about Isaac Newton (1643–1727). “And he was right, of course: that very field provided the foundation for the development of computers and the entire information technology industry.”

As he was used to abstraction, invisible particles, and immaterial fields, Schenberg ventured with ease into the colorful and vibrant world of art. His fondness of paintings, sculptures, and architecture came from his childhood. “I’ve always been keenly interested in art since the age of 8, when I visited Europe for the first time with my parents,” he wrote in what he referred to as his artistic biography in 1983. “I visited countless museums, cathedrals, and palaces.” 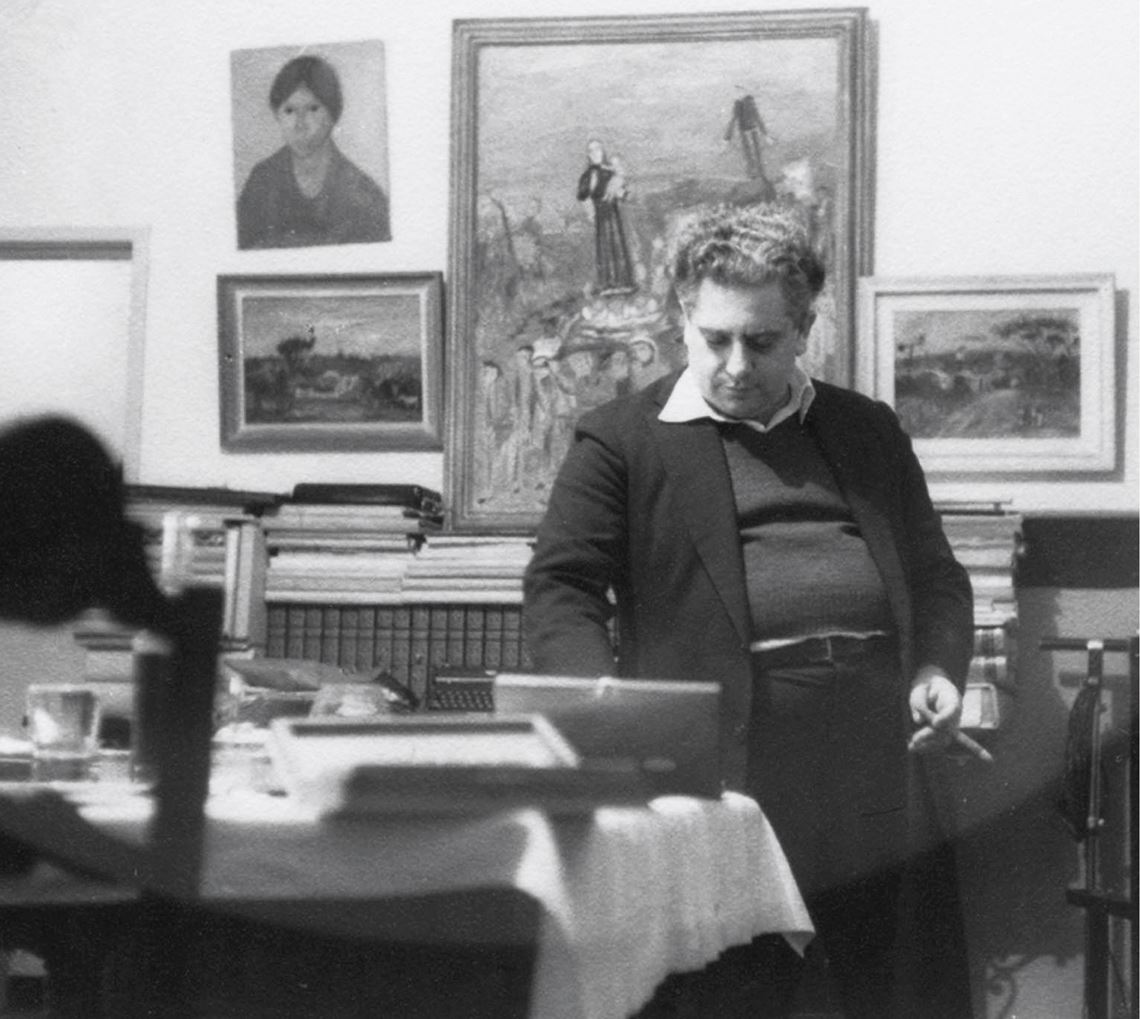 Schenberg would often entertain young artists at his home. “Sometimes the art they showed him was not particularly interesting and still immature, but Mario would still give it his attention and was always very encouraging,” said poet and translator Haroldo de Campos (1929–2003) in an interview for Goldfarb’s book, Diálogos com Mario Schenberg (Dialogs with Mario Schenberg; Nova Stella, 1985).

“I attended several meetings at Schenberg’s home,” says artist José Roberto Aguilar. “In the same evening, he’d be discussing atomic particles with Lattes one minute, and the next he’d be talking to musician Jorge Mautner about his ‘Atomic Maracatu.’” Lygia Clark (1920–1988) and Hélio Oiticica (1937–1980) also enjoyed presenting their work to Schenberg as a “poetic sounding board,” as Campos put it, referring to his ability to listen carefully before making any critiques—which he always did tactfully.

Like fellow physicists Roberto Salmeron (1922–2020) and Leite Lopes, Schenberg reconciled his academic interests with politics, and was elected for two terms as state deputy in São Paulo: the first in 1946 as a member of the Brazilian Communist Party (PCB), and the second in 1962 via the Brazilian Labor Party (PTB).

He helped draft the São Paulo State Constitution in 1947, alongside intellectuals such as Caio Prado Júnior (1907–1990). Article 123 of the new Constitution called for research funding to be provided by the State, leading to the creation of FAPESP in 1962. 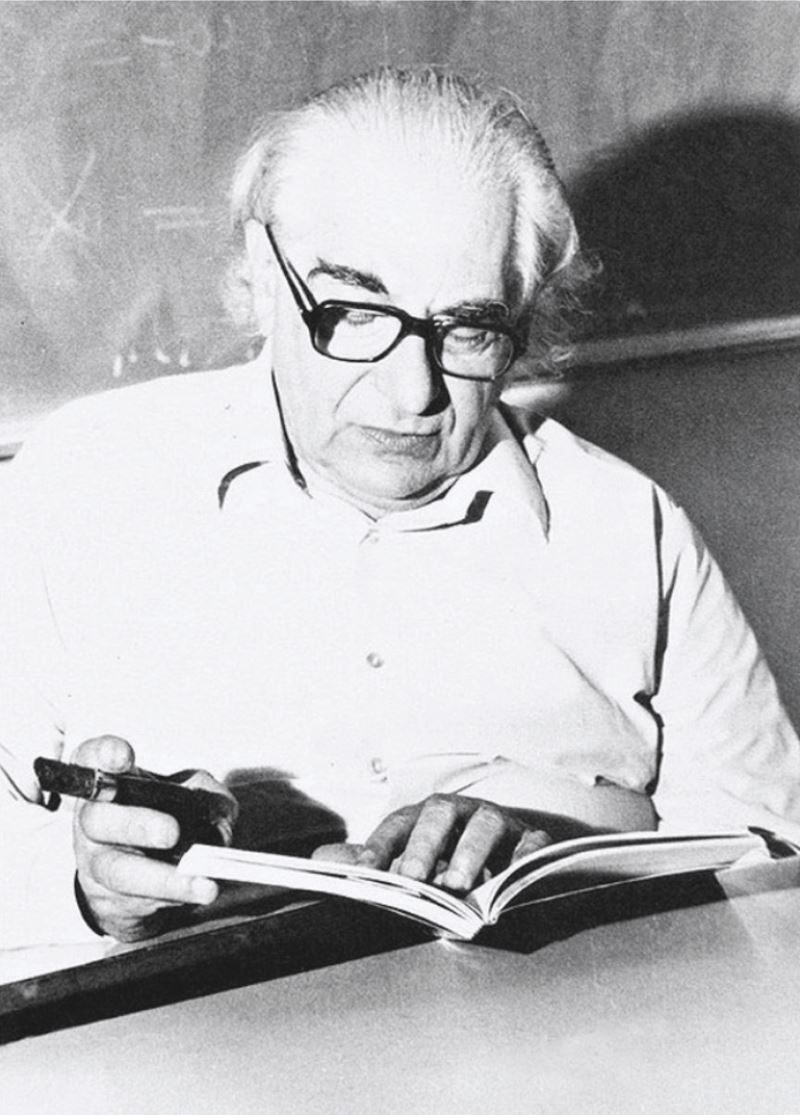 He remained in Brazil throughout the worst of the military dictatorship (1964–1985). Because of his membership of the PCB, he was removed from his position, arrested, and forced to retire under Institutional Act No. 5 (AI-5), but still he chose not to flee the country. When they raided his apartment, the police confiscated a Baroque sculpture of a Catholic saint, mistaking it for a sculpture of Vladmir Lenin (1870–1924). They also confiscated several books, among them a copy of Plato’s Dialogues, which the authorities considered subversive.

“After he was released, the court gave my father permission to go to the police station and explain that there was no way Plato could have been a communist,” recalls Ana Clara Schenberg. “He managed to get his book back, but not before spending several hours expounding on Platonic philosophy at the police station. For several months, he went to the police station every Thursday and spent the afternoon explaining the contents of the books they had seized until he was able to recover them.”

“As his friends had dispersed, during this period he became more devoted to art criticism and occasionally painting,” says Aguilar. Without abandoning physics altogether, he became a regular at biennials, art galleries, and artists’ studios. He was a member of the judging panel at the São Paulo Biennial in 1965 and 1967, and joined the Brazilian Association of Art Critics and the International Association of Art Critics.

Although an atheist, when his health took a turn for the worse he asked a Buddhist monk to attend his funeral. “He was very interested in religions and would often visit Umbanda houses, synagogues, and temples,” says Goldfarb. “He said religion had something deep down that we didn’t understand, but one day we might understand.”