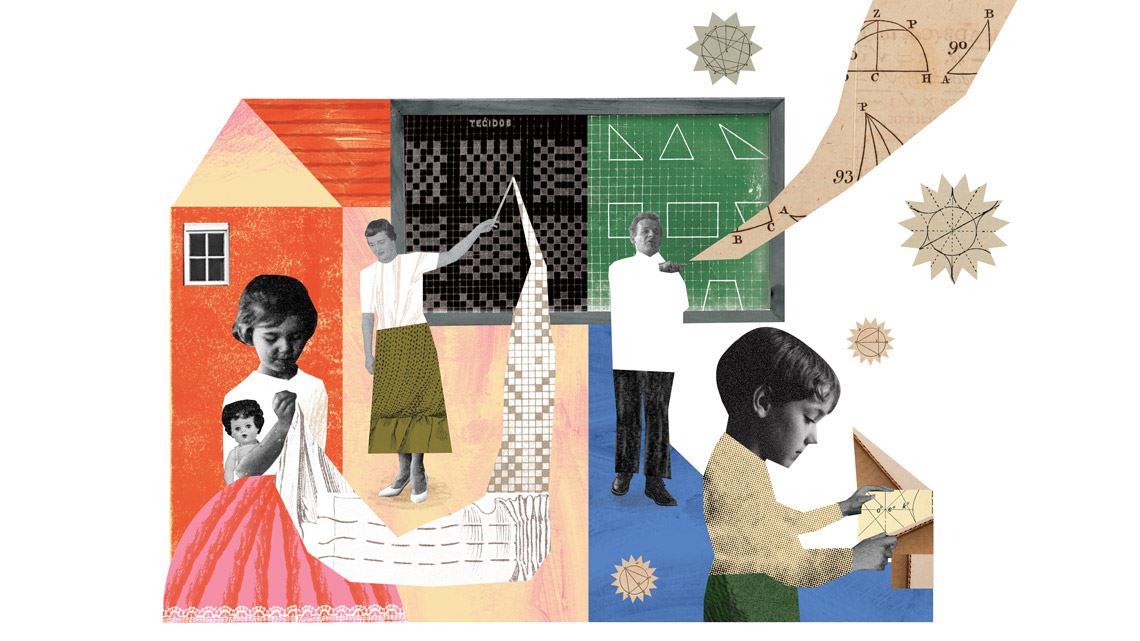 Since mathematical handicraft began to be included in elementary school curricula at the end of the nineteenth century—initially in Rio de Janeiro—it has served as a gateway to the basic notions of geometry. By building objects out of cardboard and wood, boys aged 7 to 12 learned about perpendicular and parallel lines, angles, and plane figures. In separate classes for girls, these activities dispensed with complex mathematical foundations and were given another name: needlework. More than just sewing and embroidery, students were taught how to become “mothers and wives.” Gender inequality in the early days of formal mathematics education is one of the topics addressed in Histórias do ensino de geometria nos anos iniciais e seus parceiros: Desenho, trabalhos manuais e medidas (The history of early-years geometry teaching and its partners: Drawing, handicraft, and measurements; published by Livraria da Física), a book recently released by Maria Célia Leme da Silva, a mathematics professor from the Physics Department of the Federal University of São Paulo (UNIFESP), Diadema campus.

The book summarizes the key results of recent studies by Brazilian researchers on the history of geometry teaching in elementary schools. The studies show how the history of mathematics education, a relatively new field of research, can give an insight into the role played by theoretical disputes and political and social reforms in how the subject is taught in schools. “Textbooks, teaching programs, legislation, and pedagogical journals are important historical sources that only began to receive attention in the last two decades,” notes Silva.

The idea that geometry should be taught differently to boys and girls was described in pedagogical manuals from several European countries, including France and Sweden, at the turn of the twentieth century. “Much of this literature circulated in Brazil during that period,” says Silva. The first didactic materials and booklets on the topic were disseminated in the country by intellectuals who had contact with new movements during trips abroad, such as modern pedagogy, which emerged in Europe and was pioneered by Swiss educator Johann Heinrich Pestalozzi (1746–1827), who proposed an intuitive teaching method based on the sensory perception of children.

Ezequiel Benigno de Vasconcellos Junior, an educator from Rio de Janeiro, was one of those responsible for promoting this approach in Brazil. In his 1897 book Trabalho manual: Cartonagem escolar (Handicraft at school), he recommends that teachers use geometric figures in classes and exercises to stimulate intelligence and reasoning in boys—the gender distinction is made by the author.

The ideas presented by Vasconcellos were in contrast with more traditional views, such as those of Olavo Freire da Silva (1869–1941), a professor from Rio de Janeiro. In his 1894 book Primeiras noções de geometria prática (First notions of practical geometry), Freire defended a more rigid, less experimental, and more abstract method for teaching geometry, based primarily on the use of rulers and compasses. He also suggested that students should take lengthy tests. “Ultimately, this approach tested the children’s ability to memorize and reproduce concepts,” says Silva.

This model was the most adopted when Brazil’s educational system was created, used in many states until the mid-twentieth century, explains Silva. “Contributing to this was the fact that Freire’s book was published by Livraria Francisco Alves, considered one of the biggest publishing houses in Brazil at the time, with a strong influence on the distribution and circulation of textbooks.”

The approach to mathematics education advocated by Freire was linked to the traditions of military education, according to Wagner Rodrigues Valente, a mathematics professor and researcher at UNIFESP’s Department of Education and president of the Associated Group for Studies and Research on the History of Mathematics Education (GHEMAT), which involves scholars on the subject from almost every state in the country.

“Since Colonial Brazil, mathematics was taught based on memorization and exhaustive repetition of exercises,” says Valente, lead researcher on a study funded by FAPESP that is investigating the historical processes that affected the education of mathematics teachers between 1890 and 1990. “Contrary to what you might think, the first mathematics teachers in Brazil were the military, not Jesuits.” According to the researcher, although the Jesuit priests had a privileged scientific education (see Pesquisa FAPESP issue nº 226), they were more interested in the philosophical aspects of the discipline. 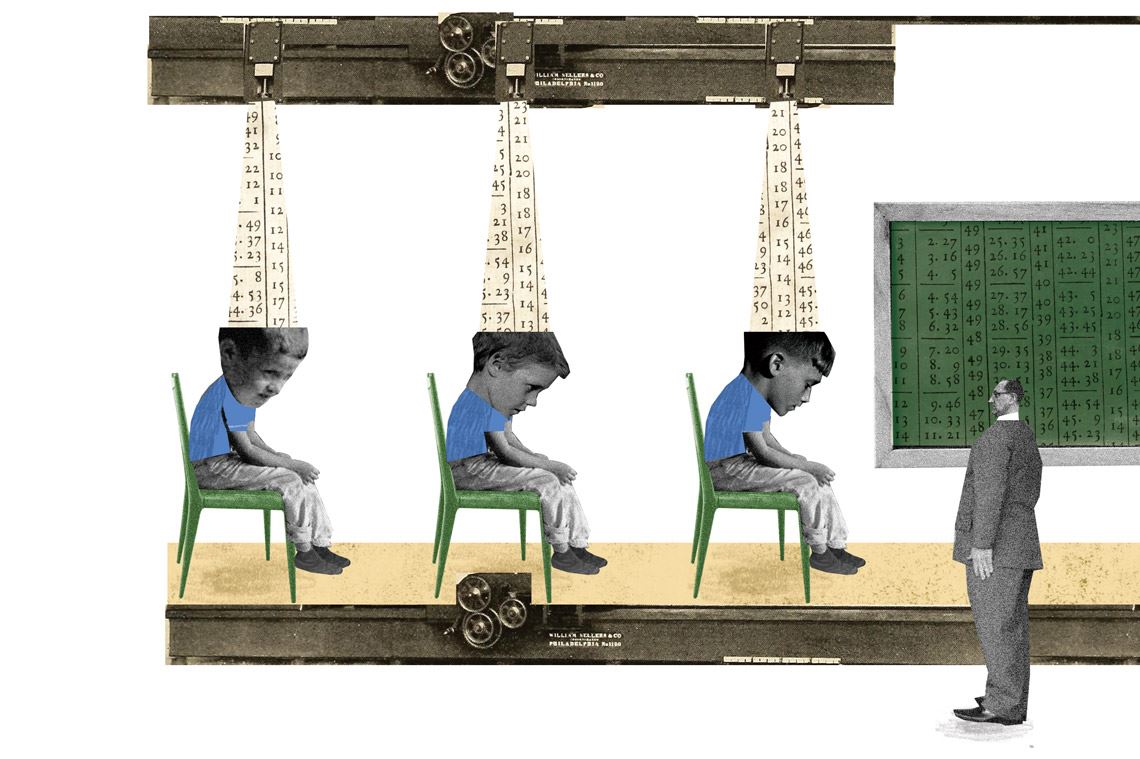 Ana Matsusaki“Here in Brazil, it was up to military schools to teach mathematics for practical purposes, which related to using weapons and constructing fortifications,” says Valente, author of the book Uma história da matemática escolar no Brasil: 1730–1930 (A history of school mathematics in Brazil: 1730–1930; Livraria da Física, 2020). According to him, Brazil’s first mathematics teaching model, known as Artillery and Fortification Classes, was established in Rio de Janeiro—at the time capital of the country—in 1738. The course was restricted to future military officers until Brazil’s Independence in 1822.

“After that date, mathematics became part of the general education of the elite—basically government officials and professionals,” says Valente. The same occurred in countries such as France and Germany, where different branches of mathematics, including geometry, became part of the curriculum at elementary and high schools around the same time.

In the 1930s, a movement led by Euclides Roxo (1890–1950), a mathematics professor and director at Colégio Pedro II in Rio de Janeiro, began seeking to modernize mathematics teaching. Before then, there had been separate courses in algebra, arithmetic, and geometry at schools rather than a specific mathematics discipline.

Roxo was one of the people responsible for merging the separate fields into one new school subject. “The change took place under Roxo’s influence, but it was only institutionalized through the reforms implemented by Francisco Campos in the first government of Getúlio Vargas [1882–1945],” explains Antonio Vicente Marafioti Garnica, a mathematician and professor of mathematics education at São Paulo State University (UNESP) in Rio Claro.

Roxo also engaged in discussions with his peers, defending the differentiation between mathematics as a disciplinary field and mathematics teaching. “He believed teacher training should cover skills specific to education, in addition to mathematical knowledge,” emphasizes Garnica. This distinction, which helped pave the way for mathematics teaching as a research area in Brazil, is considered the starting point for studies on the history of mathematics education, says Valente.

“A question was established: who has the authority to say what should be taught in schools? Mathematicians, or the people actually teaching mathematics?” Tensions between mathematicians and educators became more frequent as pedagogical movements gained strength in the USA and Europe, encouraging new teaching methods in almost all school disciplines.

Valente explains that from the perspective of mathematicians, school courses should aim to train “child mathematicians.” “To that end, students would need exposure to content deliberately chosen as if they were all to become mathematicians one day.” The approach reflects the concern among mathematicians with ensuring survival of the scientific field itself—something that many educators did not agree on.

To a large extent, the debate remains controversial, says Maria Laura Magalhães Gomes, a scholar of the history of mathematics education and professor at the Federal University of Minas Gerais (UFMG). “Unfortunately, we still see situations where mathematics teaching has barely changed over time.” The idea that only some students have a “gift” for math has become common sense, says Gomes.

This dynamic, says the researcher, is fueled by didactic approaches that continue to value memorization and technique instead of exploring the meaning of mathematical concepts. “Mathematics education should be aimed at everyone, not just the minority who will dedicate their professional lives to mathematics in the future.” 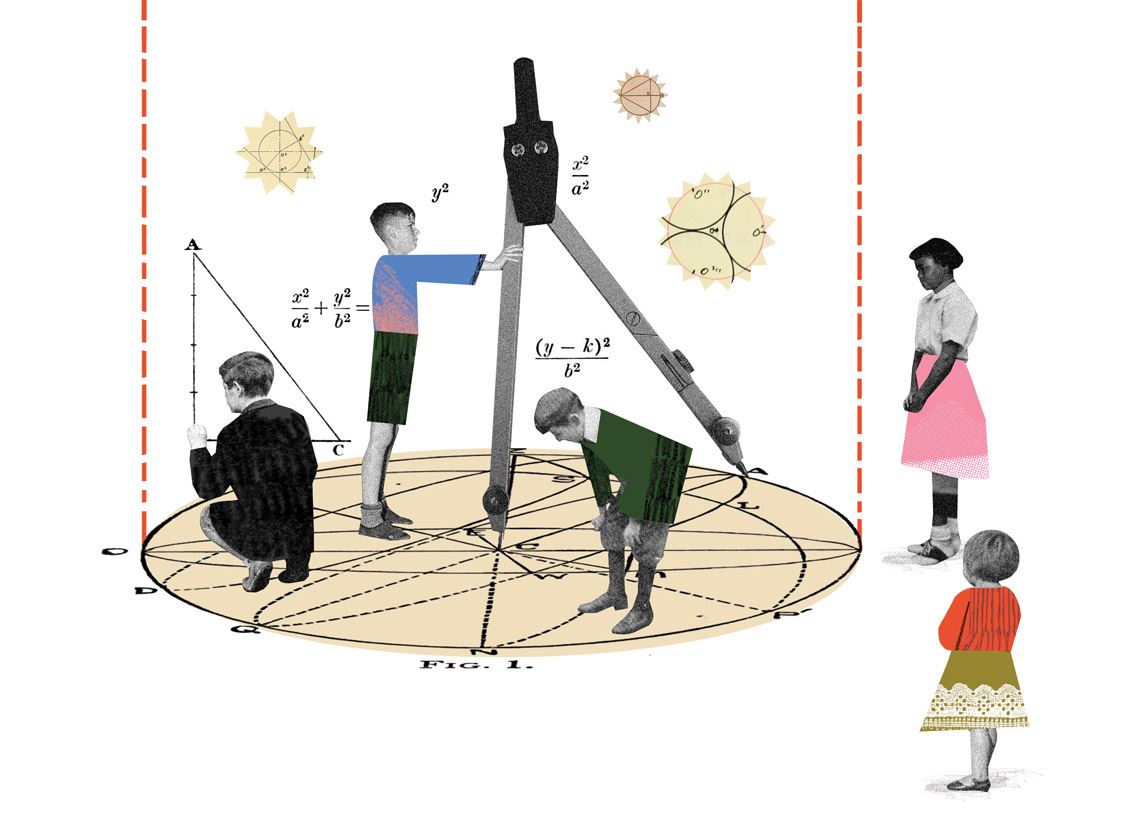 Ana MatsusakiA new attack on traditional pedagogical models was launched in the early twentieth century by the New School movement, which emerged in Europe and soon gained a foothold in Brazil with the publication of the Manifesto dos pioneiros da educação nova (Manifesto of the pioneers of new education) in 1932. Among the signatories were educators Fernando de Azevedo (1894–1974) and Anísio Teixeira (1900–1971). The movement opened space for the dissemination of teaching methodologies that placed the child as the focal point. This was welcomed by Roxo and other mathematics educators.

“It was then that manual drawings began growing in importance in the discipline,” Silva points out. “Experimental methods based on games and problem solving have become part of school programs in many states, including São Paulo.”

After the Second World War (1939–1945), a new wave of changes rippled through mathematics education. In Europe and the USA, there was widespread agreement that urgent teaching reforms were needed, laying the foundations of New Mathematics, as explained by Antônio Maurício Medeiros Alves and Denise Nascimento Silveira, two mathematicians from the Federal University of de Pelotas (UFPel), in an article published in the journal Tópicos Educacionais in 2017.

Representatives of the movement, including Swiss psychologist Jean Piaget (1896–1980), argued for changes to the content taught in schools. Their suggestions included the introduction of set theory, conceived by Russian mathematician Georg Cantor (1845–1918). They wanted to introduce students to notions of arithmetic through sets of elements with the same characteristics, explain Alves and Silveira. Cantor’s ideas are not easy to understand, but “new mathematicians” found a way to adjust them to the school level without removing the high level of abstraction and complexity.

“The movement also had geopolitical motivations,” says Valente. In 1957, rattled by the Soviet Union’s successful launch of satellite Sputnik 1, the USA increased investments in technological research. The proponents of New Math realized that in order to eliminate their technological disadvantage in relation to the Soviets, they had to rethink how science and mathematics were taught.

In Brazil, the first textbooks influenced by New Math were published by educator and mathematician Osvaldo Sangiorgi (1921–2017). The movement lost impetus over the following decades, criticized as rigid and excessively theoretical by American mathematician Morris Kline (1908–1992), author of the 1973 book Why Johnny Can’t Add: The Failure of the New Mathematics. “The degree of abstraction proposed by New Math was not really within the reach of elementary school students,” says Valente, noting that in Brazil the model was revised in 1974.

In recent years, researchers in this field—most of whom have degrees in mathematics and an interest in history—have begun investigating and mapping collections containing textbooks, educational bills, and other documents. Some also use oral history to reconstruct events or analyze aspects rarely covered by traditional historiography, says Garnica, head of UNESP’s Mathematics Education and Oral History Research Group (GHOEM). “While the country has a national curriculum, every school and teacher adopts their own teaching strategies,” he explains. “When we look at the regional context, based on testimonies from teachers and directors, we see that pedagogical approaches are adapted and combined to meet local needs.”