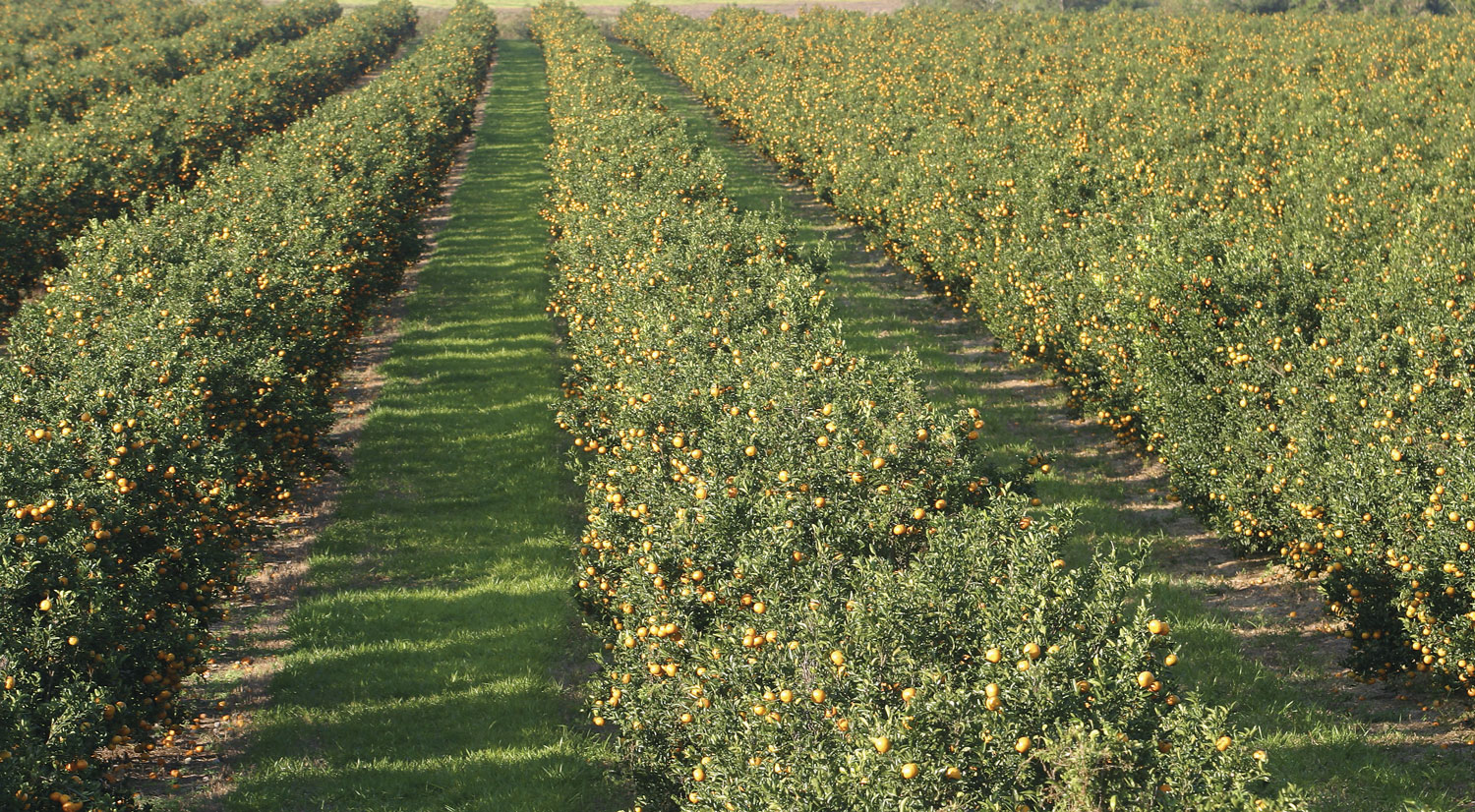 Citrus farmers in the state of São Paulo have successfully implemented biological control technology developed by the Luiz de Queiroz College of Agriculture of the University of São Paulo (ESALQ-USP) to combat citrus greening, one of the most devastating citrus grove diseases in history. Also known as HLB, which refers to its original name in Chinese (Huanglongbing, or yellow dragon disease), citrus greening disease turns leaves a yellowish color and leaves the fruit unripe and deformed. The solution is to remove the sick tree from the root. In the state of São Paulo alone, the pathogen has already prompted the removal of approximately fifty million orange trees covering an area of 100,000 hectares (ha) since 2004, an amount that represents one-fourth of the state’s citrus orchards. Citrus greening is caused by the bacteria Candidatus Liberibacter asiaticus and Candidatus Liberibacter americanus, which are transmitted to citrus plants by a small insect, the psyllid Diaphorina citri.

The researchers led by agricultural engineer José Roberto Postali Parra, a professor from the Department of Entomology and Acarology at the Luiz de Queiroz College of Agriculture of the University of São Paulo (ESALQ-USP), have developed a method to raise the wasp species Tamarixia radiata—a natural enemy of the psyllid—in the lab. The wasps act as parasites to immature psyllids (those still in the nymph stage and therefore unable to fly) by laying eggs inside the insects. When wasps hatch from these eggs, the insects are killed. However, a significant problem is associated with this process. Namely, the insecticides used by farmers against psyllids are also fatal to their natural enemies.

The team from ESALQ-USP found that areas surrounding commercial farms could host wasp populations. These wasps could then serve as parasites against psyllids before they reach the groves and contaminate the trees. Thus, the researchers have found that T. radiata can eliminate over 80% of the vector population surrounding the crops. The 2014 experiment was performed in the city of Itapetininga, São Paulo in a three-kilometer radius around an orange grove managed by Citrosuco, one of the world’s largest orange juice producers. To measure results, the researchers used sticky yellow cards as traps. Attracted to the color, the psyllids became stuck to the glue-coated cards. Thus, the trap served to indicate the insects’ arrival at the farms. The fewer psyllids stuck to the trap, the more effective the wasps. “Now, our priorities are to measure the impact of the reduction in this vector’s population on the spread of the disease and to determine how many parasite release campaigns are necessary to increase efficacy in combating the psyllid,” explains Parra.

Deformed oranges on a tree infected by the diseaseFUNDECITRUS

The release of Tamarixia radiata in the vicinities of sprayed orchards is an important tool for controlling the disease in abandoned areas, on family farms, and at households with citrus trees in the yard or with decorative plants identified as Murraya spp. The latter are remote citroid fruit trees common in cemeteries and other public areas in Brazil, and these trees attract psyllids. “The release of the wasps into these areas was found to be effective at reducing the incidence of the disease on commercial farms,” explains Parra.

Biological pest control has been a focus of studies in Brazil since the 1950s. In the 1960s, the United States and Europe developed the concept of integrated pest management as an alternative to the application of extensive chemical controls against pests on farms, including bacteria and viruses. In Brazil, some companies currently raise insects to combat other insects on farmlands. One example is the Trichogramma genus of wasps, which are used to combat various moth species on cotton, sugarcane, soy, tomato, and cabbage crops (see Pesquisa FAPESP, issue No. 195).

There have been records of psyllids in São Paulo’s orange groves since the 1940s, but the first report of citrus greening disease did not occur until 2004. The cities of Matão and Araraquara, two large orange-producing regions in the state, were the epicenters of the infestation that devastated long-standing orchards. The entomology team from ESALQ-USP immediately began to study the possibility of introducing a natural parasite against psyllids in the orange groves. They found information on the efficacy of T. radiata-based pest control in French territories in the Indian Ocean. In addition, one of Parra’s students working toward a PhD in entomology, Ecuadorian Mariuxi Gomes Torres, detected specimens from this wasp species in Brazil. The ESALQ-USP team needed to study both the wasp’s and the psyllid’s reproductive cycle before developing the technology to raise the insect in the lab. These tasks were completed in 2011 with the financial support of FAPESP and the Brazilian Fund for Citrus Protection (FUNDECITRUS).

The success with T. radiata led Citrosuco to build four biofactories insect breeding laboratories. The first biofactory was established in Itapetininga in 2014 followed by the labs in Boa Esperança do Sul, Onda Verde, and São Manoel, all located in São Paulo State. The company has released a total of 3.9 million wasps into nature, which has resulted in a significant reduction in psyllid capture on the edges (the first 300 meters) of their commercial orchards, the most vulnerable areas. “It’s an effective and sustainable way to respond to the disease,” says Helton Leão, general manager of the Agricultural Department of Citrosuco. The company plans to build three more biofactories by 2018, which will result in a total production capacity of approximately 600,000 wasps per month. These specimens will be sent to the company’s 26 orange groves.

In 2015, FUNDECITRUS, which is maintained by citrus farmers, invested R$400,000 to build a T. radiata biofactory in Araraquara, São Paulo with the support of Bayer CropScience, the agriculture research division of the German chemical company. The laboratory can produce 100,000 wasps per month. Each insect can eliminate up to 500 psyllid nymphs. In December 2016, FUNDECITRUS surpassed the one-million mark for the number of wasps produced. The wasps are distributed free of charge to citrus farmers, who release them within an area that totals 2,420 ha. Parra estimates that there are 12,000 ha surrounding the commercial orchards that should be the target of biological control, with continuous wasp release campaigns.

Citrosuco and FUNDECITRUS have been working hard to spread the word about the techniques to combat citrus greening. Citrosuco has organized workshops emphasizing the use of the wasps in order to promote these practices among independent orange producers who supply Citrosuco and even Citrosuco’s competitors. “It is not one isolated measure or another that’s going to beat citrus greening; a combination of efforts is needed,” says Leão from Citrosuco. According to Antônio Juliano Ayres, general manager of FUNDECITRUS, the current idea is for citrus farmers to invest in their own wasp production efforts.

Biofactories require many rooms for the different stages of growth to be housed at controlled temperatures. The cost of a small biofactory capable of producing approximately 100,000 wasps per month can range from R$40,000 to R$200,000 depending on the infrastructure that the institution in question has for the project. According to Parra, two or three employees are typically sufficient to raise the wasps. The wasps may be raised by people with a secondary-school education as long as the employees are trained and assisted regularly by entomologists.

With headquarters located in the Netherlands and activities in Brazil since 1942, the Louis Dreyfus Company (LDC) uses FUNDECITRUS wasps. Jorge Costa, director of operations at the Plataforma Sucos juice company, reports that they periodically release wasps on the farms and in surrounding areas to complement the integrated management program currently in place for HLB. Recommended by FUNDECITRUS itself, the measures include monitoring the presence of the vector and planting seedlings obtained from nurseries protected against psyllids. “This management plan has kept HLB infestation low in the orchards we oversee and has therefore kept productivity levels consistent on the farms,” Costa says.

Citrus farmer Janderson Bortolan, who owns two farms in the São Paulo countryside (located in the cities of Guaraci and Cajobi) with a total of 40,000 plants, also uses FUNDECITRUS wasps. Bortolan utilizes intense chemical pest control campaigns with complete orchard spraying one week and spraying specific to the edges of the properties the next week. Using this method, he keeps the rate of infection below 0.5% in his trees. Since 2015, he has performed five wasp release campaigns around his property, all of which were performed three days after chemical spraying.

Adult and immature psyllids; the latter are known as nymphsHenrique Santos / FUNDECITRUS

Citrus greening has spread worldwide. The disease affects farms in Asia, Africa, and the Americas. Recently, one of the psyllid vectors of the bacterium Trioza erytreae was detected on citrus trees in the Mediterranean region, placing Italian and Spanish farmers on alert. Currently, Australia is the only region with no signs of infection or vector insects. In addition to orange trees, lime and tangerine trees are the main victims of the disease. According to agricultural engineer Antônio Juliano Ayres, general manager of FUNDECITRUS, fruit production in an infected plant is reduced to only 25% of its potential. Fruit quality is also compromised; the fruit becomes bitter and more acidic. The plant must be pulled out at the root because the bacteria travel through the sap to infect the entire plant, including the roots, which renders pruning useless. The shoots and buds that form after pruning are the source of new infections.

In 2005, citrus greening disease was identified in Florida, the United States’ main orange-producing state. Prior to that date, annual production remained steady at approximately 220 million crates, each containing 40.8 kilograms of fruit. As a consequence of the disease, the 2016 harvest produced 67 million crates, which was the smallest harvest in 70 years. “American farmers have been reluctant to remove infected plants, and greening has spread. Now, it will be very difficult to undo this drop in production,” explains the general manager of FUNDECITRUS.

Ayres argues that Brazilian farmers who have already addressed other threats to orchards (such as citrus canker and citrus variegated chlorosis) are more open to adopting radical strategies that may include the destruction of contaminated fruit trees. Even so, the damage is extensive. FUNDECITRUS estimates that 16.9% of orange tree farms in the state of São Paulo and in the country’s Triângulo Mineiro region have experienced some degree of HLB infection to date. “In 2016, the country’s orange production was 244 million crates. It could have been five percent higher without the disease,” Ayres notes. Brazil is the world’s largest orange producer, and the state of São Paulo is responsible for 80% of the country’s production. Orange juice is the third most commonly exported product in the state. In 2016, sales from exports generated US$1.78 billion in revenue.