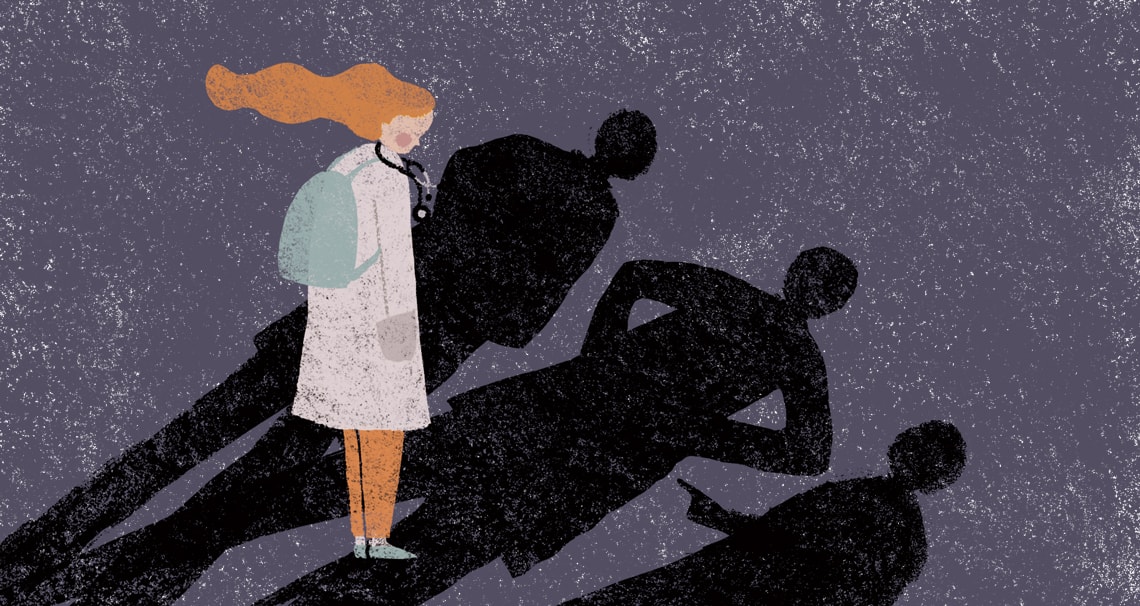 International surveys conducted since the 1990s show that interpersonal violence is commonplace in the health fields of higher education, especially undergraduate medical courses. Discrimination, persecution, and bullying are common occurrences during medical training, affecting academic performance and jeopardizing professional conduct among students, which could even reflect on the quality of patient care.

“In Brazil, although there has been research on mental illness, depression, quality of life, and physical and emotional exhaustion among medical students, there are still few studies on the occurrence of bullying, mistreatment, and other forms of abuse on medical courses,” explains Maria Fernanda Tourinho Peres, from the Department of Preventive Medicine at the University of São Paulo’s School of Medicine (FM-USP). In a study involving 317 university students in 2013, Peres found that excessive workloads, a high number of study hours, contact with diseases, and patient deaths can result in depression and can lead to aggressive behavior and bullying, causing victims to feel dissatisfied with their professional choice and even leading some to consider dropping out of the course. “The subject came to me through a group of students who told me that this type of suffering among their classmates was common,” she recalls.

The impact bullying has on the training of health professionals was the subject of the article “Perceived Bullying Among Internal Medicine Residents,” published by the Journal of the American Medical Association in August. Based on a survey conducted in 2016 by the American College of Physicians—one of the leading medical organizations in the USA—which gathered responses from approximately 24,000 medical residents in the country, the article shows that 13% of participants reported having experienced bullying since the beginning of residency training. The most common experiences include verbal harassment (80%), physical harassment (5.3%), and sexual harassment (3.6%). Exhaustion, depression, and poor academic performance were the consequences most cited by respondents.

Tension in academia
Different forms of bullying on health courses

INTERPERSONAL VIOLENCE AND HOW IT HAPPENS

INTERPERSONAL VIOLENCE AND WHY IT HAPPENS

“Bullying is related to power, and in most cases, involves people who see themselves as stronger, whether emotionally, socially, or even physically,” explains Zila Sanchez of the Department of Preventive Medicine at the Federal University of São Paulo’s School of Medicine (EPM-UNIFESP) and coordinator of its Graduate Program in Collective Health. Although studies on bullying are mostly concentrated on students under 18, the researcher says that it is possible to extrapolate this knowledge to medical schools. “Physical and verbal aggression, belittling, gossip, and racism are common elements in both educational stages,” she says.

Sanchez also draws attention to the concept of bullying, which according to her, is now used wrongly to define any situation of interpersonal violence. Bullying, however, presupposes an oppressive relationship between peers—it occurs repeatedly between people from a certain social group, such as students on the same course. “But such actions between a teacher and student are actually harassment, because those involved are at different hierarchical levels within the institution,” she explains.

Role of the institution
Administrators of health courses are well aware of the many reports of discrimination, violent hazing, sexual abuse, and excessive consumption of alcohol at university parties. However, little has been done to investigate the prevalence of abuse in students’ daily lives. “Universities have a tendency to minimize these types of problems,” says Lúcia Cavalcanti de Albuquerque Williams, from the Department of Psychology at the Federal University of São Carlos (UFSCar). For her, the behavior is often justified by a pervasive culture in health training that reinforces preconceived ideas that most cases are one-off events and that this is just the way things have always been.

“There is a strong power structure in medical schools where the older students often supervise the youngest, and this can lead to oppressive relationships,” says Paulo Saldiva, from the Department of Pathology at FM-USP and director of the Institute of Advanced Studies (IEA-USP), who draws attention to the fact that these schools are usually very old institutions with traditional practices from the past that must be reassessed in the current landscape. “University hazing, for example, is part of that tradition, but it has become more violent over time, until it reached a point where it simply had to be discussed publicly,” he recalls.

Appointed in 2014 to chair a committee investigating the growing number of reports of violence, mistreatment, and sexual abuse by students at FM-USP, Saldiva realized that there was little chance of really discussing the matter within the institution when he heard from the school board that the issues would be resolved internally—but without implementing any concrete measures. The case gained prominence when a civil inquiry was opened by the Public Prosecutor’s Office for Human Rights and Social Inclusion and a Parliamentary Committee was established by the São Paulo Legislative Assembly to investigate human rights violations at universities in the state. “It is important to remember that this problem is not exclusive to USP, and it also occurs on other undergraduate courses,” he says.

For Saldiva, many student movements started in recent years, such as groups that discuss issues of gender, ethnicity, and sexual orientation, for example, have served as a support network for victims of physical or psychological violence at higher education institutions. “I feel like there was an improvement after this crisis. Prevention campaigns and the establishment of an ombudsman to receive complaints have reduced the number of cases.”

In addition to power imbalances between older and younger students, harassment also occurs between teachers and students. “Intimidation by teachers in the classroom can have an impact on a physician’s professional identity, as it can for any other professional,” explains Marta Angelica Iossi Silva, from USP’s Ribeirão Preto School of Nursing. In general, acts of violence by faculty take the form of threats of low grades, humiliation, assignment of extra tasks as punishment, or even negative and demotivating comments about their area of professional activity.

“The interest among researchers from health fields in violence in the academic environment has made institutions more aware of the problem,” observes Matheus Francoy Alpes, a speech therapist and former student at USP’s Ribeirão Preto Medical School (FMRP-USP). In a master’s thesis completed in 2018 at FMRP-USP, he developed a scale of 56 situations of interpersonal violence related primarily to social discrimination, personal characteristics, and academic performance. The data were gathered from interviews with 132 students and 32 professors from the institution’s seven courses: medicine, biomedical science, physiotherapy, speech therapy, biomedical informatics, occupational therapy, and nutrition. “It was evident that there were many cases of bullying. But no effective measures were taken to combat the problem,” says Alpes.

According to the researcher, there are multiple factors behind bullying in higher education, often related to culture, history, and family. “Admission to university coincides with the final phase of adolescence, during which students have to adapt to the new challenges of adult life,” he says. After defending of his thesis, a Human Rights Committee was officially established at FMRP-USP with the objective of offering guidance to victims of violence at the university and investigating reports. As one of the members of the committee, Alpes celebrates the fact that since it was formed, occurrences have been falling thanks to awareness campaigns. “It is easier to fight bullying when it is officially discussed in the academic environment.”