In 2018, FAPESP invested R$1,216,750,480 in 24,720 research projects spread across all areas of knowledge. The amount was 15% higher than it was in 2017, in nominal values, and 6% higher when considering inflation—which breaks a downward trend in investment that began in the mid-2010s as a result of the economic slowdown. The Foundation’s budget is comprised of 1% of the tax revenue of the state of São Paulo, passed on by the Treasury, as determined by the São Paulo Constitution of 1989, and of funds from agreements with institutions and businesses to jointly fund research. The audit report can be found in the Relatório de Atividades FAPESP 2018 (FAPESP 2018 Activities Report), released in August, which is available in full at fapesp.br/publicacoes. The website also provides annual summaries of the Foundation since 1962, the year in which its activities began.

“The year 2018 has been one of major political changes in the country and of expectations for the future of higher education, science, and technology,” said FAPESP President Marco Antonio Zago in the opening of the report. “In this scenario, FAPESP has maintained its strong presence, marked by stability, a growing presence within the São Paulo science and technology system, and increased visibility at home and abroad.” Among the initiatives that stood out, one example was Jovens Pesquisadores – Fase 2 (Young Researchers – Phase 2), which aims at consolidating high-impact lines of research created by scientists who benefited from the Jovens Pesquisadores em Centros Emergentes (Young Researchers in Emerging Centers) program. Created in 1995, it seeks to attract young PhD holders from Brazil and other countries to lead research groups. About 1,600 researchers have already been considered; there are 227 ongoing projects in Phase 1 and 36 in Phase 2. Last year, R$59.6 million was invested in the program.

There has also been the restoration—after an evaluation by an international committee—of the 17 Research, Innovation, and Dissemination Centers (RIDC), which are networks of researchers dedicated to topics that are on the frontier of knowledge and impact society the most; they can be supported for up to 11 years.

New to the 2018 report was the presentation of investments made by the Foundation under six different funding strategies. The Research for the Advancement of Knowledge category, which ranges from short-term projects to more ambitious ones, such as Thematic and RIDC projects, accounted for 51% of disbursement: more than 5,000 grants were given in this category. Another 24% was invested in human resources education for science and technology: FAPESP allocated R$293 million to 10,222 grants in Brazil and abroad, offering 4,386 new grants. Ten percent of the proceeds went to supporting research infrastructure through equipment purchase or repair, among other necessities. The Research for Innovation category, which encompasses projects in collaboration with businesses, accounted for 9.5% of disbursement. One of the highlights was the approval of 270 new projects approved under the Technological Innovation in Small Businesses (PIPE) program. Finally, 4.5% went to research on strategic topics, such as climate change, bioenergy, biodiversity, eScience, among others; the remaining 1% was invested in research dissemination, mapping, and evaluation.

In terms of how the resources were distributed by field of knowledge, the 2018 data remains the same as that from previous years: life sciences accounted for 47% of disbursement; exact sciences, Earth sciences, and engineering, 33%; humanities and social sciences, 9%. The remaining 11% were allocated to interdisciplinary research. When the institutional links of funded researchers are analyzed, the University of São Paulo (USP) once again occupies first place, having received 43.2% of resources, followed by the University of Campinas (UNICAMP), with 14.8%. Federal research institutions in the state of São Paulo came in third, with 12.5%, and São Paulo State University (UNESP) held fourth place, with 11.2%.

In 2018, five new Centros de Pesquisa em Engenharia (Engineering Research Centers—CPE) were set up in cooperation with universities and businesses—four of which collaborated with Shell, to develop innovation in the field of new energies, and one with the Brazilian Agricultural Research Corporation (EMBRAPA), the Genomics for Climate Change Research Center. In these centers, every R$1 invested by FAPESP is matched by another R$1 from the business in question, and R$2 from the university or research institute that houses the center. “The Engineering Research Centers elevate the boldness of collaborative research between universities and companies and mobilize academic and business researchers around major challenges,” explains FAPESP Scientific Director Carlos Henrique de Brito Cruz.

The four centers created with Shell should receive up to R$34.7 million from the company. FAPESP has allocated them R$23.1 million, while R$53 million will come from partner universities and research institutes, in the form of salaries for researchers and support staff, infrastructure, and facilities. Two of the centers involve a collaboration with UNICAMP: one for the study of dense energy carriers, with the university’s Institute of Chemistry, and one for advanced energy storage, with the School of Chemical Engineering. The center for computational science of materials is based at the USP Institute of Chemistry in São Carlos, while the Institute for Energy and Nuclear Research (IPEN) houses the center dedicated to developing sustainable routes for methane conversion through electrochemical technologies. “Renewable energy production could triple by 2050,” explained Dutch geologist Joep Huijsmans, leader of Shell’s new energy research and technology division, at the launch of the centers. “In any case, we will still need large quantities of oil and gas to supply the full range of energy products the world needs.” FAPESP and Shell have shared a Gas Innovation CPE since 2015, based at the Polytechnic School of USP. 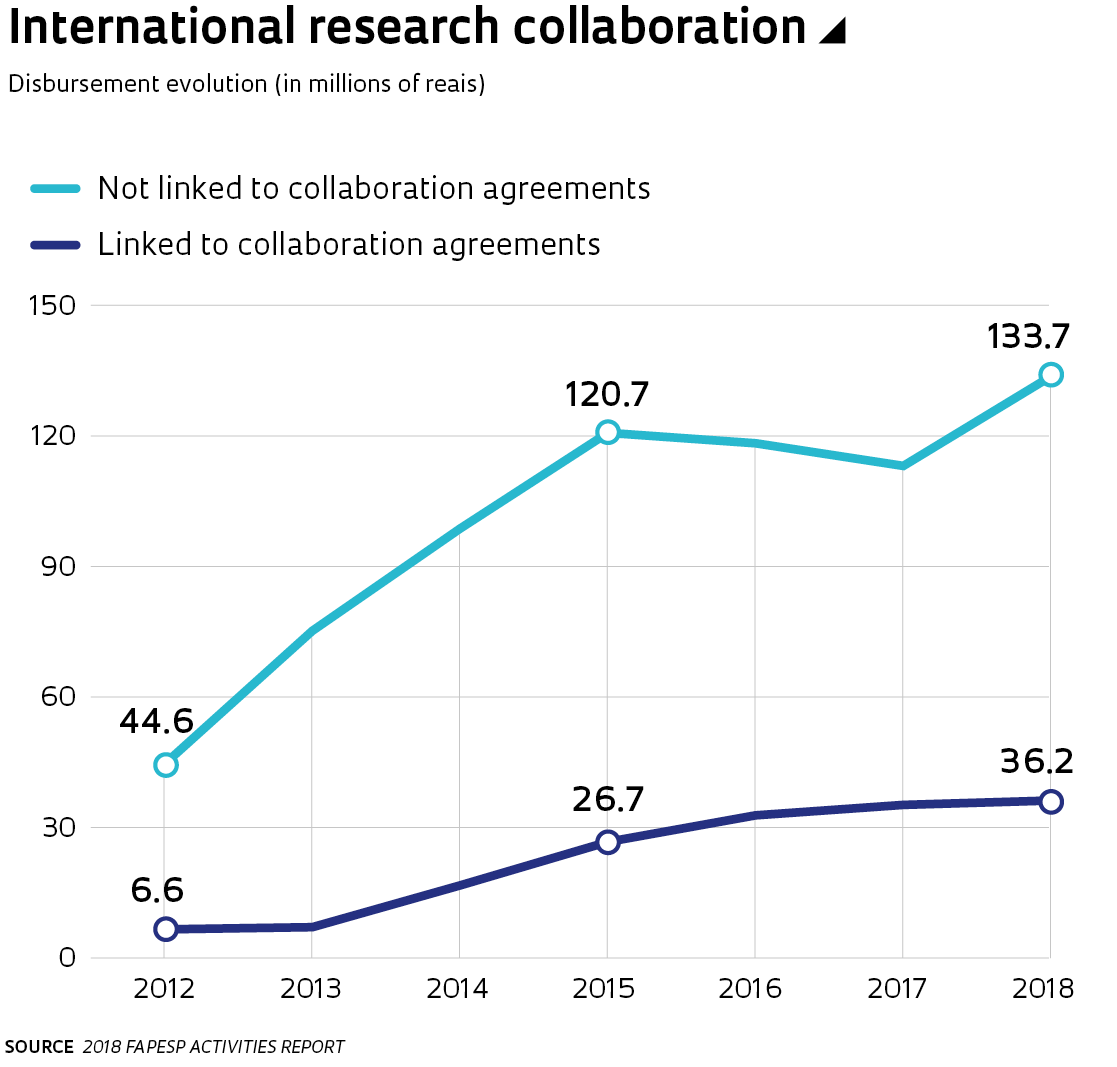 In the case of the EMBRAPA and UNICAMP center, the goal is to generate innovations that increase the resistance of plants to drought and heat, and to transfer technologies to the productive sector, using tools such as genetic engineering and genome editing. The investment from EMBRAPA should reach R$32.9 million, which will be matched by R$25.2 million from FAPESP, and R$44.7 million from UNICAMP. In 2018, FAPESP invested R$12 million to support the 10 centers. In addition to Shell and EMBRAPA, there are centers in partnership with GlaxoSmithKline (GSK), Natura, and Peugeot Citroën. Three other CPEs were being negotiated with Equinor, Koppert, and Grupo São Martinho, and were launched in 2019.

FAPESP has allocated R$216.6 million to collaborative research. In order to stimulate international cooperation, the Foundation invested R$133.7 million, emphasizing the categories of Research Internships Abroad (BEPE), which ranges from scientific initiation to postdoctoral grants, and Research Fellowships Abroad (BPE), which is accessible to researchers who have already finished their education, including senior researchers. 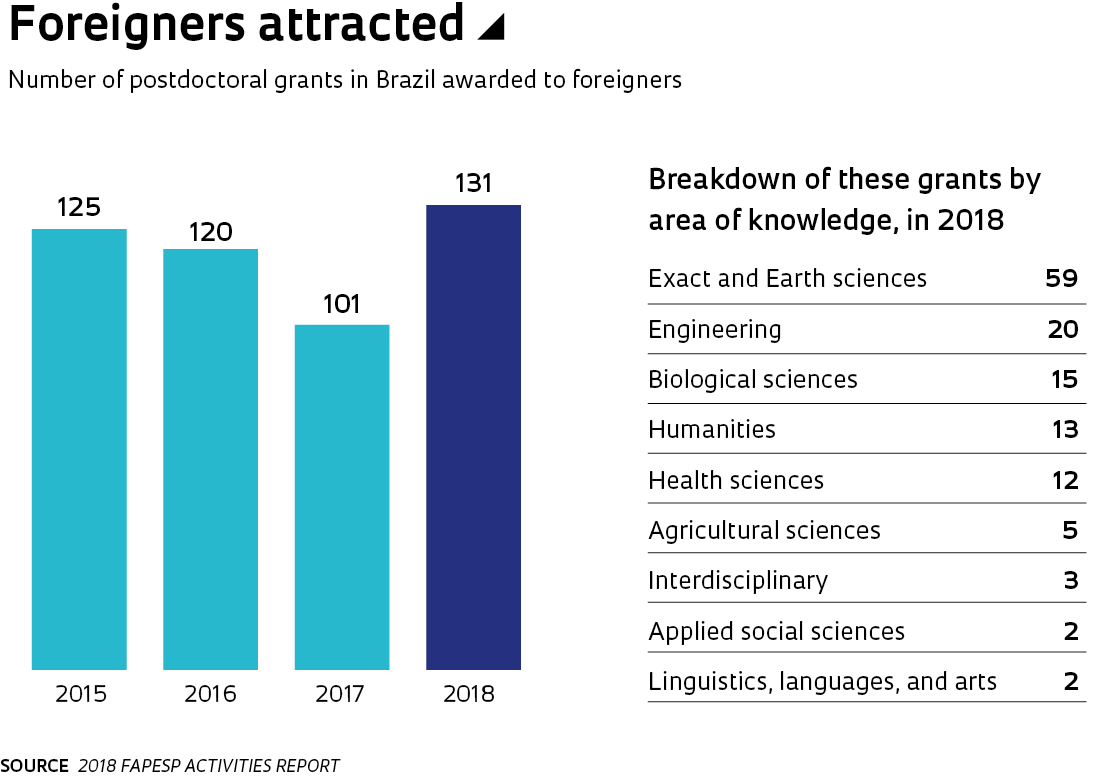 Exact and earth sciences
There was an increase in the number of postdoctoral grants awarded to foreigners in 2018. They totaled 131, making up 18.8% of the 694 grants of this type awarded—the highest amount in the last four years. The ability to attract scientists from abroad is an indicator of the competitiveness of research groups. Exact and Earth sciences stood out. Of the 182 postdoctoral grants in the country awarded in this area, 59—or 32%—were for researchers who obtained their undergraduate degrees abroad. In 2007, the rate was 16%. Engineering comes next, with 27% postdoctoral grants awarded to foreigners; the humanities and interdisciplinary areas had 21% each; applied social sciences, 14%; health sciences, and linguistics, languages, and arts, had 13% each; biological sciences, 9%; and agricultural sciences, 7%.

One of the strategies used by FAPESP to attract talent from abroad is the São Paulo School of Advanced Science (ESPCA) program, which helps implement short courses on advanced topics in São Paulo institutions. They are meant for undergraduate and graduate students, as well as young PhD holders—at least half of whom need to be recruited from abroad. One of the goals is to show students and researchers from abroad the research opportunities in São Paulo and attract the best talent. In 2018, 13 ESPCAs were held: seven at USP, three at UNICAMP, one at Mackenzie Presbyterian University, one at the Institute for Energy and Nuclear Research (IPEN), and one at the Brazilian Center for Analysis and Planning (CEBRAP).

The activities of FAPESP in 2018 were supported by more than 9,000 opinion-givers and scientific advisors, who analyzed the merits of 19,724 projects. These professionals issued 22,162 opinions, which resulted in the decision to award grants for 10,946 projects during the year; these added to the 13,774 projects that had begun earlier. The average time for the analysis of each proposal was 70 days.