The University of Campinas (UNICAMP) was the top filer of patent applications at the Brazilian Intellectual Property Institute (INPI) in 2017, filing a total of 77 patent applications, according to a June INPI report titled “Industrial Property Indicators 2018”. UNICAMP’s patent prowess is long-standing, the result of a decades-long policy of protecting intellectual property. Data from the university show that it currently has a total of 1,121 patents, of which 13% are currently being monetized. In 2015, UNICAMP executed 15 license agreements with companies. That number increased to 22 in 2017. These agreements provided more than R$1.34 million in royalties to UNICAMP in 2017, which is twice as much as the R$660,000 earned in 2016 but less than the record of R$1.93 million set in 2015.

While its patent performance is on the rise, UNICAMP is surpassed by the University of São Paulo (USP), which pulled in R$2.49 million in license revenues in 2017. USP currently has 1,299 patents in Brazil. However, USP’s license agreements have remained flat in recent years: five in 2015 and four in 2017. “We’re working toward playing a more active role in seeking out companies and attracting partners, instead of waiting for companies to come to us,” says biologist Antonio Carlos Marques, a coordinator at the USP agency for innovation. “Our strategy is now to collect information about available patents and approach potential users directly,” he says. “We’re hoping to see more cases like Vonau Flash, a new formulation of Vonau, a medication used to prevent nausea and vomiting.” The formulation was developed by the Laboratory for Medicine Development and Innovation (DEINFAR) at the USP School of Pharmaceutical Science, in collaboration with Biolab Sanus. The license agreement was executed in 2005 and is currently the University’s largest source of royalties.

The INPI data show that universities were again the dominant patent filers in Brazil in 2017 (see chart). The only company in the top 10 is CNH Industrial, an agricultural machinery and light truck manufacturer. In this aspect, Brazil’s science, technology, and innovation ecosystem differs greatly from developed countries, where companies are the most vested in protecting and monetizing intellectual property (see Pesquisa FAPESP issue no. 123). Revenues from technology transfer agreements executed by science and technology institutions have grown in recent years and was R$437.8 million in 2016, according to a report on Science, Technology, and Innovation Institution Policy Information Filings (FORMICT) prepared by the Brazilian Ministry of Science, Technology, Innovation, and Communications (MCTIC). Of total revenues, R$34.4 million are from licenses for intellectual property rights.

In 2016, 278 institutions, 193 public and 85 private, submitted policy information filings. In total, the filings reported 823 license agreements for intellectual property rights across patents, software or cultivars. Southeastern Brazil has the highest volume of reported revenues, with 59 license agreements generating R$21.5 million in revenues (see table). “We are likely to see a boost in new patents and license arrangements with the recently introduced regulations on science, technology, and innovation,” says MCTIC analyst and FORMICT coordinator Antenor Corrêa, referring to Act 13.243/2016, introduced by the federal government in February (see Pesquisa FAPESP issue no. 265). The new regulations permit Technological Innovation Centers (NITs), such as the innovation agencies run by USP and UNICAMP, to operate not as university departments but as private, not-for-profit organizations with their own legal personality. 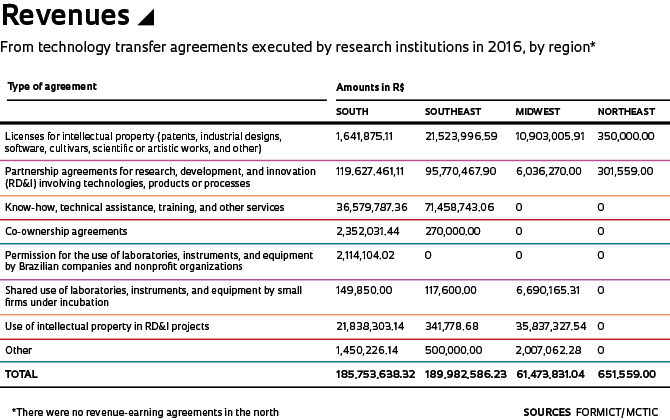 One of UNICAMP’s largest technology license agreements was executed with Cargill Agrícola, which uses a technique developed by researchers at the School of Food Engineering to produce fat that is low in saturated fatty acids. The process was licensed in 2014 and is used to produce food products such as cookies. The UNICAMP innovation agency, Inova, has implemented a range of strategies in recent years to boost technology transfer to industry. “More than just filing patent applications, our mission is to develop license arrangements so that academic knowledge ultimately benefits society,” says Inova director Newton Frateschi. The agency has worked to build closer relations with industry by helping companies access the innovation developed at the university. Inova has recently subscribed to the 100 Open Techs initiative, an online platform created by not-for-profit organization Wenovate to connect companies to solutions created in an academic setting. Last year, the institution listed 192 university-developed technologies on the platform, leading to 85 business meetings with companies.

Inova has also invested in building a platform to facilitate interaction between researchers and UNICAMP’s daughter companies, including companies created by students, alumni, persons with an employment relationship with the university, startups established at the UNICAMP Technology-Based Company Incubator (INCAMP), and companies whose primary business derives from technology licensed by the institution. “It will operate as a large forum,” says Frateschi. “Companies can provide information about their requirements and establish communications directly with other UNICAMP firms or laboratories. It will create a way to accelerate technology transfer.” 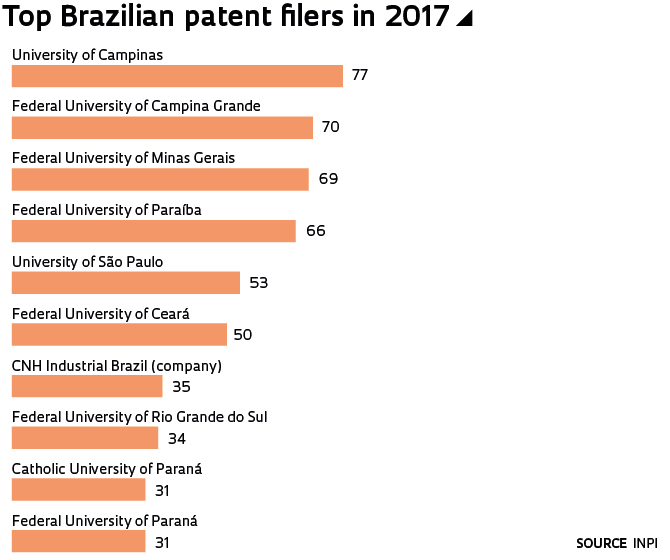 The Department for Technology Transfer & Innovation at the Federal University of Minas Gerais (CTIT-UFMG), which also has a long history of protecting intellectual property, initiated a reorganization process this year to build stronger relations with industry. “We’re setting the department up to operate as a brokerage firm,” says lawyer Juliana Crepalde, an executive coordinator at CTIT-UFMG. The changes, she says, will help to generate new license and codevelopment opportunities. “With the new legal framework supporting new ways of interacting with industry, including universities holding equity interests in companies, our center can be more dedicated to managing technology assets in a structured and strategic way,” she says. “We will also be able to generate technology transfer opportunities through codevelopment agreements involving research teams from both UFMG and partner firms, instead of just operating as a patent filing department,” explains Crepalde. In 2017, license agreements mediated by CTIT-UFMG generated more than R$650,000 in royalties. License revenues peaked in 2015 at R$956,000. One of the technologies that CTIT-UFMG licensed in the previous year is being used to identify fraud in products of animal origin through DNA testing.

NITs have explored different methods of technology transfer. “Part of the role of a university is to produce and transfer knowledge. This can be achieved in different ways and will not necessarily generate royalties,” says Wagner Cotroni Valenti, director of the São Paulo State University (UNESP) innovation agency. According to Valenti, while the university has earned royalties from technology transfer agreements, consolidated information on the amount of revenue is unavailable. The agency has also initiated a reorganization this year. UNESP’s focus will now be not only on patents but also on cultivars and social technologies, or technologies that create (often simple and low-cost) techniques and methods for addressing problems and needs in society. One example is a technology to help waste pickers pull their carts without injuring their spine. The technology was developed by the UNESP Cooperative Incubator (INCOP-UNESP) in Assis and donated to waste picker cooperatives. 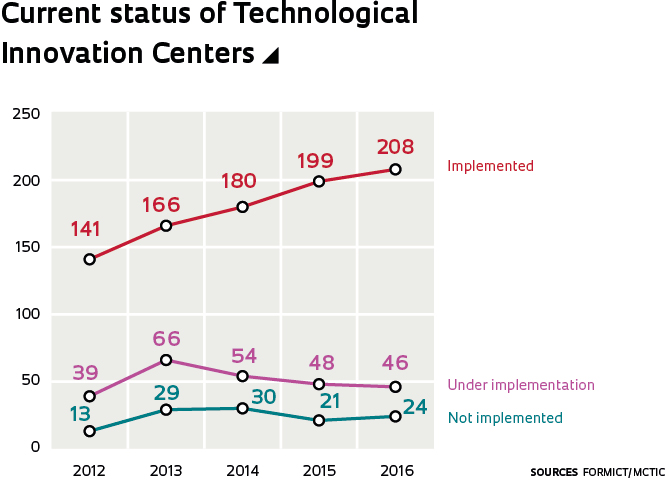 One of the best-ranked education and research institutions for patents filed at INPI is the Federal University of Campina Grande, with 70 applications filed in 2017. Another well-placed institution is the Federal University of Paraíba (UFPB), with 66 applications. The two institutions together filed a total of 136 applications, which is more than that of UNICAMP and USP combined (see the chart). “Although patent filing has increased each year, demand for licensed technologies and processes is still very low,” laments Petrônio Filgueiras de Athayde Filho, CEO of the UFPB Innovation Agency (Inova-UFPB). Created in 2013, the agency has filed a total of 225 patents to date, but none have produced royalties. One of the largest roadblocks, according to Athayde, is the state of Paraíba’s lack of a strong technology park with companies hungry for innovation. “We’re now beginning to incubate startups of our own, and prospecting for partners and companies interested in our portfolio in other Brazilian states,” he says.