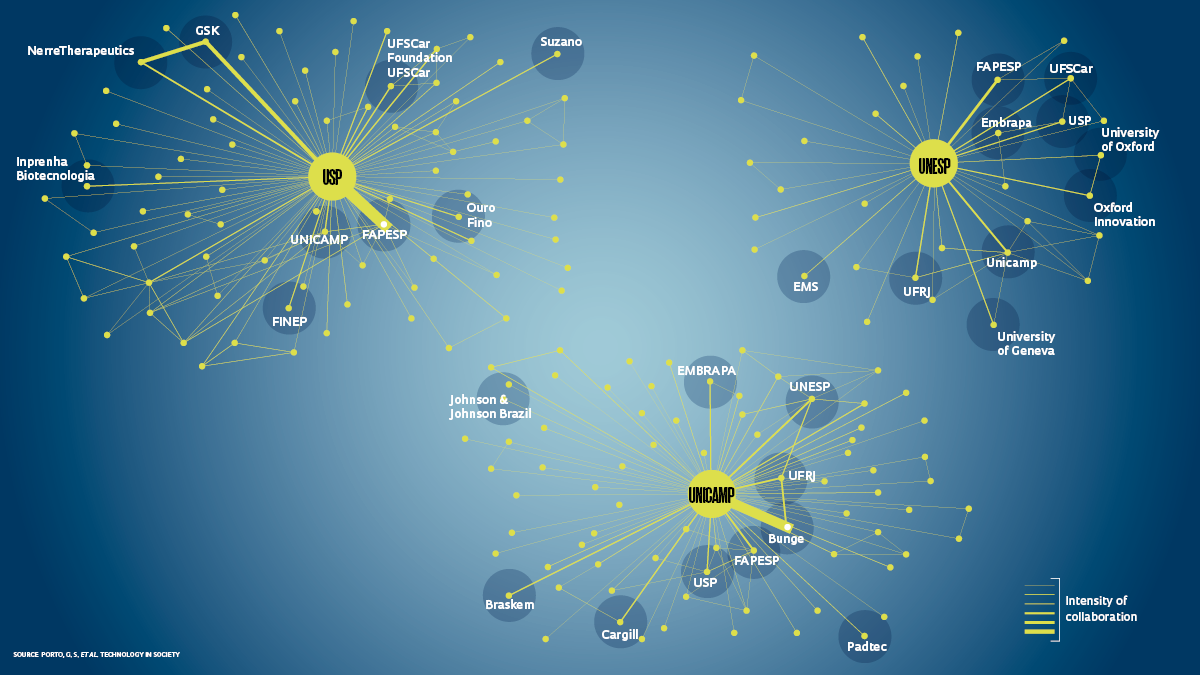 Public teaching and research institutions are one of the primary sources of patent applications in Brazil. This work, however, is increasingly being carried out in collaboration with companies, according to a study that analyzed technological collaboration networks at São Paulo’s three state universities. The authors used data from Derwent Innovations, a research tool that provides access to more than 65 million patent documents worldwide. The group analyzed thousands of patents, selecting those for which the inventors were researchers from the University of São Paulo (USP), São Paulo State University (UNESP), or Campinas University (UNICAMP). They found 2,231 inventions protected by patents before 2017, of which 458 were filed by partnerships—210 involving USP, 173 involving UNICAMP, and 75 for UNESP. “These institutions have managed to form relatively diverse and dynamic collaborative networks in recent decades, which have resulted in applications for intellectual property in cooperation with one or more partners,” says Geciane Porto, from USP’s Ribeirão Preto School of Economics, Business Administration, and Accounting (FEARP), which led the study, published in the journal Technology in Society.

Each institution’s network has different characteristics, both in terms of the number of partners and the diversity and intensity of the collaborations. UNICAMP’s, for example, predominantly comprises companies, at 54% of its 79 identified partners, notably Bunge, which produces vegetable oils for the nutrition and biodiesel markets. The multinational company patented 53 inventions together with UNICAMP in the studied period. Other universities are the next most common partner, accounting for 28% of the institution’s collaborative network. The Federal University of Rio de Janeiro (UFRJ) was the most prevalent, having patented 15 inventions in partnership with UNICAMP. Companies also represented a significant proportion of USP’s collaborative network. Of the 82 partners identified, 45% were companies. The most frequent collaborations were with British companies GlaxoSmithKline and NeRRe Therapeutics, which together patented 44 inventions with USP.

UNESP’s rate was more modest. Its network includes 34 institutions, of which more than half are universities, including the University of Geneva in Switzerland. The authors warn, however, that the data need to be examined with context. “USP is the largest public university in Latin America, it receives the most funding, and it accounts for a significant proportion of Brazil’s scientific output, while UNICAMP has a strong technological profile and is located in an industrialized region with several innovation centers,” highlights Fernanda Basso, an innovation and entrepreneurship mentor at USP’s Innovation Agency and one of the authors of the study. She also notes that it was only in 2007 that UNESP established its Innovation Agency to foster interactions with companies and encourage researchers to patent new technologies. UNESP’s structure, with 24 campuses spread across the state, has allowed the institution to work with companies of varying sizes and from a range of sectors, says Saulo Guerra, director of the Innovation Agency. “We have access to many excellent research, development, and innovation [RDI] hubs, but this also means we need more time and resources to manage all of our 19 technological innovation centers and to meet the demands of all the companies,” Guerra adds.

São Paulo state universities are not the only ones trying to improve in this area. Several other Brazilian universities are attempting to collaborate more with businesses. A survey published by researchers from the Federal University of Rio Grande do Sul (UFRGS) in 2020 corroborated the trend. The group used data from a patent repository search tool called Questel Orbit to map the institution’s collaborative networks. They identified 394 intellectual property applications prior to 2018, of which 124 involved partnerships with companies and other education and research institutions. Brazilian petrochemical company Braskem was the most common partner, with 15 patented inventions. “Companies in the oil and gas industry are most likely to collaborate and cooperate with universities, due to being legally required to invest in R&D,” explains information scientist Rene Faustino Gabriel Júnior, from UFRGS’s School of Librarianship and Communication, one of the researchers involved in the survey.

Many of the results obtained by the universities are down to the work of their Technological Innovation Centers, created to manage innovation policies, which were granted specific legal status by Brazilian Law 13.243 of 2016, dubbed the science, technology, and innovation act. The Federal University of ABC (UFABC), for example, seeks to involve its graduate students in research aimed at solving the specific demands of companies. The institution has two graduate programs designed to stimulate ties with the private sector: a Doctorate in Academia and Industry, and a Master’s in Academic Innovation. “These programs focus on research in partnership with companies, seeking to meet industry interests and demands without neglecting the scientific rigor of academic research,” explains Arnaldo Rodrigues, director of UFABC’s Innovation Agency. The aim is to expand and diversify the institution’s range of partners. “We have a portfolio of 73 patented technologies, 59% of which resulted from collaborations,” he highlights. But only 11.6% of these partners were companies. “We mostly collaborate with other universities.”

The Federal University of São Carlos (UFSCar) has a portfolio of 293 patent applications. Of this total, 180 were filed in cooperation with 41 companies—most with Petrobras. “We try to involve undergraduate and graduate students in all our partnerships with companies,” says Rafael Aroca, director of the UFSCar’s Innovation Agency. He explains that many companies get in touch with the university via alumni working for them, in search of solutions to specific problems. The effort has already paid off, with several successful patent applications filed in cooperation with companies and as a result of technology transfers. One involves licensing the use of sugarcane varieties genetically modified by UFSCar researchers to companies in the sugar and alcohol sector. “These contracts generate more than R$1 million per year in royalties for the university,” says Aroca.

There is a shortage of Brazilian companies capable of incorporating the knowledge produced in universities, says Renato Garcia

According to Ana Frattini, executive director of Inova, UNICAMP’s innovation agency, when it comes to research projects and provision of services, many companies get in touch with the university looking for specific solutions. “In relation to the licensing of technologies, especially patents that resulted from research carried out at the institution, Inova actively contacts companies in the same technological sector as the patents to offer its technologies.” Cargill Agrícola is one of UNICAMP’s biggest clients when it comes to technology licenses. One is Lévia+e, a fat with a low saturated content, used to maintain food structure, flavor, and shelf life.

According to economist Renato Garcia of UNICAMP’s Institute of Economics, while collaborative networks at Brazilian universities increasingly involve companies, the number of intellectual property applications filed together with the private sector is still lower than in other countries. “This tells us two important things,” says the researcher. “The first is that there is a lack of Brazilian companies with internal RDI structures able to incorporate knowledge produced in universities through collaborative projects. The second is that even companies that do have the required structure have been reducing their investment in innovation.” One fact that backs up this assessment, he highlights, is that the majority of companies working with the São Paulo state universities are foreign.

Economist Eduardo Albuquerque, a researcher at the Center for Regional Development and Planning of the Federal University of Minas Gerais (UFMG), believes there is an institutional imbalance in Brazil’s innovation system, with too much pressure on universities to innovate and file for patents. “Universities exist to train researchers and generate new knowledge, and companies exist to create innovative products that allow them to compete with their competitors, ensuring their economic future,” he says. “In Brazil, however, innovation is seen a university objective, when in most countries with well-established innovation systems, it is primarily undertaken by the private sector based on the knowledge generated by universities. It is companies that should be making demands of research groups in academia in their search for solutions to technological problems, not the other way around.” Albuquerque notes that the Brazilian situation is reminiscent of the challenges faced by China in the early 2000s. “China’s public research system was growing in terms of scientific knowledge, but there were not enough companies using the knowledge, so the universities themselves began to found and manage their own companies.”

The situation in China—and other countries vying to become the most technologically advanced economies—reinforces the need for public development agencies to facilitate the flow of knowledge between universities and companies. Geciane Porto’s team identified an example of this in their study, noting FAPESP’s participation in the collaborative networks of São Paulo’s three states universities, especially in USP, with which the Foundation jointly patented 101 inventions prior to 2017. Renato Garcia believes FAPESP’s involvement in these networks demonstrates that public investment in the innovation process also requires the implementation of policies that allow knowledge and innovation to be disseminated throughout all sectors of the economy.

He also says that it having an innovation system with dynamic and diverse networks alone is not enough. “The State needs to help coordinate the innovation and industrial development process, creating strategies and mobilizing resources that enable technological advances in priority areas,” he says. One of Brazil’s most significant initiatives in this regard was the 2004 Innovation Law (10.973/04), which allows the government to foster innovation and competitiveness at Brazilian companies by providing public funding for corporate R&D. “In research carried out by our group by evaluating patent data, we found that interactions between universities, industry, and the government in Brazil advanced substantially after this legislation was enacted,” highlights Bruno Brandão Fischer, a professor at UNICAMP’s School of Applied Sciences, Limeira campus. But this policy is now under threat due to successive federal budget cuts.